Long-term impressions of the Surface Pro 3 and Surface Pro 4 - OnMSFT.com Skip to content
We're hedging our bets! You can now follow OnMSFT.com on Mastadon or Tumblr! 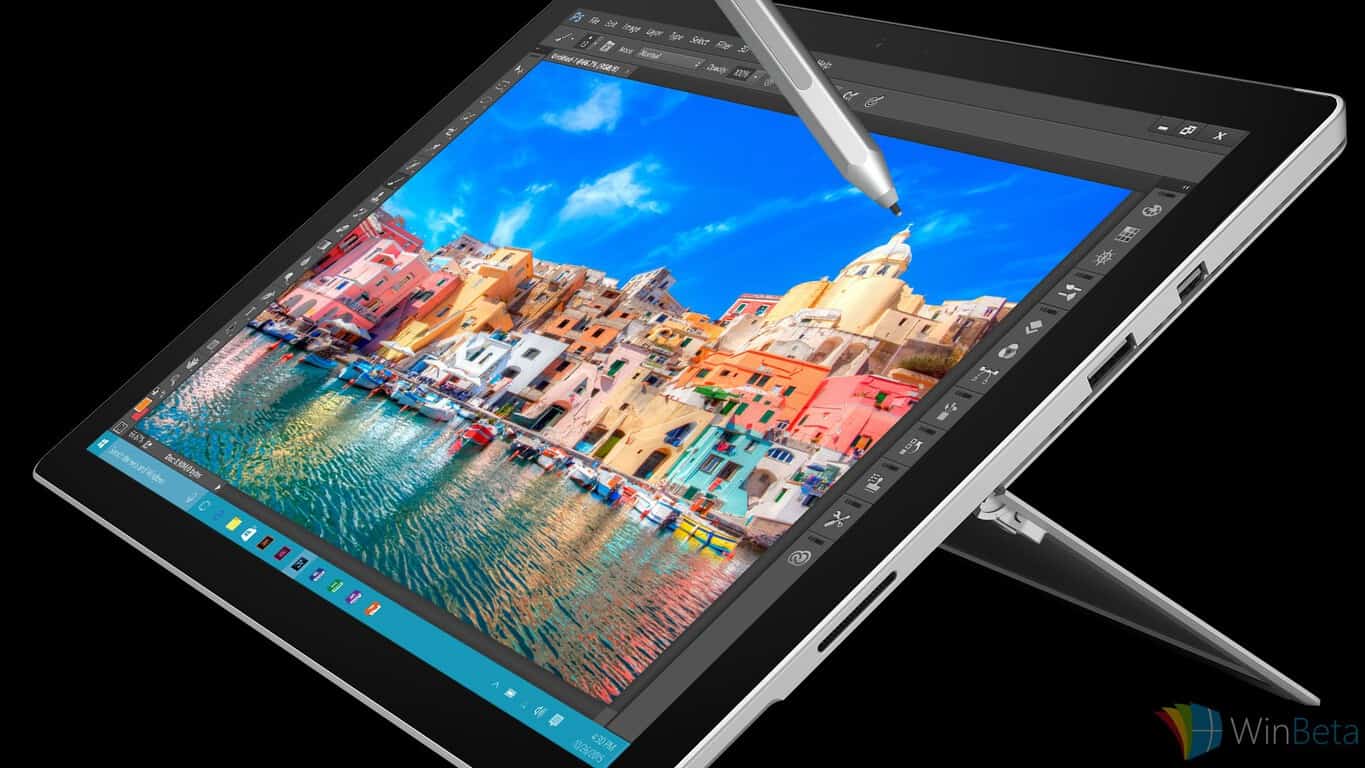 I put in a pre-order on a Surface Pro 3 on May 21, 2014, the day Microsoft first made their third-generation Windows hybrid machines available. I was intrigued by the Surface Pro 3's form factor, its 3:2 aspect ratio and class-leading high-resolution display, and the amount of pure power that stuffed into a very thin and light chassis. Once I stopped by my local Microsoft Store and put my hands on the newly designed Type Cover and discovered I could type on it at full speed, I was sold.

Since then, I've enjoyed the form factor so much that I upgraded to a Surface Pro 4 to gain a somewhat larger and much higher quality screen. In the meantime, I've learned quite a bit about how I use portable machines, and that has greatly impacted my long-term impressions of these very similar generations of the Surface Pro line of Windows 10 2-in-1s.

Perhaps the most significant complaint about the Surface Pro form factor revolves around the concept of "lapability," a made-up word defining how easy a machine is to use in one's lap. Lapability comes into play in a variety of situations, such as lying in bed, working in tight spaces such as airline seating, or any circumstance when you need to balance your notebook on your lap or other unstable platform.

The issue is so important to the market that Microsoft made a video demonstrating how the Surface Pro 3 works well in these sorts of postures (the Surface Pro 4 is identical in this respect):

In my experience, the video is actually fairly accurate. I've definitely found my own methods for propping up my Surface Pro 3 and Surface Pro 4, and can make good use of the machines in pretty much every possible position. I'll admit that there are times here and there when I miss a traditional notebook, but honestly, they're few and far apart.

At the same time, the flexibility of the Surface Pro form factor outweighs any inconvenience. In the final analysis, I'd rather have the option to flip the Type Cover around and use my Surface Pro 4 as a tablet, putting up with some adjustment when using it as a notebook, than not have the tablet functionality available when I need it.

The Surface Pro 3 and Surface Pro 4 have served me well as my go-to portable devices. I use a desktop in my home office as my main work machine, because it affords me all of the storage space and performance that I could possibly need, along with three 24" monitors over which I can spread my sometimes complicated workflow.

The Surface Pro 4 is also extremely good as a unitasking machine for when I have a single important task that needs doing. Certainly, for my primary task of writing, the Surface Pro 4 and Type Cover combination is my overall favorite. The high-resolution, high-contrast screen displays text extremely comfortably, and the Type Cover has an excellent feel. When it comes to the relatively simple task of putting words on the screen, I can use a number of devices--including my iPad Air 2 with Microsoft Bluetooth keyboard--but I'd much rather use my Surface Pro 4.

Of course, the Surface Pro machines are excellent highly-portable options. They're thin, light, and easy to carry. They can be moved around with ease, and are capable of everything I need to do wherever I might be working. As I mentioned earlier, it's the machine I take with me when I hit the road.

The only time I don't use the Surface Pro 4 as my mobile device is whenever it might get damaged. For example, if I'm eating lunch and want to get caught up on my RSS feeds or watch a video, I prop up my iPad Air 2. The reason has nothing to do with functionality, but rather economics--my iPad cost me $600, my Surface Pro 4 $1,300. If I'm going to accidentally spill salsa on a piece of technology, I'd rather it be the less expensive alternative.

Otherwise, whether I'm browsing while watching TV with the family (yes, I'm a workaholic), catching up with my research while lying in bed, going into the hills to get some writing done, or plopping down at a café to use up any free coffee dollars I might have accumulated, I take the Surface Pro 4.

I do wish battery life was better. The five or so hours I get in typical use does limit the machine's portability somewhat. It's not the most severe hindrance for me, however, because my work patterns don't put me away from my home office for longer stretches. Even so, I'd rather be able to plan on an entire workday away from a plug, and can't rely on the Surface Pro 4 in those rare instances when doing might be required.

I mentioned above that I don't like carrying my Surface Pro 4 in instances where it might get damaged. That's not really a knock against the machine itself, but rather my own reluctance to put so much money on the line. Certainly, a traditional notebook feels like it's better protected when you close it up -- the screen is fully hidden behind the lower deck and the screen, and there's no exposure whatsoever. The Surface Pro 4, however, is all screen on one side, and while the Type Cover protects it, the two aren't locked together. Drop the combo, and the screen is very likely to crack.

Mere impressions aside, I've not found the Surface Pro 4 to be particularly prone to damage. The back of the machine remains in good shape even though I often carry it around, with no noticeable scuffs or scratches. The same was true of my Surface Pro 3 after more than a year of use. The one moving part on both machines, the kickstand, remained solid throughout, always holding the machine in its intended position. Finally, all of the various connectors and ports were robust.

All in all, I'd rate the Surface Pro 3 and 4 as surprisingly durable. I'll continue being extra careful simply because that huge screen is exposed, and I'm glad I purchased Microsoft's Complete warranty and accidental protection program because I've smashed smartphone screens before and this one's just a much larger version of the same. But Microsoft did a good job of designing and building a machine that seems to be holding up to regular use.

After a few months of updates, my Surface Pro 3 became a very reliable machine. From then on out, I could probably have counted on the fingers of one hand the number of times I need to hard reboot the machine due to some instability. Amazingly, that included quite a few months operating as a Windows Insider machine. The Surface Pro 3 came with Windows 8.1 preinstalled, and that was a good enough operating system on the Surface Pro form factor. After a few updates, I learned to prefer Windows 10, and up to the time I switched to the Surface Pro 4, I was enjoying a very stable and reliable platform indeed.

Up until a few weeks ago when Microsoft finally released the promised firmware update for the Surface Pro 4 and Surface Book, I wouldn't have given my Surface Pro 4 very high marks in terms of reliability. The machine couldn't sleep reliably, I had all kinds of issues with the display and waking from sleep, and my Type Cover periodically needed to be disconnected/reconnected to work when starting back up from either sleep or hibernate.

Following the firmware updates, however, the Surface Pro 4 has become a much more reliable machine. While I still don't trust transporting in a case without shutting it down, it does sleep most of the time predictably and wakes without issue. When I need to put it in my bag to take somewhere outside of the home office, I simply hibernate it. That's a perfectly reasonable solution, and mimics how I used the MacBook Air that was my main portable system prior to purchasing the Surface Pro 3. For similar reasons, I always shut down the MacBook Air whenever putting it in a case and carrying it around, because it, too, was prone to randomly waking up from sleep and "hot bagging."

I no longer have any Type Cover issues when waking from sleep, either, which is a huge relief. The only real issue I'm having right now is that Windows Hello became a bit less reliable following the update. Whereas it was pretty much 100% reliable, it's now only about 80% reliable -- every fifth time or so, Windows Hello will fail to recognize me and I'll be forced to used my PIN to log in.

Overall, though, the Surface Pro 4 has become nearly as reliable as any machine I've owned. I wouldn't hesitate to recommend it to anyone who needs to rely on a portable machine for their livelihood.

I still think that Microsoft originally created the Surface line of machines to serve as "halo" devices to demonstrate how Windows 8.1 and then Windows 10 are capable of being today's premier productivity platforms. Also, I think that Microsoft also intended to put some pressure on their Windows OEM partners to make better machines to compete more aggressively with Apple's line of MacBooks. Intel did the same with their Ultrabook initiative.

I'd say that Microsoft succeeded on both accounts. The Surface Pro 4 (and Surface Book) definitely highlights how Windows 10 makes for a vastly more productive platform than the fiasco called the "iPad Pro." And, OEMs are making much better machines, led by the likes of Dell's XPS 13 and XPS 15 machines and Lenovo's Yoga line of 2-in-1's. The Windows 10 ecosystem, at least in terms of notebooks and hybrids, is as dynamic and full of high-quality systems as Microsoft could have imagined.

At the same time, the Surface Pro 4 and Surface Book are also selling extremely well, probably better than Microsoft ever imagined. The Surface line is a profitable, multi-billion business on its own, and as a very happy user of a Surface Pro 4, I can see why. If you're looking to buy an extremely well-designed and -built Windows 10 machine that can serve as a highly-functional and comfortable tablet as well as a high-productivity notebook, then the Surface Pro 4 is an excellent choice.

In what's the most pertinent question: would I buy one again? Absolutely, without hesitation. I felt that way about my Surface Pro 3, and the Surface Pro 4 has a display that's second-to-none with even better ergonomics. It's a thin, light, highly portable powerhouse of a machine, and the only machine that's caught my fancy as a possible replacement one day is the Surface Book. In this regard, I've become as big a hardware customer of Microsoft's as I've been a software customer for going on 30 years.

Mad Max and more Xbox One games discounted this week