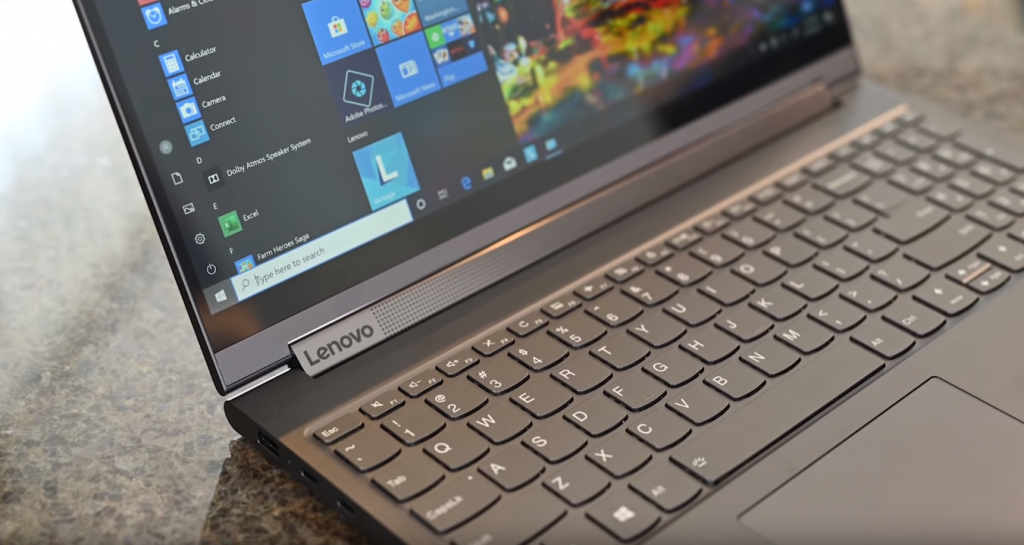 Lenovo is back at it with refinements to its Yoga C class series of laptops. In 2018 Lenovo brought us a Dolby Atmos powered soundbar hinge that put audio at the center of the C930 experience, and in the fall of 2019, the company followed up its C930 with the C940, wait for it, 15-inch.

That's right, the C940 has gotten a screen bump from last year and now comes in a 15-inch variant with much of the same design and functionality of the C930 in tow.

The focal point of the C930 was its impressive new take on a 360-degree hinge. Lenovo did away with its standard 3-point double bracketed 360-hinge, or the patented "watchband" setup and instead opted for a single triangular soundbar able to output evenly in various configurations. In 2019, Lenovo managed to pack more battery and a larger screen into the 940 while adhering to the same winning design of the C930. In the end, anyone loving the C930 but reliant on 15 and 16-inch model laptops to be productive, have now had their wishes come true.

Back in 2018 when I reviewed the C930, I found the sound experience to be outstanding for a laptop.

As a small anecdotal comparison, I normally have to turn the volume up to 60 (using Microsoft’s proprietary volume controls) or beyond on most devices to achieve what I was easily able to at 35 on the C930. The sound never became distorted or whispy when listening. Lenovo has done a great job at producing really clear mids with this speaker as well as offer solid bass performance without it edging into an artificial hollow territory. The sound on the C930, in my opinion, has more clarity than on the Surface Laptop, more base than the latest MacBook Pro, and is more robust in sound than any other laptop on the market.

In 2019, the experience remains the same. The C940's soundbar contains a similar two tweeter, down-firing woofer, and a vibration buffering set up that produces bigger and less tinny sound when watching Netflix or listening to Spotify. While I typically listen to Podcasts during my day, there are occasions where the C940 15-inch served as my office radio for a more eclectic listening experience. 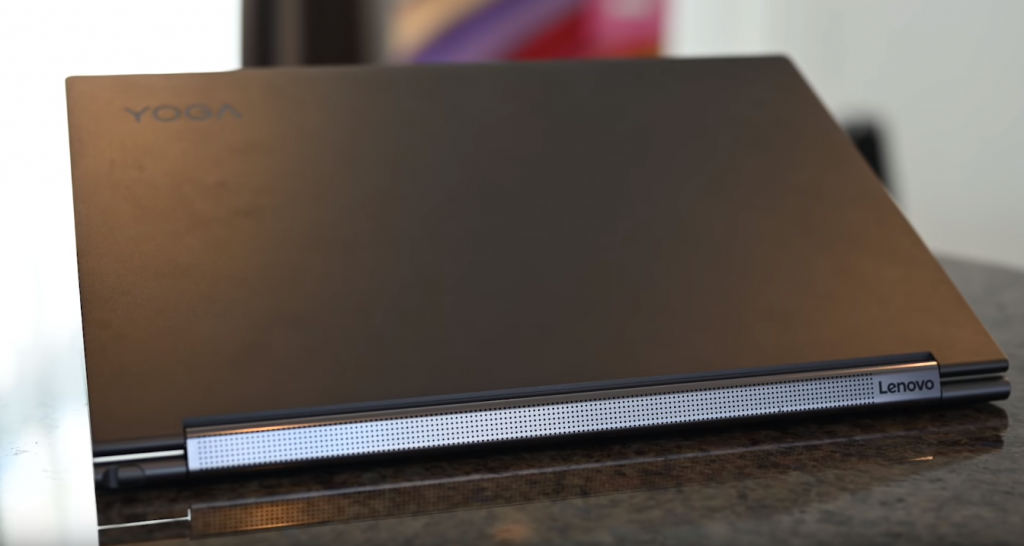 While many reviewers have compared and awarded the listening experience to Apple's new 16-inch Macbook Pro, I still find the sound of the C940 to be preferable in my anecdotal review. While the 16-inch Macbook Pro does handle bass a bit better than the C940, Lenovo's offering offers a less muddled sound than the Macbook Pro, in my opinion. The C940 consistently produced cleaner and fuller sounds in the high and mid categories.

However, Lenovo isn't attempting to just sell the C940 15" as a standalone speaker.

At a little over 4lbs, the C940 comes in considerably heftier than its predecessor and its competition in the market outweighing the Macbook Pro by almost a pound and the Dell XPS by 3/4's of one.

However, the extra weight comes with a 69-watt hour battery capacity which enabled me to get roughly 8 hours works days out of the device. With the C940 pushing a 4K VESA-certified DisplayHDR panel with "ultra-narrow" bezels at 500 nits at 15.6-inches, the extra battery capacity was appreciated day in and day out during my review.

According to Lenovo's website, the brightness level of the C940 could produce up to 50% brighter outputs than standard SDR displays; I did not notice that much of a difference between brightness on the C940 and the C930, to be honest. 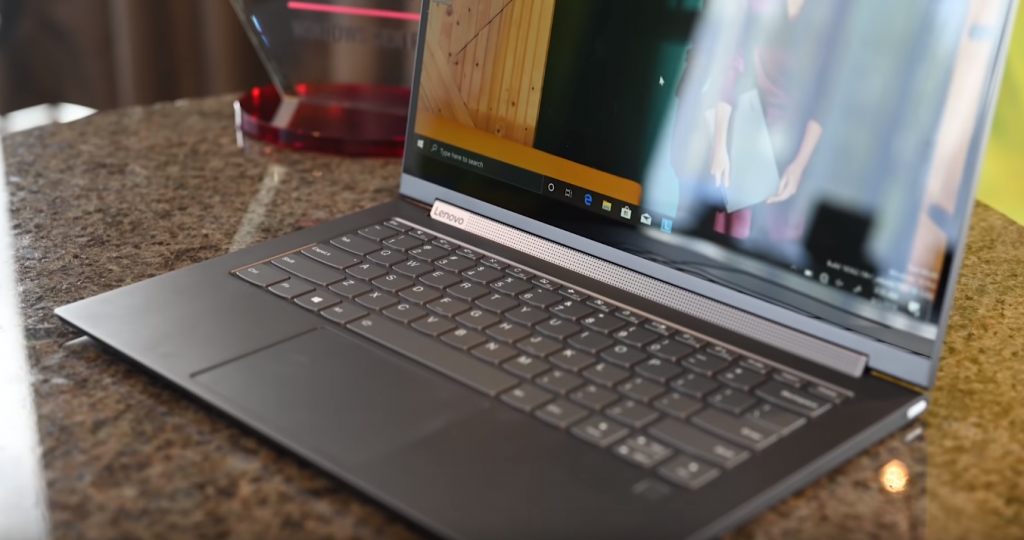 Unlike the C930 2018 model, the C940's finish feels less refined with sharper edges around the lid and keyboard deck amongst the noticeable differences. The C940 does adhere to the smooth aluminum unibody finish as its predecessors and also comes in an identical muted dark grey color.

At the top of the C940 is the etch branded webcam lip that enables users to ideally, pop open the lid with a single finger while also creating a cut out to put a 720p webcam into, without sacrificing space for a thinning bezel profile.

At the end of the day, the C940 15-inch should be used more as a desktop replacement than a true portable 2-in-1. It is neither light nor 2-in-1 friendly thanks to the increase in screen size. One-handed use was almost entirely out of the question for me, but where it makes up for its deficiencies as a 2-in-1, is in the specs department.

With a 9th generation Intel Core i7-9750H and up to six-core 45-watt CPU the performance was excellent. I was able to fly through download and upload of Power BI reports, Excel Docs, large PowerPoint presentations and even run a few machine learning test in a VM environment before exporting the data to Azure in under 3 mins.

I'm not a videographer, so I can't relay the reads and writes speeds of encoded video to and from the device, but for the rest of you, multiple Chrome and Edge tab usage combined with a few proprietary work and web apps all running on a relatively stable Fast Ring Insider build went mostly unnoticed (which is a good thing.)

However, what didn't go unnoticed was the fan.

Routinely, the C940 would blast past 45 decibels as it roared to life like a jet engine on Windows 10 build installs, battery charging, torrent or content downloads and more. 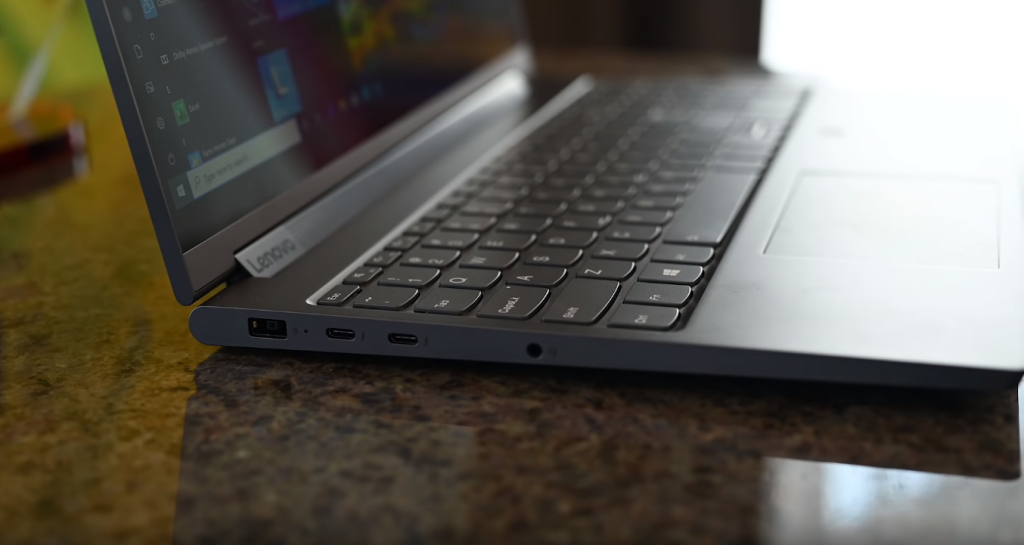 With that being said, whenever the device was lapable, it maintained an even temperature while the fans pumped out warm air in multiple directions.

Instead of standard integrated graphics, the Yoga C940 15” is equipped with NVIDIA’s GTX 1650 with Max-Q graphics. Apparently, this is to help further boost the performance capabilities of the device.  While thermal management is one of the biggest engineering challenges with high-performance laptops, NVIDIA’s Max-Q graphics cards address this hurdle by striking a balance between thermal output and performance, for the most part.

The Max-Q technology targets the peak efficiency of a system and is supposed to intelligently limit the power ceiling to avoid generating too much heat.

On the whole, it works as advertised, for short bursts of gaming.

As with the C930, the C940 also comes with Lenovo's rechargeable Integrated pen in its very own dedicated slot on the device. Flipping the device over reveals a slot on the bottom half of the laptop.

Sadly, Lenovo is doing away with the Pen's springboard mechanism and instead, users will need to use their fingernails to pry out the pen. The Integrated Pen maintains the same 4K pressure and sensitivity points which make for a great low latency writing experience. I was able to make a few doodles and jot down some notes with the pen, but not much more. 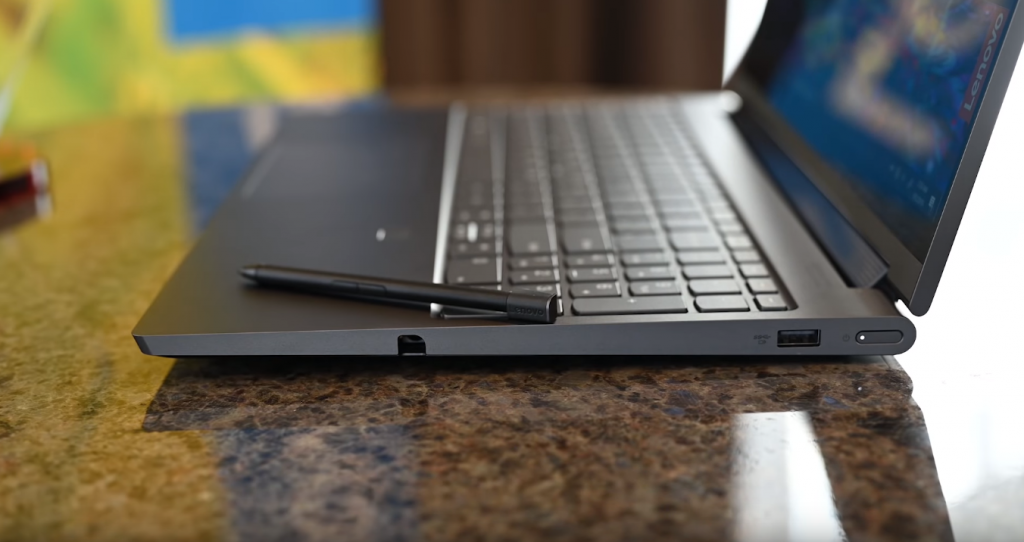 As with most new Windows 10 PCs, there are bio authentication methods, namely the fingerprint scanner, as an IR camera was seemingly left out of development. While a bit maddening for someone coming from a Surface or Dell XPS, the shortcomings of doing without IR blasting and retina recognition is easily conquered after a few days of handling the C940.

What I couldn't get over was the keyboard and touchpad set up. I get that this is a beast of a workstation and I appreciate the numeric keypad being addressed and built right into the device.

However, shifting over the mousepad to one side was something I never really got over. I continually wanted to reach to the center of the C940 to move and navigate objects onscreen and had to take an extra beat to remember to shift my hand placement over.

Perhaps, for ergonomic reasons that align with the inclusion of the numeric key configuration but it was an experience that rang a sour note during my testing. 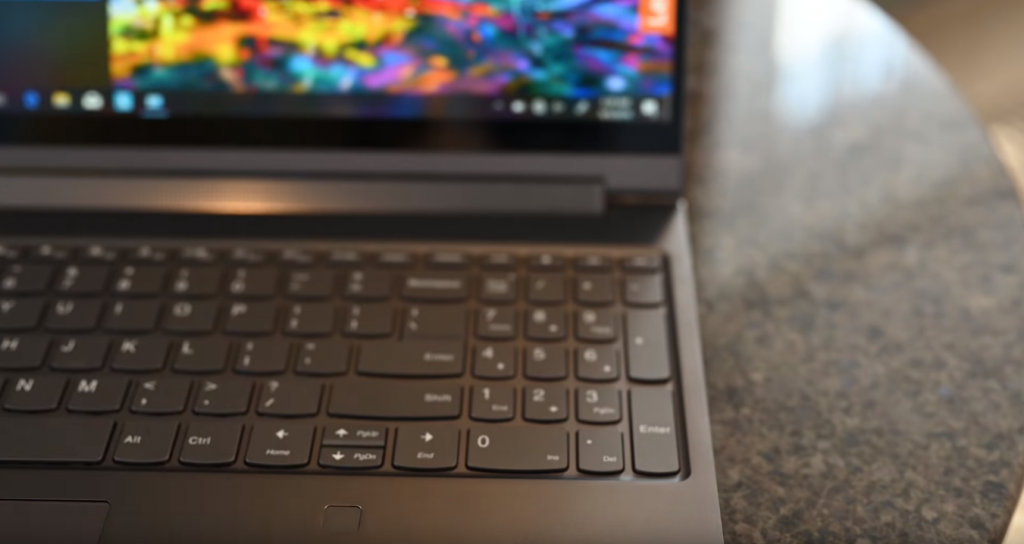 Along with what I think is a misplaced keypad was the tactile feel of the keypad, that, after months of use felt out of alignment with the rest of the palm deck. The left-clicking area remained repressed and sunken under the ridge of the trackpad mount. Clicking the trackpad was mostly a fine experience but there were occasions where clicking it either resulted in wildly inaccurate responses or no responses at all.

In the end, Lenovo pushed out a refresh of the Lenovo 930 with a slightly larger 15.6-inch screen, heavier build design and famed rotating soundbar hinge. The specs are up to date and will remain relevant for the foreseeable future. However, the convertible 2-in-1 design seems wasted on the C940, due in part to increase in size and weight. When spec'd out to the max, the C940 is probably best served as a portable desktop option that occasionally makes it off the desk and into a living room, board room or conference room.

Anyone who wants a premium 15-inch plus laptop that checks off the fundamental features of a modern desktop workstation. Decent battery life, larger more vibrant screen, latest Intel chips, included pen, bio authentication and a sound experience that is second-to-none on anything that isn't a dedicated speaker these days.