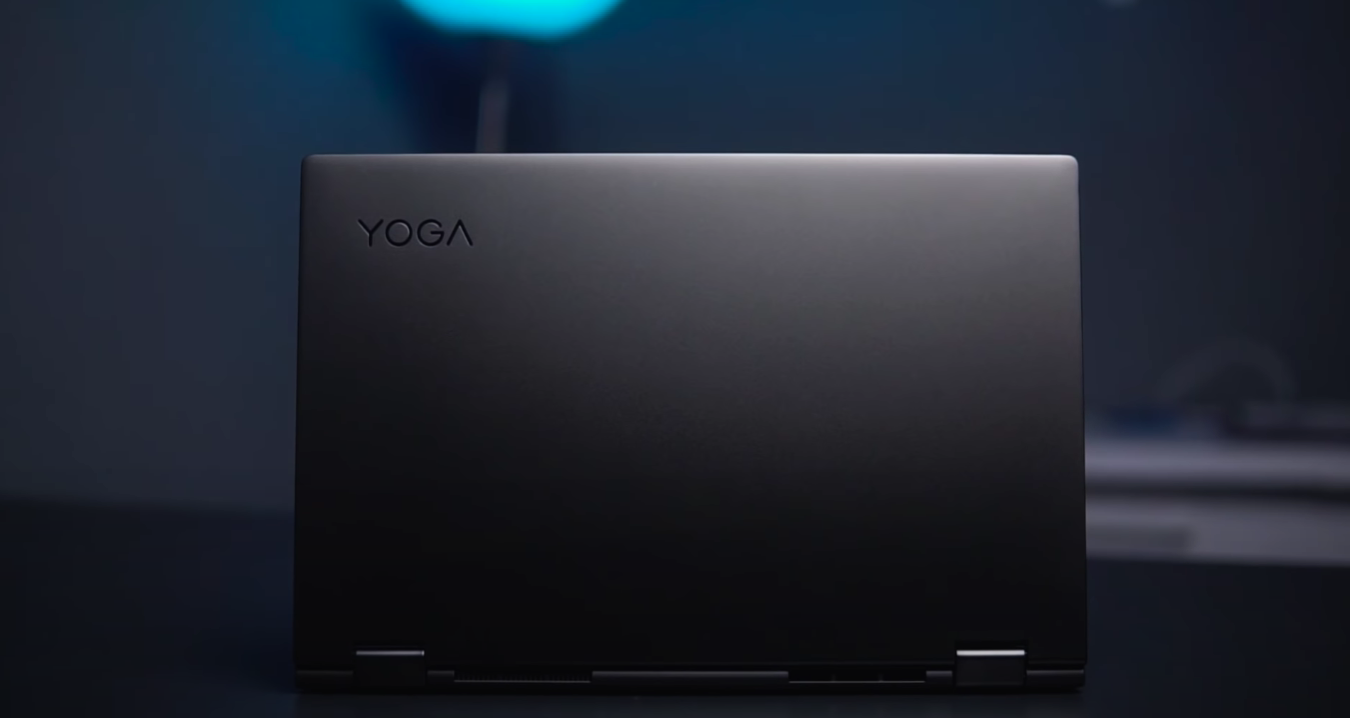 Back in 2018, Lenovo unveiled the Yoga C630 as a cutting edge ARM-powered concept device equipped LTE connectivity and a Snapdragon 850 processor.

Interestingly enough, Lenovo followed up the C630 with a more conventional Intel-powered C640 in 2020 that forgoes LTE and replaces the loss with a much more processor-intensive Comet Lake experience. Lenovo hasn't publically disclosed the reason for its Intel retrenchment for the C600 line up but the trade of LTE connectivity for all-day battery life and processing-power during an unprecedented work-from-home wave seemed like serendipitous timing.

A lot of the same

Plainly put, the Lenovo Yoga C640 is roughly identical to the C630 down to the same I/O setup from two years ago. The C640 comes in a bit thicker than its predecessor at 2.98 pounds and about 0.141 inches thicker than last year.

Lenovo has once again chosen to die on the 16:9 display aspect ratio hill, but the C640 manages to shrink the chin bezel on the device a bit to offer a slightly more immersive viewing experience than on the C630. The casing of the C640 has also been tweaked ever-so-subtly with the C640 replacing its former aluminum and magnesium alloy body combo with a more rigid aluminum and fiberglass combo this time around. 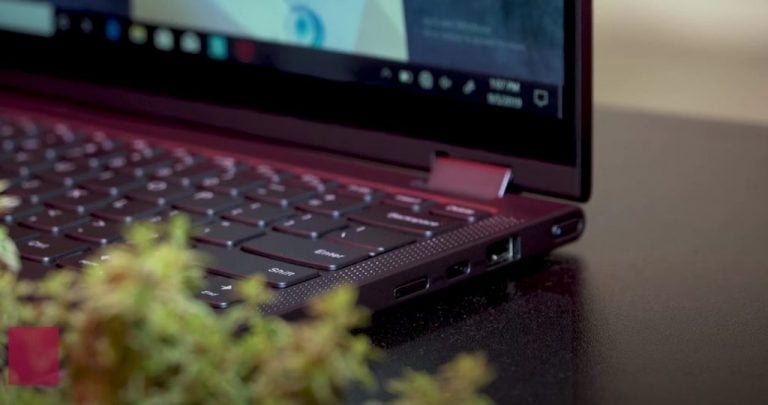 The typing experience on the C640 feels identical to the C630 if memory serves with excellent springiness and response from the iconic U-shape chicklet keys. The keyboard offers a full and expansive typing experience with full-size shift and enters keys that are becoming commodities on some devices. However, Lenovo has annoyingly chiseled away again at the direction keys that sit below the shift key and combined them into basically a three-point footprint button with little space or distinction between up and down keys. 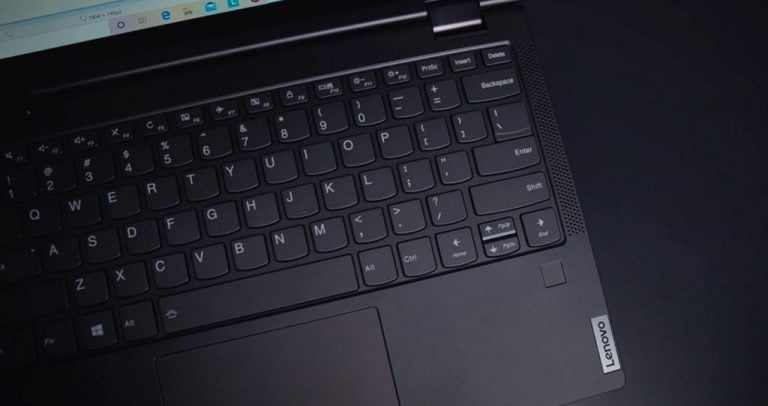 Once again, Lenovo followed a tried and true mold for both speaker experience as well as bio-authentication down to the treble boosted tinny sound and Windows Hello supported fingerprint reader. Not much has changed from either of those experiences for better or for worse, both are convenient and serviceable when used.

The webcam experience on the C640 is still relatively maligned and capped at 720p inexplicably. but it served in pinch for frequent video conferencing during a heavy work-from-home schedule.

As I mentioned earlier the display aspect ratio remains frustratingly intact at 16:9 rater than 3:2 or even 16:10 but there are options for FHD and 4K with touch support configurations.

The display was perfect for my mediocre number-crunching days spent flipping through Excel docs and Google sheets chalked full of budgets and formulas. For the times I got the test the sRGB and AdobeRGB calibrations creating display ads for clients, I didn't notice anything off. My only real concern was brightness during working nights, I would have preferred a panel that pushed out more than 200-something odd nits versus the lighthouse blinding display on the Macbook Pro at close to 400 nits. 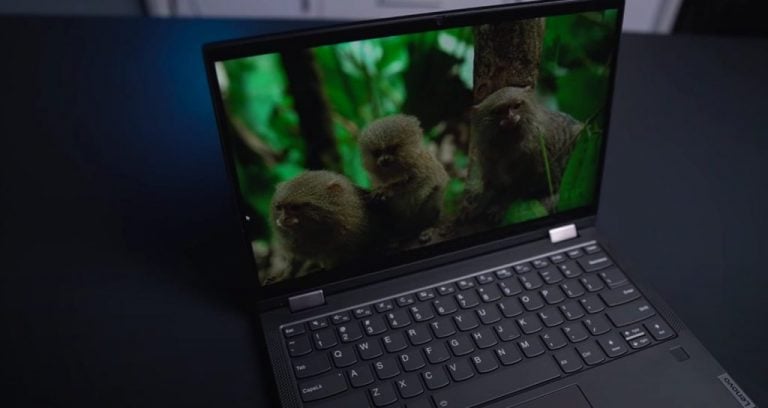 The C640's predecessor in the C630 was known for its long battery life and despite going back to the battery challenged chipset development from Intel, this year's  Yoga consistently provides best-in-class longevity. I didn't run any fancy benchmark software but I did make a conscious effort to keep track of time away from the plug and the C640 routinely lasted about  7 hours of heavy usage (Photoshop, 12-18 Chromium Edge tabs, Google Ads/ Google Editor software, two to three Excel books open with Macros, Outlook and Teams running and Spotify)  and almost 11 with moderate usage ( YouTube, Twitter, Chromium Edge, CBZ reader, and Spotify).

Speaking of battery life, the C640's new switch to Intel's 10th Gen Core i3 processor came with a noticeable speed boost in the opening, closing, and resuming of applications and webpages for the C640. Windows still needs to tweak its WOA platform for better native performance and utilization of GPU rendering and this may have been the impetus for the move back to Intel for 2020. Going through my full workload hours on end, it was rare that I run into issues, and I believe many of the ones that I encountered were mainly as a result of my Insider testing wrought with bugs these last few builds.

Anyone looking to upgrade their home office.

Thanks to stay at home orders during this COVD-19 pandemic, I was able to put Lenovo's C640 through its paces as a daily driver without having to split time between a home office and office-office settings. Instead, the C640 served as my main computer from eight in the morning until eleven or so at night.

At roughly $750 bucks, the Lenovo C640 is a great mid-ranger posing as flagship and would be a steal for anyone looking to replace their currently aging home office. With an FHD or 4K touch display, all-day battery life and modern specs that include Bluetooth 5.0, Wi-Fi 5 connectivity, and USB-C ports as well as and 10th Gen quad-core Intel-powered chip, the Lenovo C640 is a buy if you can get your hands on one.