Lenovo Yoga C630: A promising future on an interesting evolution 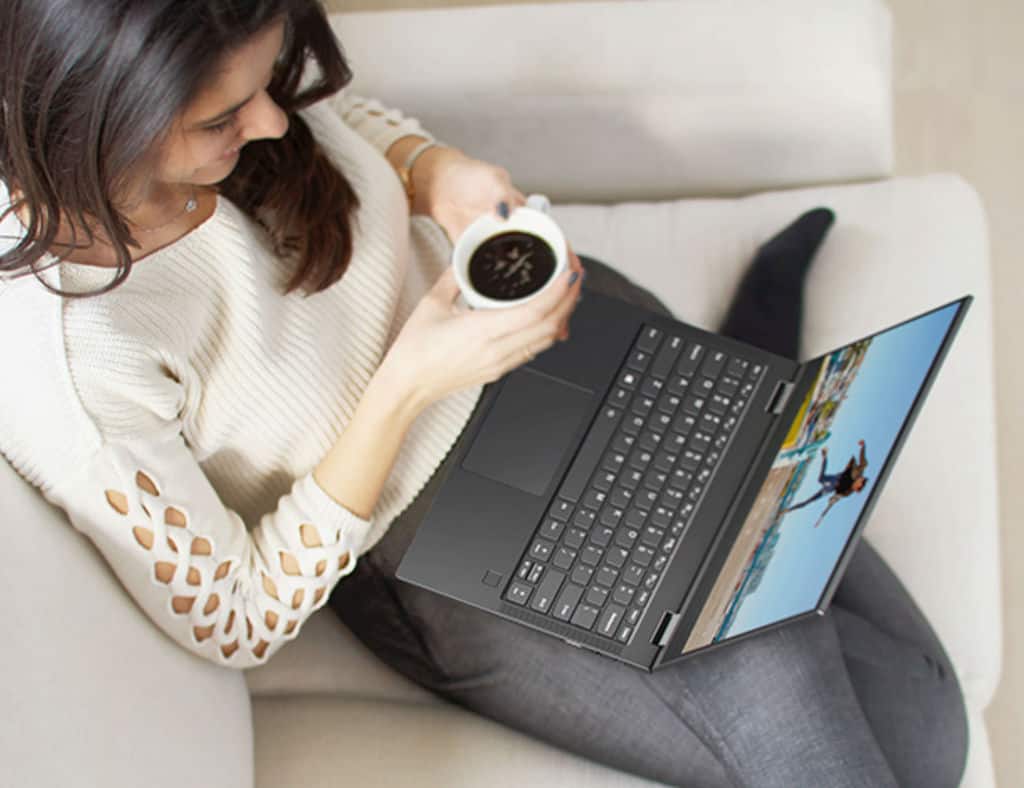 In a world where smartphone usage is encroaching on the certain feature set that used to insulate PC manufacturers from the worries of cross-blend computing cannibalization, it’s become paramount that OEMs find a successful pivot that will allow them a softer landing as the industry floor continues to seemingly eroded from underneath them.

Enter Windows on ARM and the push for Always Connected PCs. 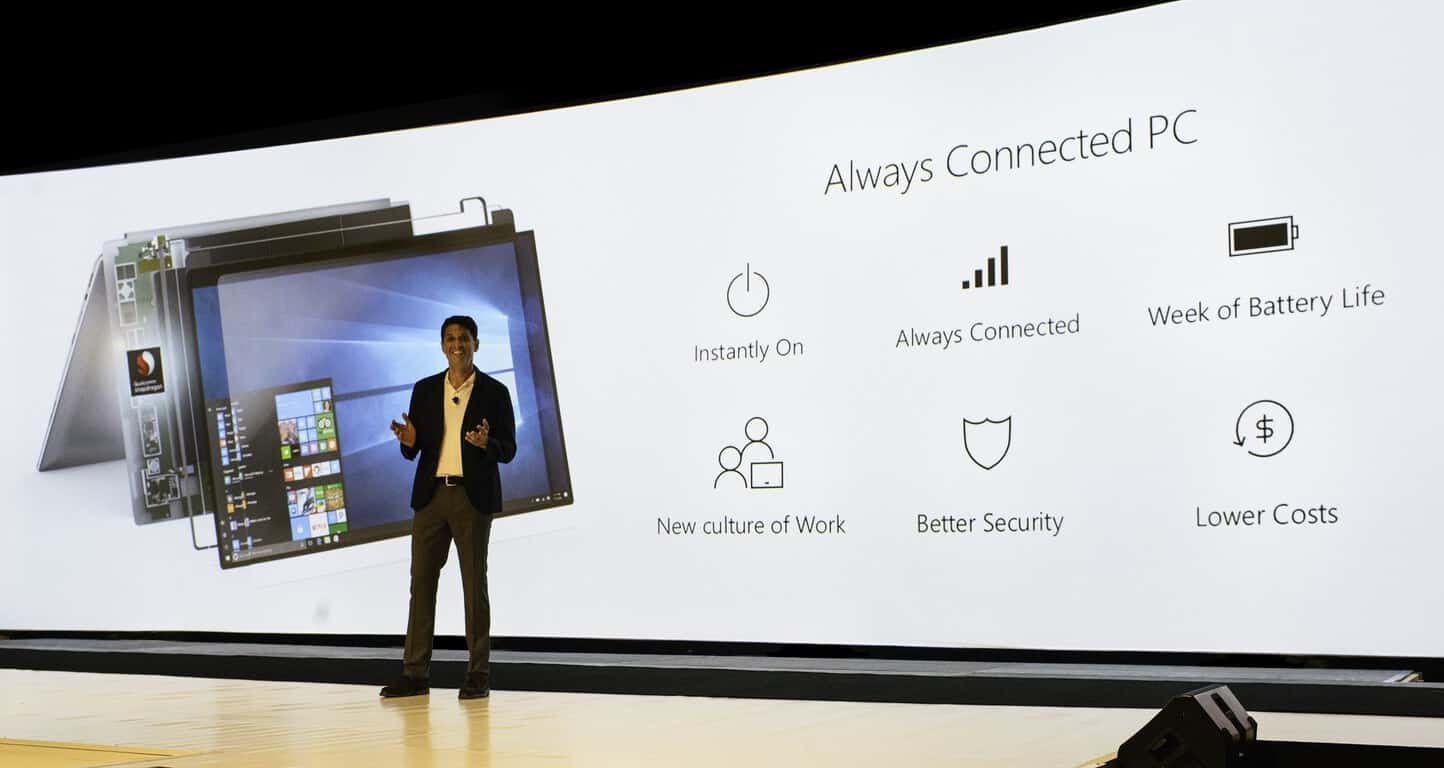 The zero-sum narrative bandied about by some tech journalist that pits smartphone adoption and consumption against the productivity aspects of laptops and workstations has some teeth, but the reality is that a large majority of people prefer to make use of a smartphone in conjunction with a dedicated PCs of sorts, whether that be an iPad Pro, Surface Pro, or a more traditional laptop or gaming tower.

However, there appear to be telemetry OEMs are seeing that indicate that people would like their PCs to behave more like their smartphone and other mobile devices. The demands for longer battery life, instant-wake functionality, speedy startups, and a steady and consistent connection to the internet regardless of location are at the impetuous of the Windows on ARM hardware and the new Lenovo Yoga C630, not to be confused with the C630 Chromebook. 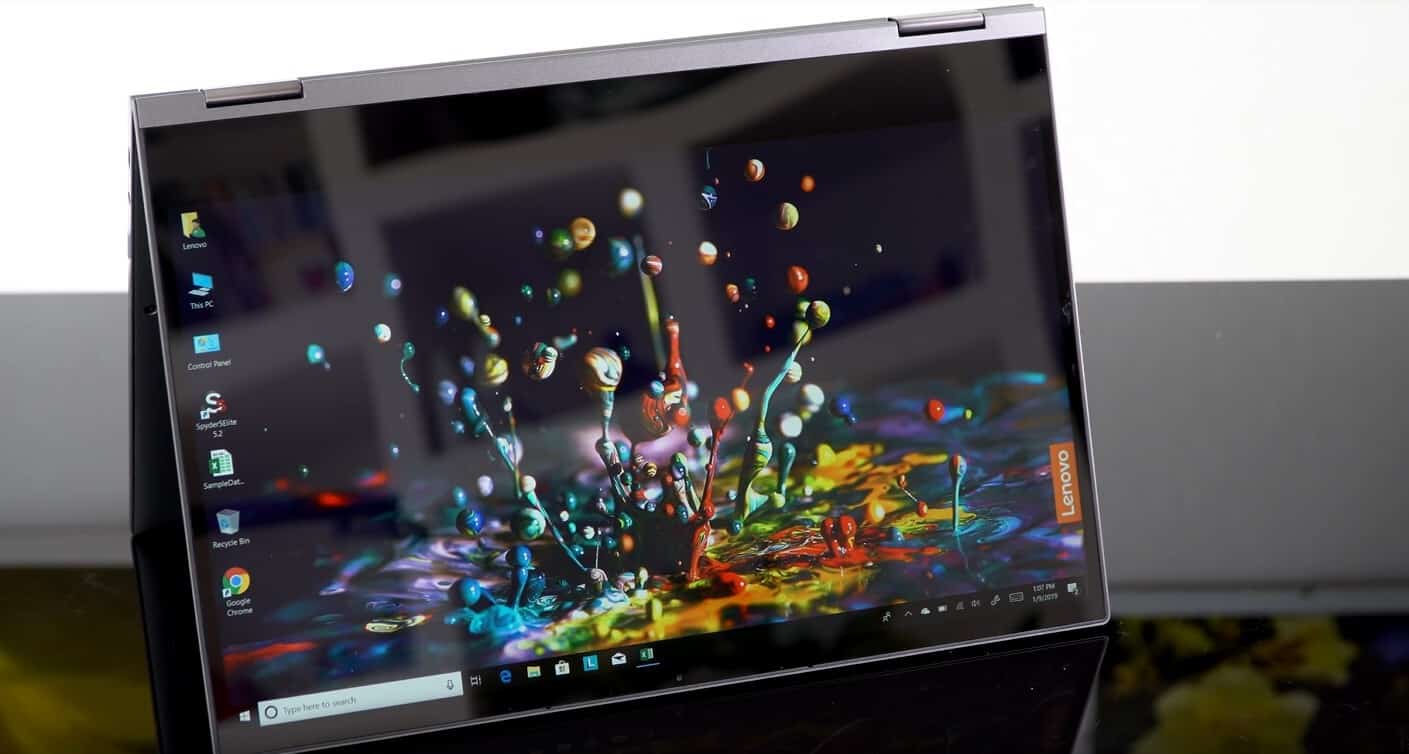 While I like to put out reviews in succession similar to an episodic TV series, I actually reviewed the Lenovo Yoga C630 before I did the Lenovo Ideapad 730S. I got the C630 late last year in December 2018, but it has taken me some time to put my thoughts into a review that best describes the what and the why of this device.

As most laptops come with the standard array of feature sets and trimmings these days, I like to review units based on the company’s own pitch to the customer. The Lenovo Yoga C630 actually makes several pitches in its marketing efforts such as All-day battery life—and more, Constantly connected and WiFi with a capital whoosh!

To Lenovo’s credit, it delivered on one of the three claims consistently in so far as All-day and more battery life.

However, being constantly connected and its superior WiFi claims fell short more often than I would like.

The Lenovo Yoga C630 was my favorite PC to use in 2018 simply on its battery life alone. While PC OEMs like to inflate their battery claims, and the C630 is no exception, this laptop consistently provided all-day battery life for me. My day starts roughly at 5:30 am with some light web browsing as I check Google AdWords and CRM tools for metrics from the previous day.

I then, move into casting podcasts onto my Invoke (I know, I’m one of two people who have one) for roughly an hour as I get ready. I then close my laptop for 30-40 mins while I make my way to the train, where I then open it up to check news, social media and YouTube for the duration of my 28 mins train ride.

Close it again as I make my way to my office. For the next eight hours, I used the laptop non-stop for work consisting of Skype meetings, Teams communication, various Office 365 applications multiple Chrome and Edge tabs, PWA Twitter app and Pocket Casts.

It wasn’t until my ride on the train home that I had to worry about the dimming screen and the laptop slipping into battery mode, and while that’s not literally all-day, in the world of Windows-powered PCs, 14 hours of steady use is about as close as it gets.

Here is where the laptop began to falter a bit. My test unit graciously came with a Verizon 4G LTE sim that I intended to put through the paces. To its credit, the C630 did a relatively seamless job of switching to from Wifi to LTE, not so much on the switch back.

My daily train commute offers me a chance to jump onto public wi-fi to get some last minute note taking or account management done, but I am at the mercy of poorly concocted implementation. Often the wi-fi drops out and I’m forced to hotspot from my Note 8. With the C630, the connection process was a bit better.

Perhaps,= it was just Verizon’s coverage along the Tri-Rail route going from Pompano Beach to Hollywood FL that was the culprit, but often I found that the SIM had connected to LTE but produced relatively weak connections resulting in a hampered Always Connected PC experience. When I was work, I attempted to ‘cold turkey’ work using only the LTE sim and the results were mixed. The experience proved not as fast as my work’s wireless solution but better than not having any option at all; files downloaded slower, web pages took an extra tick to load and there were several troubleshooting prompts that cluttered my Action Center throughout the day. 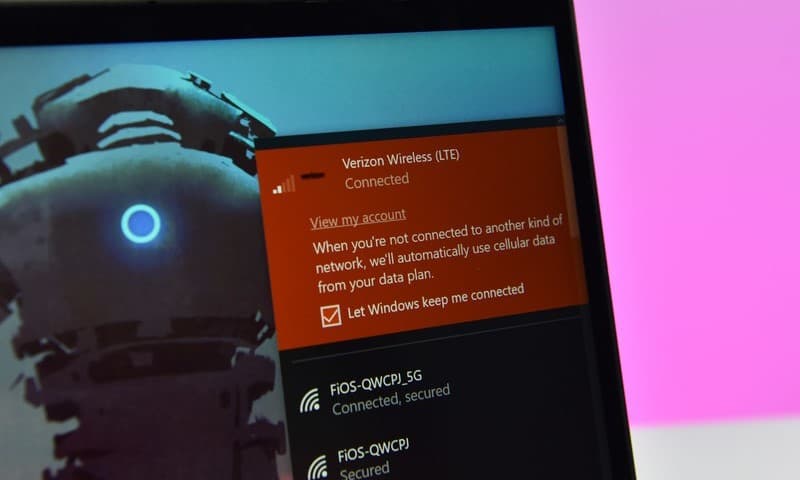 Again, I don’t believe this is all Lenovo’s fault, but a confluence of how Windows handles LTE as well as Verizon’s coverage of the Pompano Beach, Ft. Lauderdale, and Hollywood areas.

As much of the sale of the Lenovo C630 depends on it being a device that is Always Connected, it’s a buyer-beware instance rather than a foregone conclusion. While the C630 may suffer from inconsistency, it’s offering an option that few PCs on the market do.

WiFi with a capital whoosh!

It seems like a corny marketing claim to push but I’m sure its one Lenovo’s Qualcomm partner would like to seed to the industry. Much of my review of this claim is tied to the Always-Connected pronunciations from earlier where Lenovo champions it 4G/LTE experience and the Qualcomm 850’s ability to produce connectivity speeds of up to 1.2Ghz or roughly 7x average broadband.

The C630 was able to connect to 4G/LTE near and around my house relatively well and on a trip to Orange County California, the internet connections were decent. However, I’m not sure it’s Verizon or the Snapdragon that would throttle connective performance, and I often would drop from a relative five bars to two and three. In turn, my productivity would take a hit whenever those instances of degraded connectivity would occur and they happened more often than I would like.

As I mentioned earlier the margin between design and feature sets is becoming slimmer as user preferences have settled on grey-slabbed 12-14 inch boxes. There are iterative design changes that help inch the industry forward such as thinner bezels, options of 1080p or 4K resolution screens, minute keyboard tweaks, speaker, and port availability and the C630 splits much of that check down the middle.

The C630 is another refinement on the Lenovo’s cast grey slab offering with a cool to the touch aluminum brushed chassis and impossibly thin design. At just 12.4 mm/ .5″ it’s one of Lenovo’s thinnest designed laptops and weighs just hair over 2 and a half pounds. The C630’s design inspires mobility and travel as it fits comfortably in all the laptop sleeve and backpack compartments I tested. 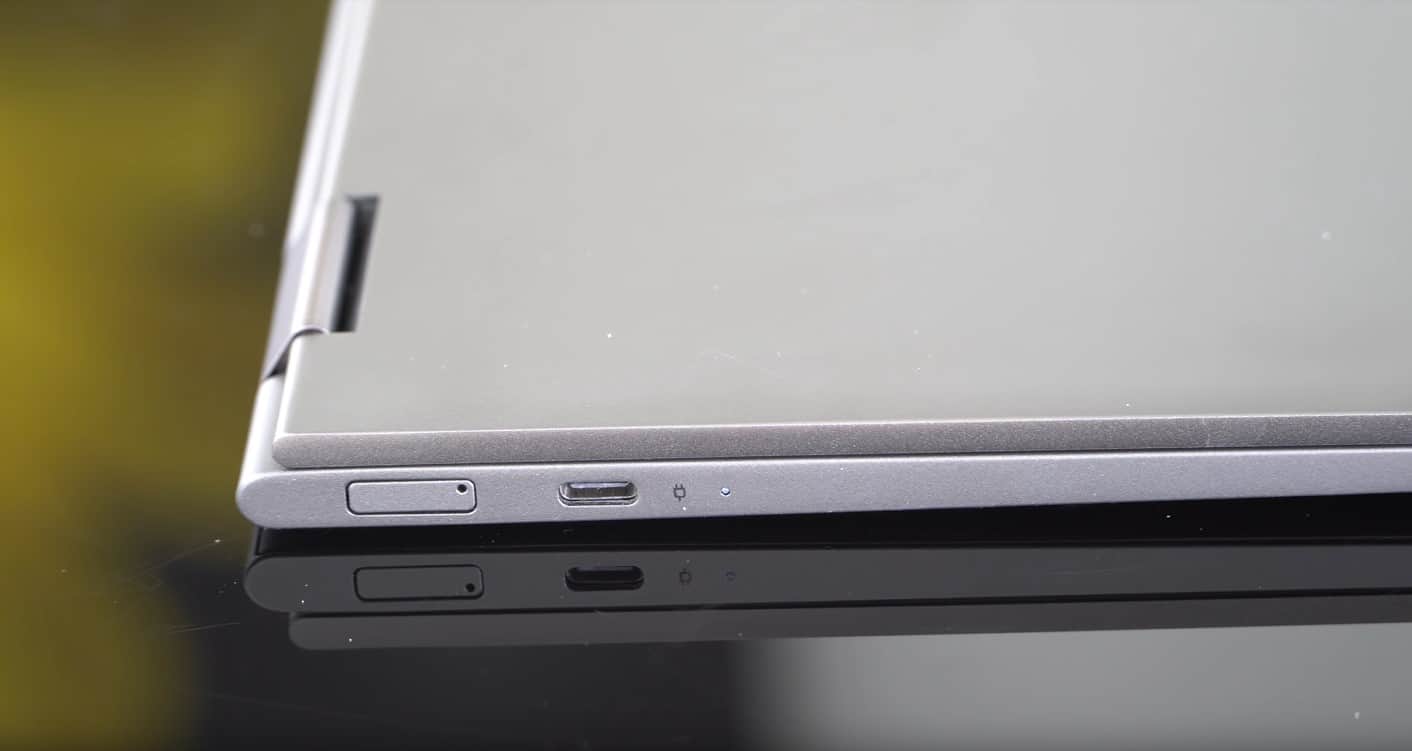 As a multi-fold converting laptop, the minimalist weight offered the most natural implementation of large-screen tablet use outside of the iPad Pro, Surface Pro and Surface Book I’ve experienced yet.

The screen on the C630 unit I had got plenty bright but lacked any jaw-dropping characteristics with its FHD multi-touch display.

However, a cool little kicker to the modest screen tech is the support of Microsoft’s N-Trig technology which allowed me to test pen input despite not having one come with the unit. There was some lag but for note taking or webpage edits, it serviced rather well.

There is a two-stage lit keyboard centered in the C630 that offers relatively shallow key travel but a familiar feel with its chiclet-style key design. 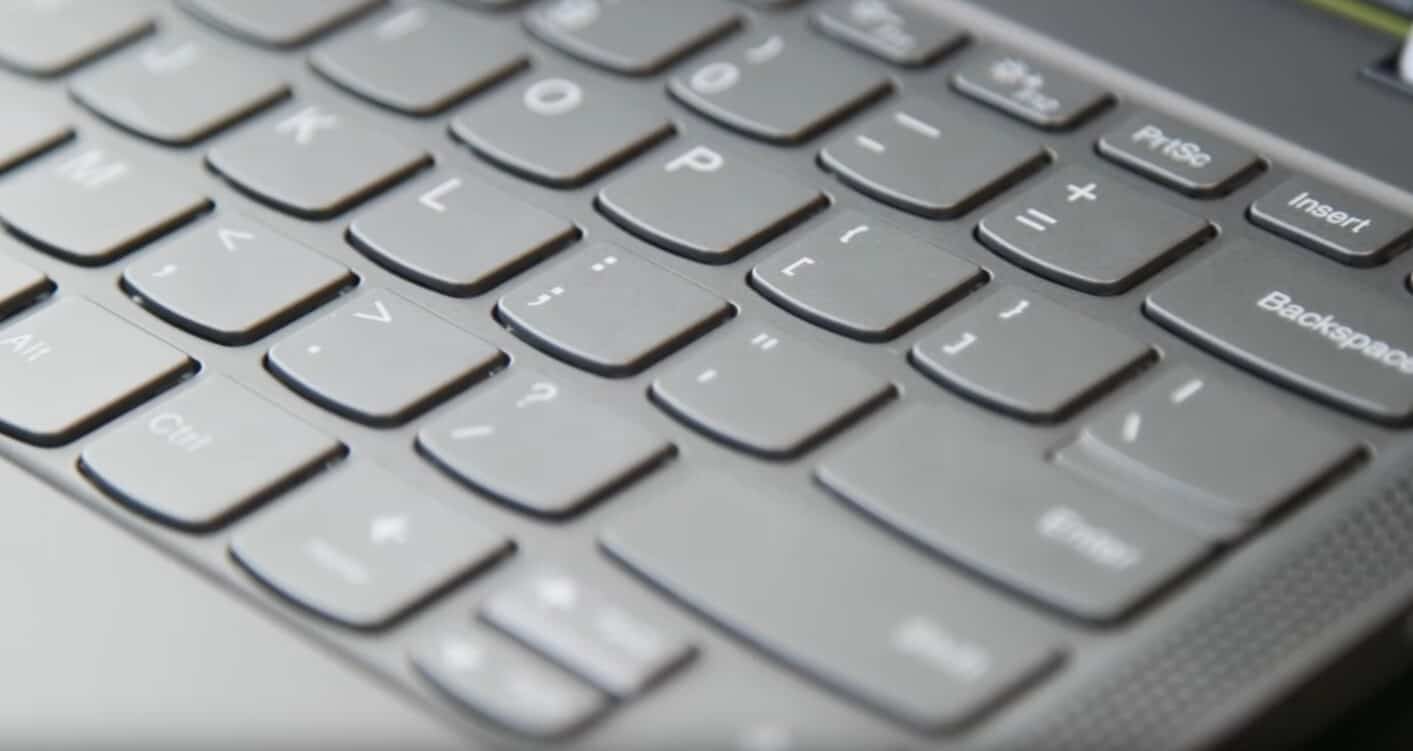 Top firing speakers on the Lenovo C630 are a pleasant surprise and give the device a sort of MacBook fill as the speaker grills flank at 2/3 length of the keyboard.

As is becoming customary with most Lenovo’s there is a shallow finger printer reader off to the right of the keyboard that did a decent job of authenticating. There were times when the sleep/wake state of the laptop threw off the reader and I found myself jumping to pin rather than fight the system asking for me input my fingerprint, over and over.

As there are no real games in the Microsoft Store designed to push the limits of a Qualcomm chipset, I saved the gaming review portion of the Lenovo C630, for perhaps the third iteration.

Perhaps, the best physical feature of the Lenovo C630 is the one users may overlook. The C630 is absolutely quiet. However the fans or ventilation is designed in the chassis, they render the computer ninja-like quiet, even when pushing up against Chrome usage and the 32-bit version of Microsoft Teams. 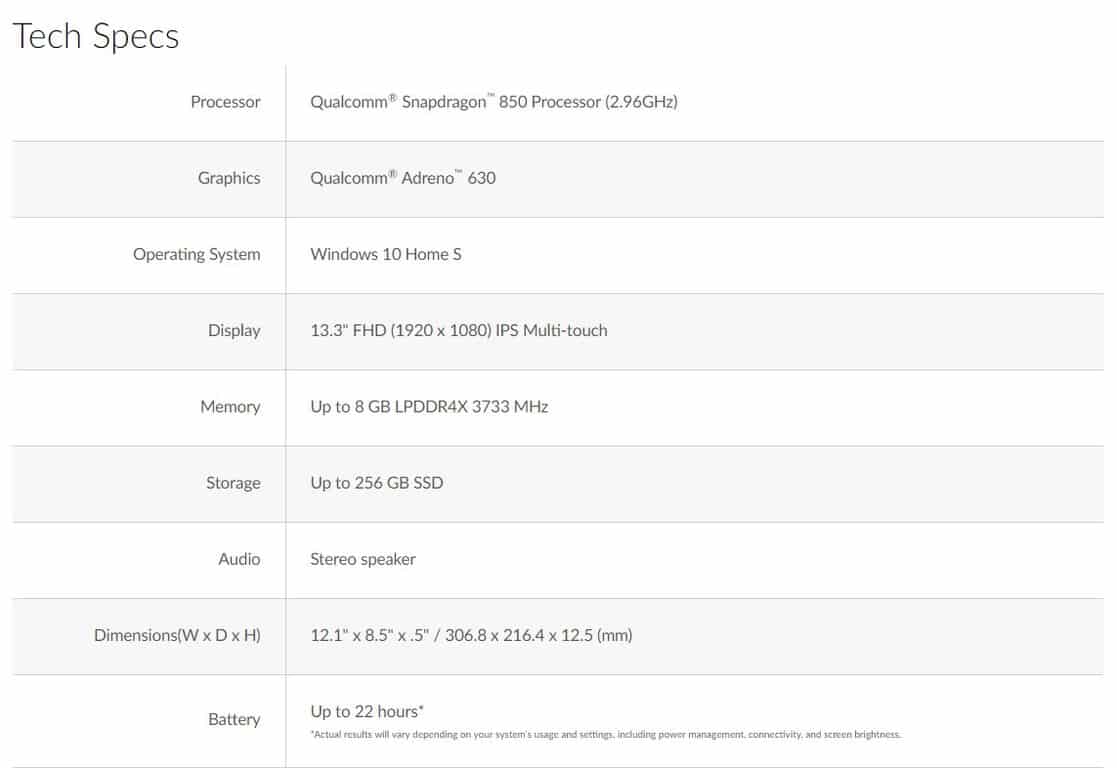 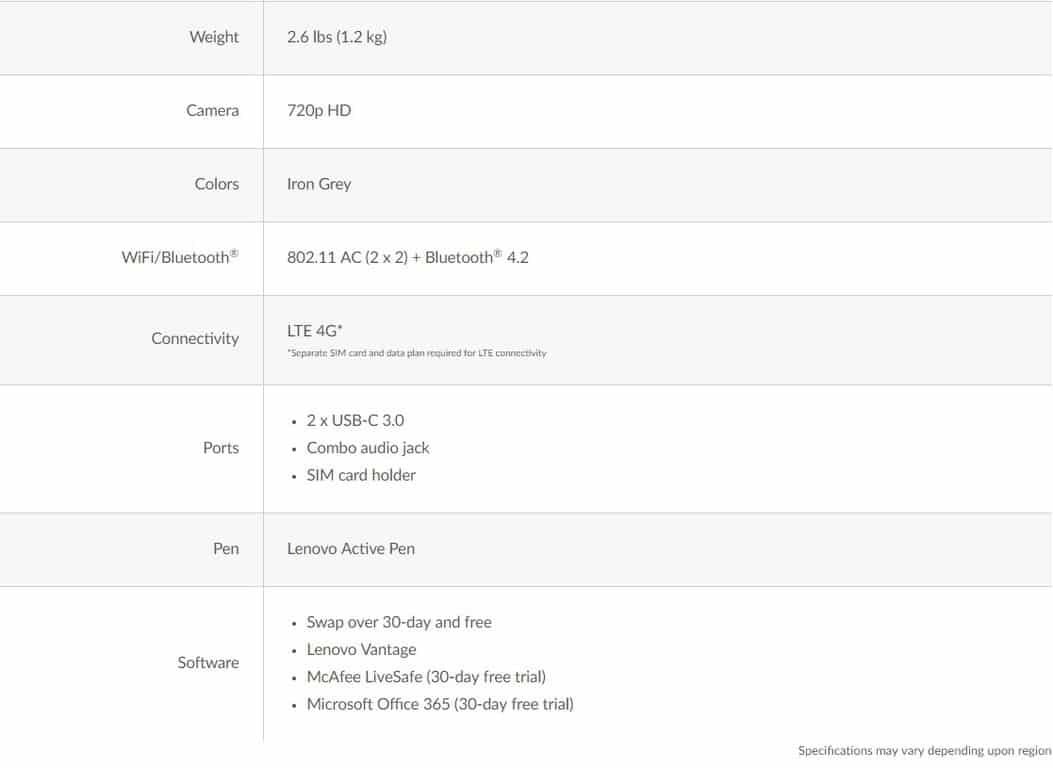 I’m not going to prescribe all of Lenovo’s marketing shortfalls on the company alone, I believe the legacy engineering of Windows has something to do with how the operating system handles on ARM. There need to be several caveats put in place here when addressing this laptop and the Windows on ARM architecture.

The C630 makes use of Qualcomm® Snapdragon™ 850 Mobile Compute Platform and while it’s perhaps one of the most powerful architectures to-date for the company, the reality is that it powers the C630 to comfortably to the heights of a Surface Go on a Pentium Gold CPU.

What this amounts to is a device that performed admirably at the basic to moderate computing demands I put it through such as web browsing, Skype, Microsoft Teams on the web, Office docs, downloading/uploading content and viewing YouTube or Netflix. 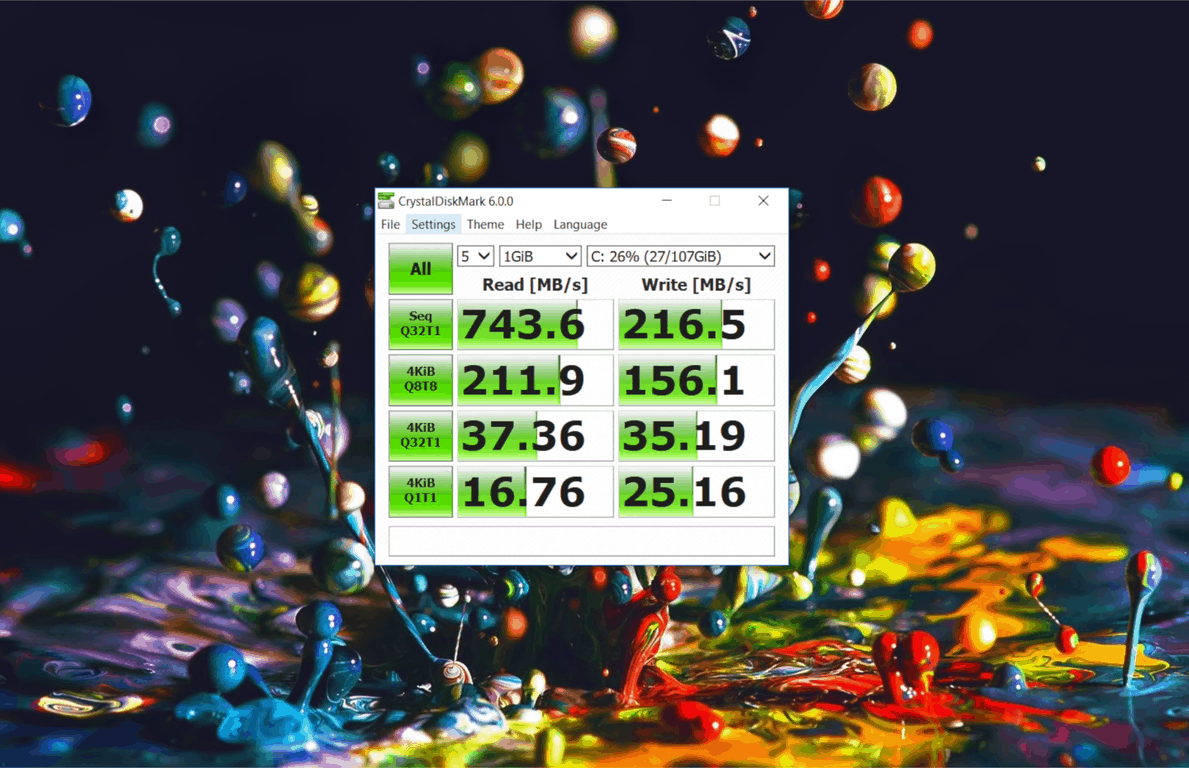 Unfortunately, the C630’s Qualcomm 850 boosted speed improvements from the previous iteration of the 830 are a bit hamstrung by the USF SSD used for Android smartphone rather than the m.2 SSD more traditionally used. The use of the USF SSD means it’s optimized for speed transfer of media that is usually found on smartphones such as pictures, music in MP4 format and videos in H.264 and H.265, venture anywhere beyond those and you’re looking a slower upload and download process.

When all is said and done about the processing power of the Lenovo C630, its overall design and the inclusion of Windows 10 S out of the box, the initial assessment is that this is a good second try from Microsoft, Lenovo and Qualcomm. The Lenovo Yoga C630 won’t win over ThinkPad users, it’s not going to convert the Surface Pro with LTE crowd and it’s not going to move the needle for MacBook Pro converters.

However, what the Lenovo Yoga C630 does is offer individuals going to college for the social sciences, history, business, writing or the traveling executive who needs access to secure internet connections and limited documentation and web services, a viable option. 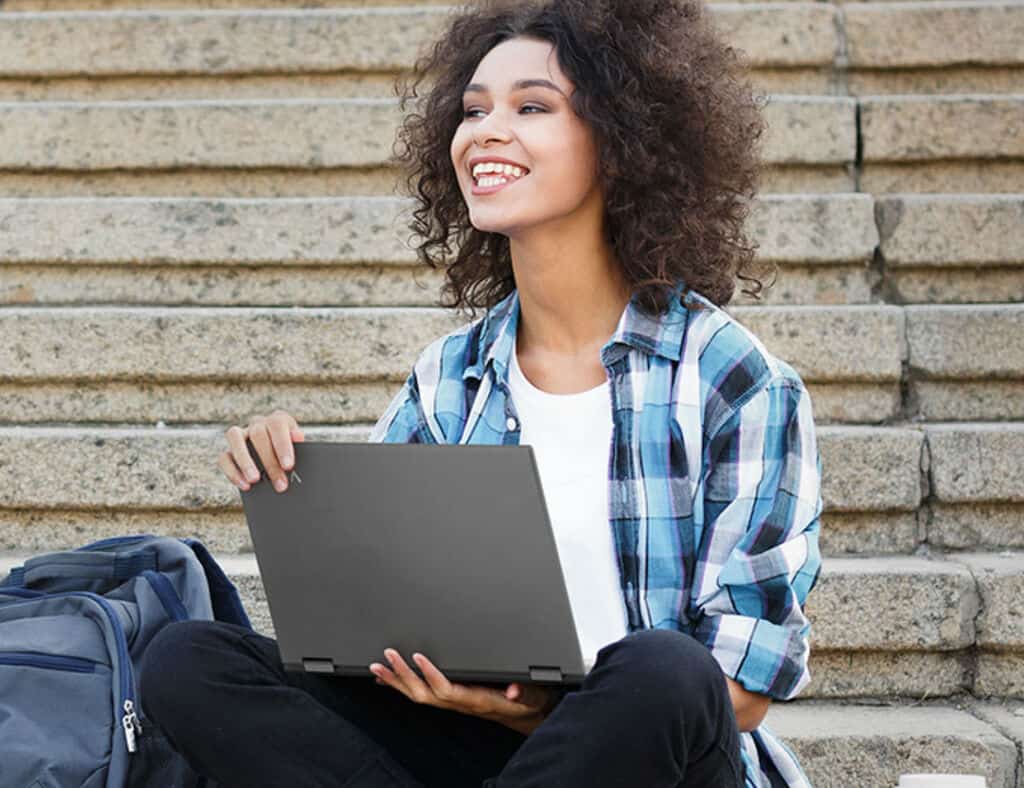 The C630 sits in the uncanny value of almost, but not quite there. Limitations of the processor and operating system are holding the C630 back from being the default Windows device, for now as well as being the poster boy for Windows on ARM.

Perhaps, when Microsoft finishes its Chromium switch and includes native for ARM engineering it could help to mitigate some of the issues with 32/64 bit compatibility with a much more robust web browser application store and allow the Qualcomm chipset to shine.

Right now, the Lenovo Yoga C630 sits in the shadows of its predecessors eagerly awaiting the engineering and technology to catch up to its future promise.