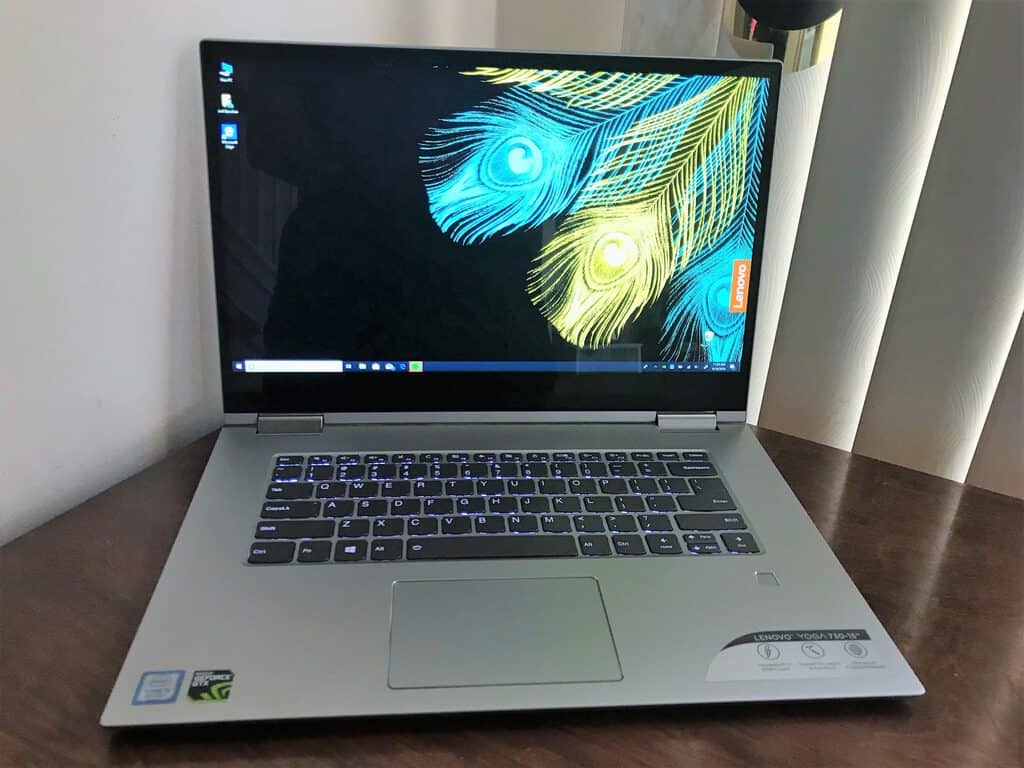 A few months ago, we had the chance to review the Lenovo Yoga 730. We eventually concluded that device packed big power in a small but premium package. Now about half a year later, Lenovo followed up to send us the 15-inch version of the Yoga 730 for review. After spending a little over a month with it, we have found that the bigger device means better performance.

The unit sent to us for review packs the 8th generation Intel Core i5-8250U CPU (4 cores, 1.6 / 3.4GHz, 6MB cache) and comes with a total of 8 GB DDR4-2400 MHz RAM. It also comes configured with the NVIDIA GeForce GTX 1050 GPU with 4GB GDDR5 graphics memory. As for the storage, there’s a small but decent 256GB SSD M.2 PCIe SSD on board. It is running Windows 10 Home, and other specs are listed below. With the same configuration as we have here, you’ll be spending a total of $1,149 for this unit, but prices can go up to $1,908 depending on configuration.

For the price, you’re getting something that is worth considering if you’re opting for a premium 15-inch 2-in-1. Putting things into comparison, a similarly configured Dell XPS 15 with slightly newer AMD Radeon RX Vega M GL graphics would run you $1,299. And on the other end, a 15 inch HP Spectre x360 with a 4K display would run you $1,369. There are big differences between these models, but Lenovo’s offering is the most balanced, without overstepping the feature set.

The design on the 15-inch version is relatively the same as the 13-inch version. There’s the same aluminum material on the top and bottom chassis, which gives it that MacBook look and feel. I have the silver color, but an iron grey version is also available. Everything on the device screams premium, and from the patented silver accent hinges, the Yoga 730 just looks so fancy when sitting on a desk.

Unfortunately, for all that aluminum and extra power under the hood, the device does get a bit heavy compared to the 13-inch counterpart. I did try to carry the device with me for my CompTIA classes, but 4 pounds was a bit too heavy for my liking. Anyway, the weight is not a bad thing, mainly because it packs a powerful graphics card for helping you get heavy duty tasks done. 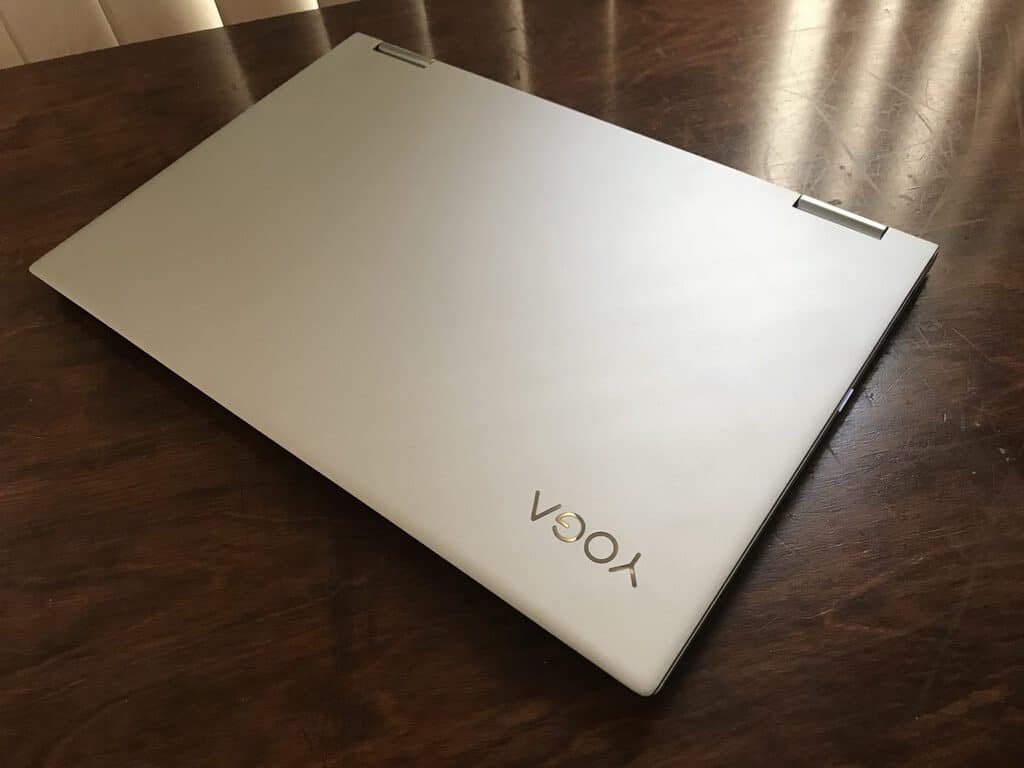 Speaking of bad things, the same issue with the missing “lip” on the front of the device persists on the 15-inch version. I had to use two hands to open up the screen, and when using one hand, the device almost slipped out and to the floor. This is something to be cautious of before you buy.

In terms of performance, the Yoga 730 15-inch is a true powerhouse. Though not a gaming laptop, the bigger screen and dedicated graphics card leave room extra oomph for both gaming and work. You can see this with the Geekbench 4 scoring below.

For my web-based work, the performance was indeed really up there at the top. I was able to work with 8+ tabs in Edge without any noticeable slowdown. RAM usage was at 55% and the CPU never slowed down. Everything was buttery smooth and I even edited a few Lenovo Yoga videos using Filmora without any slowdowns. I actually also edited these videos on my MacBook as a comparison, and the 1080p rendering time was same 2-3 minutes across both devices. My only complaint would be with the heat and fans when the system is under heavy loads, as the fans are on the back and blew heat directly into my lap when it was in use. 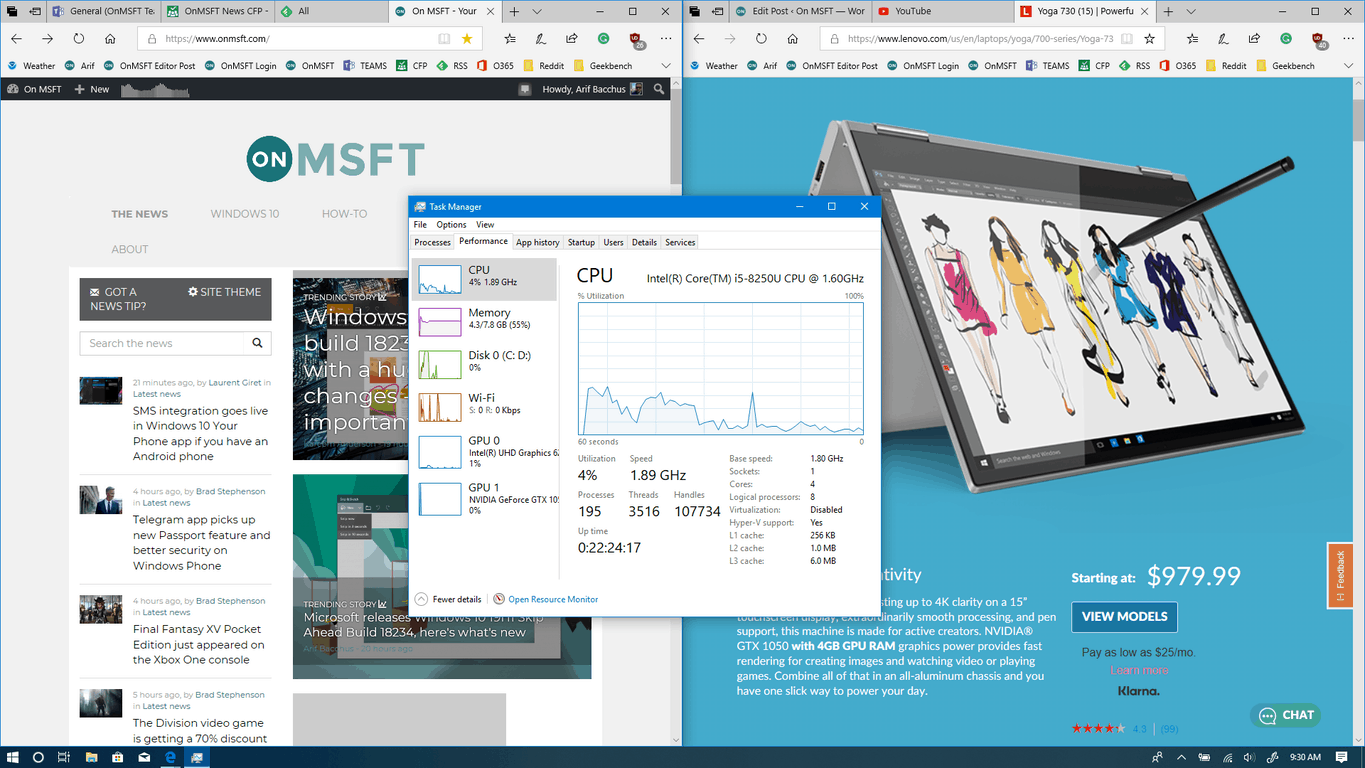 Performance on the Yoga 730

As for gaming, the Yoga 730 15-inch is fairly decent. It didn’t get me to 60 frames per second in any games, but it handled Windows Store games with ease. I played Forza Motorsport 7 and the Forza Horizon 4 demo, and the frame rates were anywhere between 29-30, with no dropping out on recommended settings. Other games like Rocket League and State of Decay 2 performed great too. Again, this is not a gaming laptop, but it can do most casual gaming without any issue. 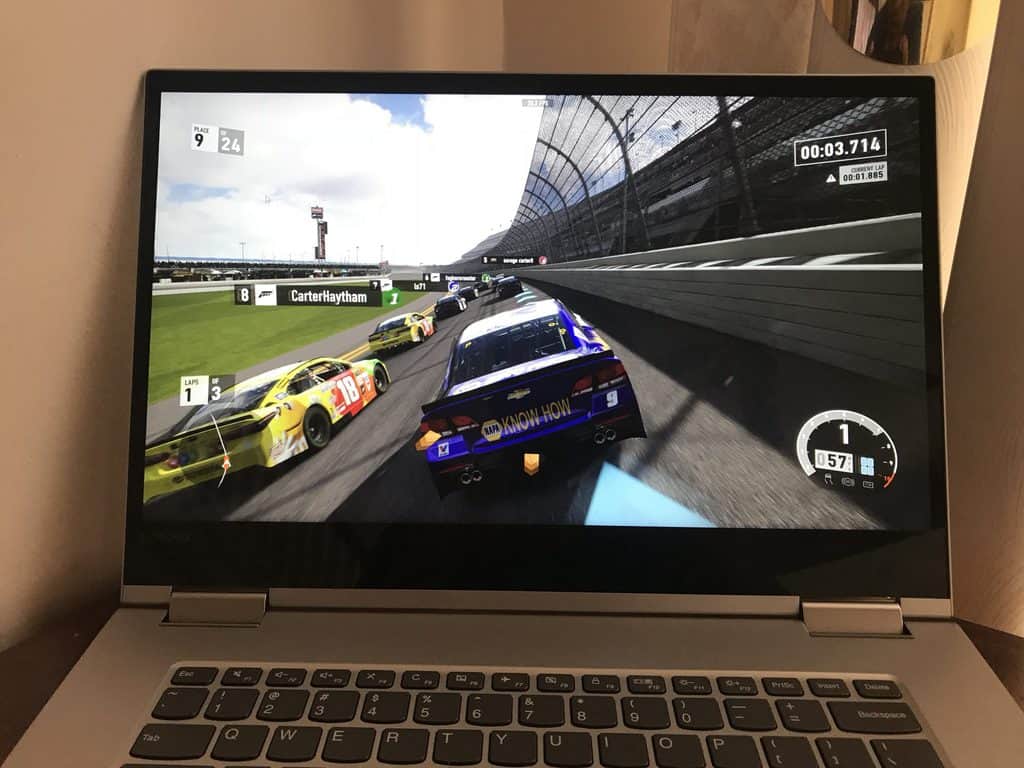 Cinematic display, regardless of which mode you use it

I love big 15-inch laptops for the extra working space they provide, and that is exactly what one gets with the Yoga 730 15-inch. Even though this is a standard 1080p display, it still impresses. Keep in mind that there is a 4K option available if you want an even more impressive setup. Anyway, in my month with the Yoga, not only did I use it for my usual work-related tasks but I also used it as a multi-media machine. I found that regardless of which way I used it, the display fit all my needs.

First off, for work, I was able to stack my windows side by side and leave my second monitor behind. Of course, I adjusted the scaling down to 100% for this, but it paid off in the end. When in laptop mode, I was able to get more work done without being tied down to my home office. 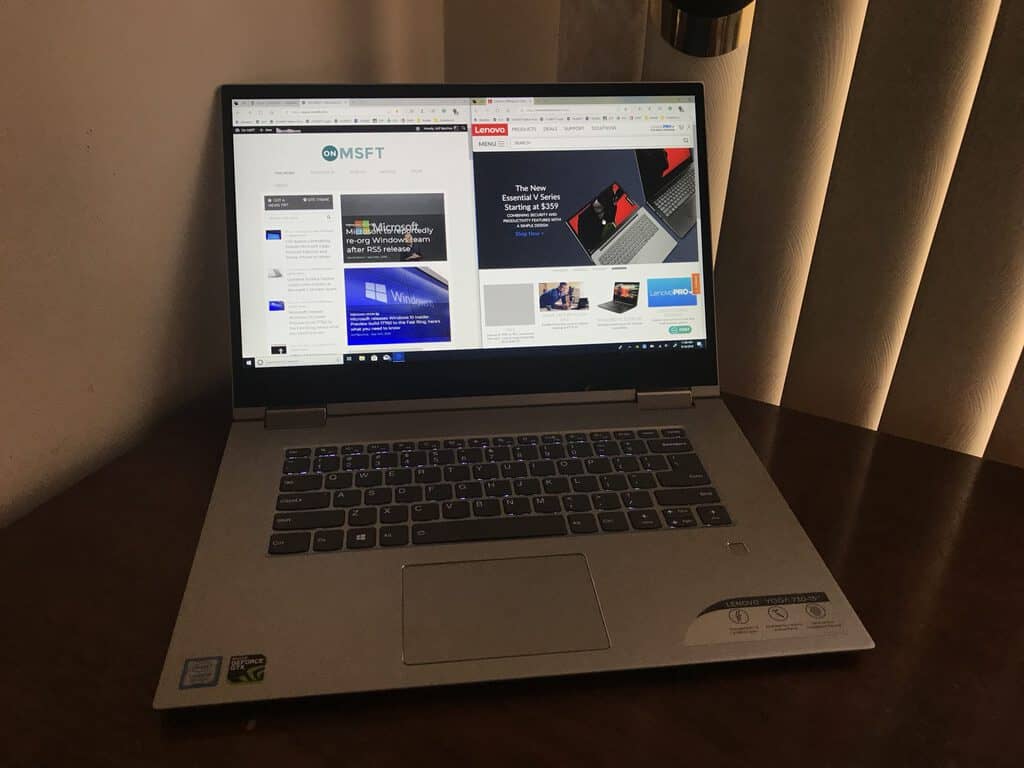 Secondly, for entertainment, I used the Yoga 730 15-inch as my Netflix and Amazon Prime machine. The screen gets very bright, and when folding back the device into the tent or stand mode, my favorite series were front and center. When watching episodes of Tom Clancy’s Jack Ryan, the action in otherwise dark scenes seemed very realistic. In a section where the US invaded a Yemen Terrorist compound, the visuals from the soldier’s night vision goggles stuck right out. It was almost as if I was right there with them in the room. 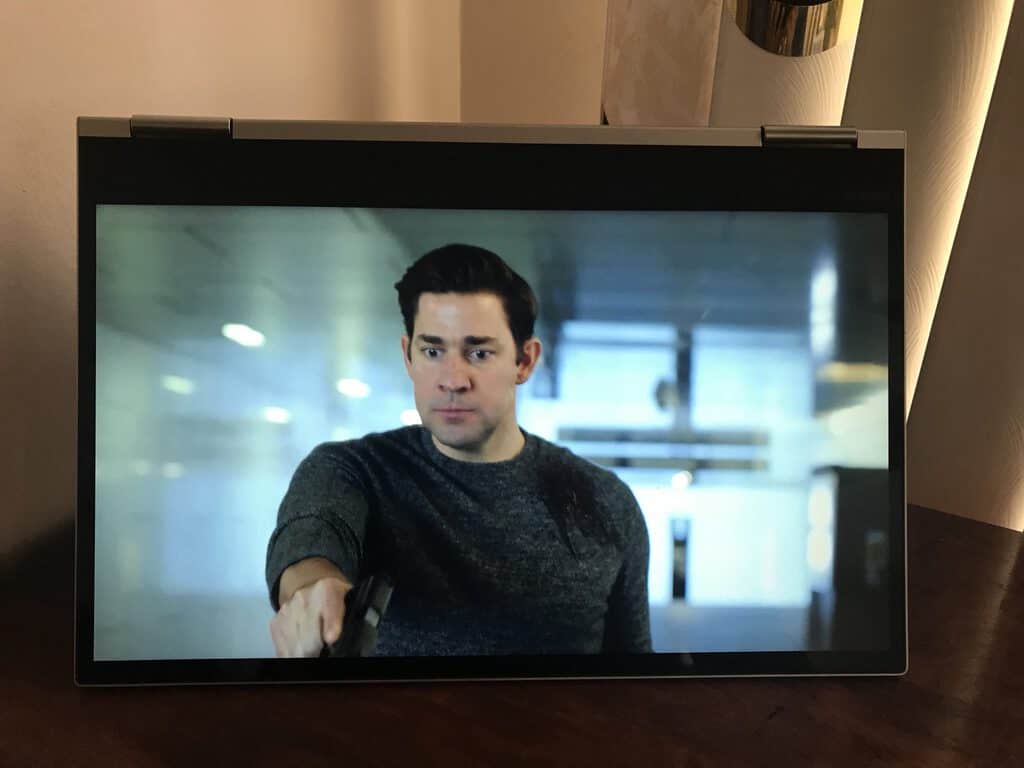 Most other laptop makers are ditching classic USB ports for USB C, and not everyone is ready for that tech. Luckily, the Yoga 730 comes with a nice set of ports and I/O, for classic and modern accessories. You’ll find USB C, USB A, HDMI, and more.

On the left side, there is the AC power jack, a USB 3.0 port, and the headphone jack. On the right side, there is another USB 3.0 port, an HDMI port, and a single USB C port. I really like the inclusion of HDMI, as I didn’t have to worry about using an annoying dongle to hook up the Yoga to my monitor. And, the dual USB 3.0 ports meant I had the extra room for my Xbox Wireless Adapter and my mouse when needed. Also, keep in mind that the USB C port is Thunderbolt 3 compatible, so you can connect dual monitors, and external GPUs, without worry.

Just as with Yoga devices, the keyboard (backlit up to 2 levels) on the Yoga 730 15-inch is pretty decent. It may not be on the same level as a ThinkPad, but it is fairly comfortable. Some may be sad that there is no number pad, but the keys feel very clicky and thin when speed-typing. I initially found them a bit too shallow for my fat fingers, but over time my fingers adapted to the feel of the keyboard. Still, it didn’t stop me from getting 100WPM in my typing tests, so there’s no need for worry.

As or the trackpad, it too is decent. Just as the keyboard, it is very clicky and responsive. It is fairly smooth and glossy and supports the usual Windows 10 touch gestures. I also did appreciate how Lenovo keeps it towards the center of the device, leaving lots of room on the sides to rest my hands when typing.

Lenovo also throws in a fingerprint reader on the right side of the keyboard. It functions just as you’d expect, and I was able to sign in with it in really fast without worrying about passwords. 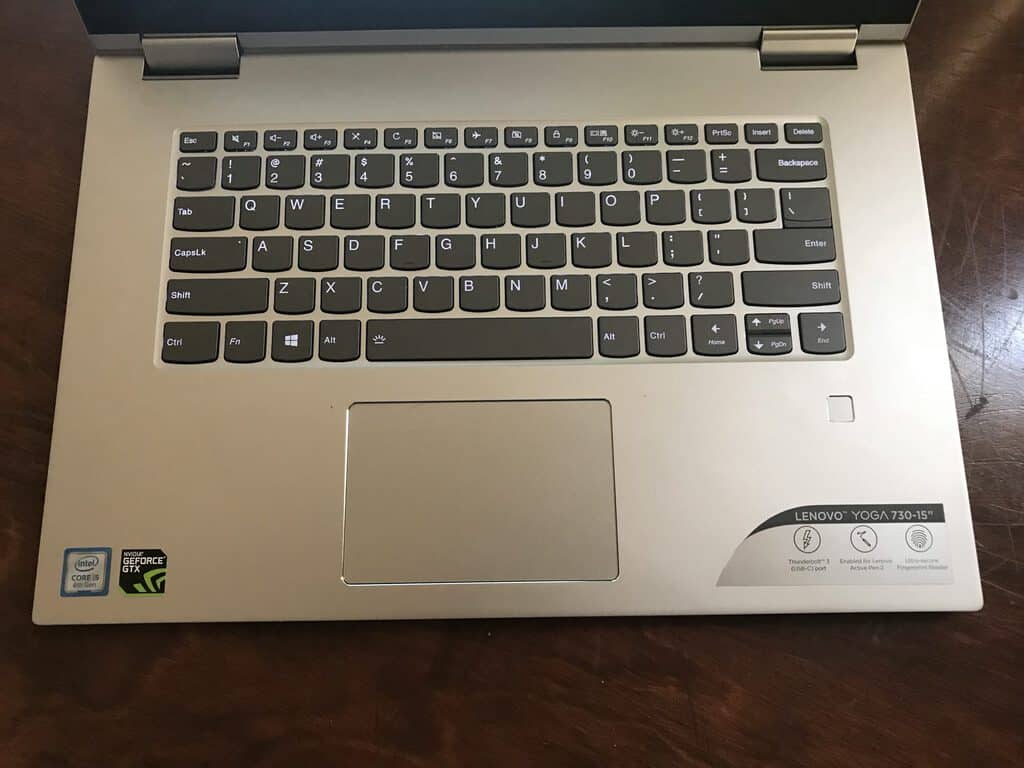 Much like Microsoft with the Surface Pro and Book 2, Lenovo is not including an Active Pen pen with the Yoga 730 15-inch. This is a bit sad, as the 15-inch screen is plenty spacious for inking and drawing. Instead, I ended up using my fingers to draw in Fresh Paint, and it was a nice experience. The screen was very responsive, and it accurately reflected by finger movements. Although the screen can be reflective, it still works just fine. Active Pen 2 can be purchased from Lenovo for $48.99, still cheaper than the $99.99 price for the Microsoft Surface Pen. 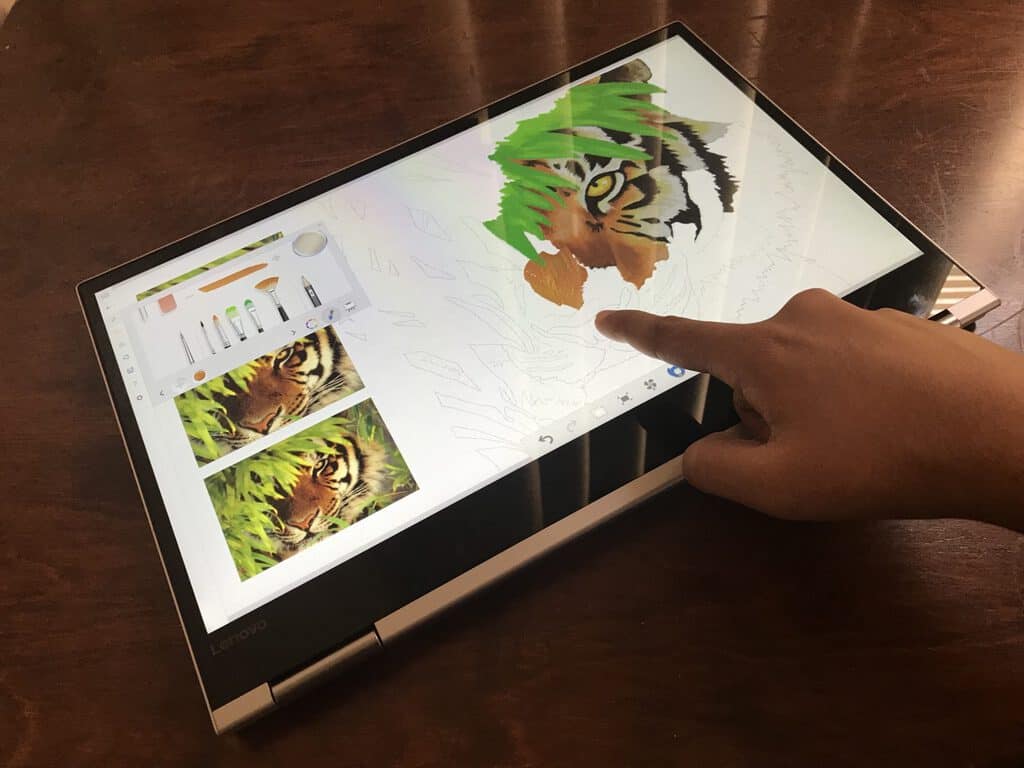 Most Windows 10 devices with Intel’s 8th gen chips are known to have good battery life, and that is exactly what I got with the Yoga 730 15-inch. For standard work usage, and on “Best Performance” I got anywhere between 5-6 hours of battery life. That is more than enough to get me through my 9AM-2PM writing shift, so I have no complaints. On the gaming side, I got anywhere between 2-3 hours, but that is what you can expect when the device is drawing power from the graphics card. Either way, I found that the Yoga 730 15 inch recharges from 0%-90% in about 1.5 hours, so battery life was not a big concern for me. 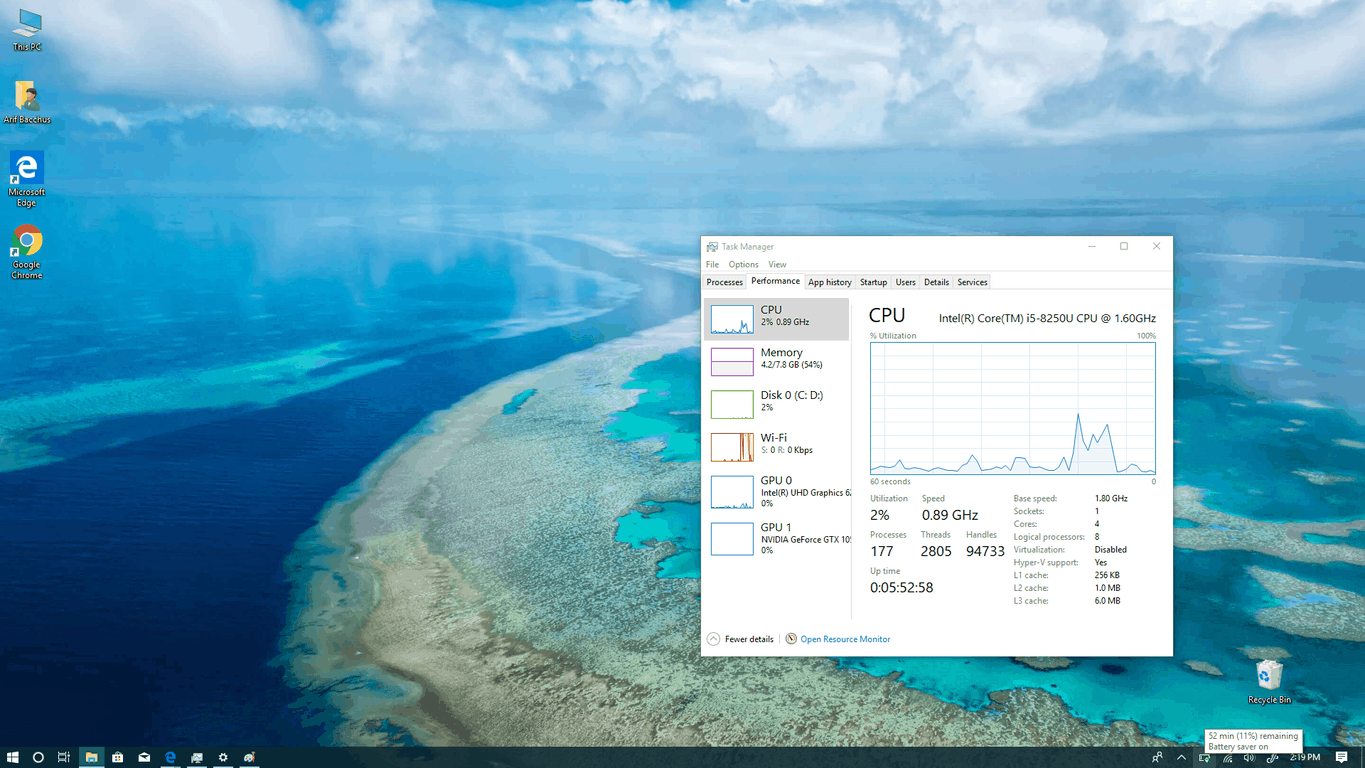 At the end of the day, the Yoga 730 15-inch is an attractive option for those in the market for an ultra-premium Windows 2-in-1. Not only does the device look beautiful, but it packs some powerful specs for gaming and the most demanding multitasking. It also packs a large display for multi-media fun and a nice selection of ports and IO for all your accessories. You can buy the Yoga 730 15-inch for prices starting at $1,149.