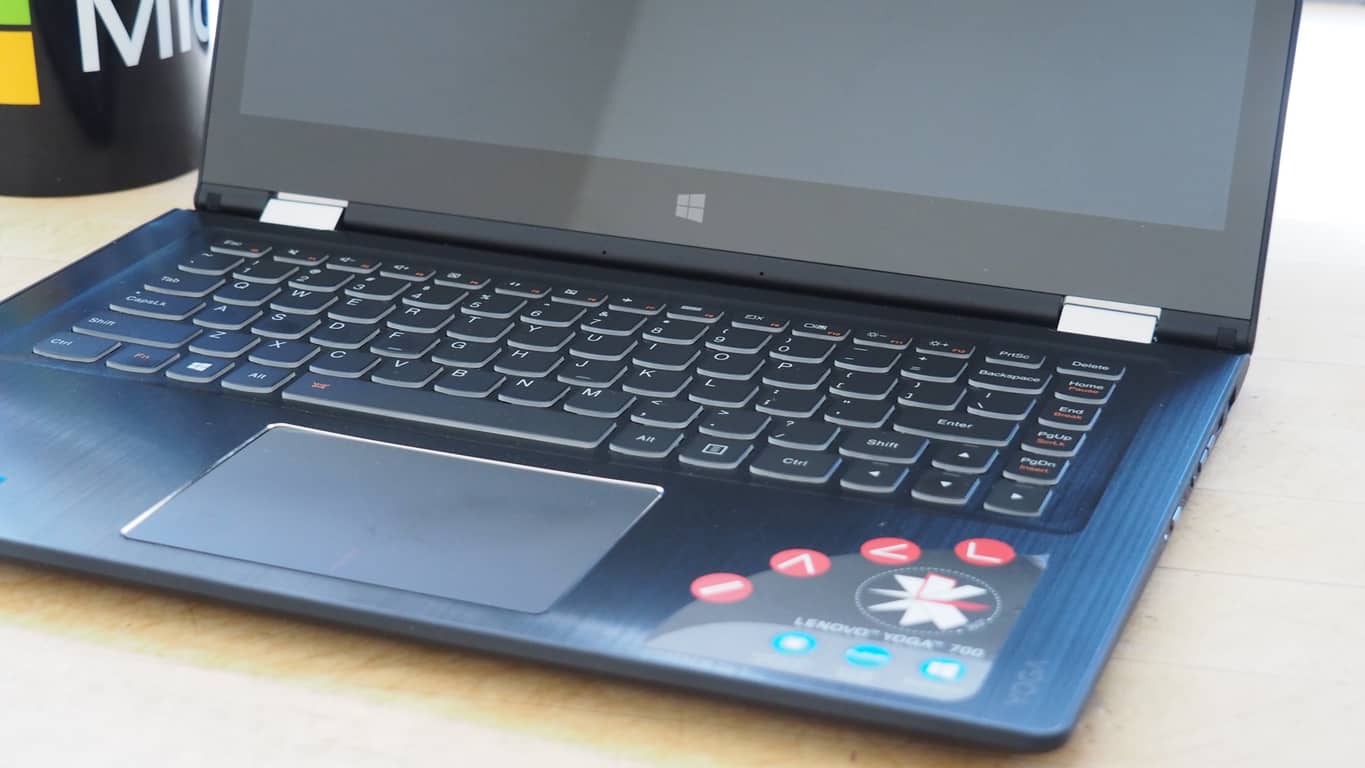 Cons: Thick and heavy when used as a tablet, screen doesn't get very bright, heat is vented into the lap.

Summary: The Lenovo Yoga 700 is a good midrange Windows 10 2-in-1 device that's best as a notebook with occasional tablet use.

I've been using a Surface Pro 3 or 4 for so long now that evaluating the Lenovo Yoga 700 has been a real exercise in adjusting expectations. The Surface Pro machines are so small and light that the Yoga 700 seems huge in comparison, whether measured as a traditional notebook or as a tablet. Like the Surface line, the Lenovo Yogas are meant to serve as both kinds of machine, and so measuring the Yoga 700 as a 2-in-1 is entirely reasonable. 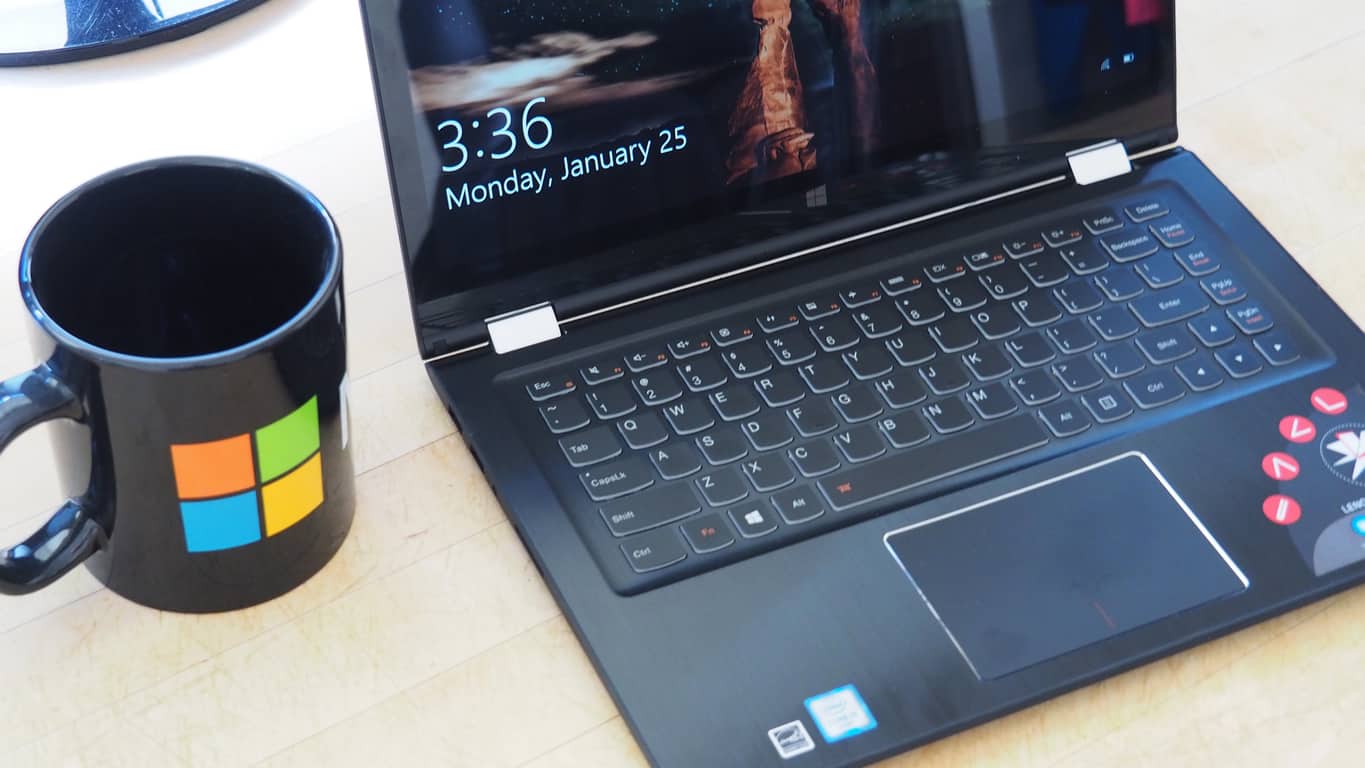 In short, while I'm comfortable using my Surface Pro 4 as either a notebook or a tablet, I can't say the same for the Yoga 700. Judged as a traditional notebook, the Lenovo is thin and light enough at 0.73-inches thick and 3.5 lbs. Judged as a tablet, however, with the screen flipped 360 degrees, the Yoga 700 is just too massive for anything but occasional use in this form factor.

That doesn't make the Yoga 700 a bad machine, by any means, and I'll be talking about that below. It just means that if you are specifically looking for a machine that can function as a tablet just as well as it functions as a traditional notebook, then perhaps the Yoga 700 isn't the right machine for you. Consider the Yoga 900, or a Microsoft Surface device, instead. At the same time, if you're looking for a traditional notebook that can on occasion serve as a tablet, then the Yoga 700 has a lot going for it.

I've never been a fan of the folding-style of 2-in-1 machines. First, they're thicker and heavier than I like my tablets to be. Second, I don't like pressing on the the keyboard as I'm holding a machine in tablet mode. Granted, I use my Surface Pro 4 with the Type Cover flipped around on occasion and that's no different, but I'm not forced to use it this way. Third, and maybe most important, I've simply been spoiled by the size and weight of Microsoft's third- and fourth-generation Surface Pro machines.

Yes, the Yoga 700 has the advantage of being a nice traditional clamshell notebook when you're working on the bed or holding the machine on your lap. My Surface Pro 4 is serviceable in such circumstances, barely, and there are times when I myself prefer the stability of a "normal" notebook. However, ultimately, I'd rather trade some notebook lapability for a lighter and thinner tablet, and so the Yoga 700 just feels uncomfortable. 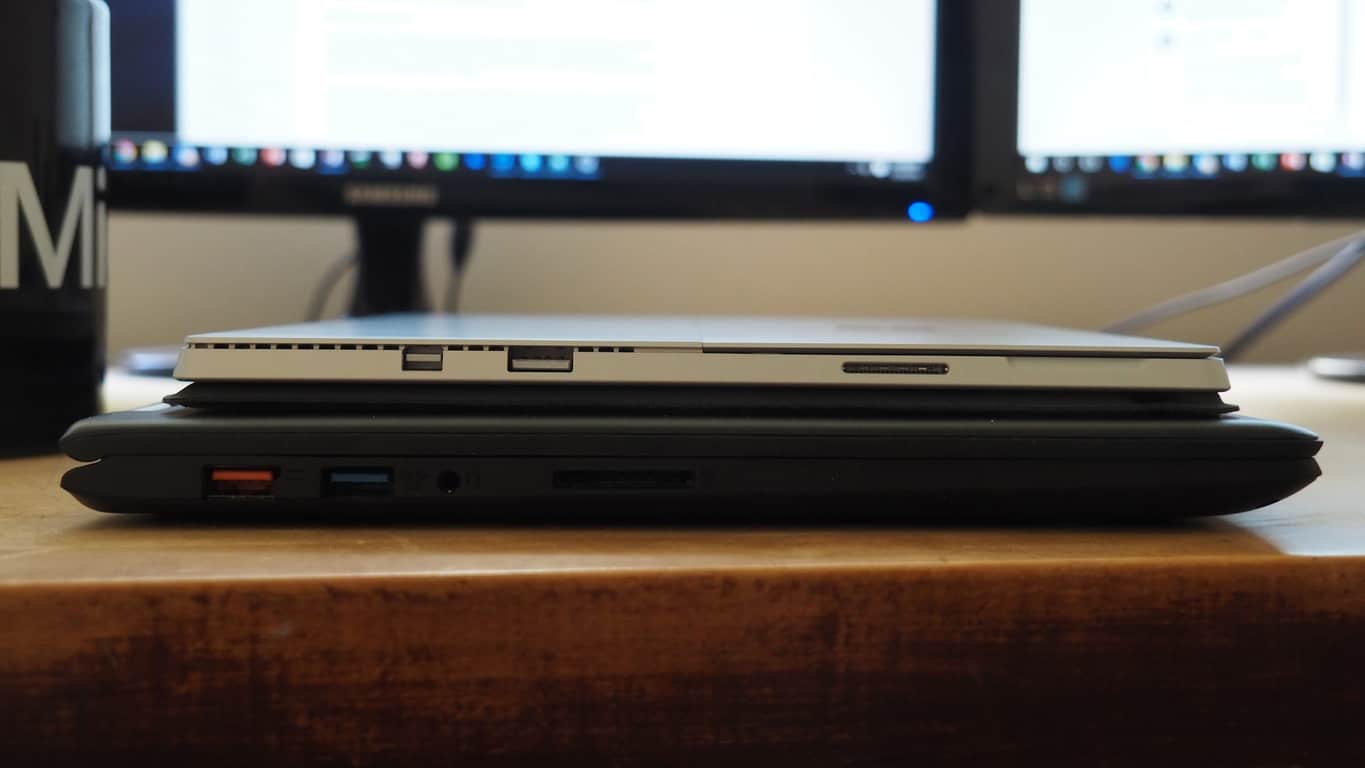 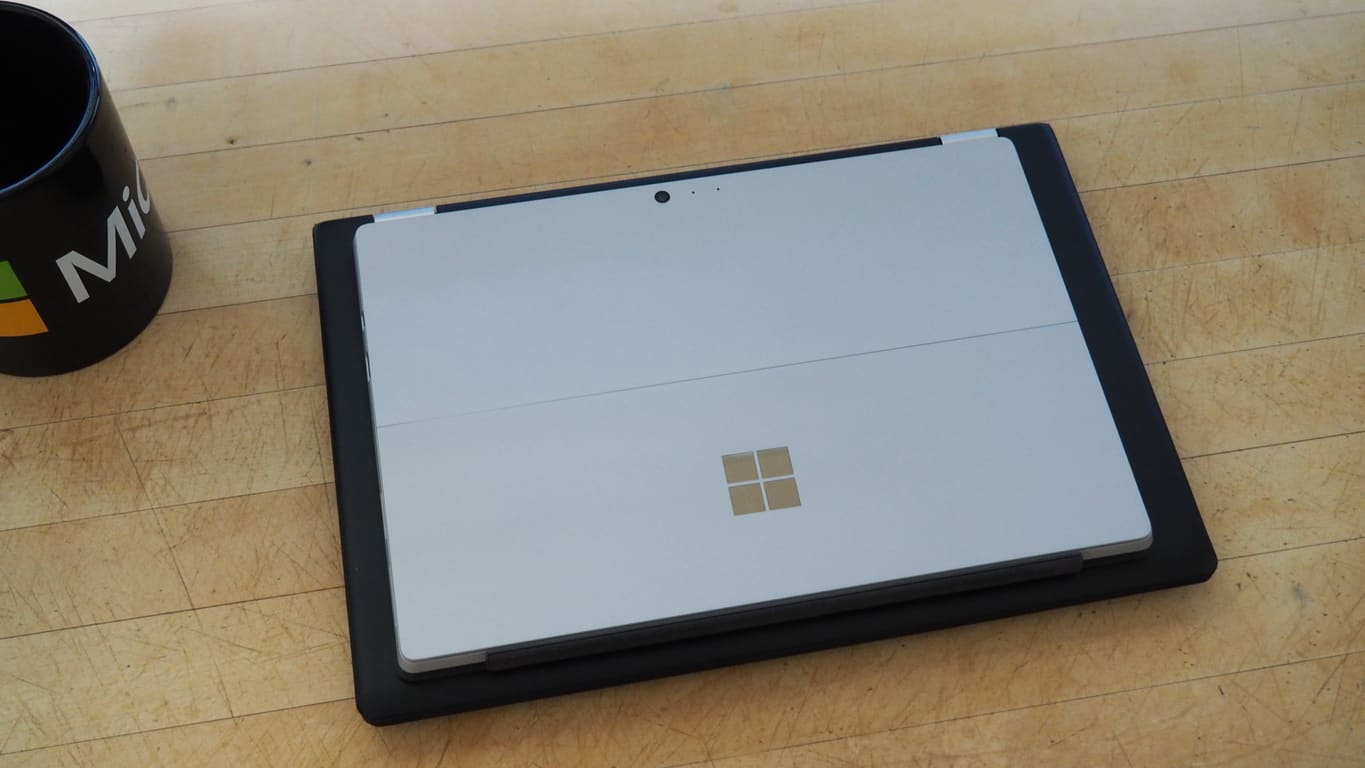 That said, the Yoga 700 also offers a great deal more computing power at the same price point, and if someone needs to use a machine as a true laptop more often than as a tablet, then the Yoga 700 might be a perfectly fine choice.

Here are the review unit's specs:

The Yoga 700 has a nice textured coating that makes the machine easy to grip, and materials (mainly plastic) that keep it fairly lightweight and balanced. The keyboard tray is relatively firm, and the machine generally feels solid. One tends to worry about the hinge on these wraparound 2-in-1 devices, and Lenovo seems to have engineered a reasonable version--the screen stays in position when used as a notebook, and the hinge generates confidence as you swing it around. 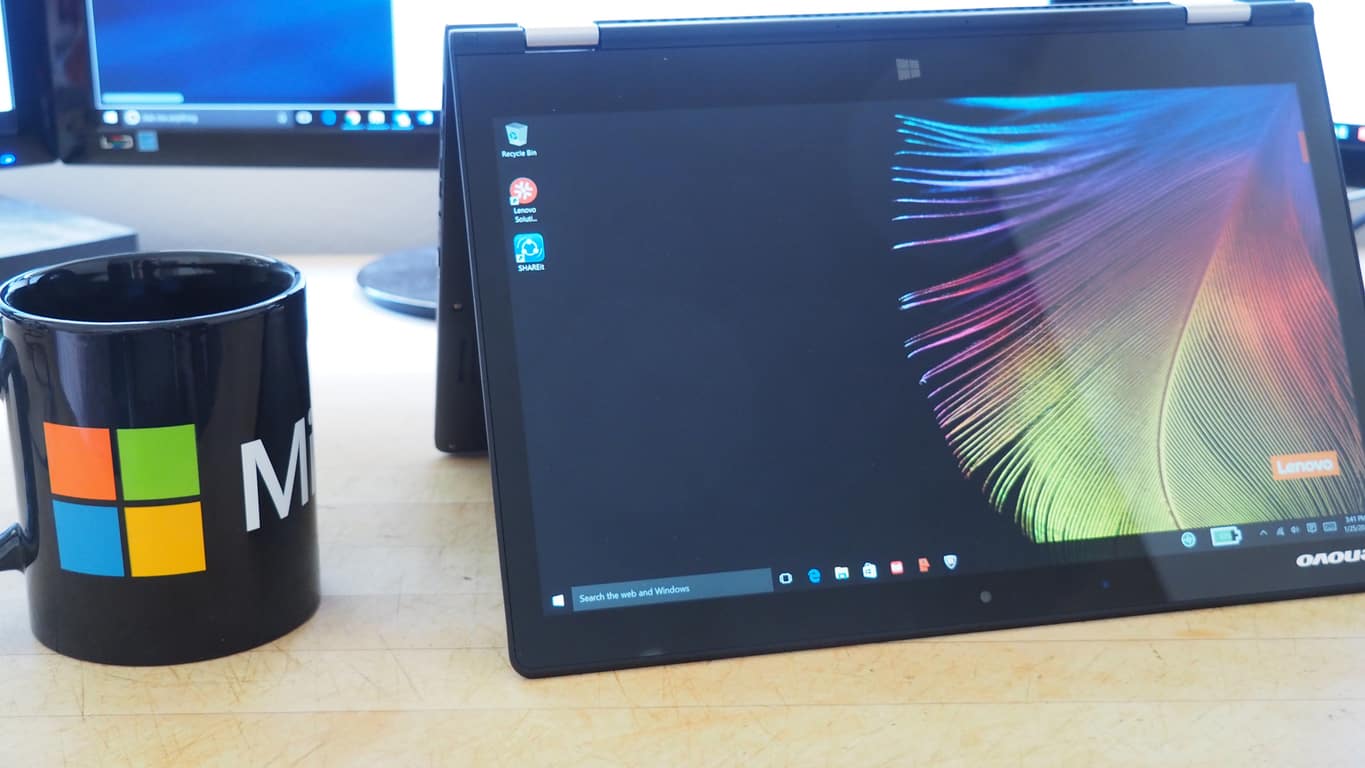 Generally speaking, build quality is good and is well-matched with the price. If anything, the Yoga 700 feels like a lot of quality for the money.

If the Yoga 700 has one glaring weakness, it's likely the screen. Again, I might be a bit spoiled coming from the Surface Pro 4, which has a simply superior screen. The Lenovo's screen doesn't get terribly bright, certainly not enough to overcome the glare from its very glossy surface. Colors are nothing special, and the default settings make everything too large. Changing from 150% to 125% in Settings > System > Display > Change the size of text, apps, and other items helped a bit. 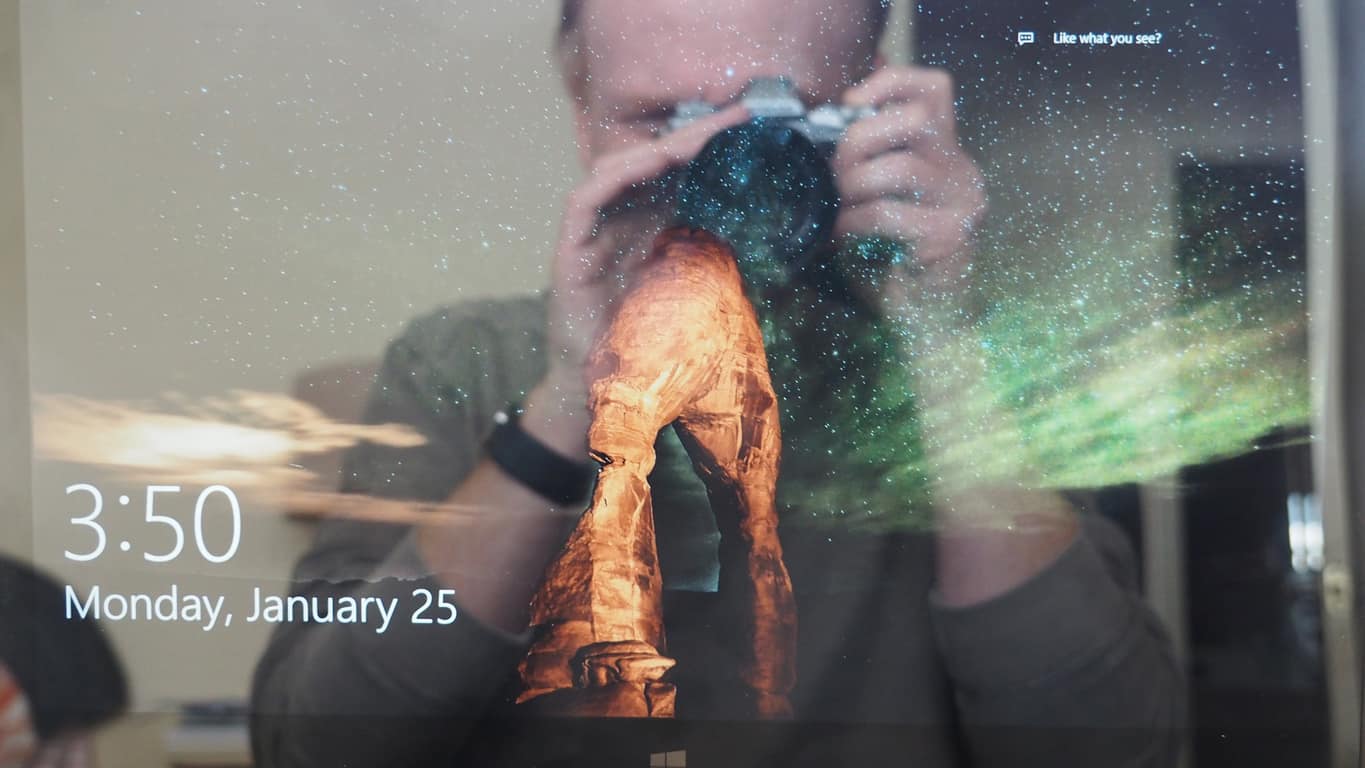 Again, judging against notebooks of just a couple of years ago, which most often utilized lower resolution 1366X768 screens (such as my HP Envy 14 from awhile back), the Yoga 700 is just fine. Full HD (1920X1080) looks good with Windows 10 apps like Edge, and 14" is a good compromise screen size compared to 15.6" screens that can result in a too-large chassis. But the Lenovo also has some huge top and bottom bezels compared to more modern systems, and one is left wondering if a few adjustments could have resulted in smaller chassis that's more comfortable in tablet mode.

Speaking of tablet mode, I've once again been spoiled by the Surface Pro 3 and 4. It's really remarkable how much better a 3:2 aspect ratio is in tablet mode than the typical 16:9, which feels terribly stretched. Using the Yoga 700 as a tablet in portrait actually feels a little unnatural. I hope more manufacturers of 2-in-1's switch to 3:2, because widescreen machines just don't work well for me in portrait. 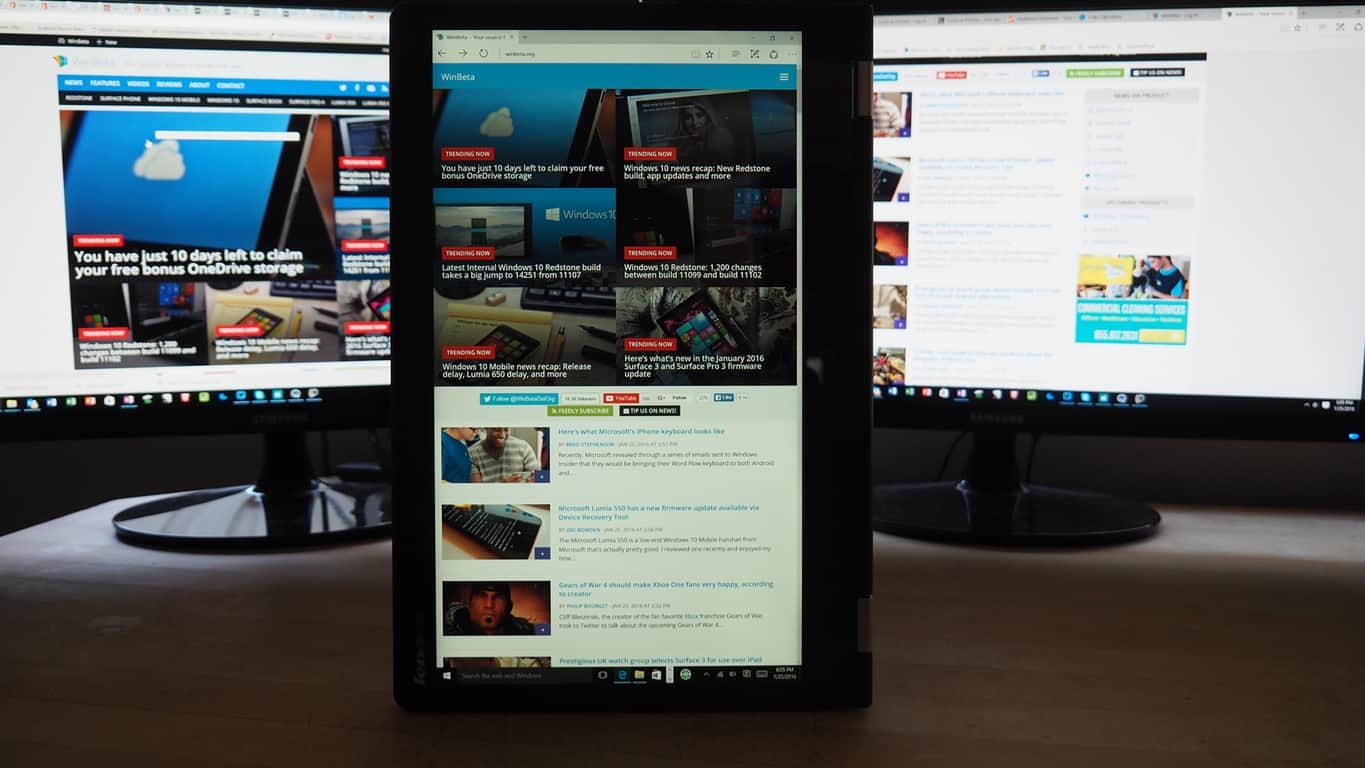 The Yoga 700 performs just as you'd expect from a machine stocked with a 6th-gen Core i5-6200U CPU, 8GB of RAM, and an SSD. That is to say, unless you want to render the next Pixar film or play Crysis 3 at anything but the lowest settings (if at all), you'll likely find the machine's performance to be more than adequate. Casual Windows 10 games are fine, and you can likely get away with some older titles at moderate settings, but gamers won't want to rely on the Yoga 700.

One concern is that the fans do turn on occasionally, and although they're not terribly loud they do stand out in a quiet room. Worse is that heat vents from the bottom of the case towards the rear, meaning that your lap can get nice and toasty. The heat has to go somewhere, and clearly Lenovo hasn't engineered the heat to vent up in front of the screen or even through the keyboard, as with some systems.

I didn't do any scientific testing of the Yoga 700's battery life, but I did use the machine as I would a production notebook and I enjoyed about six hours of work before getting a low-power notification. That's a tad bit disappointing for this class of machine, where the ability to get a full day's work would be considered acceptable. It's also less than half the battery life of the leading notebooks such as Dell's XPS 13 and Apple's MacBook Air.

Yes, the Yoga 700 costs considerably less, but battery life isn't where you'd hope to see compromises. It's not like Lenovo squeezed the guts out of the machine--there's plenty of room for more battery capacity. Perhaps future firmware updates will improve things, but in the meantime battery life doesn't appear to be a real strength.

A few years ago, I would have considered the Yoga's keyboard to be one of the better notebook keyboards I'd used. It has good spacing, decent (but not great at 1.2mm) key travel, and is generally comfortable. I was able to adopt to the keyboard and achieve my typical 80wpm fairly quickly, and so I probably shouldn't complain.

At the same time, this is 2016, and notebook keyboards have come a long way. Compared to the keyboards on higher-end Lenovo machines, the Dell XPS 13 and 15, and of course the latest MacBook Pros, the Yoga 700's keyboard is decent but not spectacular. Really, it's more of a testament to how far keyboards have come on midrange devices--most machines today have keyboards that are better than just good enough, and the Yoga 700 is no different. 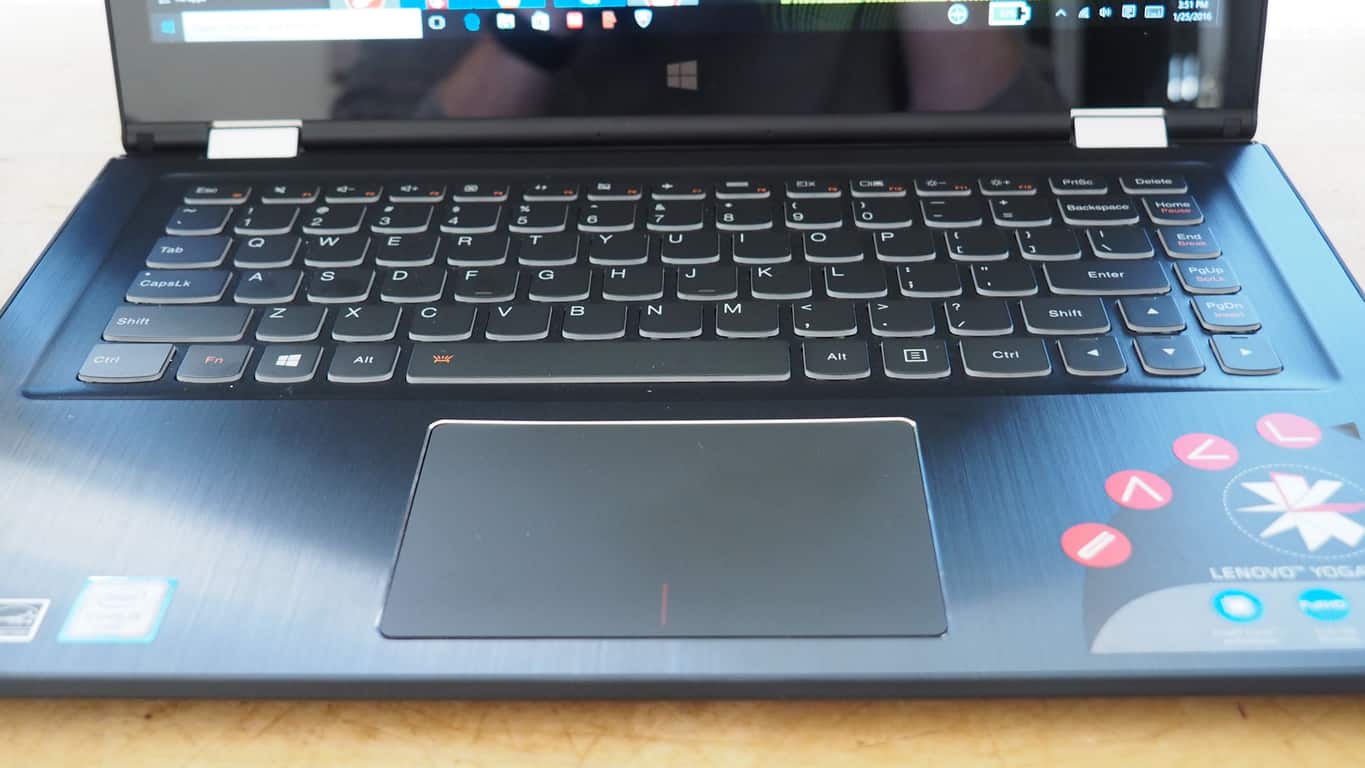 One pet peeve of mine is a keyboard with too much flex. Simply put, I don't want to press in the middle of a keyboard and feel like I'm pushing into the guts of the machine. The Yoga 700 has some flex, but nothing terribly egregious.

They keyboard layout is fairly standard, with only the right-side Enter and Backspace keys being a bit squeezed by the home-end-pgup-pgdown buttons aligned along the right edge of the keyboard island. I found myself hitting these poorly placed keys on occasion, but I'm sure with more use I'd likely adjust.

The touchpad is large and comfortable, and demonstrates just how far Windows touchpads have come. Multitouch gestures work fine, and I had no issues with palm rejection (a pet peeve of mine with older touchpad technology). The best thing you can say about a touchpad is that it just works, and this one qualifies.

The dual speakers are on each side of the bottom of the unit, and depending on how the machine is placed can get muffled. Volume was fine, though, for watching movies, but I wouldn't expect to entertain guests with any thumping soundtracks. I'd rate the speakers as acceptable, but nothing remarkable.

If you're looking for a well-spec'd notebook that's relatively thin and light, then the Lenovo Yoga 700 is a good choice at $899 as reviewed. You get a 6th-gen Skylake processor with a full 8GB of RAM and decent 256GB SSD storage, in a chassis that feels like quality and isn't terribly heavy. You'll want to make sure you move it from your lap when the CPU gets hot, but otherwise it's a good notebook for the money.

If you want to use your Windows 10 2-in-1 for more than just occasional tablet use, then you might want to look at Microsoft's Surface Pro 4 or another 2-in-1. The Yoga 700 is just a bit heavy and thick to use comfortably as a tablet for long, and the widescreen aspect ratio makes tablet use funky anyways. At the very least, check one out in person before making your decision, to make sure you're comfortable with the screen folded over.

There are other good machines at this price point, but the Lenovo Yoga 700 remains a decent enough choice. You'll give up some things like a superior ultra-high-res screen and pen support, but gain a good performer that's reasonably sized for a notebook-first machine.