Lenovo has created a new laptop that combines the best of the ThinkPad X1 Carbon flagship notebook with the design of the Yoga line, creating the ThinPad X1 Yoga. In a sea of notebooks and hybrid devices, why should you stop and give this particular device a look?

Sure there are a number of powerful notebook options out in the market, but what makes the ThinkPad X1 Yoga stand out? The specs and design, of course. The ThinkPad X1 Yoga offers a professional-grade notebook with a flexible, 360-degree design that supports Lenovo's traditional flexible usage modes. 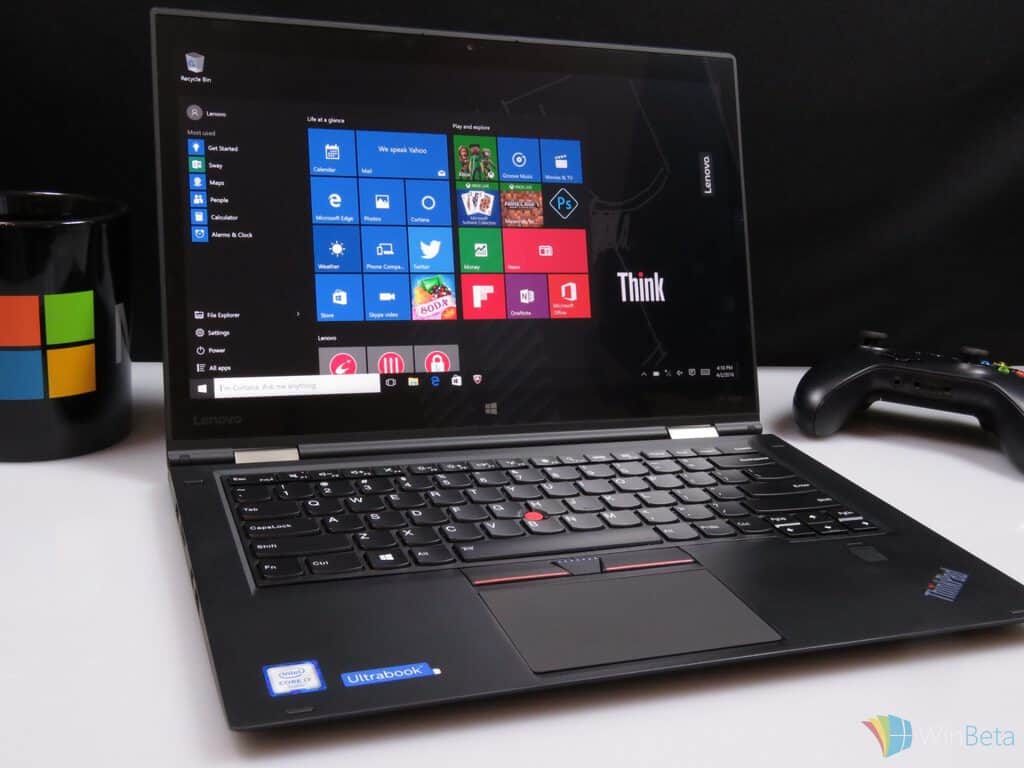 As Lenovo describes it, while using the device in Stand, Tent, or Tablet mode, the keyboard keys appear to sink into the system creating a flat surface. This is actually an engineering optical illusion as the frame is actually rising to create the flat surface and locking the keys into place. This offers a comfortable feel while using the device as a tablet while also allowing confidence against damage from liquid or debris.

The ThinkPad X1 Yoga features a 6th-generation Intel Core i5 processor (with models that support an i7 processor), 8GB of system memory, 256 GB of SATA storage, Intel HD Graphics 520, a 14-inch FHD display with anti-glare technology, LED blacklight, IPS, and a 16:9 aspect ratio making it quite pleasing to view. There is also a HD720p camera, three USB 3.0 ports, a Mini DisplayPort, one HDMI port, Onelink+ connector, a combo audio and microphone jack, a MicroSD slot, and a SIM slot. 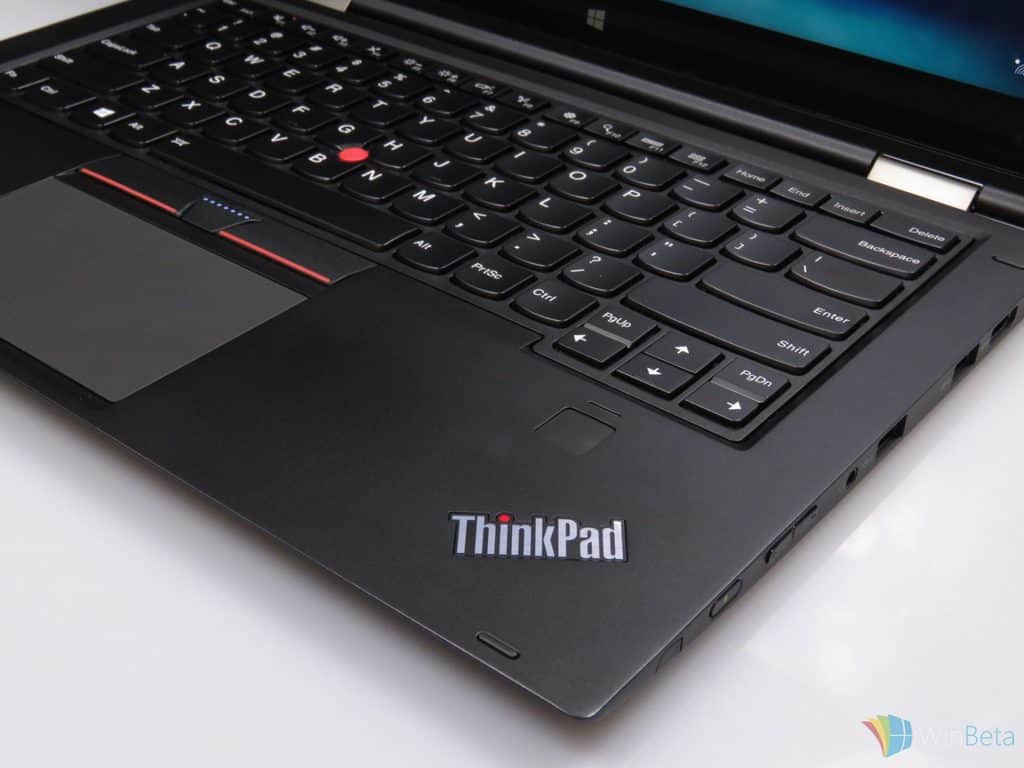 The device itself is super light weighing 2.8 pounds and features a carbon fiber top cover and a "super magnesium" palm rest and bottom cover. Super magnesium, for those wondering, is what Lenovo is calling this particular material which is an updated magnesium alloy composite that allows the system to be thinner and lighter without sacrificing durability.

The Lenovo ThinkPad X1 Yoga features a dual hinge, something that is a little bit different than what Lenovo normally uses on their devices, offering a thinner and lighter mechanism but also allowing for a strong feel.

The device also features a fingerprint reader, which thankfully is supported by Windows Hello -- a cool feature in Windows 10 allowing you to use your fingerprint as a login method. Your fingerprint is stored in the flash memory and not in the operating system, for those wondering about security.

Fun fact, for those curious -- the ThinkPad X1 Yoga has passed the MIL-STD-810G military certification’s eight “MilSpecs” that incorporate 15 unique tests for durability conditions. These are external certifications that demonstrate the durability of the system and meet requirements for government and military customers.

The ThinkPad X1 Yoga features a stylus pen, which is a new addition to the X1 family of devices from Lenovo. It uses active capacitive technology to allow use on any capacitive touch screen in the ThinkPad line (granted the device has support for it). The pen can be used for drawing, annotating documents, or making notes. It features 2,048 levels of pressure sensitivity, a right and left click button, a rechargeable battery, and docks to the side of the notebook for charging.

According to Lenovo, it takes 15 seconds to gain 100 minutes of pen usage -- I was able to back this up. With 15 seconds of charging, I was able to use the pen for up to an hour before charging it again. Really cool stuff! Similar to the Microsoft Surface, Lenovo has added the ability to block accidental touch input when the palm is resting on the display or when you are holding the device in your hand, to improve palm rejection.

Is the pen anything special? Not really. I've used better pens before. Don't expect to use this pen and device for drawing art pieces as there are better alternatives suited to that type of work. If you are looking for something decent for writing notes and basic drawing, the stylus pen just works. 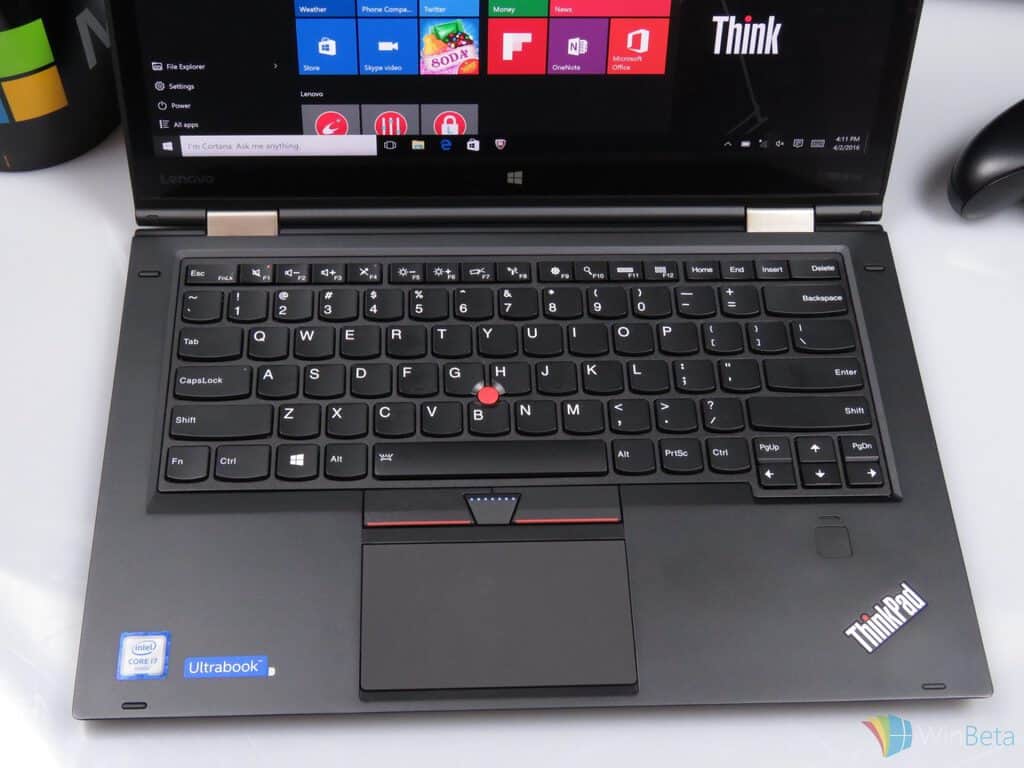 The ThinkPad X1 Yoga has powerful specs under the hood and was able to handle everything I threw at it with a figurative smirk. It features a great CPU, plenty of memory, and a fast hard drive with lots of storage space. If you don't mind a 14-inch display (or should I say, if you prefer a 14-inch display), then this device will suit you just fine.

Would I buy this device? Yes. I definitely consider myself a business user and this device offers everything I need in a lightweight form factor with a design that isn't too flashy. I personally would wait until the price dropped just a little bit before purchasing it, but your money will definitely be well spent if you elect to make this notebook yours.

Microsoft is really gunning for the iPad Pro with Windows Ink