Back at CES 2018, Lenovo took the wraps off the 3rd generation ThinkPad X1 Windows 10 Tablet. This year's model is completely reworked and comes with a bigger and taller display, 8th generation Intel processors, and many other features which genuinely make it a Surface Pro killer. I've been spending the last month with the X1 Tablet, so here's more on why it packs plenty of value for consumers and buisnesses when compared to the Surface Pro.

The unit sent to us for review is powered by the 8th generation Intel Core i7-8250U processor clocked at 1.60 GHz. It comes with 16GB of RAM soldered on board, and Windows 10 Pro pre-installed. It is important to note that this year’s X1 Tablet will no longer offer attachable modules. This makes the tablet even more like a Surface Pro, down to the keyboard connection and the kickstand. Other specs which will be mentioned in this review can be seen below.

Our specific unit is available on Lenovo.com for $2,132.10, but prices start at $1,269.00. This might seem like a lot to drop, but when compared to Microsoft's Surface Pro, you're getting a lot of value for the money. With Lenovo, you're getting the X1 Tablet itself, plus a keyboard and pen included. Then with the Surface Pro, you're only getting the tablet for $2,199, and a keyboard and pen will cost you extra and bring the price up to $2,467.99. With both configurations almost the same, it should be really obvious which one is the better deal here.

Similar to Microsoft's Surface Pro lineup, the ThinkPad X1 Tablet is constructed out of magnesium and aluminum. It's a premium feeling material that makes the device beautiful to hold in your hand. The metal and aluminum carry around to all areas and is cool to the touch even when the system is under heavy loads. The only downside is that the X1 is colored black with a Matte finish and can pick up fingerprints and dust if rubbed the wrong way.

Putting things into comparison, the ThinkPad X1 Tablet (1.96 lb without keyboard) is heavier than the Surface Pro (1.70 lb without keyboard) The weight difference is primarily due to the larger display on the X1, though it is much more noticeable with the keyboard attached. I preferred the heaviness of the X1 since it feels much more premium and more like the weight of a traditional laptop.

I must also mention the improved kickstand on the X1 Tablet. Again, it is very reminiscent of the one on Microsoft's Surface Pro, and it now folds outwards instead of downwards (like a ramp) on the previous generation. The stand mechanism also depends on Lenovo's signature watchband hinges which are all pretty strong and sturdy. It all reminds me a lot of the Miix 720, except for the fact that the kickstand on the X1 3rd gen has "ears" on the side to help it dig into wherever it is sitting on.

Microsoft might still be holding onto the Mini Display port and USB A for compatibility reasons, but Lenovo thinks different (pun intended.) Indeed, for the price of their device, you're getting a PC with much more modern dual Thunderbolt 3 USB C ports.

Both of these ports are on the left side of the device, with either one available for charging or connections to accessories. You also can use the dual Thunderbolt 3 USB C ports on the device to connect up to two 4K monitors, external graphics cards, and more. This is otherwise not possible on the Surface Pro without the use of dongles docks or the USB 3.0 port.

In 2018, it is really inexcusable for a device not to have USB C and you shouldn't really be considering a Surface Pro for this reason. For the average consumer USB C on the ThinkPad X1 Tablet 3rd gen will offer up speeds of up to 40 GB/s compared to 10 GB/s on the Surface Pro's USB A ports. Yes, you'll be annoyed with the need for dongles to connect your mouse and keyboard up to the device, but it makes the ThinkPad X1 Tablet faster and more future proof than the Surface Pro.

Anyway, Lenovo also includes a pop out Micro-SD card and Nano-SIM card slot on the top left side of X1 Tablet. This is not easy to access without a SIM ejector tool and it really isn't the best spot. On The Surface Pro, this same slot is under the kickstand, making it easier to change out your SD cards on the fly.

Finally, on the right side of the device, you'll find the buttons. There's the power button on the top right side, followed by the volume rockers and a spot for the pen holster. Since the pen will block the volume rockers whenever it is inside the holster, this is not exactly convenient. I wish Lenovo would have moved the buttons to the top of the device like the Surface Pro, but it probably wouldn't have worked out since the fans are there instead.

Offering more room for productivity, the 13-inch 3K display on board the ThinkPad X1 Tablet 3rd gen is taller than the 12.3-inch display of the Surface Pro. It comes in at 3000 x 2000 resolution, making it slightly sharper than the Surface Pro, which maxes out at 2736 x 1824 resolution. You can see the sharpness in the photo below, where the X1 is on the bottom and the Surface Pro on the top.

As a side note, Lenovo also tells me that the display is covered in Gorilla Glass 4. This is very reassuring since it means the device is protected from scratches and drops, without going the extra mile of buying a screen protector. Combined with the fact that the X1 is tested against a 12 military-grade certification, this is a device that is bound to last.

Putting everything together now, the display on the X1 gets very sharp and bright, with images being crisp and clearer than the Surface Pro. For creators, it also means more true to life experience, as they'll get 277 PPI on the X1, vs the 267 PPI on the Surface Pro. And for me, it means that multitasking is easier since the larger display leaves more room for opening windows. When the two devices stacked side by side, you really can see the difference the screen size makes.

If you're looking for a Windows 10 device in 2018, you'll likely want to pick up one with Intel's latest processors. Unlike the Surface Pro which is stuck on the 7th generation chips, this years X1 Tablet comes with 8th generation processors. This means increased performance, battery life, and more. The X1 is a real champion at multitasking, and you can see this in the Geekbench 4 scoring, where it comes on top of the Surface Pro in the Multi-Core scoring.

With the Core i7 processor included in my review unit, I was easily able to multi-task in Edge with 15+ tabs open without any lag or tab reloads. I also edited some of the photos for this post in Photoshop and things rendered quickly. The system never really froze up, but the fans did kick in and go to high speed when it was under pressure. Though that's totally normal for any device, similar tasks would just slow down my Surface Pro and make the system lockup.

The fingerprint scanner and Amazon Alexa

We've reviewed a number of Lenovo devices this year which are compatible with Amazon Alexa, and the X1 Tablet is another. It was once again not available for me to test on this unit, and Lenovo tells me that the Alexa integration will be available for download in the near future. It's something that I really wish I knew more about, but for now, you'll just have to take Lenovo's word for it. See below for more on what Amazon Alexa will offer.

What I can talk about right now is the fingerprint reader situated on the right side of the device. It is out of the way and in the ideal location for Windows Hello, just like the IR camera on the Surface Pro. It also feels very reminiscent of a fingerprint reader from the Samsung Galaxy S5, and was speedy and fast for all my logins (though this fingerprint reader is not a button.)

I've done a side by side breakdown of Lenovo's Active Pen before, and a similar pen was included in the box in this year's Lenovo X1 Carbon tablet. It features up to 4,096 levels of pressure sensitivity and a solid tip, rather than a felt tip. This means the writing and drawing feel more natural, with the pen gliding across the screen, rather than dragging like with Surface Pen. Considering that you need to buy a pen with the Surface Pro, I have no gripes and complaints with the Lenovo pen.

The backlit keyboard on the X1 Tablet is far superior to the Surface Pro. It feels much more like a traditional laptop and the keys are more spacious and comfortable to the touch. There's also a solid matte surface underneath to support the keys, which is more solid than the fabric material on the Surface Pro. I was easily able to type at 100 words per minute and every touch of the keys satisfyingly slammed down into the cover.

Just like the Surface Pro, the keyboard also connects to the X1 Tablet with a POGO magnetic connection. This means it can sit on the system in two levels, one against the lower rim of the glass, and one laying flat on the table. Unfortunately, Lenovo's keyboard is proprietary, so it gets treated by Windows 10 as a separate attachment. Pressing keys won't wake the device from sleep and I was slightly annoyed by that inconvenience.

Finally, with the glass Surface Pro trackpad, the X1 trackpad is plenty spacious and has a mylar type finish. This again makes the experience feel more like something on a traditional laptop, and I was able to grip onto the trackpad easily when typing. It supports multitouch gestures, which is excellent for those times when I was too lazy to touch the screen. There's also the TrackPoint too, which is for precision use but lower on the keyboard and never really proved useful for me.

Coming with a larger 3K screen, you can expect some battery life sacrifices on the X1. In my month with the X1 Tablet, I've seen anywhere from 4-6 hours of daily battery life for my web browsing and other usage. This is about the same real-world timing that some users report on the Surface Pro, so it is not exactly surprising. As a side, you can actually charge the X1 Tablet with its USB C port, so there is no need to worry, as you can buy a compatible 65-watt-hour portable power brick and charge up on the go. 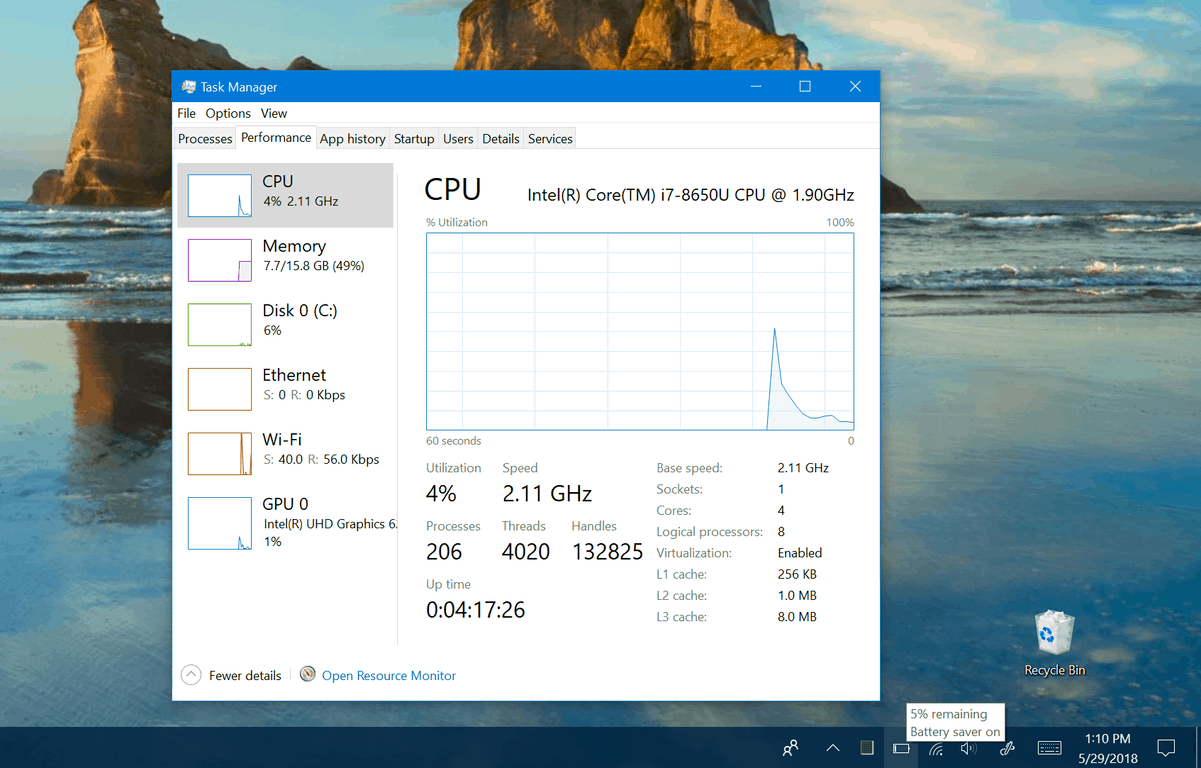 At the end of the day, you're definitely getting more value for your buck with the ThinkPad X1 Tablet 3rd gen. Not only is the keyboard and pen included, but you're also getting a larger screen, Amazon Alexa, the latest Intel processor, and a comfortable keyboard. Prices start at $1,269.00 and our unit is available on Lenovo.com for $2,132.10.