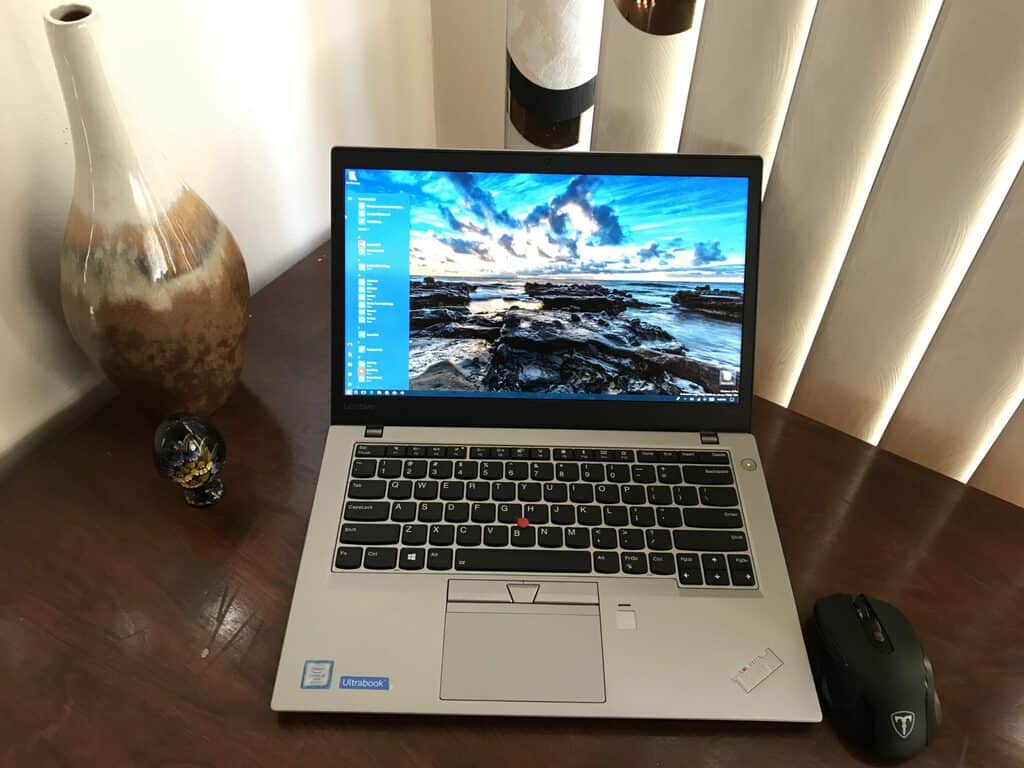 One of the greatest parts of being a Windows Insider is testing upcoming versions of Windows 10. Well, with the release of the Windows 10 Fall Creators Update looming, and with Lenovo providing me with yet another product review opportunity, I decided to do something different and test out Microsoft's latest Windows 10 Fast Ring builds on the Lenovo T470S. While it's a bit pricey, I feel as though the Lenovo T470S will last over time as the perfect laptop for Windows Insiders.

When enrolled as a Windows Insider, new builds will become available multiple times per week on a device, especially at a time like now when the end of a development cycle is approaching. With that so, there is the obvious need to have a laptop with an efficient processor and sufficient enough RAM. This ensures that the system won't get bogged down when pinging Microsoft's servers for new builds. Enter the Lenovo T470S.

Powered by Intel Core i5-7300U CPU clocked at 2.60 GHz, and 8 GB of RAM the Lenovo T470s is lighting fast, coming with the perfect specs to be a Windows Insider machine. With my speedy internet connection, the device was able to download and install a new build in less than an hour, which was particularly important for me when I was eager to write about new builds. The device also comes with a 256 GB Samsung SSD, meaning that I had ample enough space to download a new build and roll back to previous versions if something didn't go right.

Lastly, since most Windows Insiders won't be gaming on their primary test machine, the included Intel HD Graphics 620 is just right to achieve most common tasks, such as browsing the web and handling feedback in the Feedback Hub. Although the laptop tends to get a bit too warm and noisy, I used the machine for work here at OnMSFT for a few weeks. It was easily was able to handle my workflow of having multiple (10+) tabs open in Edge before things got a bit too buggy.

Not too fancy build, keyboard, trackpad:

When testing Windows Insider builds, most people are not exactly looking for a fancy and all metal PCs. Well, with a silver-colored carbon fiber hybrid material lid and a magnesium hybrid chassis, this is where the Lenovo T470S  meets these expectations. The build quality on the T470S is excellent but without being too fancy. It's composed of the familiar durable carbon-fiber hybrid material which has been ever so prevalent on most modern ThinkPads. Coming in at 2.9 pounds and 13 x 8.9 x 0.7 inches, this makes the device not too thick or not too thin. It's easy to store away and travel with---two very important things to consider when you're a Windows Insider that's always on the go.

When it comes to the keyboard, the ThinkPad T470S also meets standard Insider expectations. While very durable and also keeping a lot of travel room between the physical keys, the backlit keyboard (two levels of brightness) is also quiet, soft and comfortable. Lenovo says that the keys have 1.7 millimeters of travel and need 70 grams of force to be accurate, and this is exactly the case. Be it the middle of the day or late at night, with this keyboard, I did not need to worry when I took to the Feedback Hub to type up a storm and report bugs I found in Microsoft Edge. As extra, there is even support for Windows Hello via a fingerprint reader on the keyboard, which is always good for those moments when you want to keep the device secure from prying eyes.

Wrapping up, since newer Windows 10 builds have special support for precision touchpads, I appreciated the touchpad on the T470S, not paying much attention to the included ThinkPad TrackPoint. Although feeling a plasticy and hollow when clicking, the buttonless Trackpad gets the job done with ease. There's not a lot of friction when using the touchpad, and it's very responsive with all of the precision touchpad gestures within Windows 10. Definitely not as fancy or over the top as the trackpad on the Surface Book, but it offers up the same features and gets the job done right.

Power is everything, right? Well, the Lenovo T470S comes with two batteries, something not so standard on most other Windows 10 devices. There are two non-swappable three-cell battery on board, so when one battery dies, the laptop uses the other battery before telling you to recharge. It's nice to have the extra piece of mind, especially as you get ready to head to Windows Update and check for new builds. Anyways, while using the device, I've gotten anywhere from 5-8 hours of battery life, which was especially important for me when I left my laptop idle to download new builds. I needed not to ever worry about it dying on me.

A plethora of Ports:

Of course, not every Windows Insider will have their laptop standing alone most times. There's always the need for extra stuff like HDMI, USB, and Ethernet ports, especially when Insiders are looking to submit Feedback to Microsoft on how peripherals will work in new builds. Well, I ended up using the Lenovo T470S as my primary machine for a while, and I really appreciated the mass amount of ports on the device. This is nothing new for Lenovo, which has always had a great track record for keeping the amount of ports up.

On the left side of the laptop is an AC adapter, a USB 3.0 port, a headphone jack, and an SD card reader. Since I kept the unit plugged into a display for most of the time, I really appreciated having a separate power port, and not USB C for charging.

Anyway, on the right side of the laptop is the same story. There is a Thunderbolt 3 USB C port, a USB 3.0 port, a HDMI port, another USB 3.0 port, and finally an Ethernet port. Surprisingly, there is also an option for a SIM Card.

Although I did not use the LTE connectivity on my unit, this is indeed a great feature to have on a Laptop, especially if you have an unlimited or large data plan. It'll be great for downloading new builds while on the go, or just enjoying the use of the Internet and checking the Feedback Hub while out and about away from WiFi.

The dedicated HDMI port was particularly important for when I wanted to plug my laptop into a monitor for an expanded multi-tasking experience while navigating the Feedback Hub and also looking on the web for similar feedback reports. The three USB 3.0 ports are also an added plus and are a great way to test out accessories and send feedback to Microsoft on which accessories are working and which are not in new builds.

Last, but certainly not least on the list of important stuff when looking for a Windows Insider laptop is the display. This is yet another area where the Lenovo T470S is best. Coming in at 14 inches, and at 1920 (x)1080 resolution, the display is not too big or not too small. It's just the right size to get work done and explore new areas of Windows after installing a new build.

As a bonus, it's also very bright, possibly one of the best displays on a Lenovo device. It can open down to 180 degrees and outputs very sharp colors. Text and images come out crisp and clear, and the lack of glare on the display really brings out the beauty of Microsoft's new Fluent Design system seen throughout new Windows 10 Insider builds. At the end of the day, it's a joy to use.

There is also the added plus of the Lenovo T470S having a touchscreen. This is particularly awesome to have when you're looking to explore the touch-specific features of the Windows 10 Fall Creators Update, such as the new compact keyboard, and new emoji selection panes. Of course, the touchscreen also helps you get your hands off the keyboard during those busy times.

At the end of the day, the Lenovo T470S is a bit pricey but is still a great laptop for Windows Insiders. It is not overly fancy and comes with excellent specs that make the unit future proof, a plethora of ports, a great keyboard and trackpad, and an excellent display. Battery life will also last all day, ensuring that you'll never miss a Windows Insider build. You can purchase the Lenovo T470S from Lenovo by checking here. Base prices on the unit start at $1,079.10, with a more expensive option of $1,502.10. 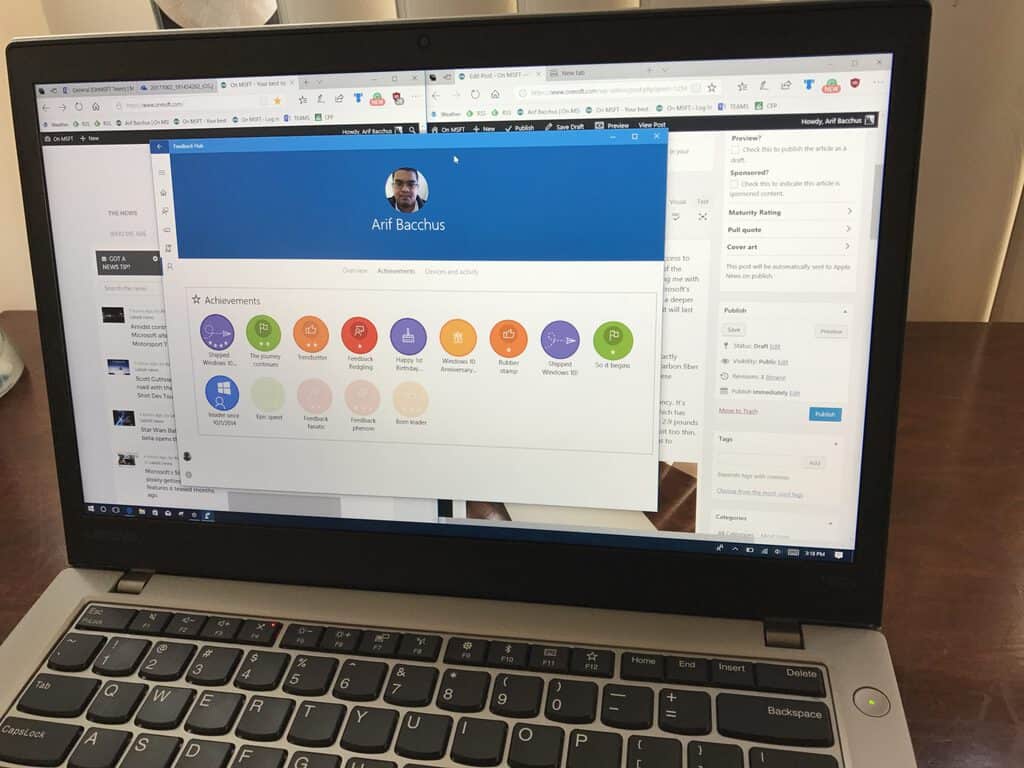