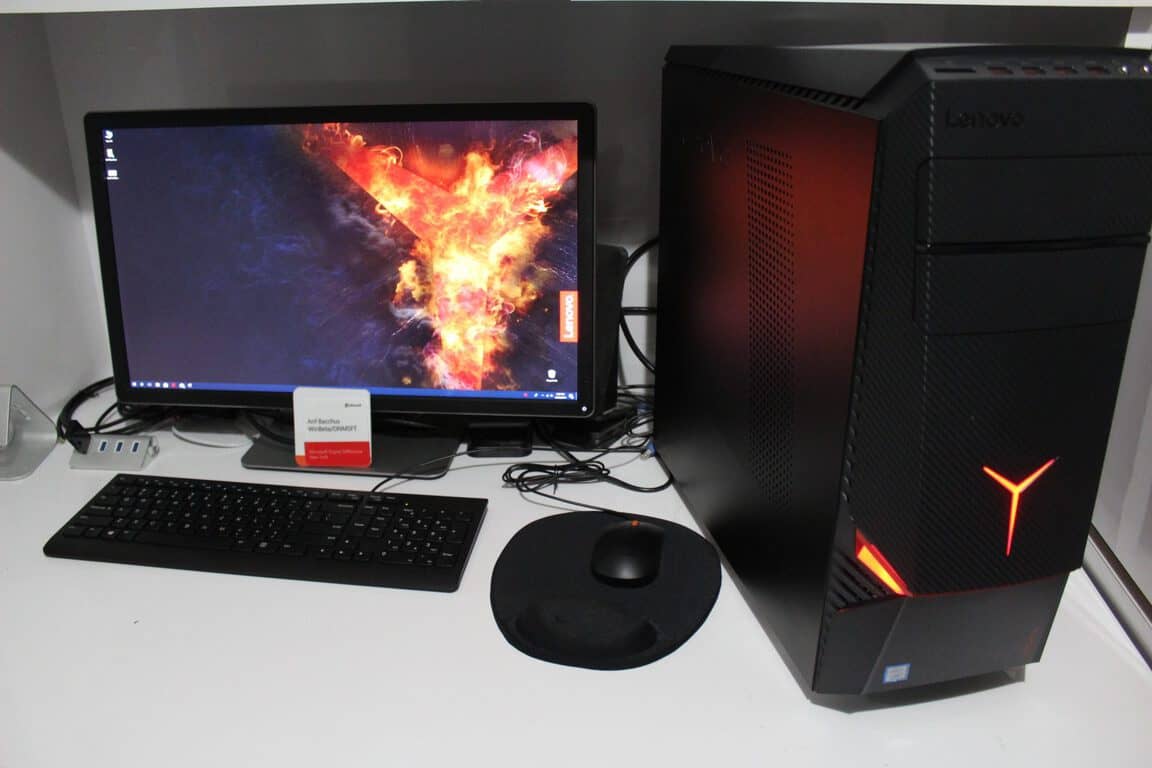 The Xbox One X may be the most powerful gaming console in the market, but with the Xbox Play Anywhere program, some may still prefer playing the latest hit games on a Windows 10 PC. There are many PCs which can handle these types of titles, but joining the Legion Y520 and Y920 gaming towers in Lenovo's gaming lineup is the Legion Y720 tower. Coming with great specs this midrange gaming tower packs everything a mainstream gamer will ever need. Even better, the level of customization and graphics card make it a desktop PC that gives big power to all PC gamers.

Specs for the gamers:

Coming with Windows 10 Home, the unit sent to me for review is powered by the Intel Core i7-7700K Processor clocked at 4.2 GHz. It came configured with 16GB  RAM, and a 256GB Samsung M.2 PCIe NVMe SSD, plus a 2TB HDD for game storage. For graphics, this gaming desktop is fueled by the powerful NVIDIA GeForce GTX 1070 with 8GB GDDR5 memory. These specs are far beyond what you'll find in the standard productivity desktop, making this the ideal package for gamers who need all the processing power when playing the most demanding titles. Although it does not come with Oculus Certification like the Y920 Tower, these specs still make it the perfect system for Windows Mixed Reality and Virtual Reality.

With certain configurations and listed prices starting at $899, you won't initially be spending a lot of money on this machine. It is a lot to take out of the wallet, but pricing is slightly cheaper than some similar midrange options from other OEMs, including the Dell XPS Tower Special Edition 8930 which starts at $999, or the HP OMEN 870 which is also $999 for a starting price.

Other configurations include a unit with the Intel Core i7 7700, 16GB RAM, 1TB HDD, 128GB SSD for $1,487. There's also my review unit with the specs mentioned in the section above for $1,849.99. The differences between each of these models are very subtle, coming down to a graphics card or processor and storage space. With this so, bear in mind you can always go with a basic unit at first, and then upgrade it to higher specs later on with your own parts.

Built and designed with customization in mind:

The last thing a PC gamer wants is to take the unnecessary step of using tools in order to open up their machine and max out performance. Luckily the Legion Y720 Tower was designed with customization in mind. To customize this rig all a gamer needs to merely slide a switch at the back of the unit, push a button on top, and then release the side cover for full access to all internal components. This reveals the inner chassis, which has a neat cable management system, extra slots for up to 32GB RAM, and more room for bridging additional graphics card, hard drives, and cooling systems.

For that extra peace of mind, a user can even remove the front panel for access to the fans and optical drives. The tool-less design is a beautiful sight, especially at a time when more and more manufacturers are locking down their systems and preventing users from upgrading components.

Physically speaking, the design of the Legion Y720 tower is also beautiful. It's definitely heavy at 31 pounds, but there is a metal grill on the left side with ventilation holes allowing you to peek into the inner workings of the system while it's running. The right side has a solid metal non-removable plate, and the front carries the familiar plastic-carbon-fiber esque waved checkered pattern that Lenovo uses in their gaming lineup. The top takes that same design, with a solid plastic plate around the power buttons, a handle around the back, and then a waved grill effect directly above where the ventilation and cover eject button is located.

There's also a Legion Y-series logo on the front of the unit (nearly-identical to an inverted Mercedes-Benz logo) which can light up red. The same LED carries over to the bottom side of the front, directly over the ventilation areas. All around, it's a solid design and build that's not too fancy and also not too boring.

A plethora of ports:

Just as how the build and design give power to a gamer, the number of ports on this desktop tower also does the same. Anyway, we begin with the front of the unit, as it's the place most gamers will be focused on while using their rig. There is an SD Card Slot, two USB 3.0 ports, and two USB 2.0 ports. Also on the front is a headphone jack and a microphone port.

I actually appreciated the USB ports on the front, as the lack a built-in Xbox wireless transceiver meant that I had to plug my controller in via USB. Of course, there is room for two CD ROM drives in this unit. My unit came with one CD drive, but there's room to expand to two if deemed necessary. Also, an added plus, since some classic games are CD-ROM based.

On the back, things get really busy. On the top, there's two classic USB 2.0 ports and a classic PS/2 port for a keyboard or mouse. Under that, you'll find four USB 3.0 ports and the ethernet jack. Finally, there are the sound ports, optical audio port, and then the display input ports (three display ports, one HDMI port, and one DVI port on this unit) I appreciated these mass selection of ports as they mean you can connect multiple monitors to this machine, or multiple speakers, again, giving power to the gamer for the ultimate gaming set up.

Coming with the Intel Core i7-7700K Processor, a total of 16GB DDR2 RAM and also the NVIDIA GeForce GTX 1070, the Legion Y720 Tower is a powerhouse workstation. I was easily able to play Forza 7 in a small window and even multitask in Edge without any lag or performance issues. Forza 7 held continuously at 60FPS even with YouTube videos and other memory-hungry tabs open in Edge. Simply put, the Legion Y720 gives gamers power for those times even when they're not gaming. It's an excellent option for content creators, as well as gamers.

The NVIDIA GTX 1070 graphics card is also an added plus since it is powered by the latest Pascal architecture. It is crafted using a die-cast aluminum body and uses vapor chamber cooling technology that pushes all heated air outside the chassis via a rear exhaust, keeping the inside of the Y720 cool. Overheating is not a worry with the Legion Y720 Tower.

You can see the specs below for more on the performance aspect of this machine. The Geekbench 4 specs place this device over the 12000 mark on a standard budget gaming desktop, and the six-digit open CL score blows open an entirely new level of performance for gaming. As usual, the higher the score, the better, and you can check out the full technical details on these reports by checking the links below.

Gaming wise, the Legion Y720 tower lives up to any expectations the average gamer might have. There might not be support for any CPU overclocking capabilities, but it's honestly not needed. Forza 7 is currently one of the most graphically demanding titles on Windows 10, and I was able to enjoy it with all of the in-game settings maxed out. The fans in the system did get loud, but the NVIDIA GeForce GTX 1070 is a real beast of a graphics card, and it easily powered Forza 7 in full 4K at 60 frames per second without any frame rate drops or lags during gameplay. The same applied to other Steam games which I tested too, including GTA V.

As seen in the image below (it's hard to capture the true beauty,) races on the Legion Y720 tower were extraordinarily beautiful, even more so than when I reviewed and played Forza 7 in 1080p on my Xbox One. It was thrilling to see how the system was able to handle the most elegant details, including reflections from the sunlight in the cars, grass blades coming up at Daytona, or the shimmer and reflections from the lights in night racing and puddles from the rain.

Less demanding games like Super Lucky's Tale and also looked great and ran great on the system. Honestly, I was never one to believe in the PC Master Race, but I preferred gaming on the Legion Y720 because of the way it handled 4K graphics and gaming. Microsoft's Xbox Play Anywhere program also meant I could play some of the Xbox Games I already owned right on this machine by downloading through the Microsoft Store. I even enjoyed playing Gears of War 4 in Full 4K and at 60FPS with my coworker via Xbox Live without any issue or lag whatsoever.

A unique feature of the Y720 Tower is the Lenovo Nere Center. This software gives gamers the power of customizing the Y720 Tower to their liking. You get a quick glance at overall system CPU, memory, GPU, and storage specs, and the ability to customize and adjust RGB keyboard lighting effects (if one is attached.) There are also options for ramping up the fans on the system to keep it cool, and a Network Priority mode to give games better access to your network.

I previously wrote about Lenovo Nerve Center in my review of the Legion Y920 Gaming laptop, but I'm glad to see it return to the Y720 Tower. This software is what a gamer needs when keeping an eye on system performance, and also customizing keyboards and other areas of the gaming experience. It's also cool to see the option to turn off the Red LED lights on the front, which can get a bit too bright in the night.

Conclusion and the bad:

At the end of the day, the Legion Y720 Tower is a reliable option for veteran PC gamers and newbies looking to get into the PC gaming market. It's a system that's easy to customize, and the power of the graphics card help make it a 4K capable gaming machine.

It's hard to say something bad about this machine, but I do wish it came with a gaming keyboard and mouse as standard, and I also wished it came with the ability to overclocking the CPU. However, for a midrange gaming desktop, this is alright. Finally, yes, the system will get loud, but it's a true gaming powerhouse, especially with the 2TB HDD for games, and the SSD for the OS. Prices start at $899, but you can buy the model I reviewed here from Lenovo for $1,849.99.