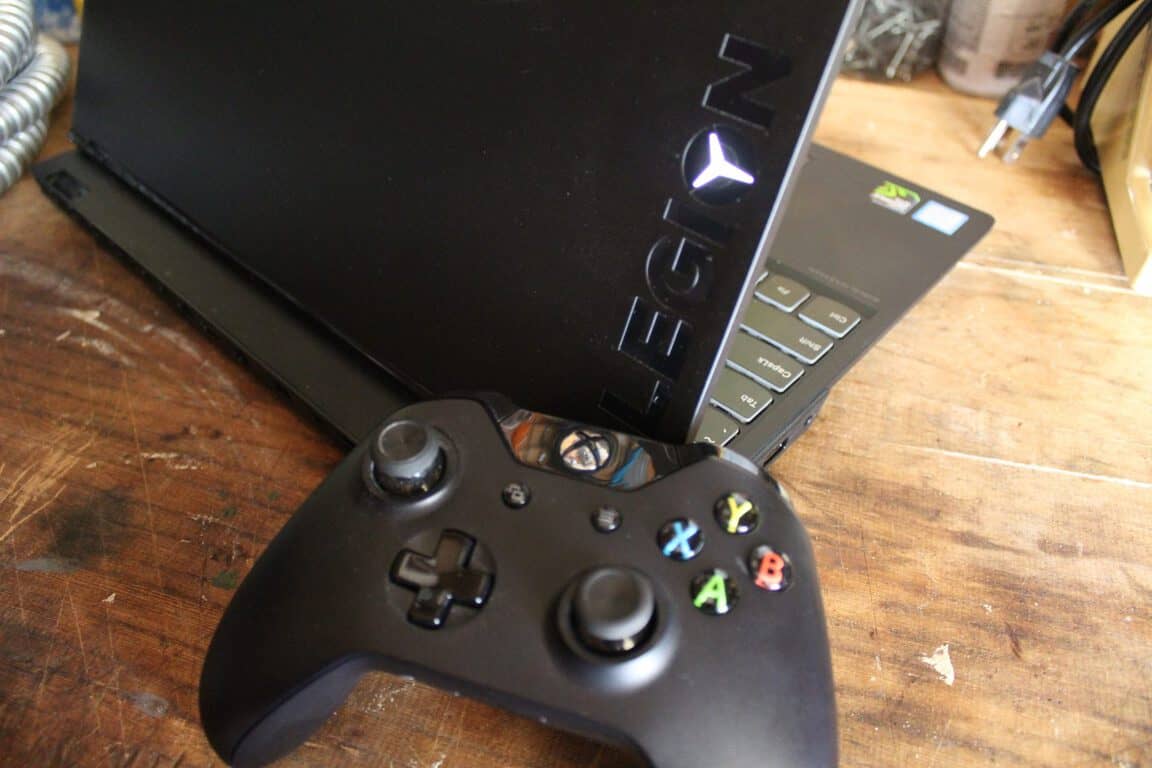 Just a couple of weeks ago, Lenovo announced a series of newly revamped Legion gaming desktops and laptops. These devices are completely redesigned from the bottom up, and Lenovo was kind enough to send me an entry-level Legion Y530 laptop for review. After spending the last month and a half with the device, I’ve found that its design and performance make this the gaming laptop that I’ve always wanted.

The unit sent to us is available from Lenovo for a modest $899, but pricing also starts at $749. It comes with Intel’s 8th Generation Core i5 8300H processor clocked at 2.3 GHz and a total of 8 GB DDR4 2666 MHz RAM installed. It also has the NVIDIA GeForce GTX 1050 Ti graphics card with 4GB of memory, and Windows 10 Home pre-installed. Other important specs which we will touch on throughout this review can be seen below. 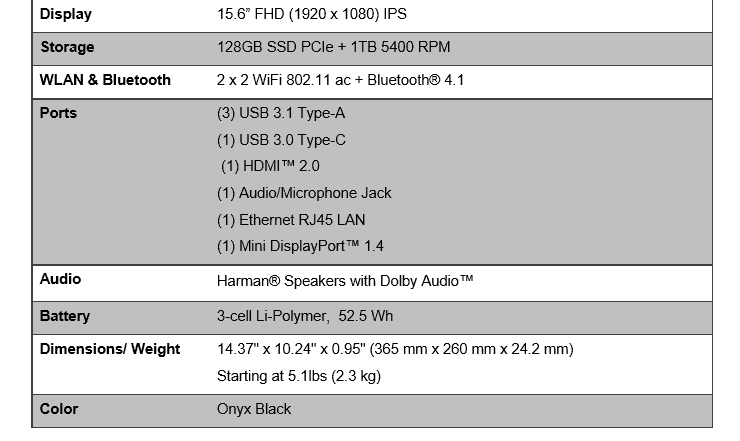 The remaining specs (via Lenovo)

For 2018, the Legion lineup it less flashy and more casual and premium looking. Gone is the thick bulky design that I mentioned in last year’s review of the Legion Y920, and new is a thin and light industrial-looking design. These are both something that I’ve always wanted in a gaming laptop, in that it doesn’t scream “hey I am a PC gamer!”

Anyway, the Legion Y530 has the feel and look of a ThinkPad, but with some subtle touches. It comes in at 5.1 pounds and is made of black colored ABS plastic, with the insides having a nice rubberized texture. There’s also a cool (what I call “slate”) effect where the front of the device is tapered and sliding out from the back where all the gaming ports are located.

On the outside lid, things are also simple with a rough brushed plastic finish. There’s no metal on this unit, but there is a cool Legion Logo in which the “O” lights up white when the device is in use. The white glow might be a nod to Apple, but the logo is very subtle and doesn’t really stand out much.

The top of the Legion and my Xbox controller

The same can be said for the underside chassis, where you’ll find the plastic cover and cooling vents. Lenovo says there are two larger dual fans on this unit, to keep air moving and the GPU and processors cooler and more efficient. The vents are under a metal grate, and I noticed that it did get warm in my lap while gaming. This is actually good since it keeps the heat away from the top, and meant the fans were doing its job. The fans are also separated from each other, and Lenovo says this helps reduce vibration and lower noise.

The underside of the unit

Similar to a gaming console, Lenovo manages to pack in tons of extra ports on the rear back side of the Y530. It’s a nice touch that made cable management easy, especially since I ended up using a wired controller due to the absence of a built-in Xbox Wireless Receiver on this unit.

Starting on the left side, you’ll find a USB 3.1 Type A port, and the headphone and microphone jack. These are just the simplistic ports here and there is not much to say. On the right side of the device is another USB 3.1 Type A port. Again, it’s the lone port on this side of the device, but it could be the ideal spot to plug in a controller or that Xbox Wireless Receiver.

Ports on right and left side

On the back, things get really busy. Going from left to right, there is a USB C port, a Mini Display Port, USB 3.1 Type A port, HDMI port, Ethernet RJ45 LAN port, the power port, and then the Kensington Lock. It’s great to see the inclusion of USB C since you can connect it up to a 4K monitor. At the same time, it’s nice to see both HDMI and Mini Display, as it meant that you won’t need to get a dongle to connect to your older monitor.

Ports on the back

More and more laptop manufacturers these days are embracing the bezeless look, and that is exactly what Lenovo does here with the Legion Y530. The company has slimmed down the bezels on this year’s Legions devices by 62%, making the 15.6-inch display plenty spacious for my daily workflow and gaming.

At 1920 x 1080 FHD resolution, the display on the Legion Y530 seems reminiscent of the Dell XPS 15 since there are minimal bezels and a webcam on the bottom middle side of the display. Unfortunately, it doesn’t get as bright as the Dell XPS 15 when on battery, and you’ll need to plug into an outlet to get the most performance out of this display. Also, this unit has a 60Hz refresh rate, but Lenovo says some models support NVIDIA G-SYNC and a refresh rate of 144 Hz (not the case on my unit.)

Playing Forza 7 on the Legion

This is all expected for a budget-range gaming PC and it is not to say that the display is bad. I still enjoyed gaming on this device when it was plugged into power. When I was playing Forza 7, the sunlight at Daytona realistically shimmered right off Chase Elliott’s NAPA #9 car, and the shadow replication from night racing was very realistic. Similarly, when playing GTA V, the flashes from gunshots and colors in characters skins were realistic looking.

Though I spent most of my time gaming, I also enjoyed working on the device. I was able to stack my windows side by side and enjoy the maximum amount of multi-tasking space. It is definitely a massive improvement over the screen on the Y920 which was “bezel-tastic” and felt like a huge waste of space. This is something I’ve always wanted in a gaming laptop—slim bezels, and more room for gaming and work.

Working on the Legion

Most gaming laptops have a mechanical keyboard, but Lenovo thinks different on the Legion Y530 by opting for a less flashy chicklet style keyboard. Everything is laid out in an island-style format, with the number pad being set off the right side. The keys are also soft to the touch, and easily jam down into the chassis with minimal effort. I was able to hit a typing speed of around 100 words per minute, which is what I’ve seen on most other Lenovo devices. The keyboard is also backlit in white in up to two levels, and there’s no flashy RBG lighting.

The trackpad, though, is rather smaller than I expected it to be. It is a precision trackpad and supports the usual Windows 10 gestures, but the left and right buttons are very hollow and make a very annoying clicking sound. It is a big let down, but I assume Lenovo thinks most people might just attach an external mouse with the Y530 instead of using the trackpad.

This all might be due to Lenovo wanting to keep things simple and more like a traditional laptop. Professional gamers might want to connect an external keyboard and mouse, but for the casual gamer, the set up might be good enough for both work and also play.

Included on the front of the Legion Y530 are Harmon speakers with Digital Audio. Since the speakers are forward facing, it provided for one of the best audio experiences I’ve ever had on a gaming laptop. Gunshots during my battles in GTA V online rattled through the chassis and into my desk, and the roar of stock car engines at Daytona in Forza 7 made me feel like I was sitting in a race car. I did need to be careful with my volume levels though, as high settings would distort the sound, especially when listening to music with a lot of rock and jams.

Similar to the Lenovo Nerve Center from last year’s legion devices, the pre-installed Lenovo Vantage software is the home for all things gaming on the Y530. You’ll find a menu showing the status of your CPU, RAM, GPU, and HDD, and your settings options for the cooling boost. There are also links for locking your keys when gaming, and more tools for updating your system and checking on your hardware. It’s pretty nice to have this available, even though task manager and Windows Update already display most this stuff.

The Geekbench scoring for this device puts it above the 12000 multi-core scoring for a standard desktop PC. The Open CL testing is also great, but the GTX 1050Ti is not as beefy enough as it is a budget range graphics card. This means it’s nowhere close to the high scores of last year’s top of the line Y920 which had the GTX 1070 with 8GB GDDR5 graphics and almost double the scoring.

In my time with the Legion Y530, I played Forza 7, GTA V, and State of Decay 2. When amped up to medium or recommended settings, both Forza 7 and State of Decay 2 held well at about 60-65 frames per second. Tuning the graphics settings to ultra (and sometimes even high) would knock down the frames in these games to 30 per second and cause minor freezing and stuttering.

During gaming, the GPU was kicked up to 70% and fans kicked in really quick on all graphics settings levels, keeping things cool, but loud. I guess it what happens when you have all this tech jammed into a small ABS plastic chassis. This brings me to say that the GTX 1050Ti is good enough for casual gaming in PUBG, and Windows Store games, but it’s not something for powerhouse games. For instance. I managed to play GTA V at around 60 frames per second, but on the much more powerful GTX 1070 from last year the same game got me to 75 frames per second.

Again, this is a budget gaming laptop, so most buyers won’t notice or feel the difference. If you’re keeping the game to its recommended settings, you’ll be fine. And if you’re adventurous enough, you can still play demanding games, but with the settings tuned down. You also can try this laptop with Windows Mixed Reality or Oculus Rift as it passes all testing, but I didn’t have a headset to try it with.

In terms of non-gaming, the Y530 was able to handle anything I threw at it. It was able to render the photos I’ve used in this post without any issue, and it easily handled my daily workflow of using 10+ multimedia tabs in Edge. The only complaint is with the WiFi, as it seems to be finicky if you’re not close enough to your router. It was rough at first, but an update to the latest Intel drivers resolved my issues.

Coming with such a beefy processor and big display, the battery life on the Y530 is not the best. When not gaming, I got anywhere between 2-3 hours of usage on recommended settings and a medium brightness level. When gaming, things were even worse at 1.5 hours. I guess it’s best to keep your charger and live near an outlet.

Putting everything together, the Legion Y530 is a solid laptop for the casual gamer. You can get a solid 60 frames per second on most games, and decent 30 frames per second on higher demanding titles. The build and design of the Y530 also aren’t fancy and flashy, and the keyboard is good enough for both work and gaming. Plus, there is a ton of ports for connections to your accessories, and the slimmer display means there’s more room for work and play. There might be a dim display when on battery, and initial faults with the trackpad and WiFi, but those are issues problems that you can get used to with time and patience. For prices starting at $749, you can’t go wrong.