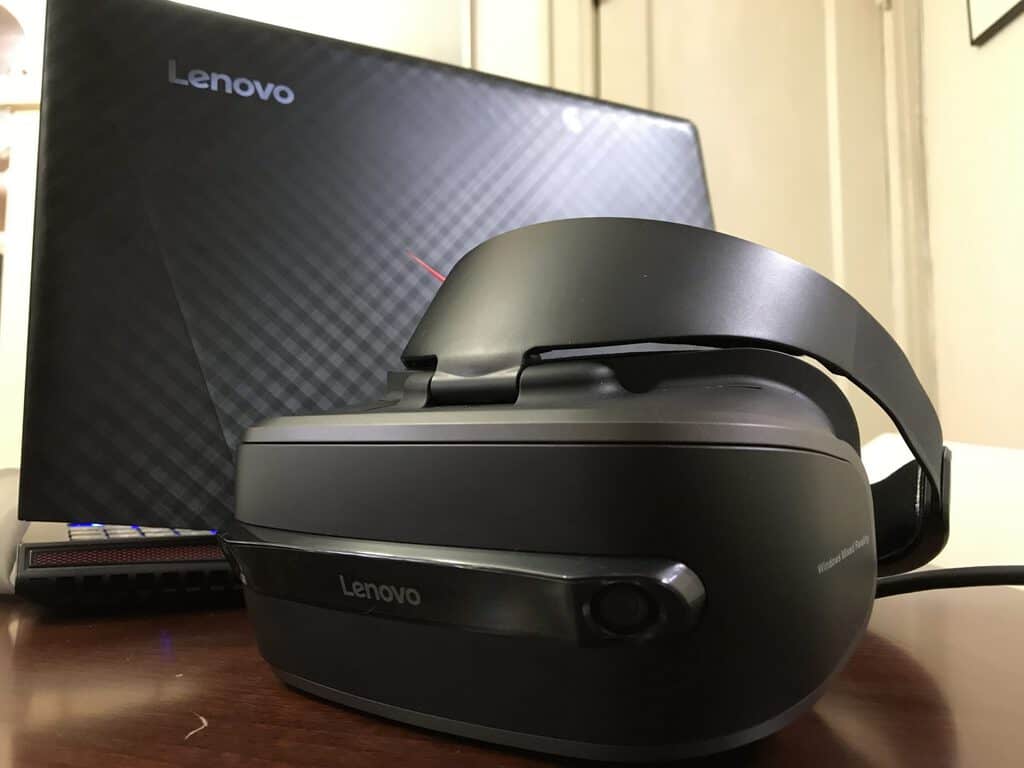 I initially had a hard time believing in Windows Mixed Reality before trying it out for myself in person. Just from reading specs on paper, I honestly feared the inbuilt Windows 10 Mixed Reality experience would be problematic. While also looking at store listings and photos, I even found the wide range of headsets from Dell, Asus, HP chunky and gimmicky. This all changed over the past month when I was provided with a Lenovo Explorer review unit. As with most things in life, you need to try it to believe it. Thanks to the comfortable and affordable Lenovo Explorer, I'm now a believer in Windows Mixed Reality.

As I highlighted in my unboxing post, the $399 Lenovo Explorer shares similar specs to the other Windows Mixed Reality headsets, but without breaking the bank. It packs two 2.89 inch LCD displays at 1440 x 1440 resolution, measures 7.3 inches x 3.7 inches x 4 inches, and weighs 0.84 pounds. The headset also packs two motion-sensing cameras, a P-sensor, Gyroscope, Accelerometer, Magnetometer, and uses inside out tracking for a 110-degree field of view.

For connectivity, the headset depends on a 12 foot long Y cable, with HDMI and USB 3.0 connections to a Windows Mixed Reality capable PC. Combined with the sensors in the headset, this eliminates the requirement of placing sensors in the room to use the headset. There's also a 3.5mm headphone jack on the headset, allowing you to stream audio from your PC via a headphone while the headset is worn. The cables are well managed and clip to the side, never getting in the way of my head, hands, or feet while I was using it both seated, or standing (as we explained in our set up guide.)

Hardware designed with comfort in mind:

Contrary to my initial thoughts before having a physical unit to try out, the Lenovo Explorer is very comfortable, mainly because it does not depend on straps to connect to your head. The headset is instead held with a large padded plastic hinge mechanism on the front, while also staying attached to the back with an adjustable clamp. Made of a simple dark grey colored plastic, the headset is very light and comfortable to put on and take off. The only point where the plastic breaks free is at the front, where there is a glossy housing for the sensors, the camera, and the Lenovo logo.

For extra comfort, there's plenty of soft foam padding running on the inside of the headset, and along the back and front where it grips on to the back and top portions of your head. People with glasses should enjoy the Lenovo Explorer, as there is plenty of wiggle room inside of the front housing where the lens meets your eyes. Unfortunately, though, the foam strip separates a bit on the bottom where the headset meets the nose. This makes the foam piece on the nose a bit lose, and I worried it might have fallen off. There's no light bleed, though, which is a good thing for long sessions with the headset.

Interestingly, all Windows Mixed Reality headsets (including the Lenovo Explorer) do not depend on moving parts or a focus knob to adjust the clarity of images. Everything is calibrated via software, and the only moving parts on the headset are a hinge to move it up and down for when you'd like to enter/exit use, and a knob on the back to tighten it or loosen it after you put it on your head. As I discuss later, the calibration is spot on, and I never once had to adjust the headset once I had it on for use.

Bundled with the Lenovo Explorer headset is the Windows Mixed Reality motion controller. As I highlighted in my companion guide to the world of Windows Mixed Reality, these controllers are critical to the experience of the headset, virtually appearing in front of you in the virtual world. Even though you can also use an Xbox Gamepad or mouse with the Lenovo Explorer, the motion controllers are best for navigation. It takes some getting used to, but over time I familiarized myself with the design and layout of the buttons and it felt natural to use.

The controller is ergonomic, feeling very reminiscent of Nintendo's Wiimote. The controller features a touchpad, a thumbstick, a select button, menu button, windows key, and a bumper button. They're powered by AA batteries, and connect via Bluetooth 4.0, with battery life going a few weeks.

To my dismay, the controllers are just made of a solid piece of plastic and have no grips. Since the design is standard across all OEMs, you can't blame Lenovo, and it is what it is. The good part is that there are some Wii-mote esque straps which will help keep the controller attached to the wrist. The straps do help since things got slippery and messy as my sweat built up on the smooth plastic side of the controllers during long gaming sessions.

There's also no option to recharge the controller directly, but the pin connectors on the battery compartment hint that a rechargeable battery pack may be coming soon.

You can use it with most modern Windows 10 PCs:

The key selling point of the Lenovo Explorer Windows Mixed Reality headset is that it can be used with most modern Windows 10 PCs with the Fall Creators Update installed. Recommended specs for Windows Mixed reality are available here, but I was provided a Legion Y720 Gaming laptop with the headset. After trying it on multiple PCS, this is what made me a firm believer in Windows Mixed Reality--- you don't need fancy equipment to enjoy the experience. Yes, the fancy laptop will make for better gaming experiences and refresh rates, but the experience will otherwise be the same regardless of the type of PC you use.

Anyway, the Legion Y720 was excellent for my Windows Mixed Reality experience and you should consider it as part of a bundle option if you're looking to get the best possible Mixed Reality experience. Although much more affordable and cutting out features like a mechanical keyboard and Turbo mode, the 15.5 inch Legion Y720 with a 3840 x 2160 display is very reminiscent of the Legion Y920 which I previously reviewed. I was not able to get some SteamVR for Windows Mixed Reality games working, but the performance was still great, and I was able to multi-task and play games like Forza 7 or GTA IV without any issue.

The Legion Y720 comes with a 256 GB SSD + 1TBHDD for games, Intel Core i7 Processor clocked at 2.80GHz, 16GB RAM, and NVIDIA GeForce GTX 1060 and Intel HD 630 Graphics. Geekbench 4 scoring is seen below, the higher the number, the better, though they're both above the standard 12,000 multi-core mark for the average laptop gaming PC.

After a while, the headset felt natural and felt as if it was just there. I didn't need to continually adjust the headset, as the Legion Y720 laptop and the Windows 10 Mixed Reality portal handled all the software related aspects of virtual reality without any lag or freeze. With a laptop like the Legion Y720, I was able to enjoy the full Windows Mixed Reality experience without issue, complete with the 90Hz refresh rate.

At the end of the day, the Lenovo Explorer is a solid headset. It's very comfortable, and is the ideal Windows Mixed Reality headset to give as a gift or to try for yourself. You can use it with almost any modern Windows 10 PC and enjoy the world of Windows Mixed Reality without tripping over cables or having to deal with lag from a laptop. You can buy the Lenovo Explorer from Microsoft today for $399.

Get in the gaming spirit with 12 Days of Minecraft