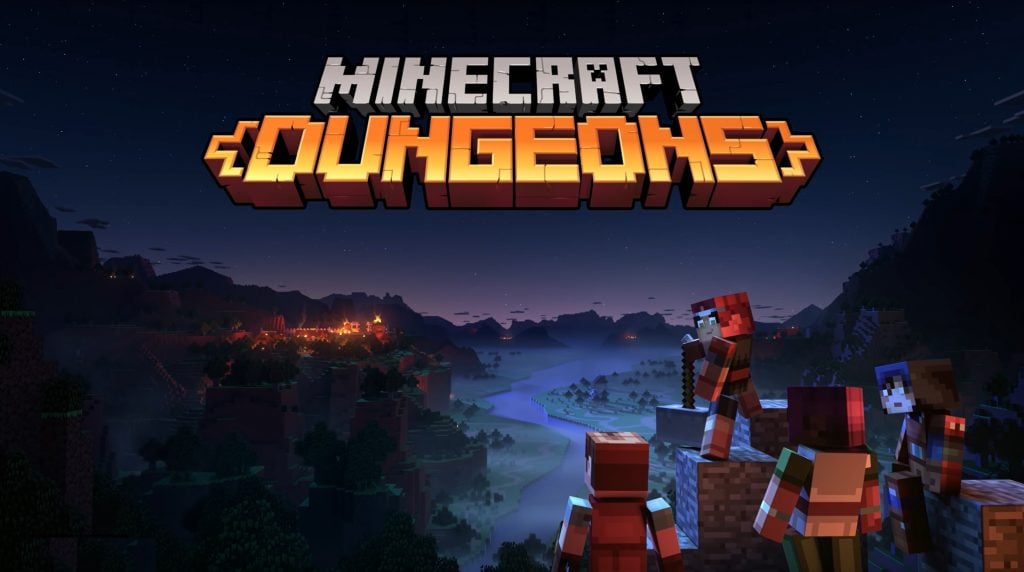 Minecraft developer Mojang was one of Satya Nadella’s first big acquisitions after the Microsoft veteran took the reins of the company back in 2014. In hindsight, this $2.5 billion deal was a brilliant move. Indeed, the software giant acquired what has since become the most popular video game of all time, with 180M copies sold and 480 million players as of November 2019.

Minecraft is available on all platforms today, and it’s also being used by teachers as a vehicle for learning. The game remains incredibly popular with kids, and you can also find tons of gameplay videos on YouTube, or gamers streaming it live on Twitch.

Still, there are probably a lot of consumers and gaming enthusiasts who never got into Minecraft. How could a game with such dated (some would say hideous) graphics remain so popular after all these years? Well, the Mojang’s game is finally getting ray-tracing support on Windows 10 this year (a beta is now available), but there’s no denying that Minecraft is still not a game for everyone. It’s quite difficult to get started without reading tutorials, and unlike other game genres, the sandbox game isn’t something that’s immediately fun and gratifying.

As you may know, Microsoft recently showed that it’s willing to push Minecraft in other directions, starting with the AR game Minecraft Earth last year. This one didn’t exactly set the world on fire as Pokemon Go did years ago, but Minecraft Dungeons, a new Minecraft-themed dungeon crawler to be released on May 26, could be a whole different story. We went hands-on with the closed beta this week, and it does seem to provide the immediate sense of fun that regular Minecraft still lacks. 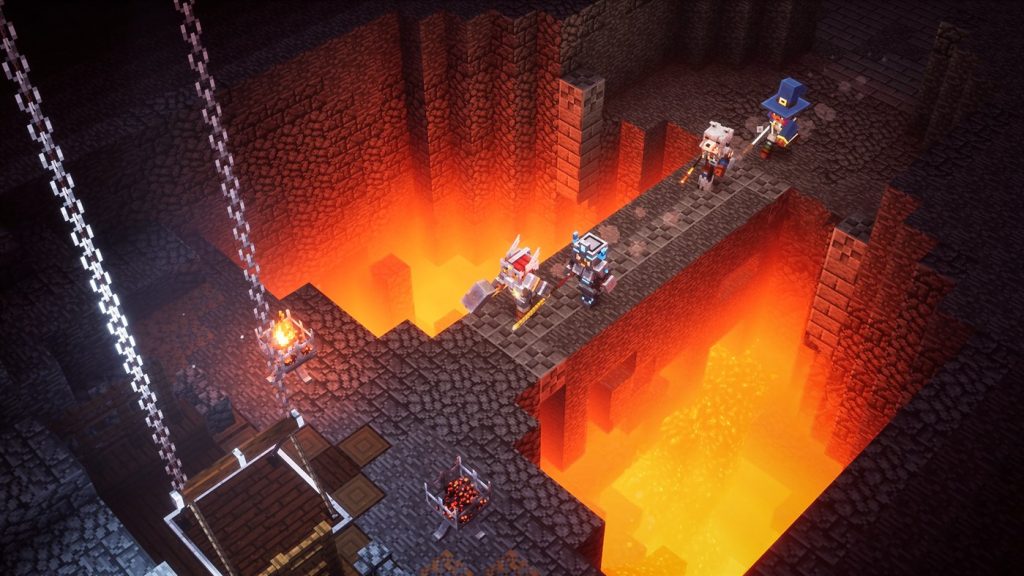 The most accessible Minecraft game ever?

Minecraft Dungeons has often been compared to Blizzard’s Diablo series, and there’s definitely some truth to that. It’s a dungeon crawler, which is playable in solo or multiplayer with up to 4 people. During the campaign, you’ll have to complete different levels that are procedurally generated, and the world map in the beta includes 9 different biomes in total.

Except for the tutorial, only two missions are available in the closed beta, and they happen in two different biomes called “Creeper Woods” and “Pumpkin Pastures.” Before starting a mission, though, you’ll first have to create your character: There are no character classes in Minecraft Dungeons, so the only way to customize your character is by choosing a skin, and then finding loot.

Once you’ve chosen your character skin, you’ll start in a village where you can choose your mission, and you can also find merchants in the village for trading emeralds earned during missions in exchange for randomized loot. The two missions in the closed beta are pretty straightforward, and I finished them in a couple of minutes. You’ll be given mission objectives such as freeing villagers, and of course, you’ll find a lot of Minecraft-themed monsters along the way: zombies, spiders, and skeletons are all there, though the evil villagers (“illagers”) will probably offer a better challenge. 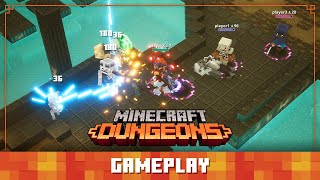 Minecraft developer Mojang was one of Satya Nadella’s first big acquisitions after the Microsoft veteran took the reins of the company back in 2014. In hindsight, this $2.5 billion deal was a brilliant move. Indeed, the software giant acquired what has since become the most popular video game of all

To be clear, there’s no building or crafting in Minecraft Dungeons. You’ll just have to kill monsters again and again and find better loot to upgrade your equipment and capabilities. You can also equip three artifacts that give you special abilities, with each of them having a cooldown period. As an example, I found a flaming quiver giving me burning arrows, as well as magic boots giving me a speed boost for a couple of seconds.

The progression system in Minecraft Dungeons is quite different from the one in Diablo: instead of unlocking new active and passive abilities with every new level, you’ll unlock enchantment points for your gear. As an example, I used an enchantment point to unlock a chain enchantment for my weapon, which gave me a 30% chance to chain close enemies and keep them bound for a short time. I also used another point to unlock a potion barrier enchantment for my armour, allowing me to take 90% less damage for a short duration when using healing potions. Moreover, I upgraded my bow with a multishot enchantment giving me 20% chances to fire five arrows at once.

Personally, I think a Diablo-like class system with clearly differentiated characters probably offers more depth and replayability, but the loot and enchantment system in Minecraft Dungeons should still provide lots of customization options and possibilities. Because Minecraft Dungeons has been designed as a family-friendly game (for ages 10 and up), the gameplay is quite easy to understand, and the game itself is pretty easy, too: there’s no game over, and when you die you’ll just respawn not far from the monster that killed you.

Is it fun to play?

I only played the Minecraft Dungeons closed beta in solo, and I did find the game more fun than regular Minecraft. Dungeons plays great with a controller (mouse and keyboard controls are also supported on Windows 10), and even though you often end up mashing the attack button and the right trigger for shooting arrows, killing monsters feels satisfying. The game uses the popular Unreal engine, and even though Mojang artistic direction may not please everyone, Minecraft Dungeons does look pretty unique.

Again, there are just two levels you can play in this closed beta, and you can complete them multiple times in higher difficulties to gain more valuable loot. Creepers, the common green mobs that follow you around and explode when they’re really close to you, are still as dangerous as ever, though unlike in regular Minecraft, their explosions won’t create huge holes into the ground. 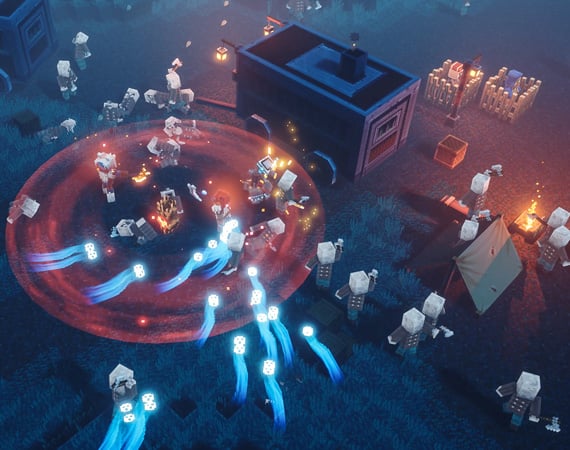 The same can be said for TNT crates, which are pretty rare to find but very effective for quickly dispatching enemies. It’s pretty fun to see enemies flying around after a TNT explosion, but again, what would have caused a huge crater on the ground in regular Minecraft doesn’t affect the procedurally generated Dungeons levels in any way, unfortunately.

The lack of crafting and building mechanisms also seem to be a missed opportunity. A game like Fortnite made building a key element of the gameplay for protecting yourself from others and accessing special areas, but Minecraft Dungeons has none of that. It’s possible that the game could become repetitive pretty quickly, especially if multiplayer is only restricted to a co-op mode.

Overall, if you’re a hardcore Diablo III fan, it’s clear that Minecraft Dungeons doesn’t play in the same category. Keep in mind that this is just a $20 game, and for that price, it does seem to offer a decent amount of fun. Minecraft Dungeons should be great filler content for Microsoft’s Xbox Game Pass service, and it already seems much more interesting than previous Xbox Game Studios titles such as Bleeding Edge or Crackdown 3.

Minecraft Dungeons will also be released on PlayStation 4 and Nintendo Switch next month, and Mojang plans to enable cross-play multiplayer at some point. Unfortunately, the Xbox One version won’t support Xbox Play Anywhere, so you’ll have to purchase the Windows 10 separately or play it for free with Xbox Game Pass for PC.

If you want to get access to the private beta on Windows, you can still sign up on this page. If you’re selected, you’ll also get three invite keys to send to your friends while the closed beta is still live.