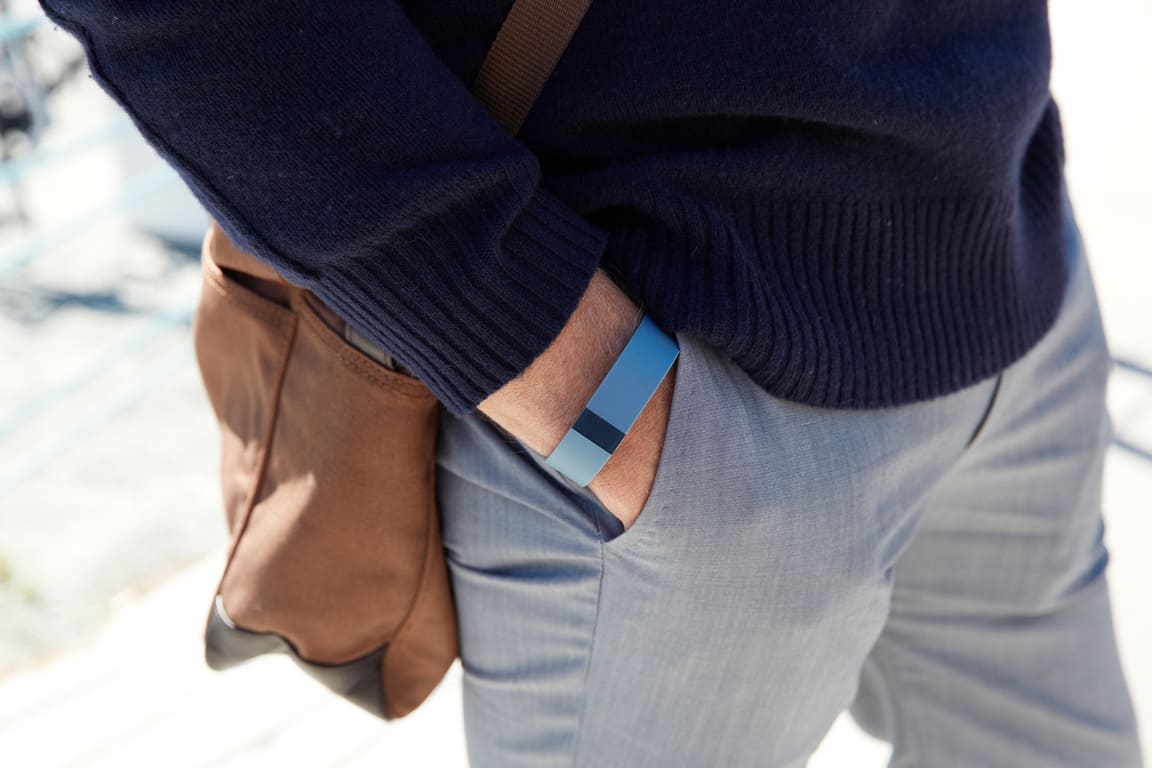 I'll be honest -- I've never been into fitness/activity trackers. I've never had the need to keep track of calories burned or how many steps I've taken. But I was in a dire need of a watch, so when a Fitbit Charge landed on my doorstep for review, I was eager to check it out and see what the fuss was all about.

The package comes with a Fitbit Charge wristband tracker, a charging cable, and a wireless sync dongle which allows you to sync your device to your PC or tablet/laptop. My first impressions -- the wireless device looks and feels fantastic. It is light weight and comfortable to wear.

The Fitbit Charge is designed to track your day by keeping record of your steps, the distance you have traveled, calories burned, as well as the current time. You can even wear your FitBit Charge at night to track your sleep, see how many times you wake up, measure your sleep quality, and even set a silent vibrating alarm to wake you up.

The Fitbit Charge also features an online tool, allowing you to see your progress with beautiful charts and graphics, as well as the ability to share and compete with friends, earn badges for accomplishments, and log your food and workouts. If the website is not your cup of tea, you have the mobile app, available for Windows Phone devices.

As I mentioned at the intro of this review, I have never been one to ogle over a fitness tracker or wireless activity band. However, when the Fitbit Charge landed on my doorstep, I opened up the bad boy and placed it around my left wrist. It felt comfortable and was easy to set up with my PC. All I had to do was plug in the wireless dongle and connect the Charge to it. Within seconds, the two were paired and I was all set to wear my new Charge.

What I initially liked the most was the fact that it displayed the current time -- replacing the need to wear a cheap watch or having to dig out my cell phone to look at the time. The Charge looks sexy and it shows the time -- and that's all I really cared about when I first wore the Charge.

One day, I was walking around a lot -- more than usual -- while at work. In fact, I was walking so much, running around for meetings, that I felt my Charge vibrating on my left wrist. I was in shock for a second, because at the time, I had no idea that the Charge vibrated. I looked at the device's display and it was flashing "10,000." I had apparently walked 10,000 steps that day. Amazing. But, this isnt all that accurate and I'll get into that shortly. You can set goals via the website or the app and your device will vibrate once you reach that goal.

I've worn the device every day for the past several weeks since the device was sent to me and I have received nothing but compliments from family members, friends, and co-workers. In fact, several co-workers were interested in checking out the device online and possibly purchasing it, due to the gorgeous design and awesome capabilities. Naturally so, I let them wear my device and not once did I receive a complaint about it being uncomfortable.

The battery life on the device lasts quite a while. In fact, battery life is supposed to be seven to ten days on one full charge (unlike the Microsoft watch which only gives you up to 48 hours on a full charge). I've only charged it one time in the past few weeks. Charging it is a breeze too -- just plug the device into the charging cable and plug the other end of the charging cable into a USB port.

As for accuracy of the stats, you can measure your performance on the Fitbit website or via the mobile app. Don't expect these devices to be perfect, but you can definitely get an idea of how many calories you have burned. It seems to me that these activity trackers track your arm movement and counts that as your steps taken. In other words, the Charge seems to detect arm movement as steps taken, so you are alerted that you have taken 10,000 steps when you really didn't.

I do wish the device had a better display. The small OLED screen is just too small in my opinion. I also did not like that I had to press the only physical button on the device (located on the left side of the device) in order to see the time. I had to press it again to see how many steps I had walked. I had to press it for a third time in order to see how many calories I had burned. You basically press the button and cycle though the available data. You can also double tap on the wristband to see this data but I found my self double tapping repeatedly just to get it to work.

Thankfully, there is a Windows Phone app for the Fitbit Charge. The app is simply called 'Fitbit' and is free. The app also features Cortana integration.

"Track your daily steps and distance right on your smartphone with MobileTrack for supported Lumia devices. MobileTrack accurately tracks your basic activity when you carry your phone. For more in-depth, all day tracking of stats like calories burned, active minutes, and sleep, pair the app with a Fitbit tracker," the app description explains.

With the official app, you can track all day activity, log calories with a credible food database using Cortana, set and achieve goals, and even compete with friends. The app allows you to continuously sync your states with your Windows Phone to give you real-time access to your progress without having to plug the device to your computer.

At the moment, the app requires that you have Windows Phone 8.1 installed on your Lumia device. You can download the app here for free.

If Windows Phone is not your cup of tea, you can also snag the app on iOS and Android. Cross platform compatibility is what makes the Fitbit trackers so attractive, in my opinion.

Then theres the battery life. You can get one weeks worth of battery life out of the Fitbit Charge, compared to 48 hours on the Microsoft Band. This is due to the numerous additional sensors and features that the Microsoft Band possesses. Keep this in mind when making your decision -- do you want to be charging your fitness/activity tracker often?

The Microsoft Band is a bit bulkier compared to the Charge, and definitely costs more money ($199 for the Microsoft Band vs $129 for the Fitbit Charge). So which one should you get? It all depends on how much you are willing to spend. If $129 seems enticing to you, I personally believe you will be happy with the Charge. But, if you can dish out a bit more money, then definitely purchase Microsoft's offering since it offers more features.

Fitbit has various different offerings aside from the Charge -- they have the Charge HR which helps monitor your heart rate for $149; they have the Fitbit Surge which is comparable to the Microsoft Band in terms of features and costs $249; and they have the Flex for $99 which is just like the Charge, except it does not display the time.

In my opinion, the $129 price tag for the Fitbit Charge is decent. If you are in the market for a decently priced activity/fitness tracker, I definitely recommend taking a look at the Fitbit Charge. However, if you are looking for something that is a bit more feature-full, save your money for the Microsoft Band. The Fitbit Surge seems nice but also seems expensive -- perhaps I might change my mind on this once I do a review of it.

Fitbit Charge is compatible with iPhone, Android, as well as Windows Phone, so you do not have to worry about platform issues. The Fitbit Charge comes in three sizes -- small, large, and extra large, and you can get it in black or slate. The Charge definitely has a sexy and sleek look to it, and looks amazing when you are out and about. Majority of the time, people will not know that the Charge is a fitness tracker until you tell them what it does.

As someone who never had an interest in a fitness tracker, I am now regularly wearing my Fitbit Charge. I like it a lot and it has been very informative when it comes to stats. I definitely recommend purchasing it -- it also makes a fantastic gift too!

Among others, Microsoft tries out revolutionary new approach to online ads with the Financial Times