Toshiba may have publicly exited the PC market concluding the sale of its last 19.9 percent stake to Sharp electronics, but similar to the deal between IBM and Lenovo, the qualitative essence of the company lives on under the new branding umbrella of Dynabook.

Dynabook has been selling PCs for a couple of years and in 2022 the company has raised the stakes of its laptop offering with the updated Protege line that now offers the latest Intel chips, premium build quality and memory-heavy customization options for the average data worker.

In a sea of black, aluminum grey and space grey laptops the Tech Blue Metallic version of the Dynabook Protege X40 definitely stands out and with a glossy brushed lid of the laptop adds another layer of distinction for laptop that is slightly undercut by the rather simplistic branding embossed dead-center of the device.

As much as the brushed blue lid is an attention grabber, it’s also a magnet for fingerprints which brings its own kind of unwanted attention for users who have a bit of OCD about the outward appearance of their laptops, like me. When you’re not constantly brushing away fingerprints, you are left hyper conscious about the last place you touched the Protege’s lid. 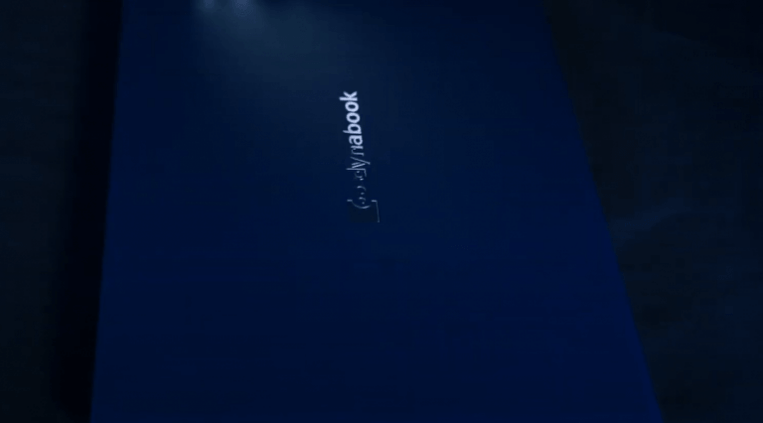 Fortunately, dealing with fingerprints on a lid is of little consequence to the overall experience of the Protege X40 and underneath the lid is a decently vibrant 14-inch 1080p IPS LCD panel with 2017-ish bezels surrounding it.

The Dynabook screen, while lacking OLED or quantum-dot or any other fancy resolution tech, is fine for anyone who is into marking spreadsheets, organizing meetings, crafting presentations or burrowing into 3rd party productivity applications. Unfortunately, Dynabook is keeping the 16:9 aspect ratio-war alive as the company bucks the more recent move towards 16:10 or 3:2 by several other competitors.

Unlike some of the newer ThinkPads that the Dynabook hopes to compete against, the bezels on the display can appear dated to anyone’s who been gifted a company laptop in the last two to three years. Fortunately, companies don’t hand out laptops all that often and switching from a 2017 laptop to a 2022 with similar size bezels will garner equal parts ambivalence and ignorance from employees.

Another moment of “ignorance equals bliss,” is going from devices supporting similar connectivity options. Over the past few years, laptop OEMs have been juggling port selections like clowns with chainsaws waiting as modern audiences wait to see which port gets cut from the next iteration of their beloved device.

Thankfully, Dynabook is thinking of employee convenience here and keeping all the ports that have kept many ThinkPad’s in rarified air, such as a two Thunderbolt 4 slots, full-sized HDMI port, two USB Type-A ports, RJ-45 ethernet port, 3mm audio jack, dedicated DC jack (even though it can be charged via one of the Thunderbolt 4 ports) and microSD card reader. 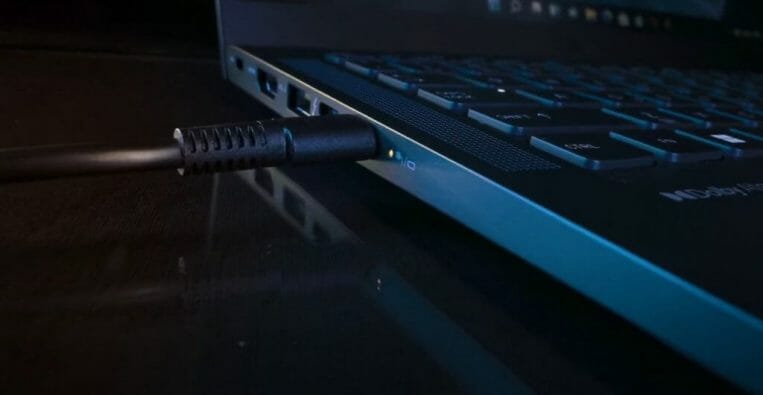 In addition to a bevy of physical connectivity options, the Protege also supports the latest wireless offerings with Bluetooth 5.2 and Wi-Fi 6E for snappy speeds and pairing of additional devices to the laptop.

For anyone coming from the U-style chicklet keys of a ThinkPad or the low-profile Dell Precision keyboards, getting used to the mushier Dynabook key travel will take some getting used. Dynabook does however, offer slightly more space around each of its keys, which helps even the laziest keyboard Typers feel like record-breaking typists.

The placement of buttons along the Fn row will also take some getting used as Dynabook has taken a couple liberties with the placement of items such as an actual function toggle, media playback and power options.

I’m not going to spend too much time on the webcam as it is still is 720p potato smeared experience in 2022.

Loaded with up to 12 cores of Intel i7 power, the Dynabook crushes most data intensive tasks while doing a decent job of rendering GPU laden applications with only a modicum of struggle.

The synthetic benchmarks allow users to see a generic industry comparison between the Protege and what would likely be its competitors sitting on store or digital shelves. 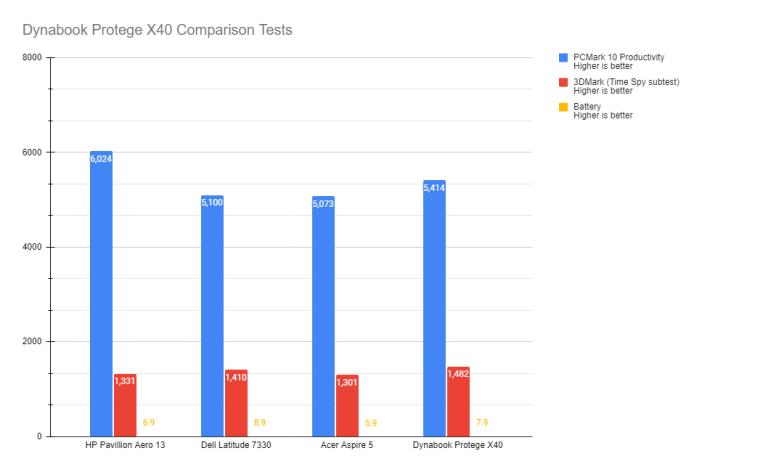 As far real-world performance, the Dynabook Protege X40 is on par with modern productivity laptops with similar battery life and heat distribution. When unplugged the device opts for fan and heat dispersion over throttling which is great for squeezing out more content but killer for a user’s lap and wrists as the laptop gets cooking under duress.

The Protege X40 is meant for data workers and as such the paltry Iris Xe graphics are great for short burst of GPU heavy lifting in specific applications but is not great for gaming or content editing. With Intel’s i7, 12 cores and up to 64GB or memory, users will be choosing to fly through macros-laden Excel docs, excessively large PDFs, multi-gigabyte PowerPoint presentations and several opened Edge and Chrome instances with multiple open tabs, over playing the latest AAA game.