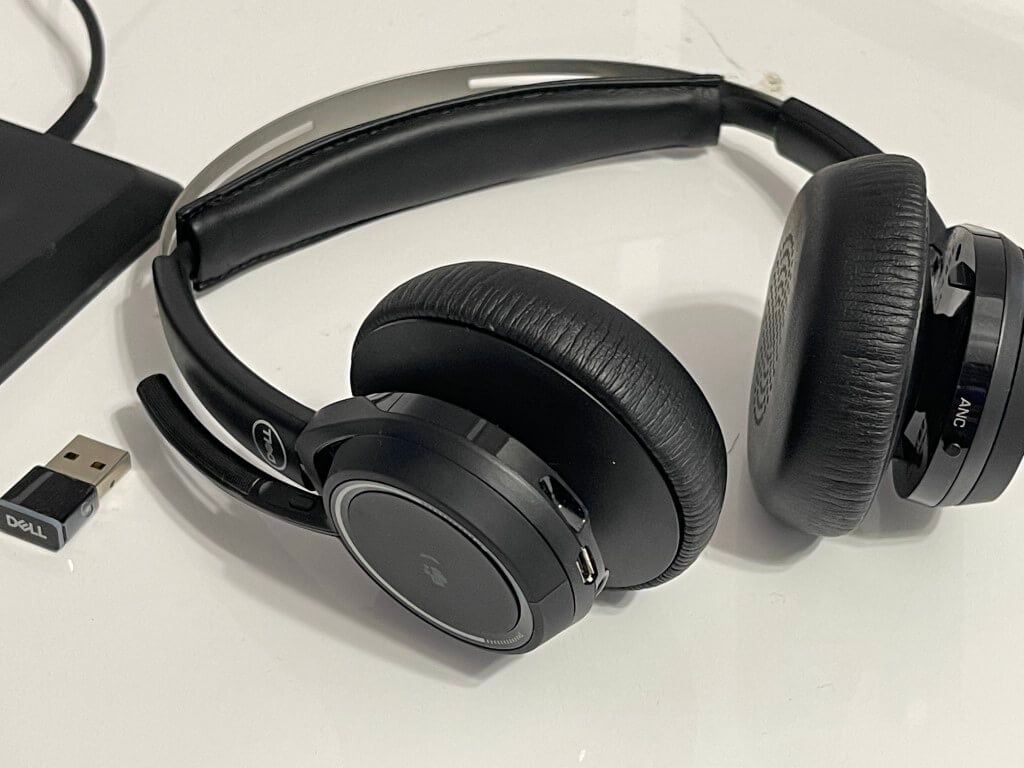 One of the benefits of Microsoft's new Surface Headphones 2+ is the Microsoft Teams certification. Since then, a lot of Microsoft's partners have begun making their own Teams certified headsets, and one of those is the Dell Premier Wireless ANC Headset WL7022. We were provided one for review, and have been using it over the past week in Teams and Skype calls. It's proven to be quite the headset, making our Teams calls sound amazing.

The Dell Premier Wireless ANC Headset WL7022 is catered for business and enterprise audiences, so it's quite an expensive venture at $300. For that price, you're getting the headset, a charging cradle, as well as a carrying case. Note that the headset also has a USB-A wireless receiver, and sports Bluetooth 4.0 technology. There's also Active Noise Cancellation on board.

The weight on the headset comes in at 5.47 ounces. For you audiophiles, the headset also sports support for the SBC, mSBC, CVSD codecs. There's also Hi-Fi stereo support, voice alerts onboard for battery, pairing, and mute status. The battery life is rated for 15 hours, thanks to the 325 mAh battery. 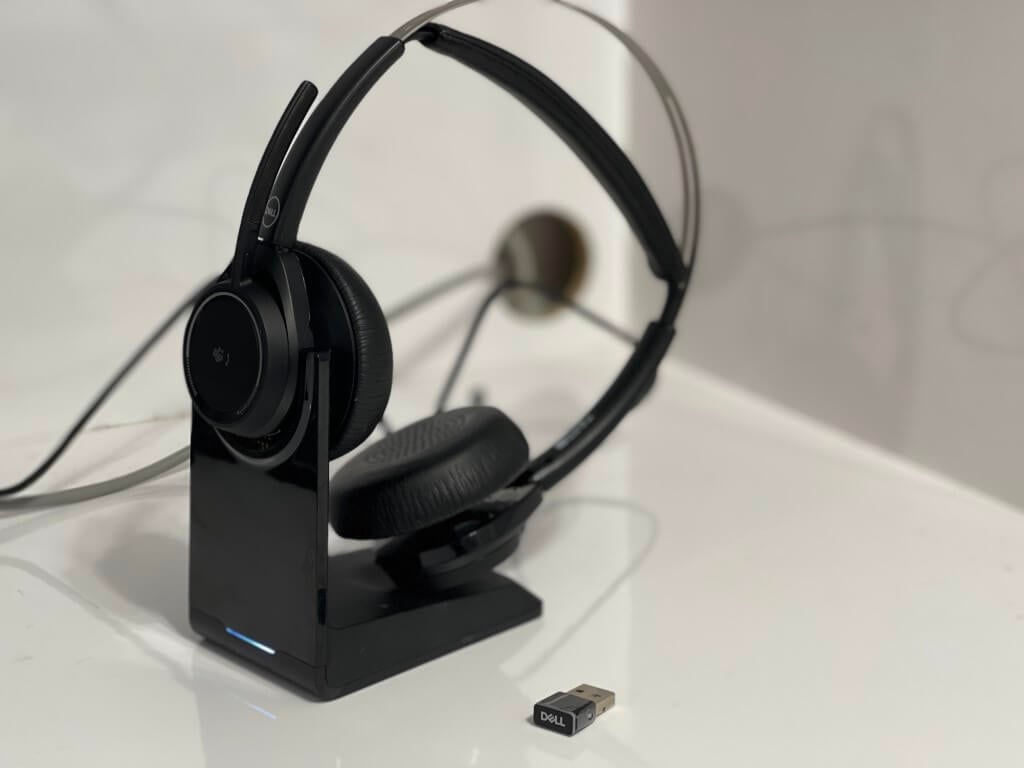 There's a lot to like with the design of this headset and it starts with the charging cradle. The headset slides into a special cradle via a POGO connector in between the right earpad and the Teams side button. When housed, the entire thing sits sleek and nice at the side of a desk. The cradle plugs in via USB-A to a monitor or charging brick, and a LED light lets you know the charging status.

It is disappointing, though, to see what happens if you opt to not use the cradle for charging, In these cases, you'll need to use micro USB. Most headsets and accessories sport USB-C on board, but this headset is an exception. For a bit of good measure, Dell includes a 3 foot long micro USB cable in the box. The included pouch also means you can travel with the headset, and the cable in a bag.

Other than the cradle, the headset itself is very slim and compact. Unlike Surface Headphones which have a big profile when sitting on the head, this Dell is a lot smaller. The earpads are comfier as it doesn't fully cover your ear and instead sits on the top. If you're wondering, Dell is using a leatherette material on the earpads as well as the headband, and the rest of the headset is plastic (other than the metal band in the middle.) That means that the headset doesn't fit too tight and leaves room for your ears to breathe a bit. As you'd expect, it is adjustable, too. Up to 10 positions, so it can fit anyone and everyone. 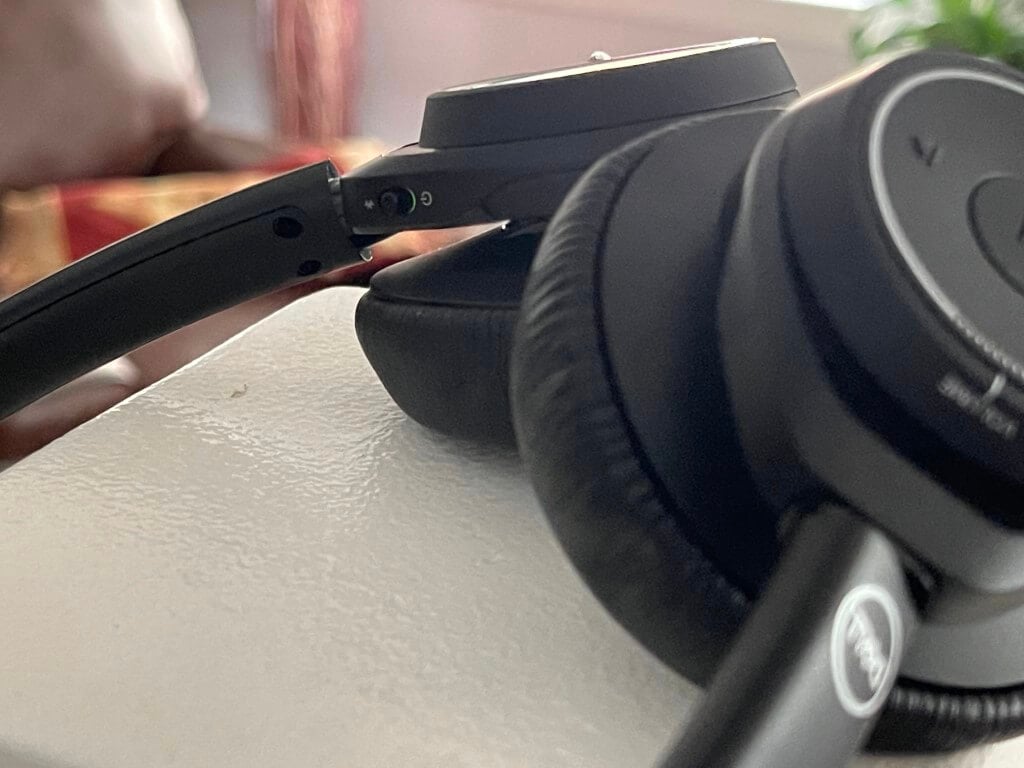 Other points of the design include the buttons on board the mic. A Teams call button on the right side lets you tap to open Teams to manage your calls. On the left, there are play and pause buttons as well as fast forward and back. You can also twist the left earpad left and right to adjust volume, The right side has a microphone boom, which you can either be worn on the left or the right, for your convenience. All of these controls are super convenient, letting you control media without needing to touch your PC or phone.

As for the power button, it's embedded on the right earpad. Just slide the button up and it turns on then hold down that slide to pair. On the other earpad, meanwhile, you'll find the ANC button. Dell includes a USB-A dongle for connections to a PC if you don't prefer to use Bluetooth. The dongle has an indicator light that flashes to show you the status of the headphones. 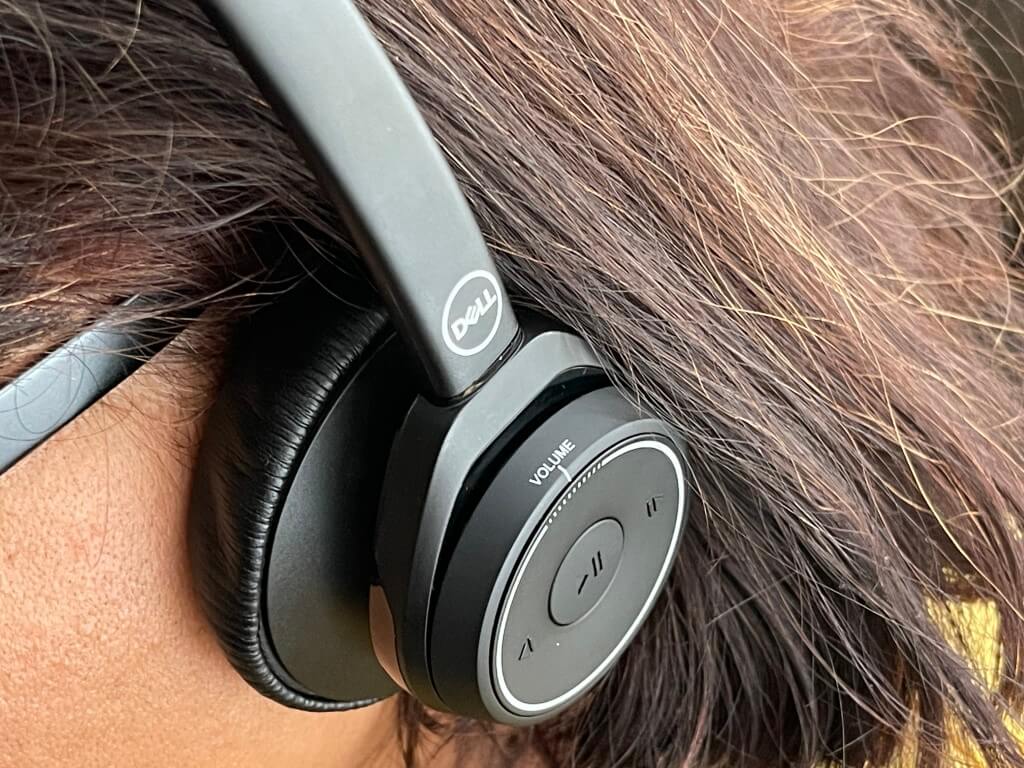 Its slim design felt at home on our head for prolonged periods of use. We started a day with it at 9:00 AM and finished our workday with it around 3:30 PM. Only taking the headset off for brief breaks, the leatherette material definitely is on the comfy side without causing our ears to sweat.

The real strength of the Dell Premier Wireless ANC Headset has to do with the way it handles voice. We tested things out on a Teams for Life (consumer version of Teams) call with one of our friends across the country. The person on the other end of the call said that we were coming through loud and clear. Even on our podcast, our guests appreciated how clear we sounded. Oh, and (with a click of a button on the inside of the mic) that microphone can also be used to listen in to your surroundings when you're wearing the headset, a bit like the transparency mode on Apple's Airpods. 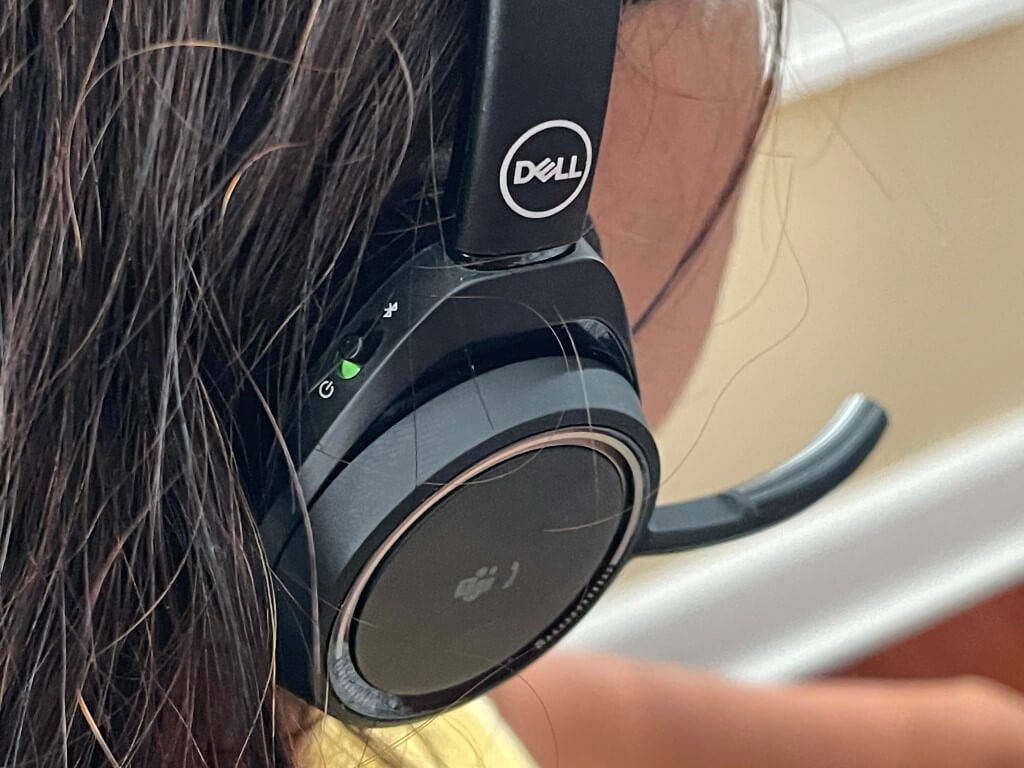 In terms of other sound quality, the Dell Premier Wireless ANC Headset WL7022 is great. When we tried out the ANC feature for watching movies at night, it was able to cancel out the sound of fireworks outside our window. Then, during Teams calls, the ANC feature muted out city noises like construction, sirens, and cars passing. ANC isn't as solid as you'd get with Surface Headphones (since it doesn't seal your ears in,) but the three mics on board this Dell headset still do a good job, all things considered.

In watching the movie Safe, the headset did a great job of making the sounds of the opening scene in the New York City Subway system feel realistic. Then, when listening to music, we couldn't help but to groove along with an EDM remix of Rather Be by Jess Glynne. The headset does a good job with decent levels of bass, and good mids but for music, it definitely is not as immersive as more studio-quality headphones with dedicated Aux cords like Microsoft's consumer Surface Headphones 2.

And what about the battery? Overall, from day-to-day use, we got through about two days on a single charge. Dell says you get up to 15 hours listen time, and 12 hours with talk time. Using the ANC kicks that down to 10 hours and 12 hours. 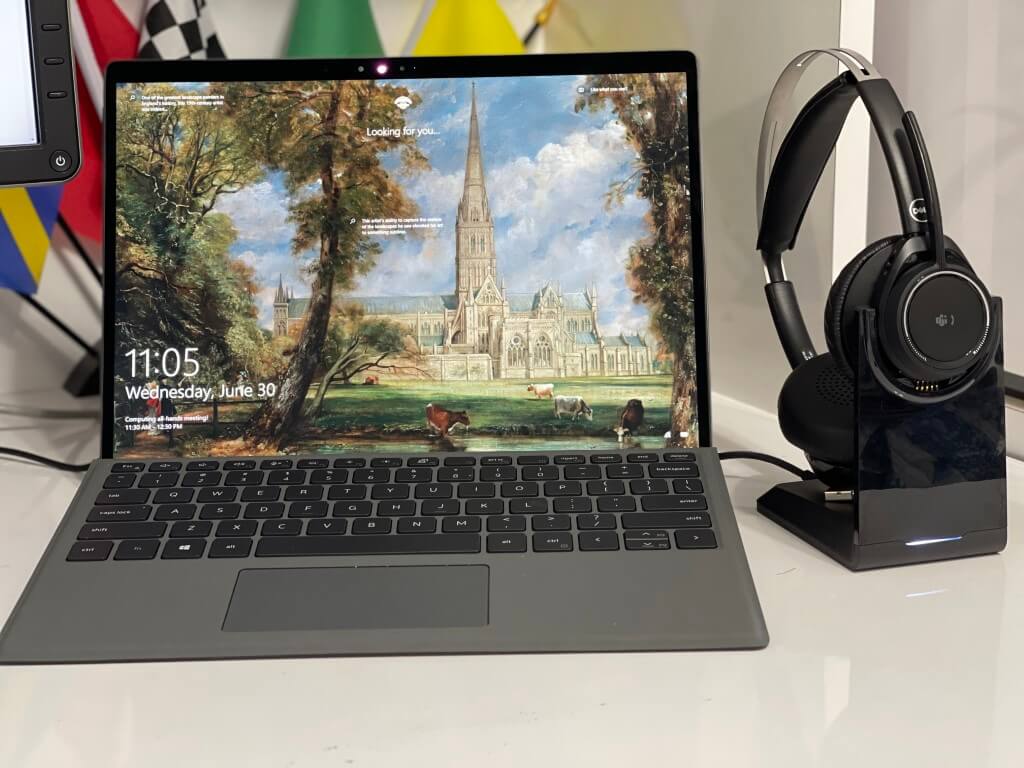 The Dell Premier Wireless ANC Headset WL7022 has a couple of smart features that we appreciate. The first of those is the smart sensors. There are smart sensors onboard that can automatically mute calls (and music) when the headset is removed. Another is hearing protection. This feature can detect loud noises and prevents audio spikes to protect hearing.

Finally, there's the way it works with different devices. We paired the headset with an iPhone via Bluetooth, as well as a PC with the USB dongle. We were able to use the headset to listen to music on an iPhone, then switch over to the PC when we needed audio there. It's seamless, and the switching happens instantly.

We end with a note on the software. To peek at the battery status of the headset and more, you can download the Plantronics Hub Software on Windows and other platforms. It also has a host of other settings for controlling the sensors, audio prompts, audio, and more. If you're into tweaking things, then we highly suggest this optional download.

Expensive, but good for enterprise

Priced at $300, the Dell Premier Wireless ANC Headset WL7022 might be out of reach for most consumers. However, for enterprise users and IT admins who send out headsets to people in the office or at home, this headset is worth it for enhancing Teams calls. The audio is immersive, there are some intuitive features, and it's very comfortable and easy to use with all your different devices. As alternatives, we would suggest the similarly priced Surface Headphones 2+. Consumers, though, might want to check out more the Dell Pro Stereo headset, or an Alienware headset.