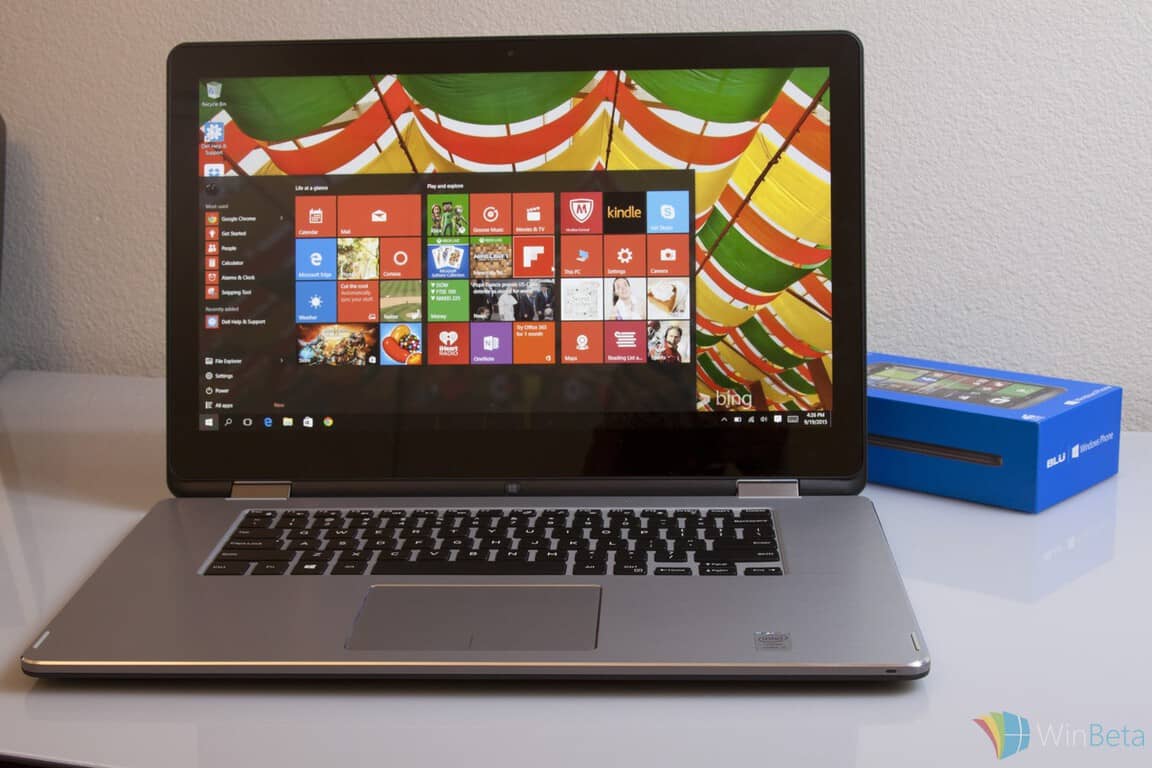 When the Dell Inspiron 15 7000 2-in-1 arrived on my doorstep, I thought to myself, "oh here we go, yet another laptop hybrid that probably costs an arm and a leg, and will probably disappoint me." Yes, I was disappointed, but not at the device. I was disappointed at myself for immediately thinking negative and not giving it a chance. Some of you may love Dell's products, while others may hate them, either way, I actually enjoyed my time with the Inspiron 15 7000 2-in-1.

Instead of the typical review that spits out benchmarks using software you probably never heard of or care about and other confusing words or comparisons, i'd like to take a different approach. I'd like to take a more real-world approach with the Inspiron 15 7000. For the purposes of this review, I used the Dell Inspiron 15 7000 for a month just to get a better idea of what this device is all about and see if it fit into my daily workaholic lifestyle.

There were times where I was on the couch relaxing, watching TV, when an idea popped into my mind. I wanted to jot some notes down in OneNote or read the latest news on WinBeta.org. I didn't want to pick up my Windows Phone, nor did I want to use my Surface, so I grabbed the Inspiron 15 7000 and placed it on my lap. It's no lightweight, coming in at close to five pounds in weight, but reassures you that it's sturdy. The hinge is quite strong on this device, so it took a bit of an effort to lift the display. Once it was up and the laptop booted into Windows 10 (quite instantaneously I might add), I tapped on the Start button and hit OneNote. Done. Now I have my notes saved. Easy process. There were times where I wanted to quickly get on the internet and look up something on IMDB while watching a movie on the TV -- I was able to do that quickly too.

The device felt comfortable to use on my lap, and that's hard for me to say about any laptop. The keyboard was a bit uncomfortable to use, but that's normal for any laptop keyboard, especially when you are so used to using the Microsoft Sculpt Comfort keyboard on the desktop. At times, I flipped the keyboard to the rear of the device (thanks to the 360-degree hinge on the device) and I was able to use the device as a tablet. I surfed through my Feedly feeds using just my finger. For those that care, there is lighting behind the keys, giving it a nice and elegant look to the keyboard and the device. The lights shut off automatically when the device is idle, and the keys light up again as soon as you start typing away.

I installed and fired up a game called Dead Rising 3 on this device and was able to play at low to medium settings with decent, playable framerates. If I wanted better performance, I probably should be playing this game on my desktop instead (I have a Titan X on my desktop rig, it's a beast!). I also played Candy Crush on the laptop using the touch screen rather than the trackpad, and it was an enjoyable experience. Felt a bit odd to play on such a larger screen and I probably would have felt comfortable playing most games from the Windows Store on my phone instead, but whatever. The point is, the laptop can play games with decent performance. After all, it has an Intel HD Graphics 5500 GPU. I fired up Spotify and listened to some music too. The audio wasn't too shabby, but nothing to brag about. You're better off plugging in some quality headphones.

I placed the Inspiron 15 7000 on my desk at the office with the idea that it could replace my desktop for an hour or two. I have to admit, it is quite hard to move away from a powerful desktop with an ultrawide monitor to a small 15.6-inch laptop with half the power. The first thing I needed to do was hook up a small Bluetooth mouse to the laptop, as I am not a big fan of trackpads.

Thankfully, the device performed well. I was able to open multiple tabs on Microsoft Edge without impacting system performance. It was hard to do any productive work on a 15-inch screen (I am spoiled with a 3 monitor desktop setup), but easily able to edit documents and surf the web without any issues.

The 15-inch 1080p display is crisp and glossy, and any content I had open on the screen looked vibrant. I am personally not a big fan of glossy screens, but I get its purpose to facilitate an awesome touch experience.

The device features the Realtek High Definition Audio controller, which works well with Cortana. I had Cortana opening up apps and doing routine tasks around the operating system with ease. There's also a decent integrated webcam for those of you who love using Skype.

It's 7AM on a clear sunny slightly-breezy Sunday morning. I have my Inspiron 15 7000 on my lap while I sit on my lounge chair, curious to see what's new in the Microsoft world (at least, what's new since the last time I logged on). In the business of news reporting, you must be up-to-speed with breaking news, no matter the time of day. Similar to my experience with the device on the couch, I was able to comfortably place the device on my lap.

This is where the glossy screen became a pain in the ass as the morning became filled with bright sunlight. It was hard to see the screen (I saw more of my reflection than the contents on the screen), even with the screen brightness on high. I ended up becoming frustrated at the experience and decided to put the laptop away. I don't like that I had to do this at all.

I found myself sitting at the kitchen table with my Inspiron 15 7000 on a number of occasions, working on an excel spreadsheet I was tweaking/improving for a co-worker. But, there were times where I searched the internet for a recipe (I wanted to cook my rib-eye steak a little bit differently this time). The Inspiron 50 7000 features a 360-degree rotating hinge that allows you to fold the display backwards to rest on the base of the laptop (this is called tablet mode). But, if you fold it back about 260-degrees, you now have the device in Stand mode. This is particularly useful when you want your device positioned on your counter like a tent so you can view the display while you cook. Aside from a few oily smudges I placed on the screen, this worked out quite well.

I was easily able to adjust screen brightness or adjust Bluetooth settings just by swiping from the right to open the Windows 10 Action Center. Connecting my Bluetooth mouse to the laptop was also a straightforward process, but I am not too excited about the way Microsoft has turned the Control Panel into an app (Settings app). Often times, I  will see that pesky, annoying loading animation for minutes while I try to pair my Bluetooth mouse. If I force close the Settings app and reopen it, I no longer see that annoying loading animation and the connection is quick.

I was able to achieve five hours of battery life, but your mileage will naturally vary. Charging the device took me one hour while turned off, but takes much longer if you keep it on while charging. Playing a game like Candy Crush for an hour, or watching the latest episode of Fear The Walking Dead, didn't really hurt the battery too much, but I decided to charge the device before going to bed just to play on the safe side.

The Inspiron 15 7000 2-in-1 is a beautiful device, with a gorgeous touch display. It packs a punch and performs well for the average consumer who simply wants to get work done and casually surf the internet. Dell has hit a homerun with this device, thanks to the balance between price and performance. Would I purchase this device for myself or for a loved one? Yes. Definitely.

So should you buy this device? My recommendation is yes and it's based on two important factors -- price and performance. The device comes in various processor configurations ranging from $550 up to $850 (Core i3 to Core i5). Definitely not a bad price for a device that packs quite a punch and looks gorgeous. You can check out the 2-in-1 on its website here.

Rock Band 4 to include U2 songs for the first time