If you missed the initial unboxing of Dell Inspiron 13 7368, check it out before diving into the full review!

Dell’s XPS 13 is widely considered to be the finest Windows laptop available since its inception, but it’s sometimes overlooked that pretty much all of Dell’s offerings have seen a serious step up in quality over the last few years. The Inspiron line has been around for a long time, but this year’s Inspiron 13 7000 series of laptops impresses. Supporting a wide range of standards, including USB Type C and Windows Hello, the Inspiron 13 manages to pack stunning amount of features into a computer that starts at $749. 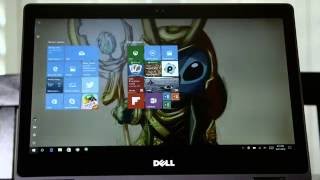 If you missed the initial unboxing of Dell Inspiron 13 7368, check it out before diving into the full review! Dell’s XPS 13 is widely considered to be the finest Windows laptop available since its inception, but it’s sometimes overlooked that pretty much all of Dell’s offerings have seen a serious s

The Inspiron 13 is a classy looking device to our eyes, finding an excellent balance between form and practicality. The enclosure is a combination of aluminum and soft touch plastic, making for a sturdy over build. The device is .74” (18.7mm) at its thinnest point and a bit on the heavier side for an ultrabook at 3.86 lbs (1.75 kg). It’s still a fairly easy device to handle regardless, but there are plenty of other units that weigh much less with a similar spec.

The display is a 13” 1080p IPS touchscreen, a good balance between pixel density and battery performance. Color contrast in particular is a bit lacking on the display, but you probably wouldn’t even realize unless you put it side by side with a higher quality display. The device has a 360-degree hinge as well, allowing you to prop the device on its keyboard or even use it as a tablet (if that’s your thing). Between the weight and the awkward aspect ratio we’d never recommend using it as a tablet for long, but the feature is useful for watching videos or playing some lightweight games with a controller.

The keyboard is one of the most comfortable we’ve used on any of the devices we’ve reviewed this year, including many of the significantly more expensive models. Key travel is satisfying and there’s a distinct ‘bounce back’ in the keys that makes fast typing easy. Backlighting is balanced, with 3 levels of brightness, and all the more common function keys are accounted for. The trackpad, like so many of Dell’s other devices, is a Precision Trackpad and supports all of the gestures and features native to Windows 10. It’s a little small considering the size of the frame, but it is accurate and reliable.

Dell again has a few surprises with the ports, being one of the more inexpensive devices we’ve seen to feature a full USB 3.0 Type-C port. The USB C port even supports DC-In, making it possible to charge the unit as long as the power adapter or battery can push enough juice. It comes with a power adapter using a standard Dell charging port, but it’s good to see Dell giving its users a choice. Also included is a USB 3.0 Type A port, a USB 2.0 A port, full-sized HDMI, combo headset jack, SD card slot and Noble Lock slot. The camera is a 720p shooter with a fair amount of noise in even well-lit areas, though it is important to note that it supports the IR features required for Windows Hello face recognition. The speakers are stereo, downward facing units that lack any semblance of low end but are loud enough to fill a small room. The speakers and camera leave few surprises aside from the support for Windows Hello, both being astoundingly adequate.

Performance on our review unit was dependable, never chugging during our time with it running day-to-day types of tasks like web browsing, email and the like. We have a unit equipped with a dual-core Core i5 6200U running at 2.3 GHz, configurable up to a Core i7 6500U, 8 GB of non-soldered DDR4 RAM, and a 256 GB SSD, configurable up to 512 GB. Light gaming is not impossible as well, sporting an Intel 520 integrated GPU, with the Inspiron 13 handling lighter games well enough and more advanced games by dropping the settings and resolution down. Don’t expect miracles, but for someone looking to play primarily years old titles or some light MOBAs the Inspiron 13 should be able to power through.

Battery life is acceptable, getting somewhere between 5.5-7 hours on normal day-to-day use. A normal day was generally some light word processing, 12-15 tabs open in Edge and a couple instant messengers. We were hoping for a bit more coming from a computer with these specifications, but there’s enough here to be able to take it out for an afternoon without being too worried it won’t last.

The system is clear of most unwanted third party bloatware and includes a few system utilities from Dell that all seem to have a purpose. Those include a driver updater, support and registration apps, an audio panel and a power manager. It’s a bit more than we care to see, but there are only a few that run at startup and they’re all easily uninstallable.

Dell’s 7000 series of the Inspiron 13 is one of our favorite computers we’ve reviewed so far this year. It doesn’t come with any big surprises or innovations and it will disappoint people looking for more graphics performance, but it includes a huge number of genuinely useful features for a computer that can be bought for under $750. For the price, you get a 1080p touchscreen with a 360-degree hinge, a full voltage CPU, a USB-C port that supports charging, upgradeable RAM, a forward facing camera with support for Windows Hello, and a Precision Trackpad. Several of these features are barely a year old and it’s amazing to see Dell fit so much potential into a computer priced so reasonably. This is a computer that would still be excellent if the price was several hundred dollars more, and if you search for it on the internet, it’s even pretty easy to find it on sale. If you’re looking to upgrade your PC, the Inspiron 13 deserves your attention.