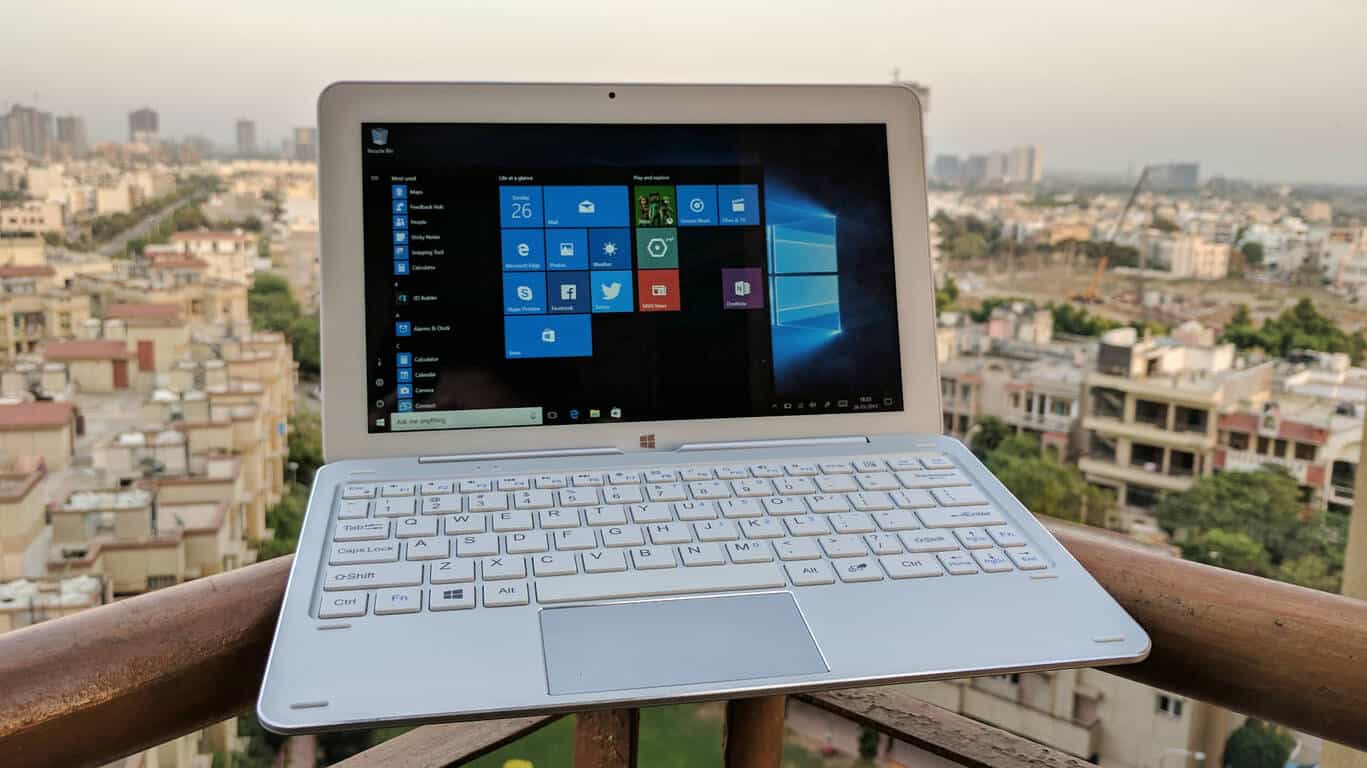 Cube Mix Plus is the latest Windows 10 2-in-1 from a little known Chinese OEM – Shenzhen Alldo Cube. The company is quite popular on Chinese online retailers, but unlike Chuwi, hasn’t made a mark outside the country as yet.

I ordered the Cube Mix Plus from GearBest.com and these are my thoughts on using it for a couple of weeks – both as a tablet as well as a laptop, along with the inking experience.

The Cube Mix Plus sports a white chassis in a silver frame. It’s a pleasing color combination and overall the tablet and the keyboard look slick. The corners are rounded and the edges are chamfered for a nice first impression, and the ergonomics of the tablet is quite good as well.

However, the large bezels around the display look dated. I know it’s a budget tablet, but a heavy tablet (it’s 700 grams without the keyboard dock and over 1.3kgs with it) with large bezels looks out of sorts in 2017. The company though has focused on offering performance on a budget than making it thinner and lighter to compromise on performance. More on that later.

Once you attach the keyboard, it looks like a solid Windows laptop – and that extra weight gives it more balance so it doesn’t wobble and the two parts don’t look flimsy when in use. The build quality is excellent and the buttons on the edges look like they could take some rough use.

Cube hasn’t yet got mainstream globally, and the company continues to go with Chinese branding on its devices which is a little awkward, however, it’s not a showstopper.

Cube Mix Plus offers a fantastic display for a tablet it in this price range. It’s a Full HD panel in aspect 16:9 ratio that offers nice color reproduction and a decent saturation. It’s not exceptionally bright or vivid, but the contrast is pretty good and the viewing angles are great.

Of course, the highlight of the Cube Mix Plus is the digitizer layer with 1024 pressure levels that offers stylus support using the Wacom EMR (electro-magnetic resonance) technology. It was nice that the device was calibrated just fine out of the box with excellent edge accuracy. The Wacom drivers are pre-installed too.

Powered by the latest generation Intel Core M3-7Y30 Kaby Lake processor, the Cube Mix Plus is a performance workhorse. The seventh-generation processor is a nice departure from Intel Atom processors that one finds on most budget laptops and tablets. The SoC is paired with Intel HD Graphics 615 GPU and boasts of 4GB of RAM and 128GB of SSD. The SSD provides faster data transfer than eMMC storage found on most similar tablets.

Overall, all the innards work in cohesion to offer surprisingly terrific performance. From startup time to multitasking to benchmarks, the Cube Mix Plus impresses, and dare I say, performs better than a Surface Pro 4 with Core M processor (which is a generation old in terms of hardware). While web browsing and usual productivity apps are a breeze, playing graphic-intensive games and running apps like Adobe Photoshop is all okay too for a casual user.

The Cube Mix Plus sports a fan-less design, and is absolutely silent, although it does gets hot, and that too, not uniformly. The left side of the tablet gets quite warm when you’re stretching it but it doesn’t get uncomfortable to hold.

The device packs in a 4300mAh battery and you can get a battery life of about 6 hours. It’s not extraordinary, but suffices for most users. The Core M3 is a power-hungry processor and battery-life is the trade-off for the performance goodness. Unfortunately, the Cube Mix Plus doesn’t use USB Type-C for charging which is very handy on a few other budget tablets I’ve tried in recent times. In this case, I have to carry a separate charger else I could use the same one as my phone.

While the keyboard includes two full-sized USB ports, the tablet only sports USB Type-C and microUSB 3.0 ports. However, the company does include an OTG cable in the box in case you want to attach a USB peripheral or quickly transfer some data from a pen drive if you’re using just the tablet.

The Cube Mix Plus runs clean Windows 10 Home with no pre-installed apps. Out of the box, there’s a Cube user account already set up. Like I always do, I did a reset to start from scratch and signed in with my Microsoft account. I recommend you do that as well.

The tablet packs in Windows 10 version 1607 which includes the Windows Ink enhancements that were introduced in the Anniversary Update. Since inking is a highlight of this device, it is nice to have that going out of the box.

Available as a separate purchase, the Cube CDK09 keyboard converts the Cube Mix Plus tablet into a full-blown laptop. The keyboard also includes two full-sized USB ports. The tablet can be docked on the keyboard in either direction to offer both the laptop mode as well as the presentation mode.

The full-featured keyboard is fantastic and nicely done. It offers nice travel while typing and the trackpad is decent enough too. If you’re not used to small keyboards, you might take a while to adjust to the cramped interface, but it’s very functional and one of the better ones out there.

The highlight of Cube Mix Plus is inking support which has also gained prominence amongst developers and users alike with Microsoft’s efforts in the direction. The tablet offers excellent palm rejection, and therefore, the inking experience is very seamless and natural.

The Wacom stylus doesn’t require battery, which is useful and works quite well. It sports a button on the side which can be configured for any operation (I use it to fire the Windows Ink Workspace) and an eraser tip on the butt.

You can buy the tablet here and the keyboard here, and at less than $400, the Cube Mix Plus is one of the cheapest devices with Intel Core M3 Kaby Lake processor.

With a solid chassis and powerful internals, you can’t go wrong with it if you’re looking for a portable Windows 2-in-1 or just a performance-oriented tablet. If you just need a decent Windows tablet for web browsing and media consumption, you’re better off with cheaper alternatives out there.