Alienware is a brand that’s synonymous with trying out all kinds of cool things for gamers to enjoy. 2019’s Alienware AW3420DW monitor was the perfect example of how. Back in 2019, it was one of the best monitors to buy. Now, three years later, a proper sequel is finally here.

Enter the Alienware 34 Curved QD-OLED Gaming Monitor, which was sent to us by Dell for review. This product once again tries to set a new standard as the world’s first quantum-dot OLED gaming monitor. After trying out for a week ahead of release, it’s safe to say that this is a gaming monitor that’ll make your games look life-like, & feel truly immersive.

The Alienware 34 QD-OLED Gaming Display is now up for sale and is priced at $1,300. You might think that the price is high, but for the specs, there’s a lot of bang in it for the money, especially when compared to a $3,000 competing OLED monitor from LG, or a $1,500 Quantum Dot monitor from Samsung. It’s really the best of both worlds with this one.

As the name suggests, this is a 34-inch curved display (1800R curvature.) It has an aspect ratio of 21:9, a viewable display size of 34.18 inches, and sports Quantum Dot OLED technology. Note that the panel also has an anti-reflective coating and OLED backlight. The display refresh rates depend on which cable you use. Opting for DisplayPort (as we tested,) you’ll get 3440 x 1440 at 175Hz but with HDMI you’ll get 3440 x 1440 at 100Hz. Nvidia G-Sync Ultimate is also supported. 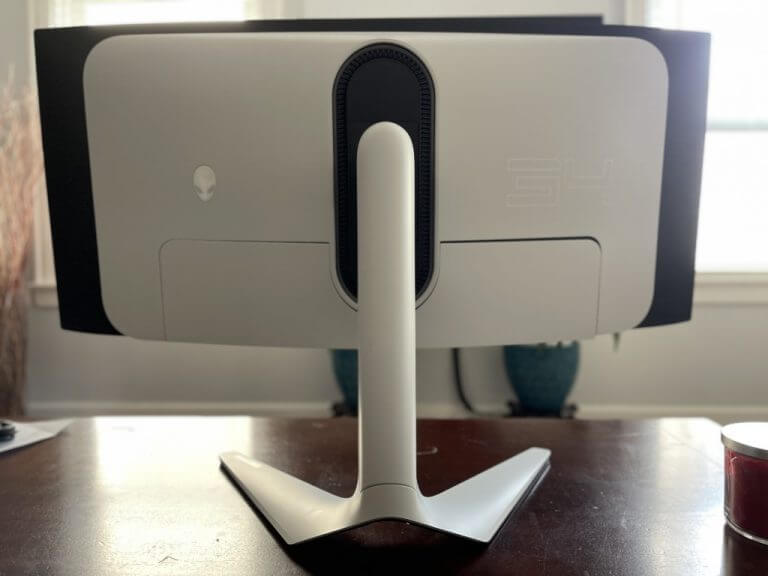 If you’ve ever used an Alienware product, then you know the deal here. The new Legend 2.0 design brings together geometric beauty and a clean simplistic look. You’ll notice that as soon as you take the monitor out of the box for setup. The middle rear portion of the display is colored in Lunar White, and so is the base up in the front. The left and right sides of the rear of the monitor are pure black, where the display panel extends its reach out. This is a new design over 2019’s Alienware AW33420DW which was pure white.

This is a welcome color choice, not overly distracting so it fits well with any setup. In particular, I especially liked how sleek the stand looks, as even though this is a massive 34-inch display, the stand is quite slim, leaving plenty of room below it on the desk. This fits well with the overall profile of the actual display panel itself, which sports super slim bezels. When I measured, is just as thick as what you get when you stack two quarters stacked on top of each other. 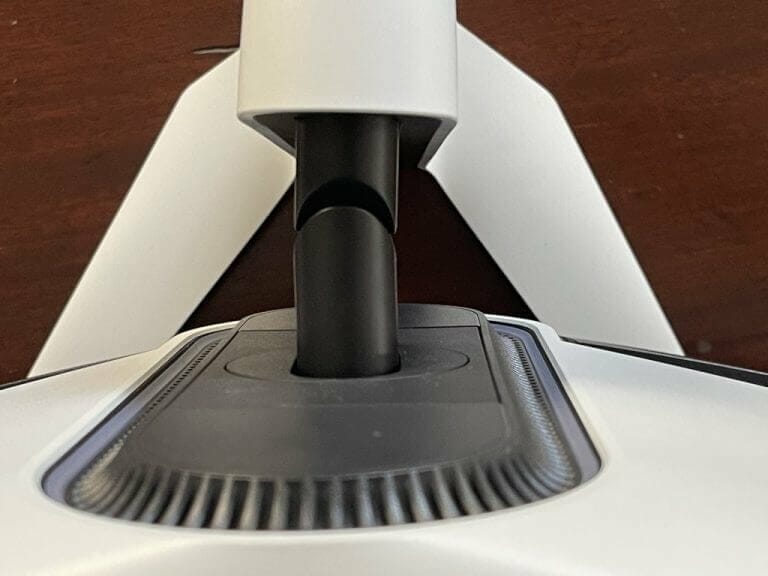 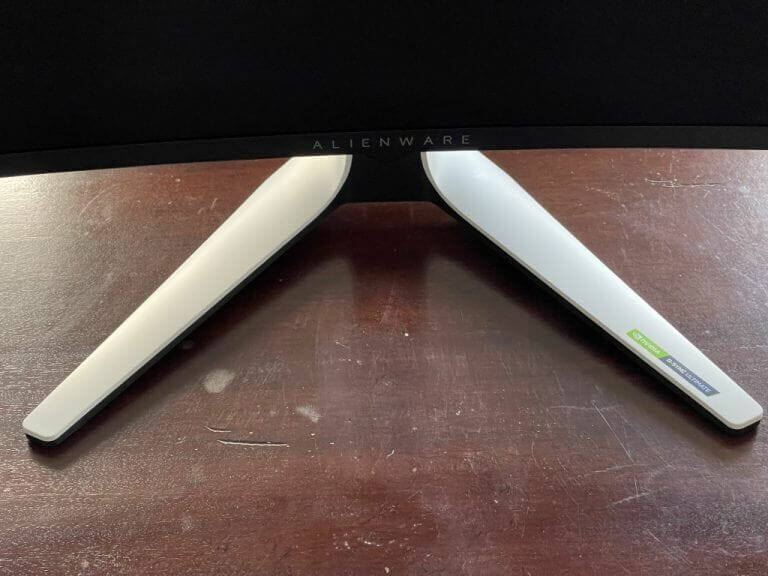 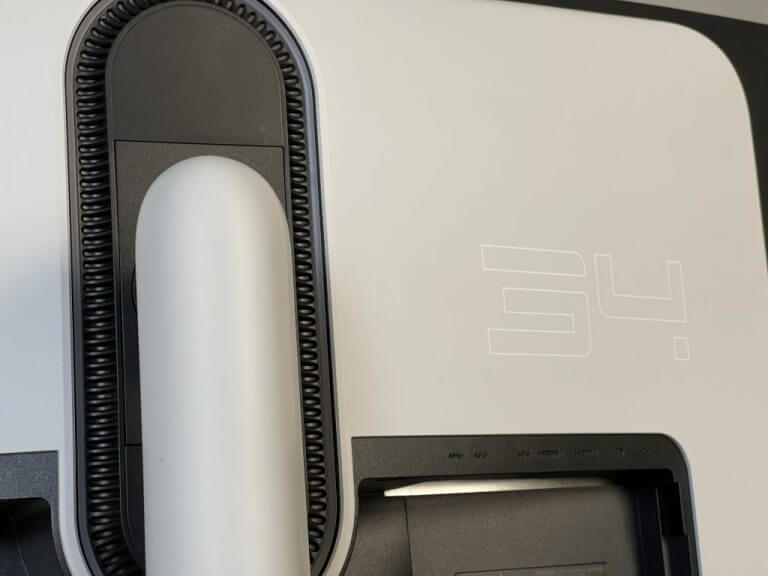 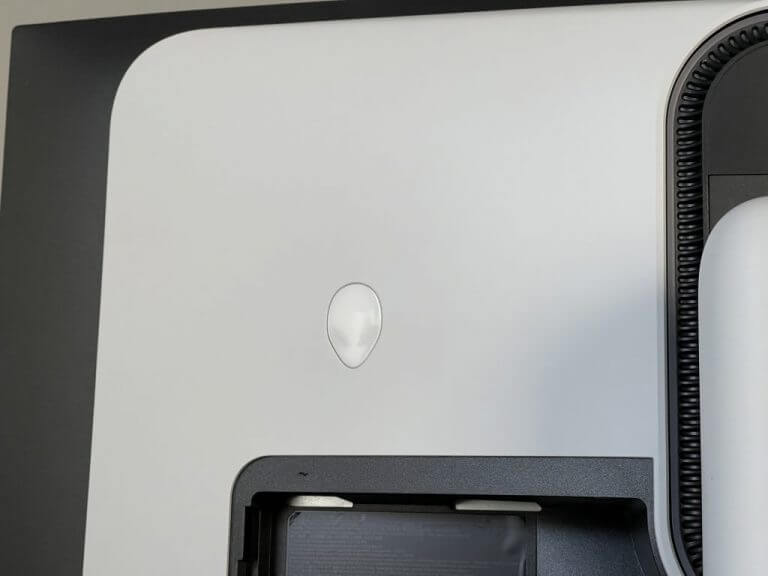 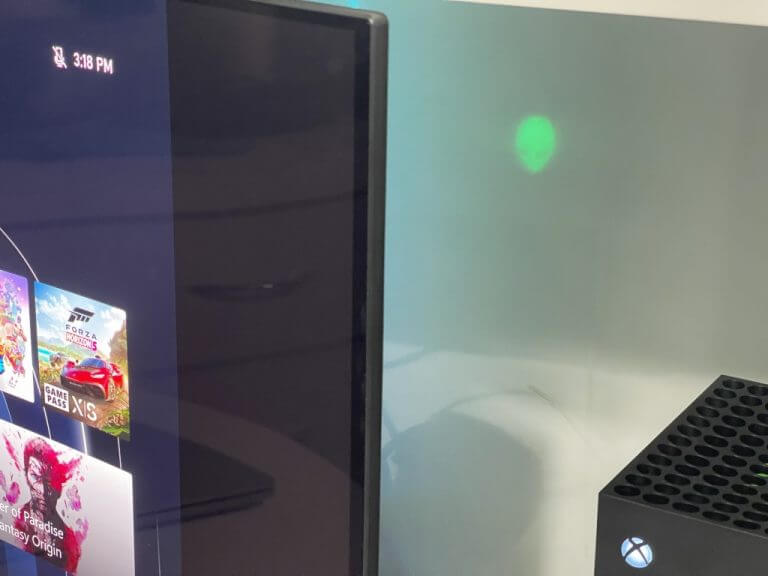 As far as actually fitting to your setup, Alienware has you covered. There’s a height-adjustable stand, with height markers so you can tilt, swivel, and slant the monitor. The tilt goes from -5 to 21 degrees, and the height can go up to 110 mm.  But that’s not all. If you look closer to the rear, you’ll see that Alienware has a pop-out cover, to help you hide your cables and ports. It keeps things sleek and slim.

Also on the rear are black-colored 360-degree vents. The vents run along the middle in a paperclip-like shape where the stand connects, allowing for heat dissipation. Of course, it also has seamless integration with AlienFX lighting. In my week with the monitor, I did hear a lot of fan noise coming from these vents, but it’s expected as a lot is going on under the hood to pump out all those pixels and colors. 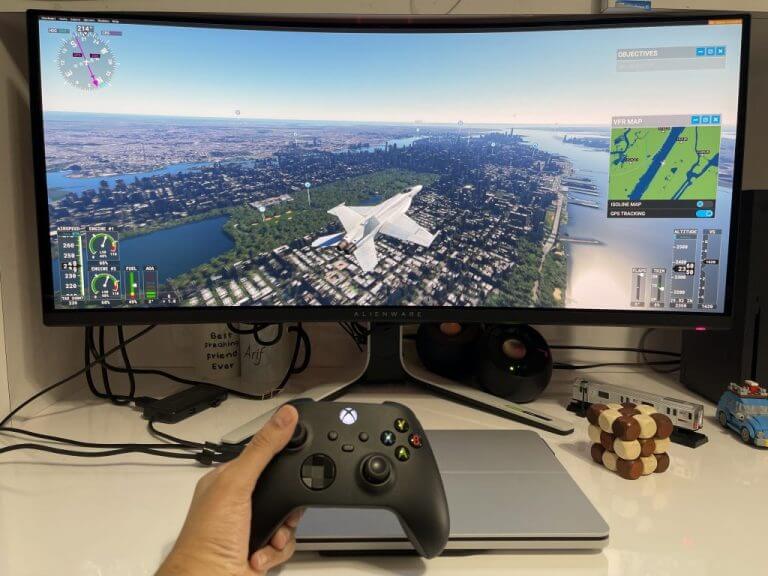 The Alienware 34 Curved QD-OLED Gaming Monitor is the world’s first quantum-dot OLED gaming monitor. But you might be wondering, what does that mean? Well, after using it for a week, and coming from using LCD monitors, I’ll tell you this. It means for highly accurate colors, life-like gaming, and really immersive multimedia experiences.

Quantum Dot Display Technology works like this. It takes the qualities of OLED, like true black and a deeper contrast ratio, and enhances the color performance by converting blue light into the primary colors of red and green through a Quantum Dot pixel layer. The result is high color uniformity and wider colors and increased brightness. You can see this in the factory reports below, taken straight out of the box. 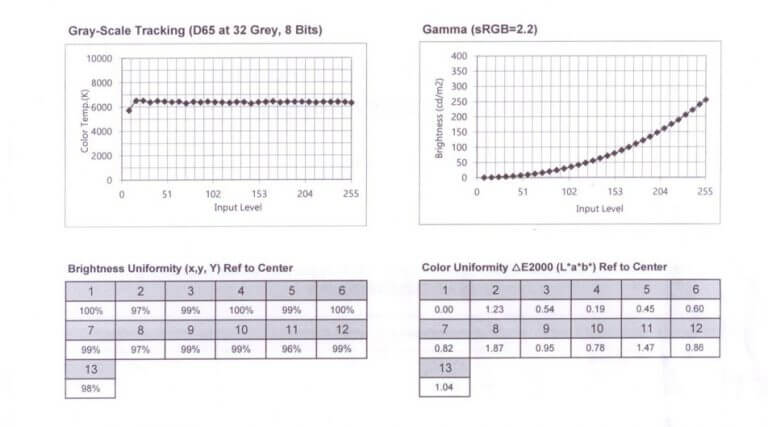 That’s what it is on paper, but in my tests, I did a couple of different things to test it out. First up with flying the skies in Microsoft Flight Simulator 2020. In this simulator which is known to push hardware to its limits, I could see how the Nvidia G-Sync kicked in, as well as the 175Hz refresh rates, as well as the ultra-wide 3440 x 1440 resolution.

The quantum dot OLED panel meant that noticed every single instrument movement on the dashboard of a fighter jet when flying the skies over Manhattan. And, when switching to an external view, the reflection of the sun over the Hudson River when flying just north of Manhattan bounced off the side of the airplane in beautiful fashion. The ultra-wide resolution also means that I could have seen more of the world under my plane in the sky. It doesn’t get any better, as the tech on the monitor makes everything in Flight Simulator more lifelike, compared to the duller colors when playing on an LCD monitor. 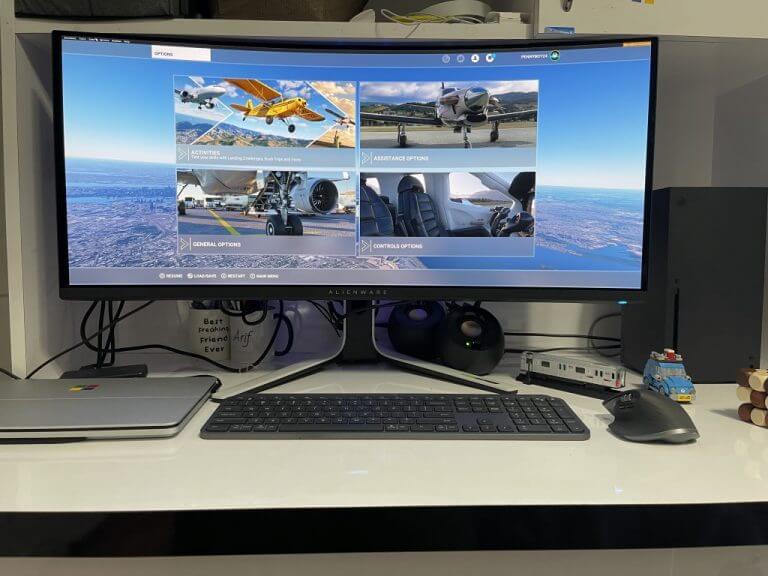 In other games like Fortnite and Project Cars 2, which are more fast-paced than Flight Simulator, things performed just as well. I was never good at Fortnite, but the color accuracy of the monitor brought out extra attention to detail in the game. Even picking up a sniper rifle, staring down the scope, and shooting at a player from a distance was enjoyable in Fortnite. There wasn’t the usual lag or screen tear coming from using my standard LCD Dell monitor.

My second test is the usual multimedia and productivity test. For multimedia, I pulled up a YouTube video showcasing the world in HDR. In looking at beaches, scenes with water, and sand, I could not help but notice fine details, like ripples in the puddles, or the tiny pebbles in the sand. Even the aqua-colored waters looked vibrant.

As for productivity, I was able to stack three Microsoft Edge windows side by side and get a fuller view of the web. Windows 11 also came to life, with animations looking smooth and fast. Even scrolling through Twitter and Teams chats was butter smooth. Trust me when I say it, once you go past 120Hz refresh rates, it’s hard to go back, and this monitor was perfect for work, too.

If you’re worried about the performance of the monitor, and possible OLED burn-in issues, then don’t panic. Dell is backing the Alienware 34 Curved QD-OLED with a 3-year service coverage so that if a replacement becomes necessary, it’ll be shipped to you the next business day. Dell’s Comfort View Plus also means you can game longer, thanks to always-on built-in low-blue light screen technology that reduces blue light emissions without impacting color accuracy. 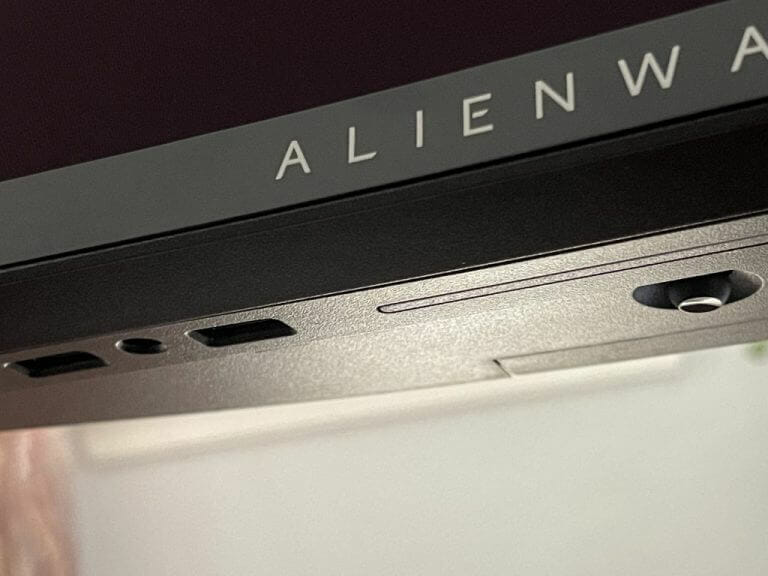 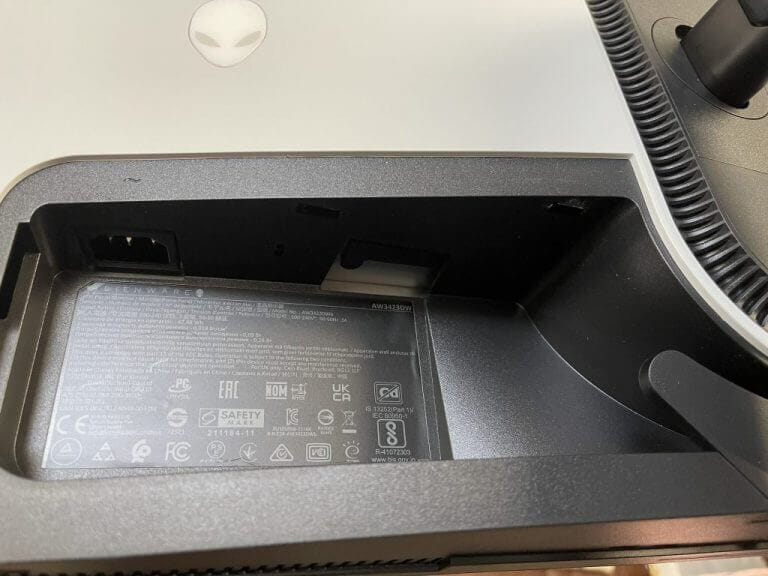 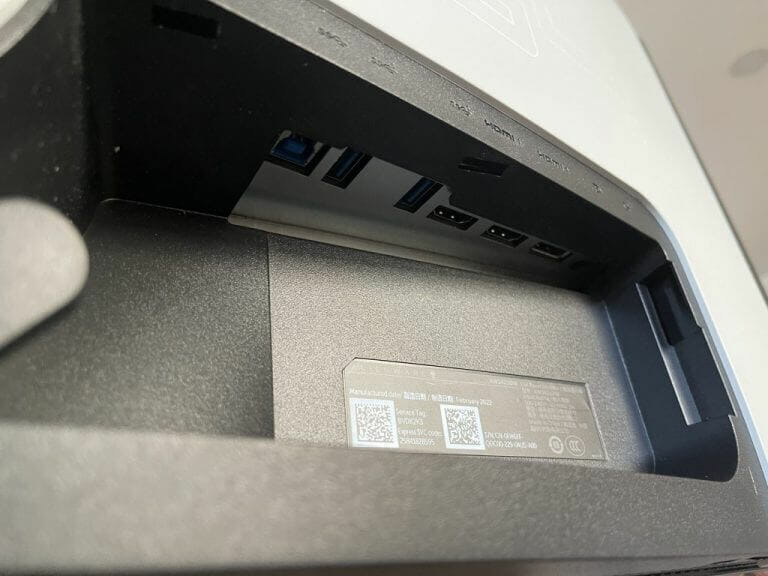 Elsewhere, left from right, you’ll find a SuperSpeed USB 3.2 Gen 1 Type-A upstream port, two SuperSpeed USB 3.2 Gen 1 Type-A downstream ports. There are then two HDMI ports, a DisplayPort 1.4, and a Line-out port. Note that these HDMI ports are HDMI 2.0 ports. Alienware suggests Display Port for the best performance of the monitor since it supports for 175Hz at the WQHD resolution. Alienware also says the panel is Nvidia G-Sync Ultimate certified, so this means Nvidia scalers won’t support HDMI 2.1.

If you opt to use this monitor with Xbox Series X, Xbox Series S, or a PlayStation, you’ll run into restrictions. You can use the HDMI 2.0 port on this monitor with the consoles, but there’s a catch. The consoles only support the 16:9 aspect ratio and 120Hz. This means QHD (2650 x 1440) is the only resolution that can be supported on Xbox on PlayStation. I found it slightly annoying, as I got black boxes at the side of the display when I connected my gaming consoles. See the image below as an example. 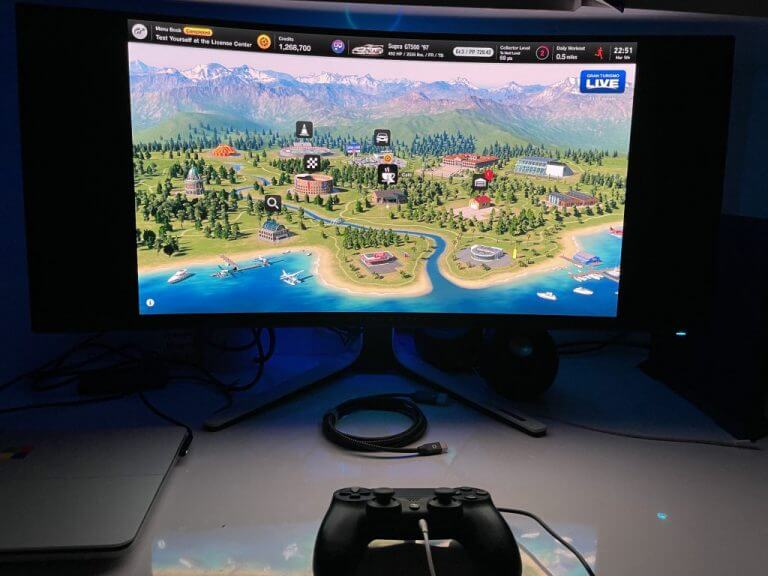 Again, it’s a limit by the console and not the monitor, so you’ll want to keep it in mind. There won’t be HDR on Xbox, either, as this is only supported on 4K on the console. Alienware suggests choosing the 24 bits per pixel video fidelity option with the Xbox Series X. This is more of a monitor for gaming PCs than it is for consoles which is why you don’t see the 4K resolution or features like built-in speakers. 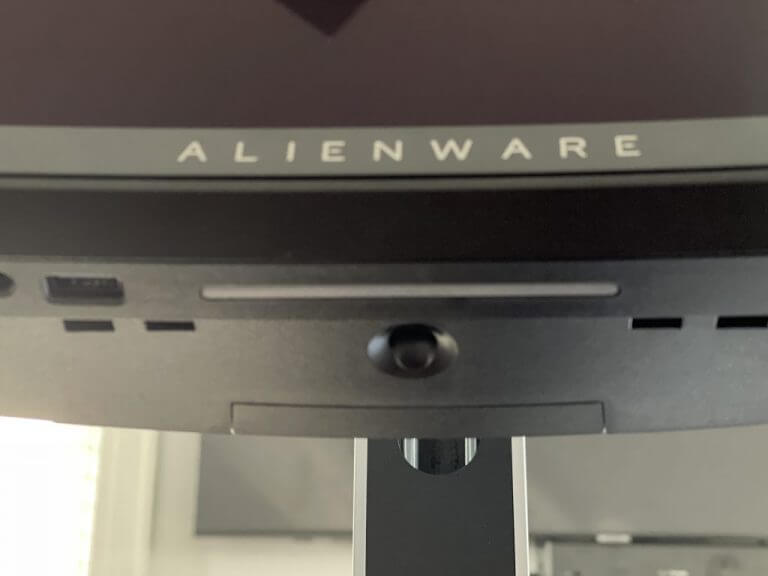 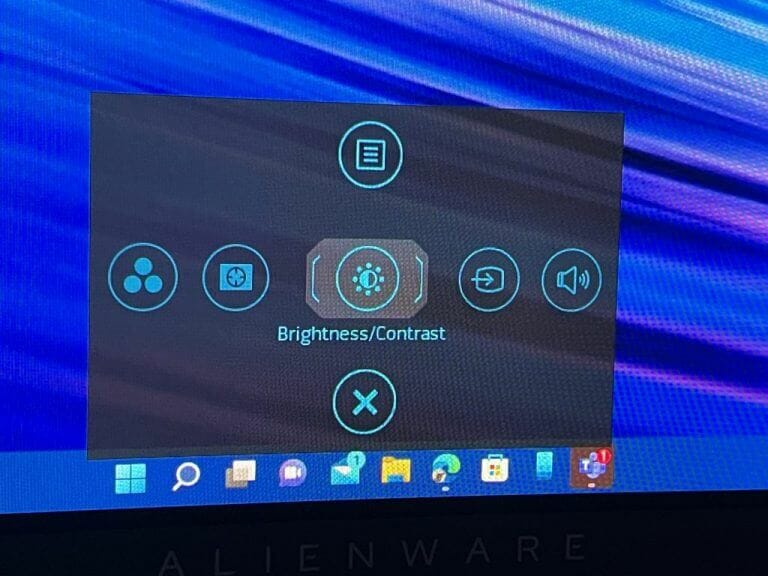 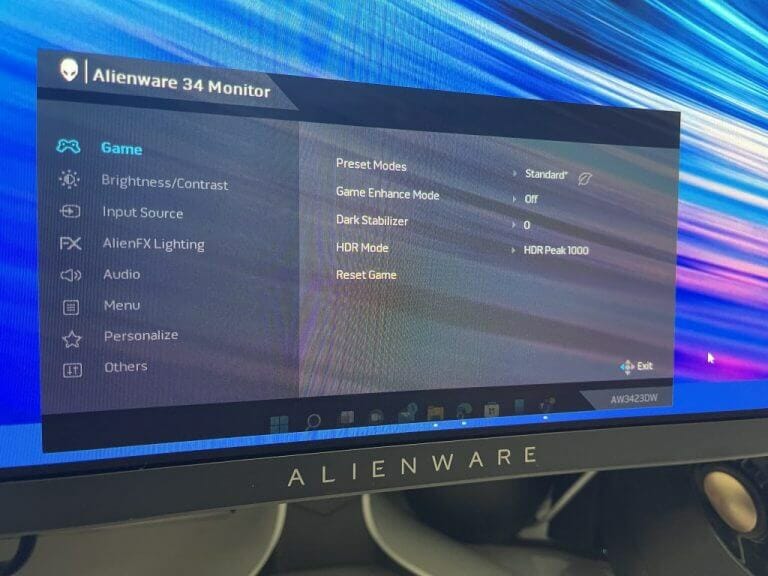 2019’s Alienware AW3420DW sported buttons and a joystick at the rear of the monitor, but this year’s AW3423DW ditches all buttons for a joystick instead. The joystick is in the center of the display on the bottom, right within reach. A single touch brings up the OSD menu, which is simple, as always. Moving left and right from that one touch gets you to brightness, contrast, volume, preset modes, dark stabilizer, options. Moving up gives you deeper options for game setting, brightness, input sources, AlienFX, personalization, and more.

There’s a total of six different OSD modes. These include creator, FPS, MOBA/RTS, RPG, Sports. You also can customize three other modes, if you see fit. Alienware promises that the Creator Mode is best for content creators and game developers who need the best color accuracy. The OSD menu also lets you switch between native DCI-P3, or sRGB, and even change the gamma settings. For productivity, I spent most of my time with the monitor in the standard mode, tweaked to HDR Peak 1000 for better brightness. 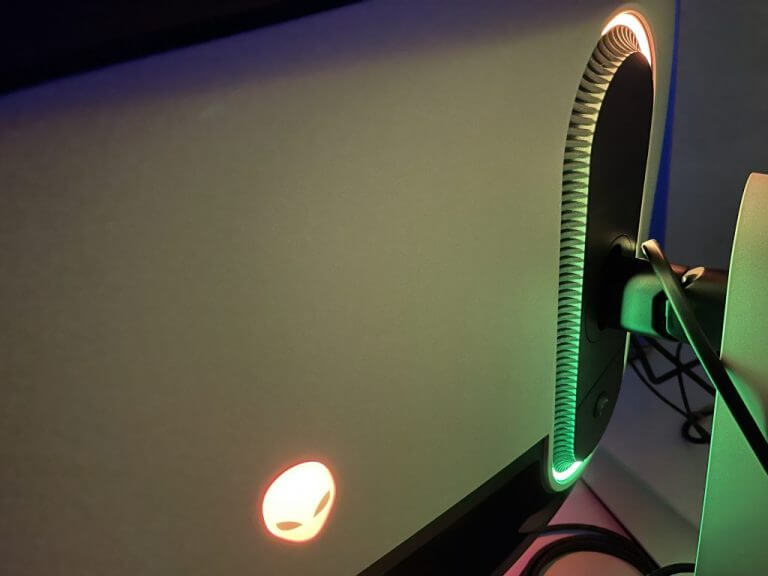 With AlienFX Lighting, you have some fun controls over it to control how your monitor looks at night. This is thanks to the OSD menus. Five clicks of the joystick in the middle of the monitor gets you to the lighting menus, and you can tweak the RGB lighting as you see fit. There’s a total of four zones of lights, including the Alienware logo, the power button, the ring on the vents, and the downlights. Each zone has 17 colors you can choose from, or three effects. The pre-set effects include Spectrum, Comet, or Rainbow Cycle. When I used the lighting effects at night, my desk was lit up in an amazing glow of colors. It’s really cool to see, and I’m sure serious gamers will enjoy this.

If you’re considering the Alienware 34 Curved QD-OLED Gaming Monitor, then it is a must-buy. QD-OLED technology is unlike any other in the market right now, and, in this case, will be much cheaper than a $3,000 competing OLED monitor from LG, or a $1,500 Quantum Dot monitor from Samsung. Buying this monitor means your games will look and feel different, and it’s hard to not pass it up.