Acer Swift X Review: The edge of Ultrabook gaming with caveats - OnMSFT.com Skip to content
We're hedging our bets! You can now follow OnMSFT.com on Mastadon or Tumblr! 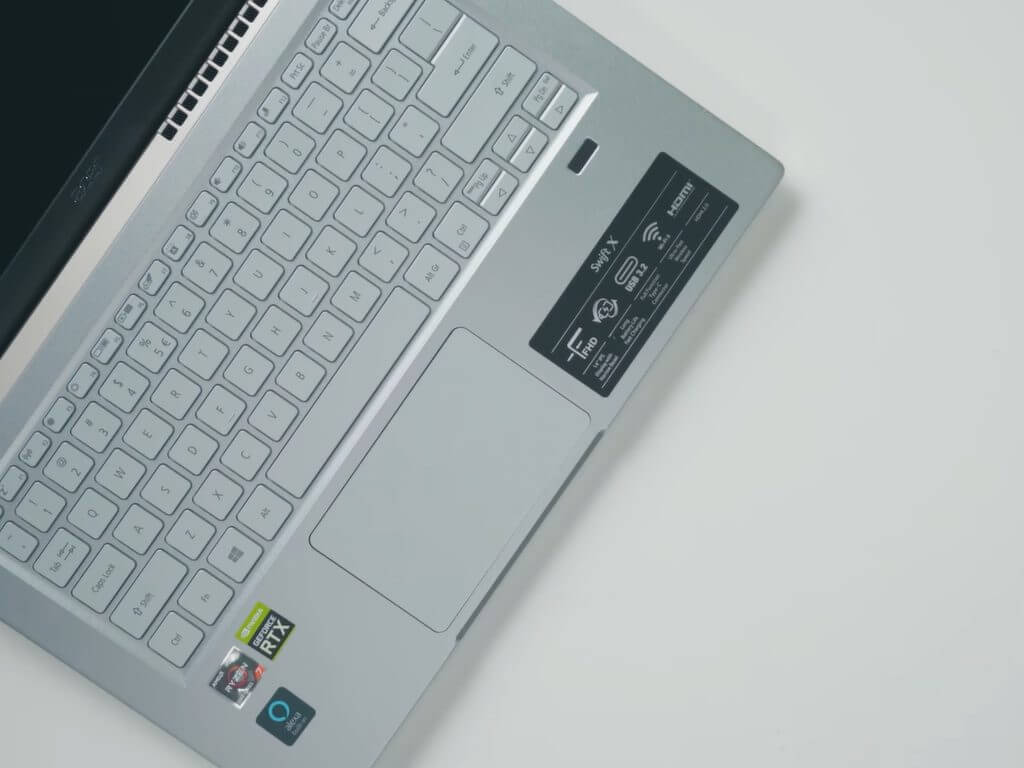 The Acer Swift X is an evolution of the company's Swift 3 laptop with a dedicated GPU and consumer friendly price point.

As far as hardware is concerned, the seemingly only flair users can immediately point to might be the Swift cover doubling as angled hinge to help adjust the laptop on flat surfaces for additional venting. The Swift X is a down-the-line laptop with enough modern engineering that it looks and feels a step above most ThinkPad's but isn't being bought as a personalized device but rather a moderately powerful compute box.

While design is usually subjective, the Swift X is arguably one of the blandest designed laptops being sold in 2022. However, competition is so stiff for evolving design language from OEMs this year that even old Swift 3 design language is still nice enough to use without shame-covering in laptop stickers skins.

The Swift X is offered in Steel Gray, Mint Green, and Melon Pink, but I've yet to come across the pink and green options on sale. The model I reviewed came in the Steel Gray color which was a two-tone color scheme that posited an aluminum grey bottom with the darker gray lid and looks to be the same arrangement for other lighter options. 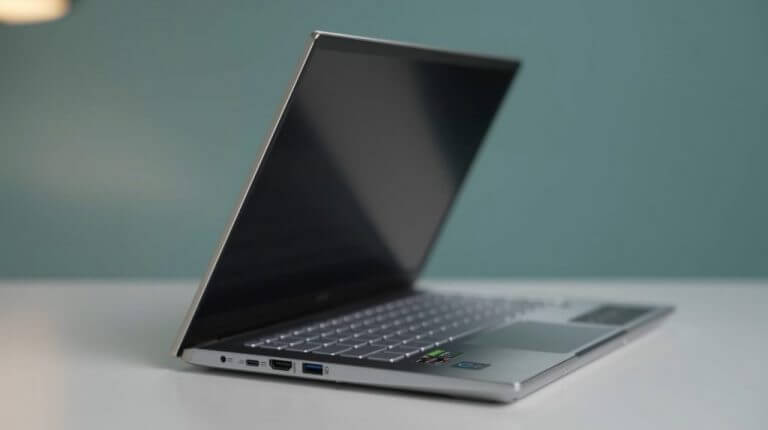 At 1.39kg or just around 3.06lbs, it's a relatively light machine that packs a 14-inch Full HD display with 300-nits of brightness with a toggle for sRGB color range, but a lot of the screen greatness is held back by the 85.73% screen-to-body ratio that hosts some rather thick bezels around the display. I'm not sure why in 2022 Acer feels compelled to add its logo in the chin of the display bezel that eats into usable screen real estate on a screen that's also hampered by its old-ish 16:9 aspect ratio.

On the sides of the laptop, users can make use of the 2 USB 3.2 Type-C ports that support 10Gbps data transfer, a display powering USB-C port, 2 USB 3.2 Gen 1 ports and a full HDMI port.

Other connectivity options for the Swift X include Dual-band Wi-Fi 6 and Bluetooth 5.2.

As for the quality-of-life improvements presented in the Swift X, users might feel a little let down by the audio profile despite support for DTS Audio and Acer's own homegrown TrueHarmony technology. While there are dual front-facing speakers present, the sound coming from them is tinny and about par for inexpensive Ultrabook's. 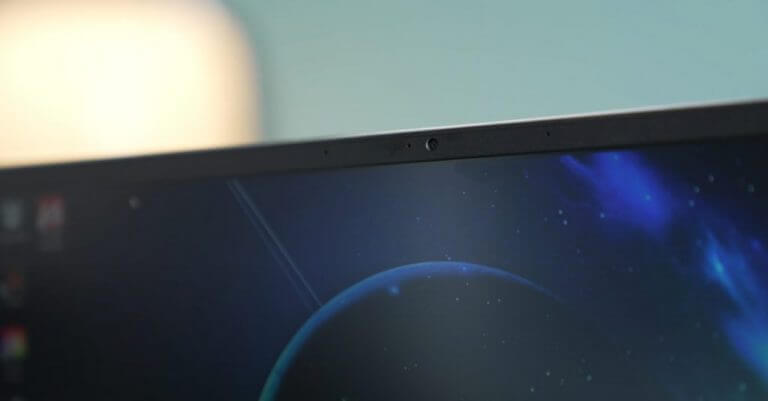 Another notable design ding for me was the whole of the keyboard deck. From the mylar plastic trackpad to the mushy key feel, it took me some time to get used to Acer's design. Page Up and Page Down buttons have been shrunk and buried towards the bottom arrow keys which resulted in quite a few accidental page jumps when typing, for me.

On the upside, the backlight keyboard is really bright and the text font used by Acer allows the light to really shine through the letters on the keys. 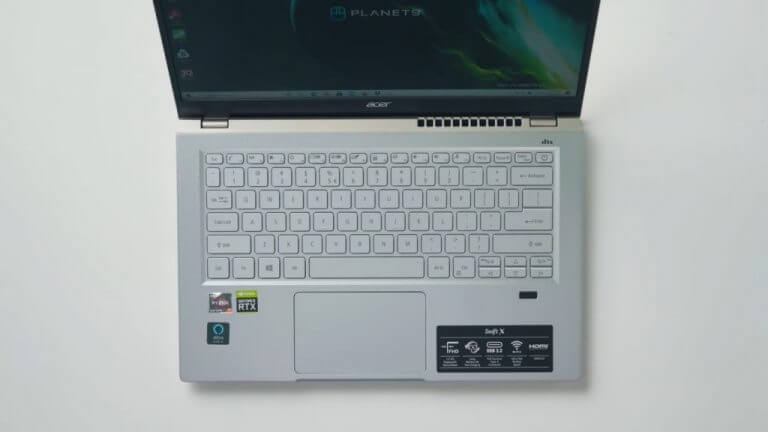 First and foremost, when measuring the performance of the Swift X, users will have to take note of the battery consumed when running synthetic benchmarks, gaming or content creation, and the battery is stellar.

Perhaps, in lieu of a glossy 4K, OLED, high refresh or variable rate panel, the matte display on the Swift X helps preserve battery and pushes the laptop over six hours of continuous use and close to ten hours when using Acers low brightness testing parameters.

When comparing the Swift X to other laptops in its price and performance category such as its own Swift 3X brethren, HP EliteBook 840 Aero G8 or a Dell Latitude 7420, Acer's latest does fairly well across a broad range of synthetic benchmarks. 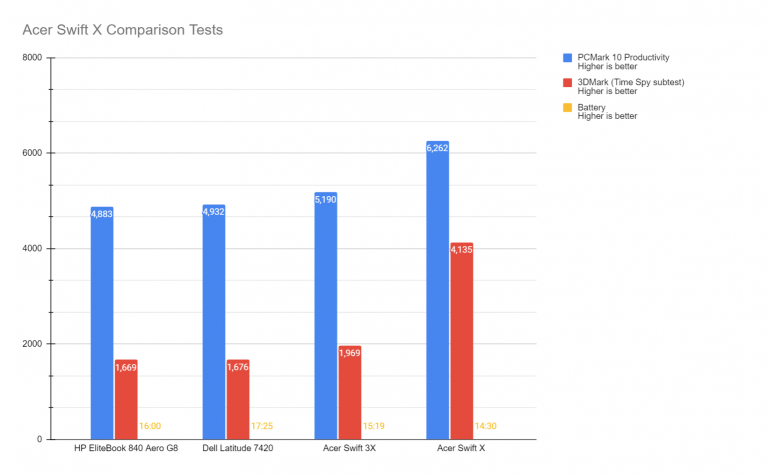 In every day-real world use, the Swift X offered a commendable experience when it came to hashing out Excel reports, navigating Teams meetings and jumping in and out of the occasional Adobe app.

The fans were audible enough at times but kept the machine relatively cool and performance unthrottled, which is a testament to the GeForce GTX 1650 GPU configuration and use of its 35W TDP on the deck as well as AMD's Ryzen 7 5800U optimizations. 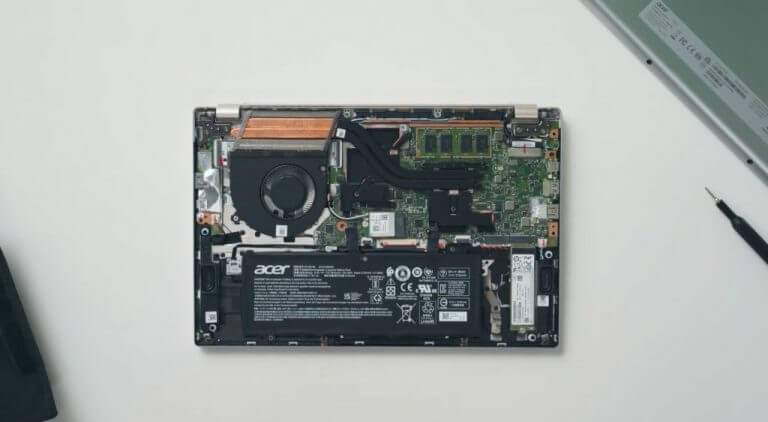 Overall, AMD's GPU configuration understandably outperforms Intel's Iris Xe discrete GPU setup on a number of applications in my workload but not by leaps and bounds. For the average person, an upgrade to the Swift X will most likely get praise for the noticeable improvements to battery, prolonged peak-performance output for tasks such as video rendering, 3D graphics editing and processor heavy macros for Excel or PowerBI and its ability to broach entry level gaming experiences. 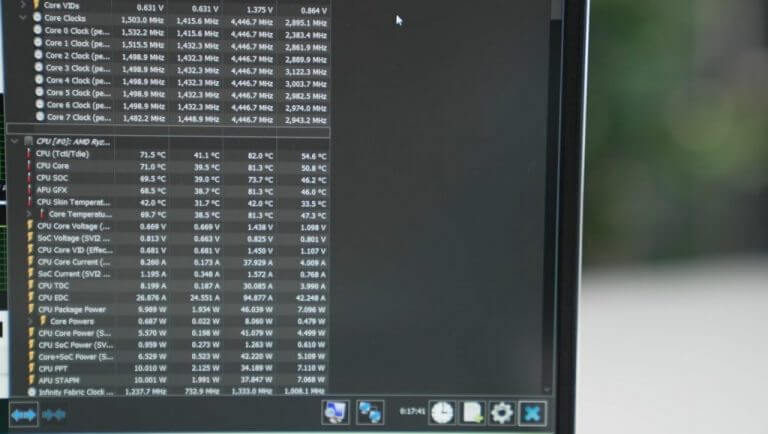 When switching over to gaming, the performance of the Swift X is surprisingly good. While the GTX 1650 is the marquee GPU brand it's the AMD Ryzen 7 5800U that does a lot of the heavy lifting for the gaming scores I witnessed thanks to Acer's iGPU leveling.

Performance on and off battery was minimally different, but the bar was hovering just above the ground at around 30 fps for most games such as The Witcher 3 and Far Cry 6.

The Acer Swift is an affordable all-around device that may lack in the style department, but offers solid productivity and light gaming experiences out-of-the-box.

Where the Swift X mostly stumbles are its connectivity which can be slow at many times thanks to the outdated MediaTek Wi-Fi configuration and the excessive software bloat the comes paired with the laptop out of the box.

Besides spending about 30 minutes setting up personal Windows configurations, savvier users will probably spend another half hour to hour hunting down and uninstalling about a dozen useless resource hogging applications and suggested software on the Swift X.

However, for around $950, what's two hours of set up for a device with above average battery life, dedicated NVIDIA GPUs and mobile processor that offers a relatively quiet and cool computing experience?

How to delete pages from a PDF file