Xbox One X was the social media winner of E3 2017, study says

Today is the last day of E3 2017, and Microsoft is probably feeling good about its latest participation to the annual game industry’s trade show. The company made a bold move by holding its media briefing on Sunday, and the new Xbox One X pretty much led the gaming narrative all this week.

Today, a new study from social listening platform Synthesio just gave us new hard data proving that Microsoft and the Xbox One X were in nearly everyone's mouth these past few days (via VentureBeat). The company analyzed all recent conversations about E3 2017 on the Internet, revealing that Microsoft was the most talked about company with 26.04% of all online mentions about the annual trade show.

Looking closer at all Microsoft mentions, Synthesio found out that the new Xbox One X accounted for 71.20% of the total, which is quite massive. Closing the top five of all Microsoft mentions are Forza (9.58%), Sea of Thieves (8.12%), Gears of War (6.19%) and Halo (1.87%). As a reminder, Gears of War and Halo were completely absent from Microsoft's Sunday press briefing (and it looks like fans noticed), though the company announced earlier this week a new DLC for Halo Wars 2.

Of course, saying that Microsoft and the Xbox One X were hot topics this week doesn't say much about what people were saying about them on the Internet. To get a more complete picture, you'll have to check Synthesio's Social Reputation Score, which also takes into account the sentiment (positive or negative) of the mentions and the social influence of commenters. The result of this analysis is slightly less positive for Microsoft, which had the third best SRS score (56.39) and closed the podium behind Electronic Arts (57.46) and Nintendo (56.46). 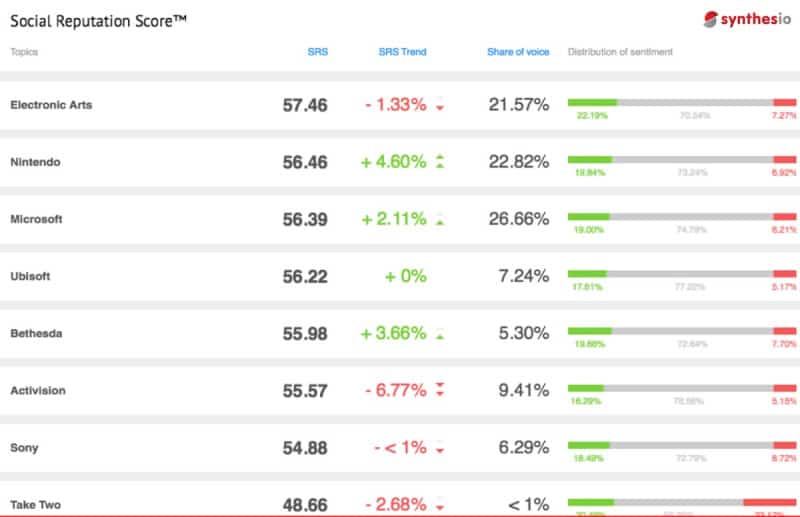 Other highlights from the study include the fact that #XboxE3 and #XboxOneX are two of the 5 top 5 hashtags used at E3 so far. For some context, Synthesio also says that 80% of all posts about E3 2017 are coming from males, with the majority of posters being between 18-25 years old.

Overall, we wouldn't go as far as saying that Microsoft "won" E3 2017, but the company certainly played its cards very well. Unfortunately, we'll now have to wait until this Fall to enjoy all the goodies that Microsoft announced this year.

How to set up linked accounts in Windows 10 Mail