Back in August, Microsoft detailed a new unified Xbox experience that would soon make its debut on Xbox consoles and mobile devices. Xbox Insiders have been able to test a redesigned Xbox One dashboard and Guide for quite some time now, and this new experience is now available for everyone with the freshly-released October 2020 Update for the Xbox One.

If you have not configured your console to sign you in automatically, you’ll notice a new “Who’s playing today” screen when booting up your console showing the different Xbox Live profiles that are already available. The other noticeable changes in this update are the new font that has been applied across the board, as well as the new rounded corners for all UI elements.

On the home dashboard, the My Games & Apps icon will now randomly display three games installed on your console, and the result looks pretty nice. Moreover, Microsoft has also redesigned content blocks for Games, People, and Community, adding videoclips auto-play and shortcuts for easier engagement with posts. 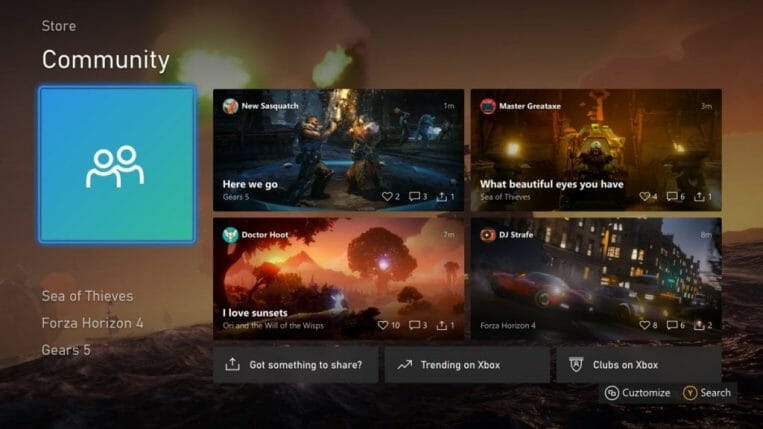 The Xbox Guide recently gained a new bottom bar with shortcuts for Notifications, Game Pass, the Microsoft Store, Search, and Volume settings, and it now looks even better with rounded corners. Microsoft has been testing a new Game Activity tab to replace the Achievements tab with select Insiders, but we’re not seeing it after installing this update.

On the Profile page, there’s now the option to set up a background theme, though there not a lot of options right now. The Xbox app on Windows 10 has a similar feature, and it’s still nice to have some consistency across the two platforms.

Also, all profile themes are now available to EVERYONE with the latest console update released today. Hope you all enjoy them! ❤️@CatamyKX @katiegarr pic.twitter.com/ERQAsDOMIn

Overall, this is a nice coat of paint the Xbox OS ahead of the release of the Xbox Series X and Series S consoles next month. Both next-gen consoles will run the same OS as Xbox One consoles, and Microsoft promised earlier some speed and performance improvements that would benefit the two different generations.