With Xbox One games coming to the PC, the Xbox will become more PC-like

Xbox chief Phil Spencer has confirmed on stage in a press event in San Francisco last week, what we have suspected all along ever since Rise of the Tomb Raider was announced for Windows 10: the Xbox is effectively turning into a PC, or at least more PC-like than ever before, reports The Guardian.

The catalyst for this tectonic shift in nature is the Universal Windows Apps model, the key that ties Microsoft’s entire hardware ecosystem together, allowing them to run the same application by sharing the underlying core. Indeed, the importance of UWA extends well beyond gaming; games are a big lure of any ecosystem however, and it is exactly because of this importance that the focus has been switched to building a full-fledged gaming cred for UWA, as Spencer reiterates. The fastest and easiest way to do it is to leverage existing capabilities; in other words, Xbox games.

“We can effectively feel a little bit more like what we see on PC where I can still go back and run my old Quake and Doom games, but then I can also see the best 4K games coming out. Hardware innovation continues and software takes advantage. I don’t have to jump generation and lose everything I played before.”

According to Spencer, the change in model will also make Xbox more PC in more ways than one. Freeing the games from the constraint of the hardware means a break from traditional console model of static configuration for the device’s lifetime, instead opening possibilities for continuous hardware iteration in the veins of laptops or mobile phones. As UWA, older games will stay compatible with new hardware; cross-play and cross-buy will also becomes easier than ever.

“Everything we do on any device is being driven by the Xbox team, and that team is 100% committed to success on every platform gamers want to play on,” “The gamer is at the centre of every decision we make.”

The new way of seeing console also means a new way of seeing sales, according to Spencer. Console sales will be replaced with monthly active user (MUA), similar to mobile games and online multiplayer games. This will reportedly allow for more accurate portrayal of gamers interest and activeness, which should be much welcomed by developers.

“We didn’t choose this metric to hide something,” “In fact, we’re more exposed because it shows how many people are actually using our platform and service every month and reporting that publicly. We’ve done it for the development community who want to know how many people they can get to by building these games. This is the success metric that all of you should be looking at.”

Developers seem to be seeing the advantages of Microsoft’s model, albeit with some hesitation still. In-house at Microsoft, Turn 10 Studios has converted Forza Motorsports engine to UWP allowing the game to come to the PC. Outside, The Guardian cites veteran indie developer Byron Atkinson-Jones, who sees UWA as a “good idea” that offers a unified environment. 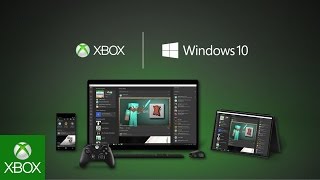 Xbox on Windows 10 – The best Windows ever for gaming

Xbox chief Phil Spencer has confirmed on stage in a press event in San Francisco last week, what we have suspected all along ever since Rise of the Tomb Raider was announced for Windows 10: the Xbox is effectively turning into a PC, or at least more PC-like than ever before, reports The Guardian. Th

Atkinson-Jones’ reservations, however, is in the potential closed-upness of the model as opposed to the current free-for-all state of PC game making; the potential redundancy of Xbox One’s console advantages, and Microsoft’s lukewarm history in PC gaming with Games for Windows. The latter of which, especially, has left a big stint with the development community, and is something Microsoft will have to address before it can get people on board for this new project.