Xbox news recap: Microsoft hides messages in their Scorpio ads, VR not being showcased at E3 and more

Queue the X-files music: Microsoft has been putting some hidden messages in their Scorpio advertising, presumably to tease some things about the console ahead of E3. While it’s no kind of full-blown alternate reality game, there are some cool details in there that are promising. A message reading 6>4, for instance, leads us to believe that Scorpio will have 6 teraflops vs the PS4 Pro’s 4. A message reading X10S101-317 has some users thinking that it’ll be releasing on October 13, 2017 (X10s (10.13.17)). In response, Microsoft’s Albert Penello just said that Xbox fans have “sharp eyes.” 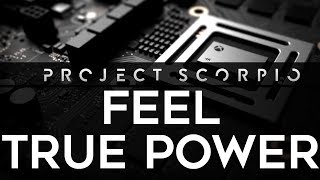 VR won’t be at E3 this year

Virtual Reality will be just about absent this year, or will at the very least not be a focus. Microsoft’s Alex Kipman stated that the company is focused on creating mixed reality experiences for PC right now, as opposed to console. This year is going to belong to Scorpio, and Microsoft is doubling down on that by dedicating most of their presentation to their newest Xbox console. We’ll see if VR is mentioned at all, but don’t count on it.

“Our primary focus is making our mixed reality experiences a success on Windows 10 PCs. We believe that right now a Windows PC is the best platform for mixed reality as its open ecosystem and enormous installed base offer the best opportunity for developers, and Windows offers the most choices for consumers.”

“Windows has been the birthplace of a variety of technologies, and we believe this will hold for mixed reality too. Given the efforts we have underway on Windows for mixed reality, and our belief that console VR should be wireless, right now we are focused on developing mixed reality experiences for the PC, not on the console.”

Mixer users will get free games and DLC for watching E3

According to a tweet from Xbox, users who log in on Mixer and watch this year’s E3 conference will be getting free games and DLC. There was nothing specific as to what games are going to be on tap for this offer – nor was there any indication that this is a random giveaway and not just a guaranteed gift. If you want to find out, you’re probably just going to have to watch on Mixer. Considering Mixer is offering objectively the best quality of video, that shouldn’t break anyone’s heart.

Initially Scorpio was going to have 12 GB of RAM, with 4 set aside for the dashboard and other simple functions. According to a tweet by Phil Spencer, the team has unlocked an extra GB of RAM for developers to play with, bringing it up to 9 total. Games that don’t use the whole 9GB will have the extra space there for temporary storage, there to help with processing and make things like loading screens go much faster.

We’ll keep tuning Scorpio to empower creators to share the best versions of their games. Unlocked extra GB of RAM for them, now 9GB of GDDR5