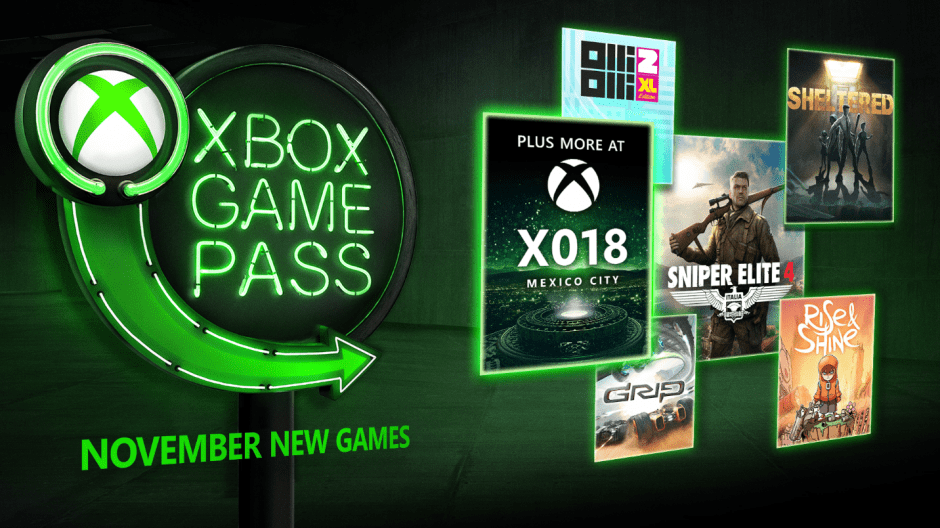 Microsoft has just announced the new games coming to the Xbox Game Pass catalog in November. Sniper Elite 4, Olli Olli 2 XL, Rise and Shone, Sheltered will be playable starting November 1, and Grip: Combat Racing will also be available on November 6, the same day as it launches on Xbox One.

The five new titles will join the four new survival horror games that Microsoft added to the catalog ahead of Halloween last week. In case you missed the news, these are Outlast, Observer, Dead Island: Riptide Definitive Edition, and Hello Neighbor. That’s already nine new games, but Microsoft plans to announce “even more great games” during its upcoming X018 event on November 10.

For just $9.99 a month, Xbox Game Pass gives you access to over 100 Xbox One and Xbox 360 games, including new first party titles on day one such as the critically-acclaimed Forza Horizon 4. You can try the service for 14 days for free, and Xbox Play Anywhere games such as Forza Horizon 4, Sea of Thieves or State of Decay 2 are also playable on Windows 10 at no additionnal cost.

Microsoft is now the world's 2nd most valuable company, behind Apple but ahead of Amazon