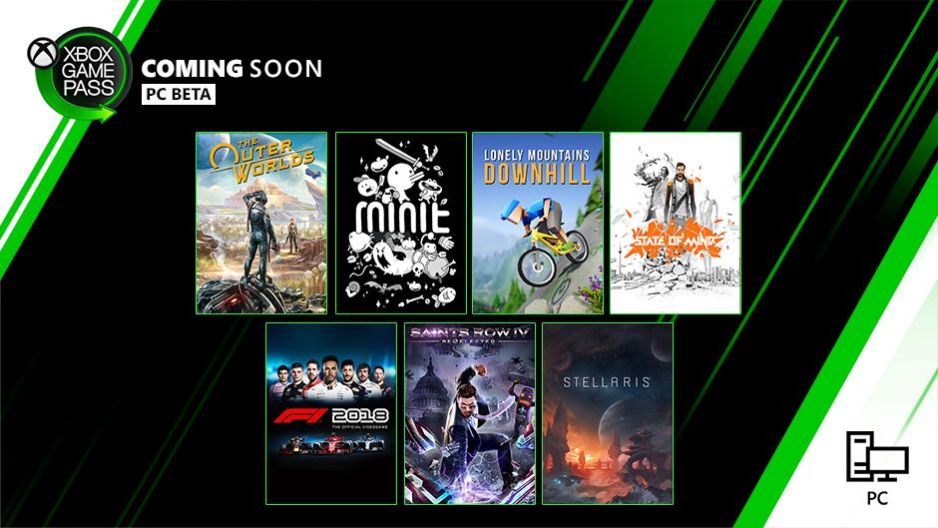 Following the additions of Dishonored 2 and Cities Skylines last week, Xbox Game Pass for PC is about to welcome 7 new games in October. The headliner is The Outer Worlds, the upcoming role-playing video game developed by Obsidian Entertainment, a game studio Microsoft purchased last year. The game will be available on Xbox Game Pass for PC and console on launch day, October 25.

Microsoft didn’t announce any release dates for the six other titles joining Xbox Game Pass for PC later this month, but there are two games that are already available on Xbox Game Pass for console, F1 2018 and Stellaris. The four other new games include Saints Row IV: Re-Elected, the futuristic thriller game State of Mind, the indie adventure game Minit, as well as Lonely Mountains Downhill, a Downhill Mountain Biking Game launching on October 23.

Thanks to Xbox Game Pass for PC, Microsoft is finally bringing more PC games to the Windows 10 Microsoft Store, with some of them coming with Xbox Live achievements as well. However, there's still a long way to go before the Microsoft Store catches up to Steam, Gog, or even the Epic Games Store, especially when the latter offers higher margins to developers and publishers, as well as two PC games for free every week.

How to set a timer on a Windows 10 PC

Yes, the new Surface devices have USB-C, but here's why you need to be careful