With no actual hardware to view, here is what Project Scorpio’s insides look like

For months now, fans have been teased with an image of a motherboard when referencing articles or news about Microsoft’s Project Scorpio. Today, Microsoft let Eurogamer and Digital Foundry take the wraps off the information behind that infamous motherboard image.

In a series of YouTube videos both Eurogamer and Digital Foundry go through the specs and details about the console and the video below, we get information about the motherboard specifically. 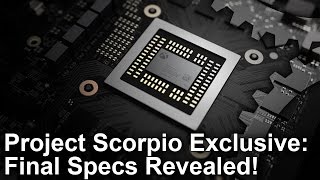 For months now, fans have been teased with an image of a motherboard when referencing articles or news about Microsoft's Project Scorpio. Today, Microsoft let Eurogamer and Digital Foundry take the wraps off the information behind that infamous motherboard image. https://twitter.com/majornelson/stat

For those too impatient to watch the 15-minute video, we find out that the SoC or Scorpio Engine is produced by TMC and houses:

Scorpio runs its GDDR5 modules across a 384-bit GDDR5 interface (“So you were right!” laughs Goossen) that uses 12 32-bit channels. The modules themselves run at 6.8GHz, offering a final bandwidth figure of 326GB/s – on top of which, Microsoft gets the benefit of AMD’s delta colour compression (DCC) system, an element that wasn’t present on Xbox One. And yes, Scorpio does indeed feature 12GB of memory, as indicated on Microsoft’s E3 motherboard render, 8GB of which is available to developers, with 4GB reserved for the system. That’s an additional 1GB of reservation compared to Xbox One, required in order to run the dashboard at native 4K. Titles still receive an impressive 60 per cent bump to overall memory though, and to ensure loading times consistent with full HD Xbox One games, Scorpio ships with a 1TB hard drive with a 50 per cent increase in bandwidth.

The video goes into more depth about the chip, by explaining that Microsoft forgoing Ryzen technology and opting for upclocked Jaguar cores.

“So, eight cores, organised as two clusters with a total of 4MB of L2 cache. These are unique customised CPUs for Scorpio running at 2.3GHz. Alluding back to the goals, we wanted to maintain 100 per cent backwards compatibility with Xbox One and Xbox One S while also pushing the performance envelope.”

With all that power, some may be worried about heat and ventilation, fortunately, it seems Microsoft was just as worried.

To cut a long story short, Microsoft is using a vapour chamber heat sink. It consists of a copper vessel that forms its basis, inside of which is ionised distilled water under vacuum. Heat is absorbed into the water, where it vapourises. The steam convects away from the hot spots and condenses on the heat sink fins. It’s highly efficient – but the heat still needs to be expelled from the system and the standard axial fans used on prior Xbox hardware wouldn’t cut the mustard.

Further consideration was given to people who might be upgrading from an Xbox One S, as the port arrangement of the console is based off the design of the current console.

Since port arrangement is based on Xbox One S, there’s no return for the original Xbox One’s Kinect port (a USB adapter is required) but the HDMI input is retained. The final form factor – the ‘ID’ as Microsoft calls it – will be revealed at E3, where we suspect you will be pleasantly surprised.

For more about engineering miracles the Xbox team came up with for Project Scorpio’s motherboard and overall build design, have a look at the slew of articles featured here at OnMSFT.