Windows Phones usage shrinks in the US as Microsoft reprioritizes

Once again, the numbers are in for smartphone usage in the US, and as expected, Windows phone numbers are receding. According to analytics firm comScore, Windows phone US market share has dwindled from the 2.8% it held in November 2015 to just under 2.5% for the three-month reporting ending February 2016.

For those still holding out hope for a Windows phone resurgence, the precipitous drop isn’t all that damning in the face of lukewarm receptions to flagship offerings, a reduction in the availability of older handsets from carriers, a delayed update rollout and utter silence when it comes to marketing new or older hardware.

However, when put in perspective, the drop signals that under 5 million of the total 198.9 million US smartphone users are still clinging to Windows phones and presumably the older models that sold relatively well, such as the Lumia 520 and 640.

In other news, Android and iOS continue their see-saw battle for market share with Android dipping slightly from 53.1% in November 2015 to 52.7% in February of this year. Apple’s iOS market share scooped up the lost market from Android bumping its numbers from 43.1% to 43.9%. 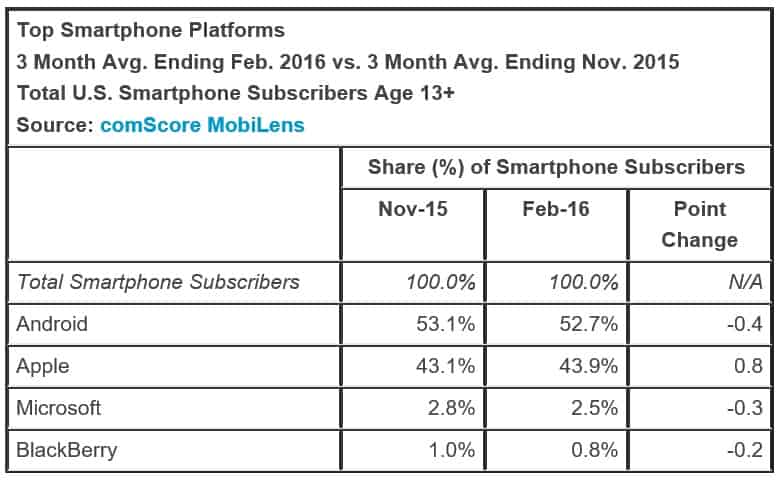 comScore also tracks app usage among Smartphone Mobile Media Users, Age 18+ and according to the list, Windows phone users have access to four of the top 15 apps used by people in the US in Facebook, Facebook Messenger, Pandora Radio, and (even in beta) Instagram.

With Microsoft reprioritizing its smartphone efforts, the numbers should be expected to fall even further throughout much of 2016 in both the US and abroad. Microsoft is presumably looking beyond glowing 5-inch screen and into AI, chatbots, cloud computing, and machine learning hoping to bring much of that back to its various platforms. However, it’s still a bit of a pain point for Windows phone holdouts to have to reevaluate a mobile landscape with little to no sign of Windows phone mobile app support in the immediate future due to shrinking consumer interest.