Once again, taking a look at the smartphone market share for the US in the month of October, Windows Phone sliced off 2.7 percent of the pie. Microsoft’s share of 2.7 percent of the smartphone market in the US is down .2 of a percent from its holdings from the previous quarter in review. While not a trend to celebrate, Windows Phone’s downward spiral held surprisingly well considering no new phones, low-end or otherwise, appeared during the months of July through October, and the US seems to be its hardest adopting region.

Other comScore numbers include Android fending off iOS with 52.9 percent market share, up 1.5 percentage points from 51.4 last quarter. Apple and its iOS platform maintained its number two spot with 43.3 percent while experiencing a negligible .9 percent dip from last quarter. The rest of the peanut gallery that includes Blackberry losing another .3 percent of the US market and Symbian, all but dead at 0.0 for the quarter, and Microsoft represented the remaining 5 percent of the market. 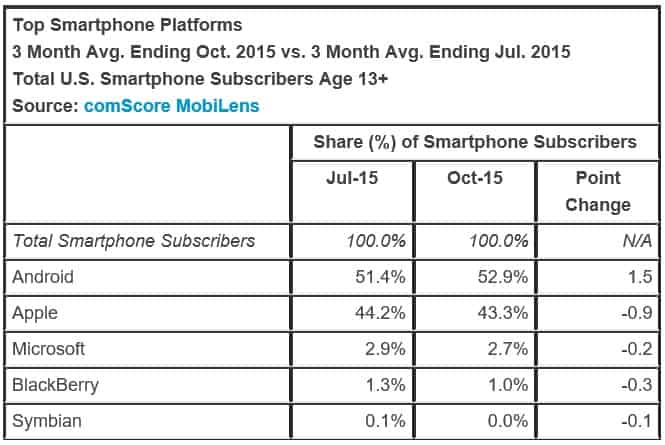 As far as phone makers in the US are concerned, Apple took top billing once again, standing at 43.3 percent, followed by Samsung wich saw a slight bump up from 27.3 up to 27.9. LG, Motorola, and HTC rounded out the list with 9.8, 5.1 and 3.3 percentage points respectively. Of the top five phone makers in the US, only LG saw a significant swing in customers, gaining .9 more while Apple lost the same amount leading up to the release of the iPhone 6S.

The top performing apps are as you would expect them to be. Facebook is still the most used app on any platform, followed by YouTube, Facebook Messenger, Google Play and Google Search. Oddly enough, the much talked about SnapChat app doesn’t rank in the top 15 apps used in the US and seemingly lags behind apps such as the Yahoo Stocks app.