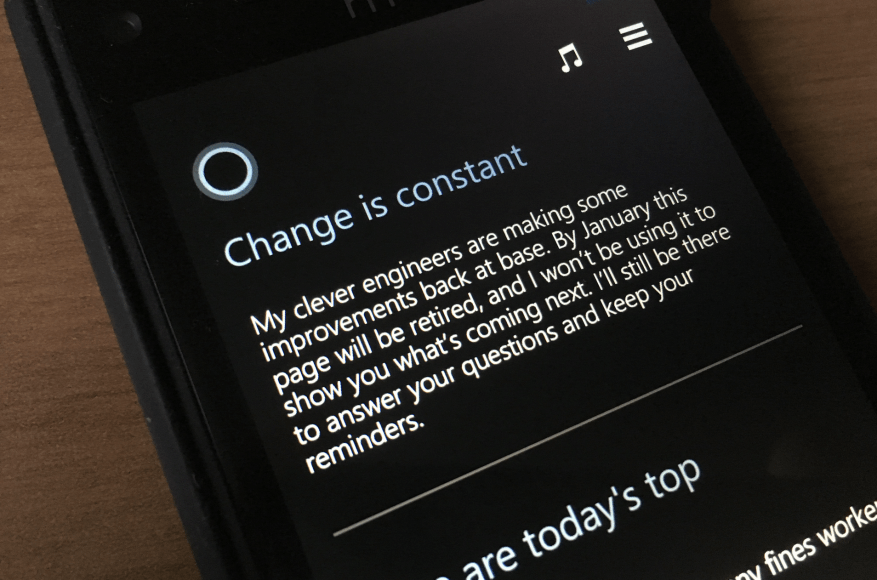 Cortana is about to lose some features on Windows Phone 8.1, the OS where it made its big debut back in 2014. As reported by All About Windows Phone, WP8.1 users can now see a “Change is constant” message when launching Cortana on their phones.

The message that follows explains that the Cortana home page featuring today’s top headlines and other personalized content will disappear in January, with no impact on other Cortana features. "By January this page will be retired, and I won't be using it to show you what's coming next. I'll still be there to answer your questions and keep your reminders,” the message says.

Microsoft officially dropped support for Windows Phone 8.1 back in July 2017, though the platform isn’t quite dead yet. The Windows Store on WP8.1 should continue to work through July 1, 2019, and we hope the same will be true for other inbox apps.

As for Cortana, its future is still unclear at the moment, especially after Microsoft's head of Cortana Javier Soltero recently left the company. The company has also started testing separating Cortana for Windows Search in the latest Windows 10 Insider builds, right after we saw the Microsoft Store welcomed an Amazon Alexa app this year (which also integrates with Cortana).

Do you think Cortana will still be a part of the digital assistants conversation in 2019, or do you think it will follow Windows Phone, Zune, and many other products into the Microsoft graveyard? Let us know in the comments below.

Microsoft raises the price of Office 365 Home in India