Microsoft has been known for some design inconsistencies, where not all of its products or apps look the same on Windows. Yet Windows 11 was a huge step forward in cleaning things up, but one more thing is in the works, too. Shared by FireCube on Twitter (via Windows Central), Microsoft is testing rounded corners, and more subtle Windows 11 design effects in Edge Canary.

These new design options come in Edge Canary version 102.0.1241.0 and is exclusive to Windows 11, but take a bit of digging to get to. You’ll first have to go to edge://flags and search for the Show experimental appearance settings option and turn it Enabled, then quit and reopen the browser.

Once that’s enabled, you can go back to Edge’s appearance settings menu, and look for the new Show Windows 11 visual effects in the title bar switch. Turn it on. You’ll also see a Use rounded corners for browser tabs (Preview) option, too. And it can be toggled to the on position as well. Once done, restart the browser, and Edge should look like the screenshot below. 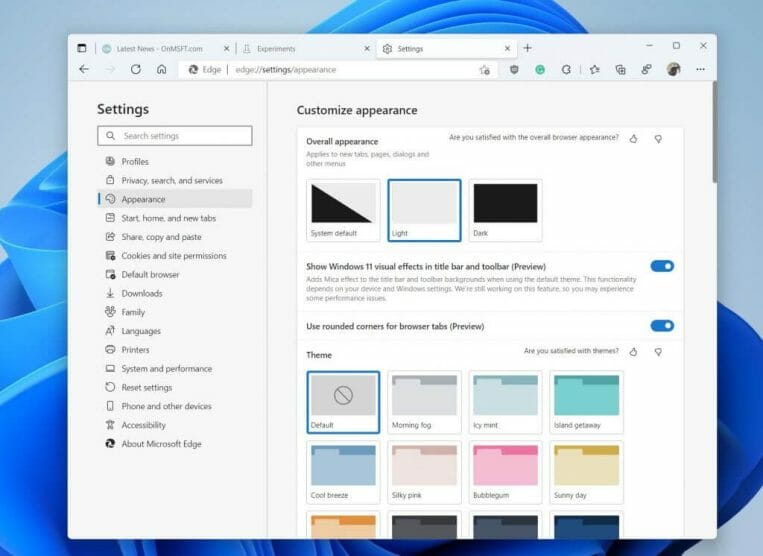 Overall, this is a really nice look, very reminiscent of the now-defunct legacy version of Microsoft Edge. It definitely helps the web browser look more consistent with the operating system that it is running on, mainly thanks to the semi-transparent mica effects that already make Windows 11 look so beautiful. Even the rounded tabs are nice, as it has more of a “floating” look, similar to what Mozilla has accomplished in the latest version of Firefox.

We hope that Microsoft rolls this design change out to the regular stable version of Microsoft Edge soon. However, features in Edge Canary are known to come and go, so just because we’re seeing this today, it doesn’t mean that it’s final. Do check it out, though, and let us know what you think in the comments below!