Microsoft has released a detailed analysis on the latest trends for the Windows Store. The main focus of this analysis is the shift to Windows 10, which was released at the end of July and is now installed on over 110 million PCs worldwide.

Thanks to this widespread adoption, Windows 10 users now account for more than 50% of all Windows Store downloads. While such a statistic is impressive given how short of a timeframe Windows 10 has been around, it’s worth noting that under Windows 10, a lot more first party apps are updated and downloaded through the Store, including the Office Mobile apps. So the statistics may be slightly misleading. 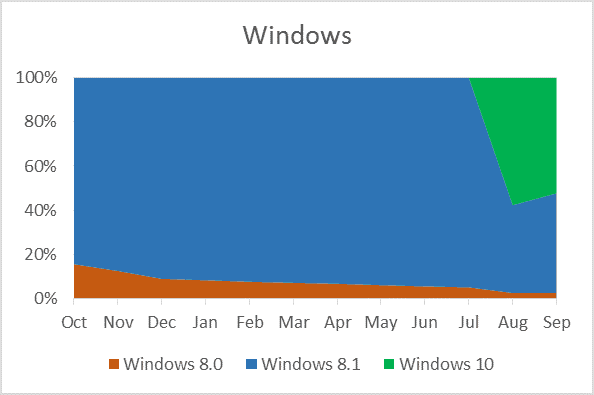 Interestingly enough, the graph shows that Windows 8.1 has actually gained ground back from Windows 10 in terms of Store downloads.

Microsoft goes on further to explain how to optimize developer strategy to maximize to reach the widest possible audience. This includes:

Games are, and continue to be, the dominant category of apps being downloaded, followed by Tools & Productivity, Music & Videos, and Social.

Microsoft also emphasizes the importance of the ratio of downloads per app. By this metric, the Social apps category wins out over the Games app category: a trend that reflects in both Windows and Windows Phone.

Microsoft notes that the highest number of app downloads and purchases tend to center around not necessarily the wealthiest nations, but the nations with the greatest access to mobile payment options such as credit cards and carrier billing. As such, the latest uptrend markets can be found in India, Brazil, and Vietnam.

Another important aspect of strengthening an app’s reach is targeting more languages. Offering apps in English exclusively will only target 16% of Windows Phone users. This is different from the tablet and desktop store, which has an English-speaking market encompassing 30% of all downloads. Growth in the non-English speaking market can be seen best in Brazil and India, which have grown by 3% and 2% in the previous quarter respectively.

Finally, Microsoft discusses monetization options. It notes that paid apps have been on the decline lately as a percentage of store revenue, and is the weakest revenue model in terms of performance, falling behind in-app advertising. The biggest generator of revenue has been in-app purchases, accounting for over half of the revenue in every category. The biggest contributors to the dramatic increase in in-app purchase revenue has been from games such as Age of Empires: Castle Siege, Age of Sparta, Asphalt 8: Airborne, and Candy Crush Saga.

The report ends by concluding that developers should begin targeting 8.1, as it is currently the dominant operating system for app users, and the code base can easily be migrated over to Windows 10.