Microsoft's Windows 10 Insider program can be a double-edged sword for many. On the one hand, there is the chance for Insiders to try out the latest cutting edge features coming to the Windows ecosystem at large. However, there is the implicit understanding that those new features need to be tested and ironed out before hitting the public, which can result in a buggy and downright dysfunctional operating experience.

For what it's worth, the Windows team traditionally outlines showstopping issues with each release and this week's new preview is no exception. Unfortunately, the issues I'm experiencing in this latest build happen to be some of the ones not listed in the engineer's extensive blog post. With the release of the feature packed preview build 15002 I have found myself hopscotching through a minefield of issues and problems that were not listed by the engineering team. Also, judging by the growing number of comments piling up at the Windows forum, I am not alone.

While bugs such as Windows Hello camera not reliably recognizing users and broken DPI scaling in UWP apps have already been noted, it's this new bag of unlisted shenanigans that have me contemplating rolling back to a more stable release.

While it would seem fitting for the download of build 15002 to break before, during or immediately after installation, for me, that didn't happen. Instead, after a 45 min wait sitting on 95%, I was welcomed with the traditional Windows 10 setup process. It wasn't unit hour 52 and several sleep cycles that I was introduced to my first unlisted issue in a frozen taskbar. 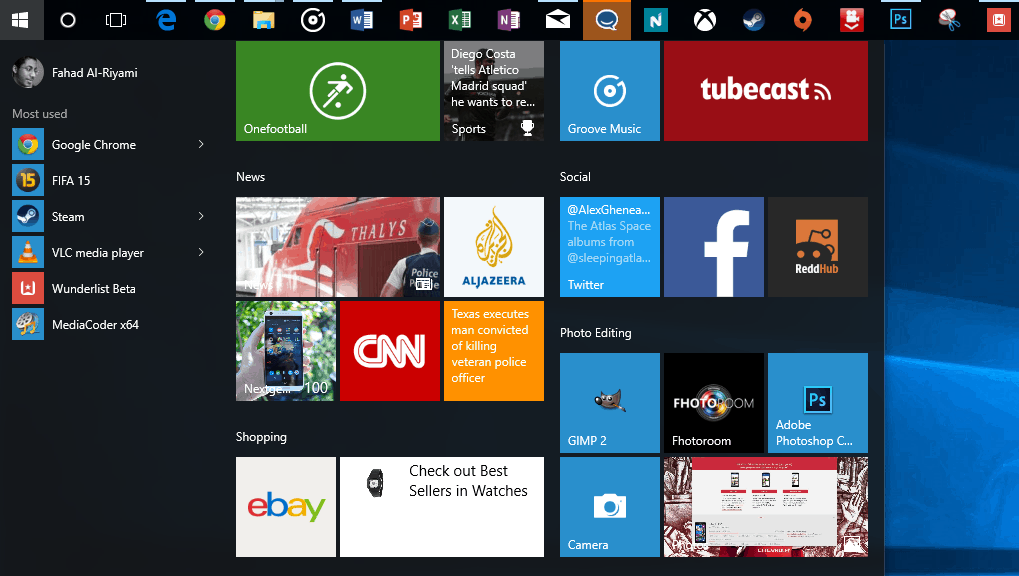 Without warning, the entirety of my taskbar froze after a routine lid to wake process. Without being able to open my Start Menu or access any of my pinned apps, I reflexively restarted my PC. Restarting the PC did nothing to fix the issue and effectively left my PC useless. Fortunately, being an Insider, patience has proven a strong remedy for most OS bugs and issues to a degree. Waiting roughly 5 to 10 minutes without touching anything apparently allowed the system to self-correct. The frozen taskbar issue would continue to crop up for another day.

Just installed....long time to actually get up and running

No windows start. (show all programs

The frozen taskbar issue would continue to crop up for another day.

Searching the Windows forum for answers, the community is still solution-less.

Another build 15002 related bug that is seeing increased occurrences is the hanging boot login. Perhaps, a clear indication to drop out of the current preview of Windows 10, is the new issue of not being able to get past the login screen.

Here is the note from someone experiencing the issue and is seeking help from Microsoft and the Windows team.

Dual boot with insider preview the default, and the anniversary version(1607) on another partition on a Toshiba S70 Satellite laptop.  I've never had this kind of problem with dual booting along side another Windows 10 version.

15002 preview hangs up after password login on the blue screen that shows my name( a sort of welcome screen). That circle of dots just stops after about three turns and won't get to the desktop.

After about 10 minutes I hit the laptop power button and shut it down.

Then restarted and got a black screen with 'Starting the Automatic Repair' message.

After about 5 minutes it booted and went to my desktop.

I shut down later, and restarted again, and it hung up again on the screen after entering my password.

I ran SFC but no errors found, so I did not run the DISM thing.

No problems of any sort found with the trouble shooter.

Anyone got suggestions or ideas as to why 15002 won't boot properly?

I did revert to 14986 and set it to slow ring for now, but willing to let it update again and give it another try, but would really like it to get past that 'sort of welcome' screen and let me continue using and testing.

While I wasn't dual booting, I did run into this issue recently and was forced to refresh my PC in order to get around it. Thanks to some F12+ESC upon start up-trickery, I managed to sidestep the frozen login bug.

There are a handful of other annoyances but between these two major malfunctions, I was very tempted to skip this round of Insider goodness. Fortunately, there are workarounds for these specific incidents and a PC refresh seems to temper most of the bugs I've been experiencing.

Check the Windows blog for the known issues list and heed the above issues as a potential reality with this latest Insider build.

Let me know in the comments below, what other issues you're running into that have not been picked up by the Windows team.