The beloved AdBlocking extension, uBlock Origin, has been released on the Windows Store. It features better performance results than it’s competitors, is fully open source and manages to stay alive without any deals with advertising agencies like it’s competitors do.

The extension has had an unofficial port before, but now it officially supports Microsoft’s web browser without any workarounds or hacks. It does not require sideloading and works mostly as intended. However, note that the extension is still in a preview which means that it may contain some bugs and missing features.

The Windows 10 Insider program continues its trend of releasing new builds for the members, and this time we can see a pretty big update for PCs, however, no builds for mobile insiders just yet. 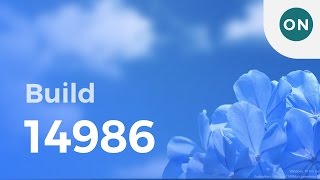 Welcome back to our Windows 10 news recap. We are continuing the trend of our weekly “Windows 10 news recap” series where we go over the top stories of the past week in the world of Microsoft’s flagship operating system. uBlock Origin released (in preview) for Microsoft Edge The beloved AdBlocking e

The update is the first one to be delivered by the new UUP system which reduces the size of downloads drastically. It has new Xbox Game Bar improvements, a lot of new commands for Cortana, new Universal Windows Defender app and much more. It also features a new rendering system and therefore any UI glitches you find in the apps should be reported to the Feedback Hub as fast as possible:

“Please provide feedback through the Feedback hub if you notice any new visual glitches in UWP apps. For additional context on this change, we are now widely using the same Windows.UI.composition API that app developers have access to for XAML UWP app and shell rendering.”

Unfortunately, everything has to come to an end. NBC is shutting down its Windows 10 apps as well as the whole Breaking News service. This is very sad as a lot of people will lose their jobs, users enjoying the service will have to find an alternative and yet another company has to drop support for Windows 10.

My thanks to NBC for taking a bold bet and financing us for so long. Nobody has done what we've done, and we're damn proud of it. /6

NBC had financed Breaking News for a long time, “Unfortunately, despite its consumer appeal, Breaking News has not been able to generate enough revenue to sustain itself.”

The famous Secure Boot hacker known as Longhorn or My123 has released unofficial ports of PuTTY and 7zip for the unreleased Windows 10 on ARM project. Longhorn has access to internal versions of Visual Studio which features an ARM64 compiler.

This screenshot has nothing special. #Windows10 pic.twitter.com/Y2CoMPrIWN

The tools can already be downloaded but unfortunately, nobody can actually run them without access to the Windows on ARM (WoA) devices which will be released next year.

With Microsoft heavily focusing on 3D, it was just a matter of time before Microsoft would release a 3D model viewer for Windows 10. And here it is. View 3D preview is a Photos-like viewer for 3D models which you can download from Remix3D.com or make your own in Paint 3D preview.

The app supports mobile as well as PC and features a sweet dark theme, which doesn’t seem to work on Windows 10 Mobile. The app supports many different “industry-standard” formats which are common in other 3D creation software and is fully compatible with Windows 10.

This is it for the news this week, but we will have more so make sure to check back here in seven days.