Microsoft has just released the Windows 10 preview build 20231 for the Dev Channel, which brings two new improvements that will only be available to select Insiders. First of all, Insiders doing a clean install of the build 20231 (ISOs are available here) may notice a new page during the out of box experience allowing them to choose how they plan to use their PC.

The current list of options includes Gaming, Family, Creativity, Schoolwork, Entertainment, and Business, and each of them will suggest tools and services during PC setup. "This is the initial wave of work for this feature, and Insiders may notice different options presented in OOBE depending on what they select, however at this time Insiders will not notice any other configuration differences after exiting OOBE," the Windows Insider team explained. 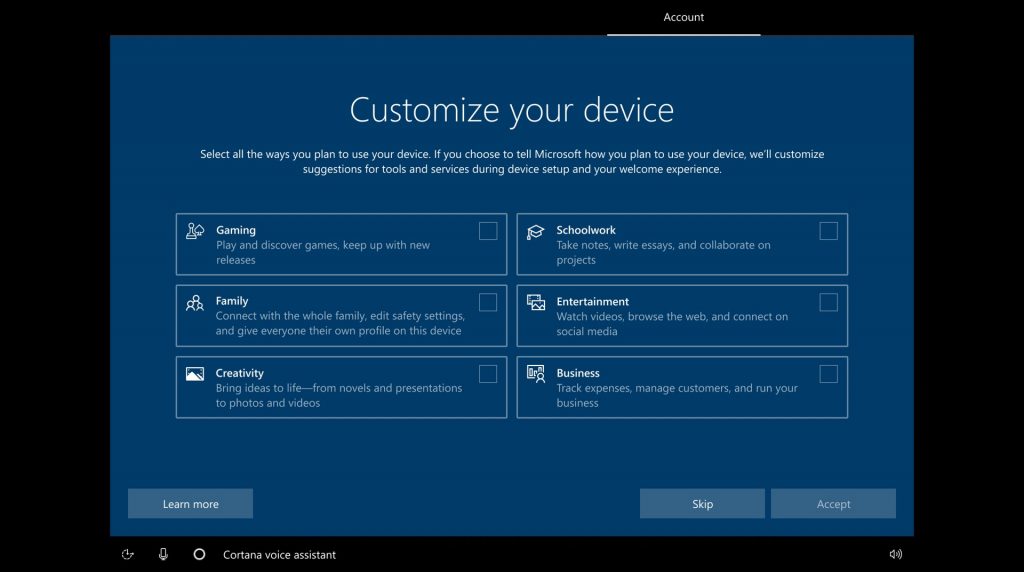 The second new feature in this build is the ability for IT admins to change app default file associations on a per-user or per-device basis. This feature will only be available for a subset of Insiders installing this build, and you can find the testing steps below:

Starting with this build, some Insiders may also notice a change to enable displaying graphics card information listed under Settings > System > About. The build 20231 also brings various bug fixes and known issues, and you can find the full list below:

Last but not least, the Windows Insider team said today that all Insiders in Dev Channel will soon see the new Skype Meet Now in the Windows 10 Taskbar, as well as the recent change to enable moving the text cursor via gestures on the touch keyboard. That's it for today's Insider news, let us know in the comments if you think these new options to customize your PC during the installation of Windows 10 are a good idea.