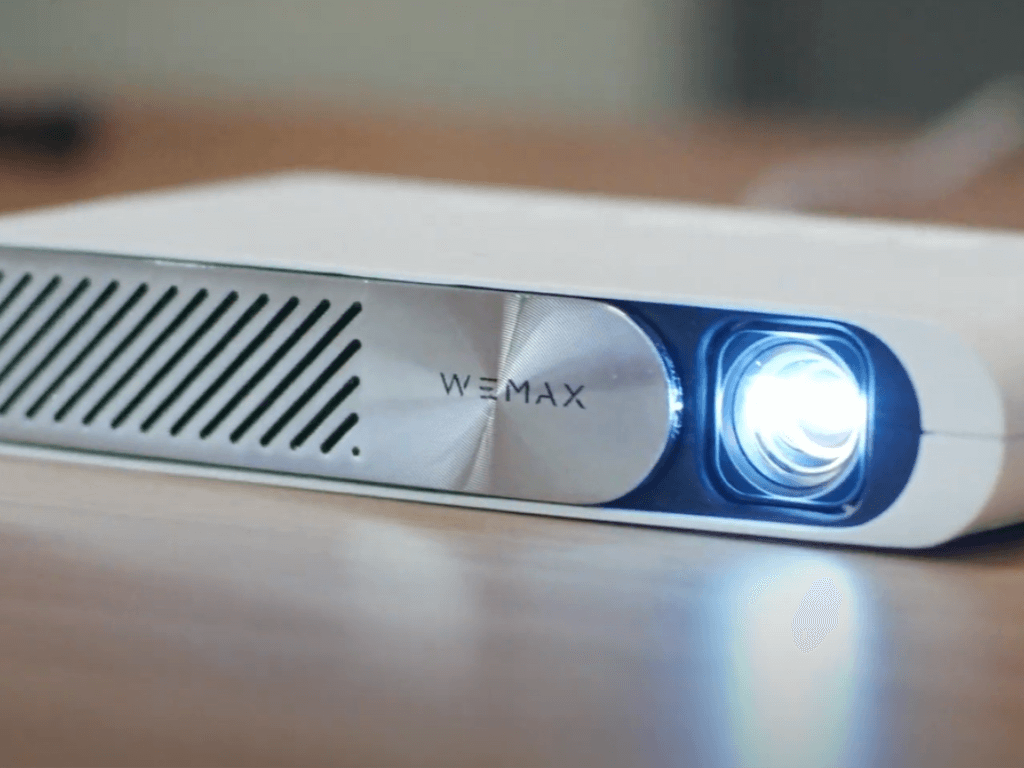 While laser projectors remain a hobbyist-level consumer group, their utility can cover movie enthusiasts, binge-watchers, gamers or even decorators, and the Wemax Go Laser Projector does all of it with a level of convenience rarely seen for the category.

I'd consider myself a traditionalist when it comes to living room entertainment setups. A large screen paired with some sort of audio booster which sit atop some wooden cabinet flanked by family pictures and the occasional plant or custom piece of artwork. 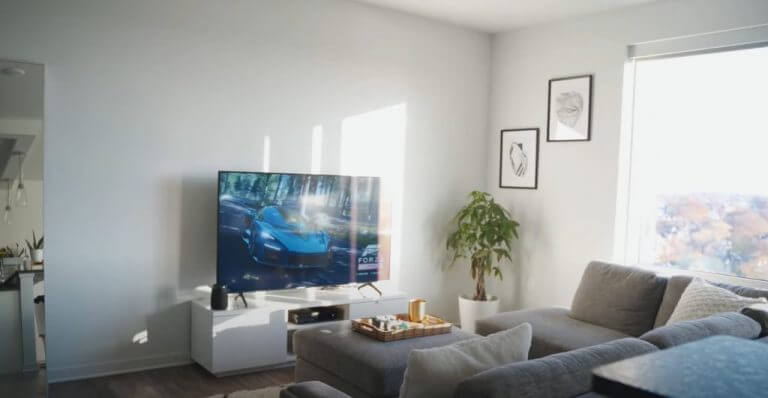 The motif may be as boring as ever, but its utility has served me well for decades. However, my brother-in-law who is audio engineer, has been tinkering with laser projectors for a while now in his pursuit of the best viewing experience he can muster, and after using the Wemax Go Pro Laser Projector, I might have to follow him down the rabbit hole.

I was sent the Wemax Go ALPD FHD Laser Projector from Wemax about two weeks ago. The entire projector package came in two separate boxes, one for the smartphone sized laser projector and the other for the 50-inch Advance ALR Screen. Scanning their IndieGoGo page, the combo of both the laser projector and screen will run the price of an average 4K flatscreen from Target, at $299 for the projector and $199 for the screen. 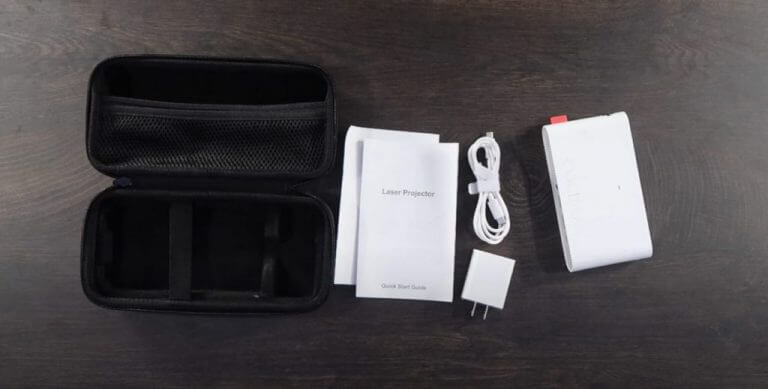 Fortunately, I tested the laser projector without the screen and the clarity is still top notch, so you may get away with skipping the $199 screen, if you have lightly color walls with no abrasive textures, or you could splurge and get the combo for $599 for an "early bird special" price.

As I said the combo comes in two packages and the first, with the laser projector, is the smallest of the two. Inside the box is pretty straightforward packaging of the Wemax Go, which comes in its own hard fabric carrying case and with USB-C power cord, and adjustable viewing mount. 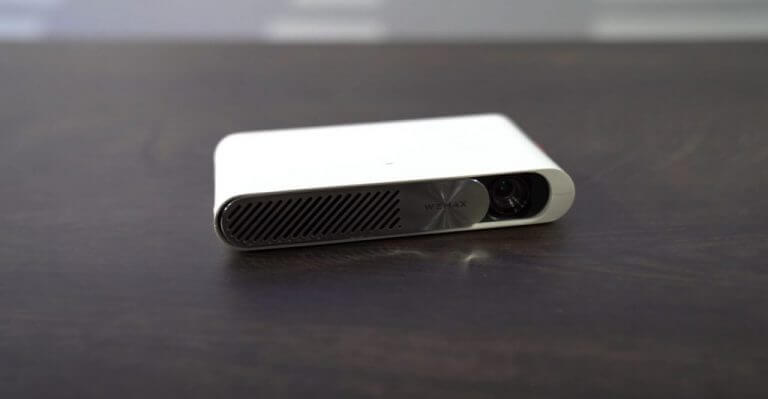 The projector itself measures 5.94x3.27x0.97 inches or roughly the length of an iPhone 13 Pro Max and the width of a large power bank. The Wemax Go is very portable which was something I appreciated as I looked to supplement my viewing options in my tiny townhouse.

The Wemax Go comes in white with a chrome front that uses a sliding hinge to cover and uncover the lens. The laser projector feels dense and compact without feeling too heavy to move at a moment's notice.

Around the back are where the audio out, USB, HDMI, and Type-C DC IN reside, keeping most setups very streamline and clean depending on where this is placed. 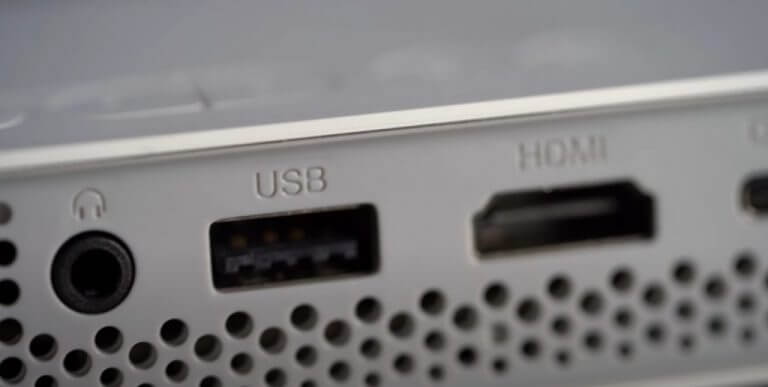 The entire package feels premium easy to handle thanks to its compact size and material build. Tossing the Wemax Go in a backpack, medium-sized purse or large pocket is easy, convenient and safe thanks largely to its rounded and streamline design where there are no protruding parts to get snagged on and the built-in lens protector.

Laser projector tech has evolved nicely over the decades and Wemax pushes forward with its new patented ALPD technology to help produce twice as much brightness as older projectors I've used.

Combined with the immersive 300 ANSI Lumens led light and auto Keystone Correction, the picture quality is impressive with or without the screen. Wemax claims there is a 500:1 FOFO contrast ratio as well as 960x540p resolution for the Wemax Go. The Wemax Go Pro which they also sell, comes with the more standard 1920 x 1080p resolution but same 500:1 FOFO contrast ratio. 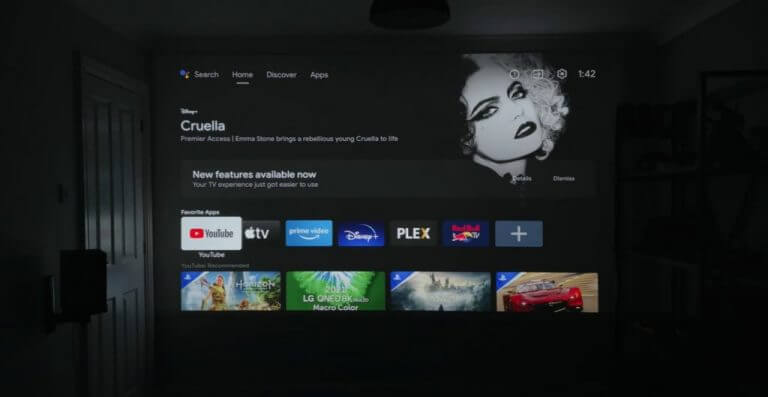 The Wemax Go can spread a picture across a vertical measuring anywhere from 15-100 inches with full clarity.

As I previously mentioned, I already have a slot allocated for my TV and its peripherals set up in the living room, but I tested the Wemax Go in my bedroom where there was plenty of space to get an immersive viewing experience.

The Go version of Wemax's laser projector has a measly but usable 1W speaker, 128M of internal storage, lacks Bluetooth, autofocus, DLNA casting, but all of those things can be found in the Pro version for an additional $299.

In everyday use, the Wemax Go sat in adjacent windowsill and made for some great viewing experiences in an area that couldn't accommodate my traditionalist setup.

Before getting to your content, your met with a Spartan-like Windows 98 desktop UI that takes some time to get comfortable to navigate. There aren't many menu options but using the built-in toggles on the Wemax are a bit frustrating to maneuver and often times you're backed out of menu options to restart the entire process over again. 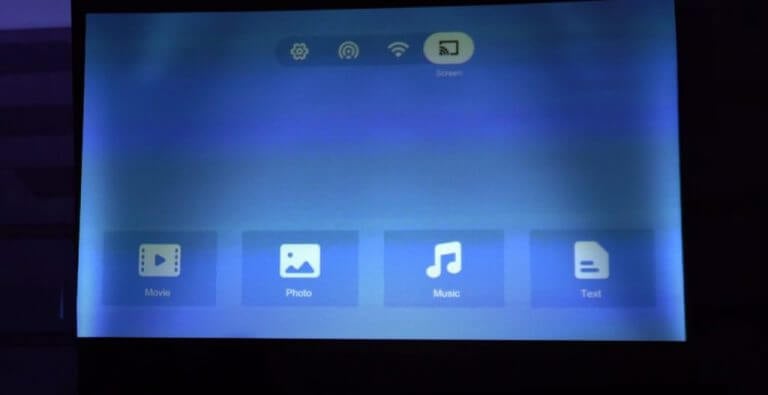 However, once things are setup, meaning, WIFI, sound options and media sources are put in place, the Wemax Go literally shines. Perhaps, thanks in part to the boosted brightness from the ALPD technology, you can easily see content during the day with the windows wide open.

I managed to make use of the Wemax Go as a very large desktop screen for some at-home-in-bed productivity, as well as plenty of Xbox game play and Netflix, Hulu, and Disney+ binge watching. In my final days of testing the Wemax, I played Forza 5 and Halo Infinite Multiplayer which made going back to my current 52-inch feel rather dull.

Aside from its compact shape, the Wemax can also link up with a 12,000mAh power bank for four hours of continuous viewing if you wanted to take it outside or to a friend's house. 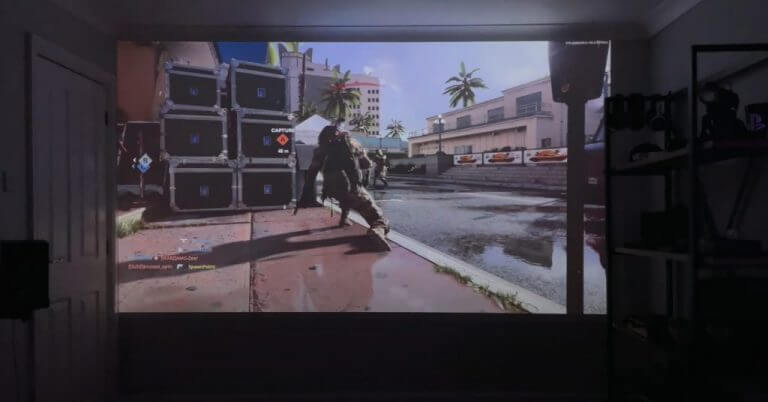 As for some negatives with the Wemax GO, there are vents along the back and there is an audible noise that can be heard throughout its use if you sit around three to four feet near it.

The viewing mount can take a while to adjust to level out the picture, especially since auto focus, Intelligent Obstacle avoidance, and Intelligent Screen Alignment are left for the Pro model.

The Pro model also comes with a controller which would have brought the Wemax Go closer in line with the convenience of traditional flatscreen TVs and made the transition from one, much easier.

Aside from those few quibbles, I'd say the Wemax Go at $299 is a good deal for a very compact, bright, and clear laser projector.

For anyone who runs from meeting room to meeting room and doesn't want to fiddle with the in-house tech the Wemax Go is a great portable solution.

For anyone who is looking to retrofit their home with additional entertainment nooks for a family with growing diverse interest, the Wemax Go is a solid option. For gamers looking to expand their view from their go-to 34-46 widescreen panels, plastering a battlefield across 100-inches isn't bad either.