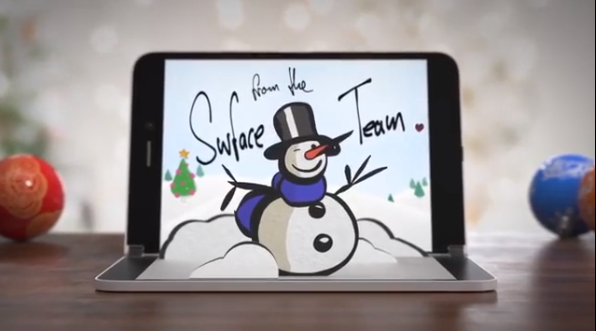 For all the keynote and hardware reveals he’s been on camera leading, VP of Microsoft devices Panos Panay remains a relatively private individual both on and off the internet. However, when he does pop his head out and appears on the internet for brief moments at a time, it’s usually to either reinforce a recent Surface related pitch or foreshadow an upcoming one, and during his Christmas vacation, he seemed to imply both with a simple tweet.

The seemingly innocuous holiday greeting has been met with rampant speculation over the past 23 hours and perhaps, for good reason. As mentioned before, Panay is a relatively private person and tends to only engage in selected Surface related conversations online. The fact that Panay chose to use a Surface Duo in his 2019 holiday greeting post across the internet seems apparent and purposeful, coupled with what looks to be a hand-drawn holographic message from the Surface Team, the message has many turning their gears on the what and why of his choices.

Detail scrubbing investigator The Walking Cat has a few theories and patent reveals that imply Panay’s message could be one of foreshadowing holographic abilities coming to the Surface Duo upon or after its release next year.

IIRC there were some patents talking about displaying holograms 'floating above' screens ??? 🤔 https://t.co/mA66XWrHYZ

also there were rumors like this: "Microsoft wants to build a holographic display to be able to show holograms" @bdsams https://t.co/1HJFSEwOeW

It has been 23 hours since Panay posted his greeting message and has yet to engage with any subsequent commentary, not that many expect him to. While the message may be as unintentional as it readily appears, what we do know is that the Surface and Windows teams are working hard at bringing new dual-screen hardware and software experiences to the public in 2020, that augmented reality (and holographic technology) have been areas of focus for Microsoft over the past four years and that smarter camera tech is being miniaturized and distributed daily through new mobile devices.

Panay, may or not may not be offering a wink and nod about the upcoming Duo release, but what is certain is that Microsoft has plans to release two dual-screen devices in 2020 and it’s rare for Panay to hint at things he’s can’t eventually get “pumped” for.