This past week, the Surface Duo was spotted out in the wild, but a new video is now showing it in action for the first in the real world (via All About Windows Phone). The short clip reveals a game being played while the device is folded in a landscape mode, and so much more, but the overall experience seems a bit rough around the edges.

Posted on YouTube by Israel Rodriguez, the roughly 2 minute and 24-second long video isn’t the best quality, and it begins with a few still images of the Surface Duo. More importantly, though, at roughly the 30-second mark, the clip shows the Surface Duo in a folded landscape position, with one of the screens facing the outside. We also can see the user playing with what looks to be an Android game in this position. This game being played is loaded in a letterbox mode, with black bars around the side of the game. 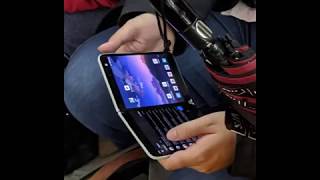 This past week, the Surface Duo was spotted out in the wild, but a new video is now showing it in action for the first in the real world (via All About Windows Phone). The short clip reveals a game being played while the device is folded in a landscape mode, and so much more, but the overall experie

As Surface Duo is still in development, we can’t really expect the software to be already 100% polished. And indeed, this video shows that Microsoft may has some work to do to iron out some bugs. As an example, at roughly the 56-second mark, we see the user of the Surface Duo struggling a bit to pull down the Android notification bar, and only some of the notification bar icons appear in the corner of the screen. It’s not clear if this is by design, but later at the 1:11 mark, the user goes back to the game again and attempts to bring back up the notification bar, but once more fails. The user also tries to swipe up and go to the Android home screen while in the landscape mode, but the device fails at that too. Instead, he has to turn the Surface Duo back in a vertical mode before swiping twice to close the game.

The video ends with shots of the user flipping open the dual-screens on the Surface Duo and opening up two apps side by side. This part looks to be the most efficient, as we’re able to see the apps open, close and move from one screen to the next with ease. We’re also able to see the Surface Duo fully closed, and there doesn’t appear to be a camera on the back of the device, either.

This clip is fairly interesting. Although Microsoft is apparently confident enough to test the Surface Duo out in the wild, there’s still work to be done on the software side. Surface Duo will be Microsoft’s first Android device, and even though Google has brought support for foldable phones on Android 10, Microsoft is trying something different with a dual-screen device. The software giant is leveraging its expertise with the Android Microsoft Launcher to cook something special for Surface Duo, but  the overall experience looks a bit rough in this video. Again, that’s to be expected on what is likely a developer unit, and hopefully things should be different once the device hits store shelves later this year.