With the launch of Microsoft’s latest Windows 10 Mobile flagship handsets, the Lumia 950 and Lumia 950 XL, came a flurry of controversy surrounding the availability of both devices. We learned in October that both new flagship devices would be exclusive to AT&T, which caused people to assume that Verizon and T-Mobile weren’t interested in carrying Microsoft’s latest Windows 10 Mobile smartphones.
One brave soul filed an FCC complaint about Verizon “blocking” the Lumia 950 and Lumia 950 XL from their network, and she received a response from Verizon’s Consumer Inquiries & Complaints Division. Turns out, Verizon was never approached by Microsoft to have the Lumia 950 or Lumia 950 XL on the Verizon network.
“Because there has been little consumer demand for Windows 10 Smartphones, Verizon has chosen to not carry the Nokia Lumia 10 in its retail channels. However, if Nokia still wanted to make the device available to Verizon customers, it could have the device certified for use on the Verizon network through Verizon’s Open Development program. To date, Nokia has not chosen to do so,” the remark states. In this case, Verizon is referring to Microsoft when they say Nokia in the response letter. 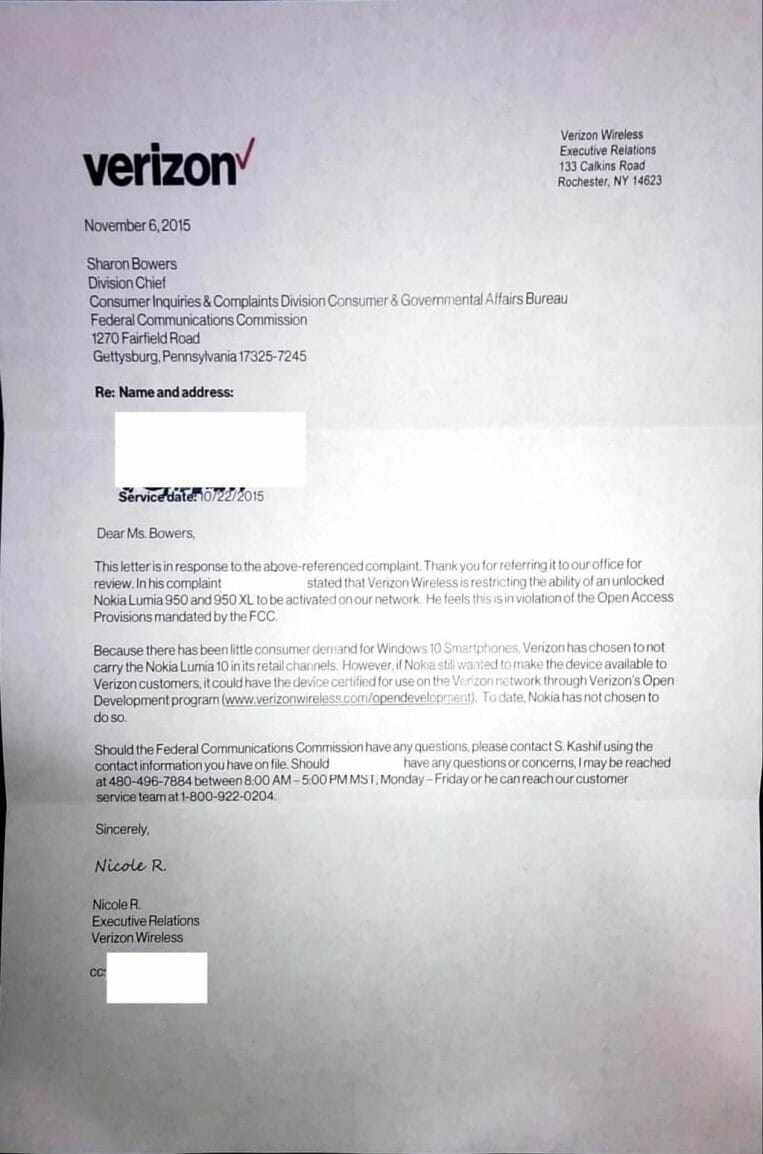 Funny thing is, T-Mobile CEO John Legere said nearly the exact same thing back in October when people blew him up on social media claiming T-Mobile was “not interested” in selling the Lumia 950. In fact, Legere disagreed to that statement claiming Microsoft was the one making that decision.
“To be clear: We did not turn down the new Windows devices. MSFT gave to AT&T. If Microsoft wakes up, we’ll talk about T-Mobile carrying,” Legere stated.
Verizon is making it seem like it’s as easy as submitting a request via Verizon’s Open Development program to get the phones on the carrier’s network. But what’s stopping Microsoft? The Redmond giant hasn’t specifically stated that AT&T has exclusive dibs on the phones, so what’s the problem? There’s definitely more to the story behind the scenes.
At the moment, you can only purchase the no-contract AT&T Lumia 950 for $598.99, and the unlocked Lumia 950 for $549.00 via the online Microsoft Store. The unlocked Lumia 950 XL can be purchased for $649.00 too.
We’ve reached out to Microsoft for comment on the matter. We’ll update this story as soon as we receive it.

Lumia 520 hacked into running Windows RT because why not