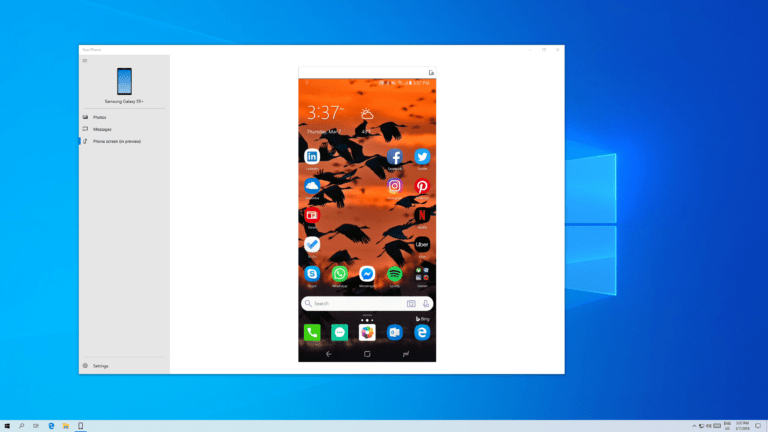 Microsoft has been working at making mobile phones integrate with the Windows 10 experience primarily through the Your Phone app, allowing users to manage texts, images, and notifications from their mobile devices straight on their desktop computers. For Surface device owners who happened to also have a compatible Galaxy device, users could also take advantage of wireless screen sharing, allowing them to use their phones straight on their PCs.

The new Samsung Galaxy Note 10 will come built-in with screen sharing capabilities, and will work on any Windows 10 device running the April 2019 Update or newer, according to Windows Central’s Zac Bowden. And to top it off, screen mirroring will also work without the use of Bluetooth at all, requiring only that the computer and Note 10 be connected to the same Wi-Fi networks.

Yes! The new Note10 can use the phone screen feature on any Windows PC running 1903, no need for Bluetooth.

Bowden describes the overall Your Phone experience as “better than it ever has been on other phones,” with notifications and messages coming in nearly instantaneously when pairing his Note 10 with the Surface Studio. Microsoft has worked closely with Samsung to make the device work as closely with Windows 10 as possible.

While the wireless screen mirroring via Your Phone can certainly be useful on its own, some users might also benefit more from the new DeX integration with Windows and Mac. Using just a single USB type-C connector, a user will be able to access the full DeX experience right on their desktops, and even be able to drag and drop files between the two.

Microsoft is also planning on integrating cellular calling from the Note 10 with the Your Phone app by the end of the year, as they announced at Samsung's Unpacked media event announcing the Note 10. Are you thinking of picking up the Note 10? Let us know in the comment area below.

How to enable "enhanced" search in Windows 10

Minecraft Earth closed beta is coming to Android devices next week, you can sign up now