The latest on leaks leading up to today's Microsoft Surface event - OnMSFT.com Skip to content
We're hedging our bets! You can now follow OnMSFT.com on Mastadon or Tumblr!

Microsoft Surface event will kick off this morning at 10AM EST (you can watch the livestream and follow our live blog here), and so far Microsoft has been able to keep under wraps pictures of its "dual screen Centaurus” device, as well as Windows 10 X, the new OS that will power it. Previous leaks gave us a lot of details about Surface Pro 7, the Surface Laptop 3, and the new ARM-powered Surface Pro, but there are two interesting new leaks worth mentioning this morning ahead of the big event.

Earlier today, Roland Quandt from the German blog WinFuture.de shared to images showing the left side of the new Surface Laptop 3, which will have an USB-C port next to the headphone jack and USB-A port. Microsoft apparently plans to make the 13” model available without the Alcantara keyboard. According to Quandt, the Platinum and Cobalt models will keep the Alcantara fabric.

Surface Laptop 3 13in w/o the stjuuuupid alcantara... (no massive gap btw base and screen) pic.twitter.com/hWNlTXxszG

Another interesting leak comes from Evan Blass, who previously revealed that Microsoft’s new "Windows Lite” OS would be called Windows 10 X. Earlier today, Blass tweeted that the new ARM Surface Pro, codenamed Surface Campus, will be named “Surface Pro X.” We’re looking forward to see how Microsoft will market this new ARM tablet, especially since many of us keep in mind what Apple did with the iPhone X two years ago. 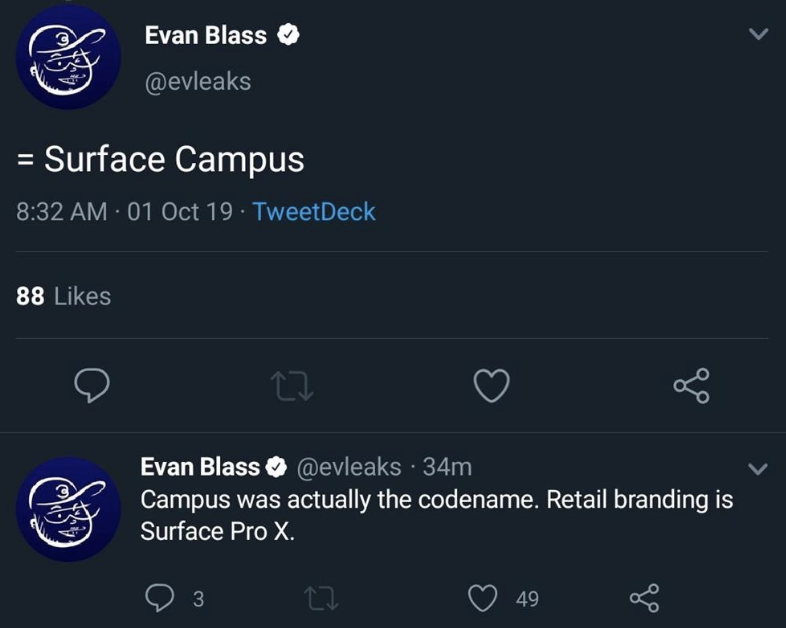 If we expect the new ARM-powered Surface Pro and the dual-screen Surface device to be the highlight of today's event, we also expect new Surface accessories that haven't been revealed in leaked pictures, and there have also been reports about Surface earbuds, as well as a new portable speaker from Microsoft. We won't have to wait much longer to find out if these reports were accurate, and again we invite you to follow our live coverage of the event on this page.