Television streaming surpasses cable TV viewing in the U.S. for the first time, according to Nielsen

We have now reached the point where streaming movies and television from the internet in the US is more commonplace than traditional viewing platforms like broadcast and cable TV. Streaming apps like Netflix surpassed cable networks to garner the biggest share of American television viewing in July, for the first time ever.

Compared to last July those statistics were 28.3%, 37.7%, and 23.8% respectively, marking a 22.6% year-on-year increase for streaming. Broadcast and cable TV viewing each dipped by several percent from this time last year.

Of the major streaming platforms, Netflix garnered the biggest share among them with an even 8%. This included almost 18 billion viewing minutes of Stranger Things Season 4. Hulu had 3.6% share for July, a record for the platform. And Amazon Prime Video had 3%.

Streaming increased 3.2% from June to July this year, while cable dropped 2% during that time and broadcast TV viewing was down 3.7% from the month prior. 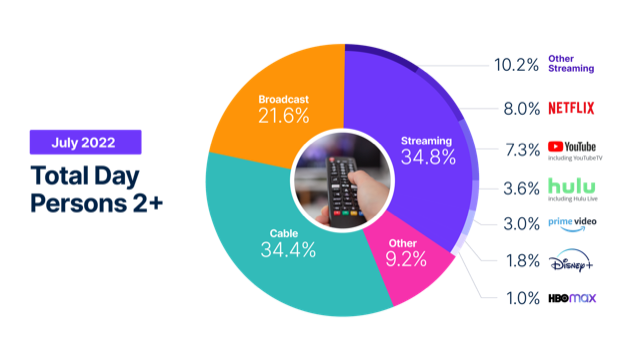 All data is courtesy of Nielsen. Note that the data used is from TV viewing, and does not include web and mobile viewing.