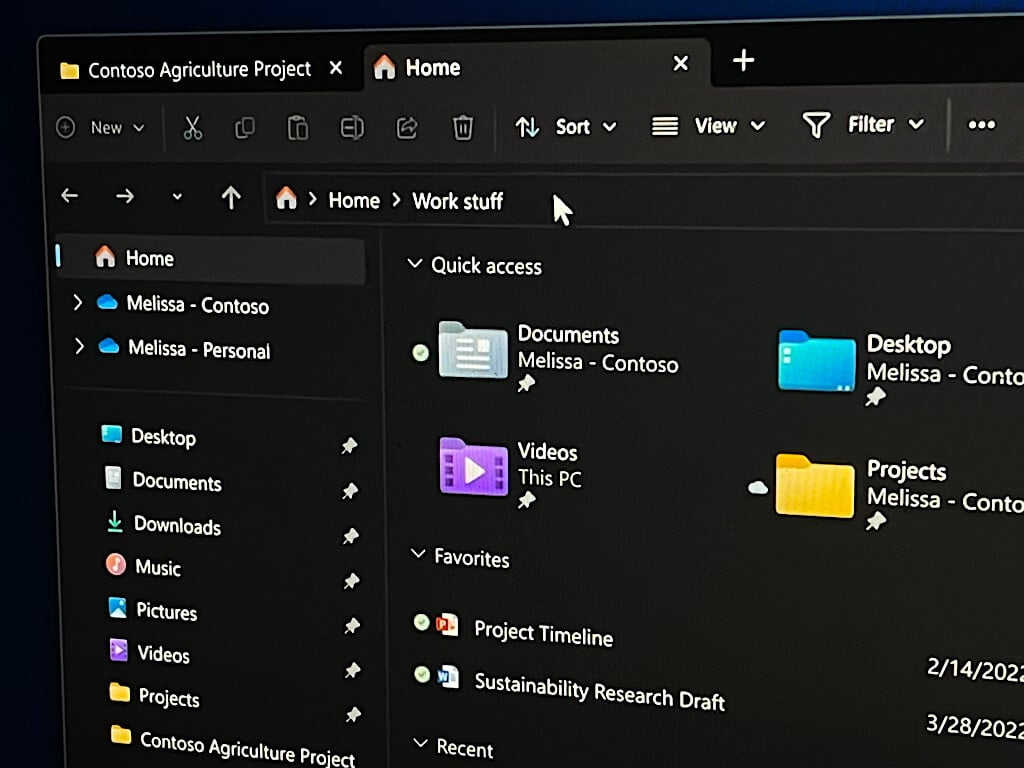 Microsoft is finally delivering on one of Windows 11's most anticipated features. Just released to the Dev Channel, Insider Preview build 25136 is adding File Explorer Tabs, and some navigation updates to Windows 11.

Just as Microsoft teased during its last Windows Powers the Future of Hybrid Work event, Tabs in File Explorer are designed to help you work across multiple locations simultaneously. The tabs can be found in the title bar and give you quick access to your favorite content.

It seems to be in the A/B testing phase at moment though. Microsoft says that they're just rolling out the feature, and it won't be available to all Insiders in the Dev Channel just yet. This is so that they can monitor feedback on the feature.

In addition to the tabbed experience, Microsoft's also refreshed the layout of the left navigation pane. It's now easier to navigate to folders that matter to you. Here's what the company says:

The updated organization provides easy access to your pinned and frequently used folders (Quick access) and your OneDrive cloud profiles added to Windows. OneDrive cloud profiles reflect the user’s name associated with the account. Known Windows folders which are available by default in the navigation pane are no longer displayed under This PC to keep that view focused for your PC’s drives. When you navigate to folders syncing to OneDrive such as Documents, Pictures, etc., the address bar displays the correct path to help bring clarity when your folders are on the cloud vs when they are local to you. Interestingly enough, a second new feature in this build relates to Widgets. Microsoft's trying out Dynamic Widgets content on the taskbar, so in addition to seeing live content from the weather widget, you'll also be able to see updates about sports and finance, as well as breaking news. Per Microsoft:

This should make it easier for you to know when something important happens related to these widgets and keep you informed of breaking news. The content is meant to be quick and glanceable with the ability to see more inside the widgets board if you click on it. However, if you don’t interact with the content update the taskbar will return to showing you the weather.

As usual, this build comes with other changes and improvements around input, taskbar, start, settings, and more. Check these out below.

As for known issues in this build, there are three big ones. First, Windows Insiders on Surface Pro X devices will hit a black screen attempting to resume from hibernate. Microsoft is also looking into a situation where the Mica material and Acrylic blur effect is not rendering correctly in OS surfaces like the Start menu, Notification Center, and other areas. Finally, Microsoft is investigating reports that shutting down via the Start menu isn’t working for some Insiders and is unexpectedly rebooting instead. The others are below.

This is definitely one of the biggest Dev Channel builds in a while! Happy downloading, Windows Insiders! And let us know what you think of the Tabs experience in File Explorer by dropping us a comment below.