Microsoft started rolling out the Windows 10 May 2020 Update last week, and as it has been the case in recent years, the company said that the major release would roll out gradually to all compatible devices. As of today, it seems that Microsoft is proceeding very carefully as even the company’s latest devices such as the Surface Pro 7 and the Surface Laptop 3 are unable to install the May 2020 update.

Indeed, the Windows 10 Health Dashboard currently indicates no less than 11 known issues for the May 2020 Update, and four of them have forced the company to put upgrade blocks in place. Here are the details about these four compatibility issues preventing many devices to install the update:

In addition to the aforementioned compatibility issues, Microsoft also recommends users to not manually install the Windows 10 May Update until it has fixed the following bugs:

Overall, that’s a lot of known issues for a new Windows 10 update, though this is certainly not unprecedented. As you may recall, the company had to delay the release of the October 2018 Update after discovering a file deletion bug. Still, the May 2020 Update has been in testing since February 2019, and the company didn't inform Insiders about these compatibility issues when it shipped them the latest bits last month before the public release.

Again, if you're currently not able to install the May 2020 Update via Windows Update, it's probably better to not install it manually using official ISOs or the Media Creation Tool. Windows Update should tell you when the update is ready for your PC, and in the meantime, you should see the following message explaining that "your device isn't quite ready for it." 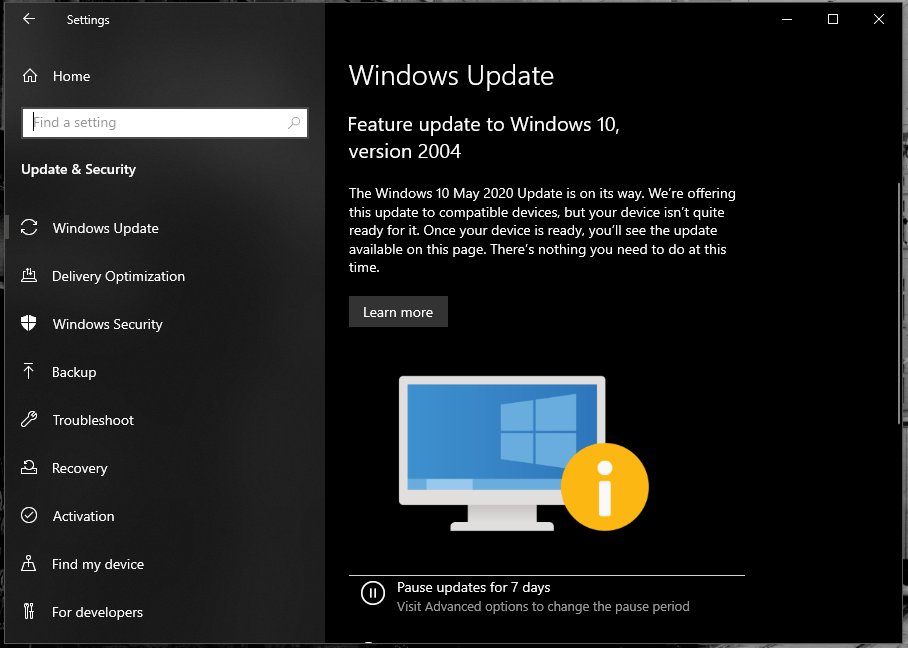 The Windows 10 May 2020 Update brings several new features including a new Cortana app, the Windows Subsystem for Linux 2 (WSL2), as well as Bluetooth pairing improvements. It's a solid update overall, though you may have to wait a couple of weeks before being able to install it without problems. Let us know in the comments if you're one of the few lucky people that saw the May 2020 Update waiting for your in Windows Update.