It finally happened, Microsoft revealed today the dual-screen Surface device it has been working on for many years. This new product is named Surface Neo, and it’s really unlike any other Surface device we’ve ever seen. Microsoft says that it will use the thinnest LCD ever created, protected by a Gorilla Glass screen and the full device will weigh 654 grams.

Surface Neo will also come with a 360° hinge, and a detachable that attaches magnetically to the device and charge wirelessly. Interestingly, Surface Neo will be powered by an Intel Lakefield processor, which is a new hybrid processor created for dual screen devices. Microsoft didn’t share details about performance or battery life, or LTE connectivity, but we hope choosing an x86 processor over an ARM one is for the best. 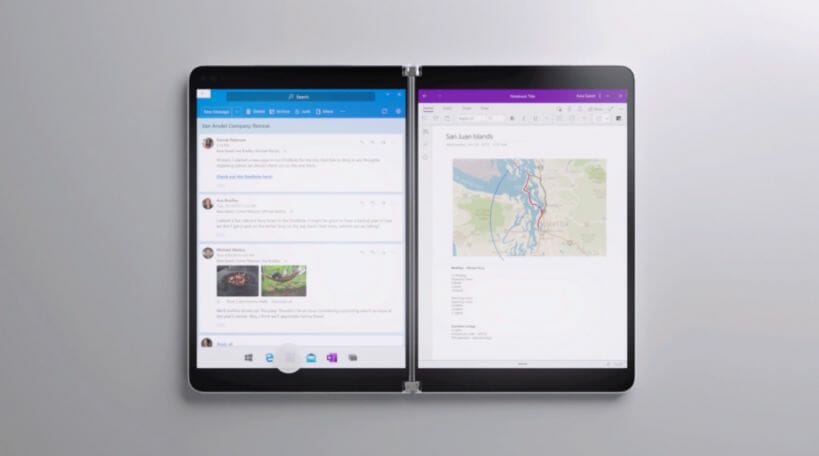 As a dual screen device, Surface Neo will allow users to do some unique things such as running two apps side by side, or extending a single app across two screens: Microsoft is calling this “spanning.” Apps will launch on one screen, but you can span them across the other screen by dragging them around the hinge.

It’s not clear yet if this will work will all apps around the box, or if developers will need to have some work to support spanning in their apps. Anyway, Microsoft said today that Surface Neo will support all Windows apps including Office, and that’s probably why Microsoft chose an Intel processor for this new form factor. 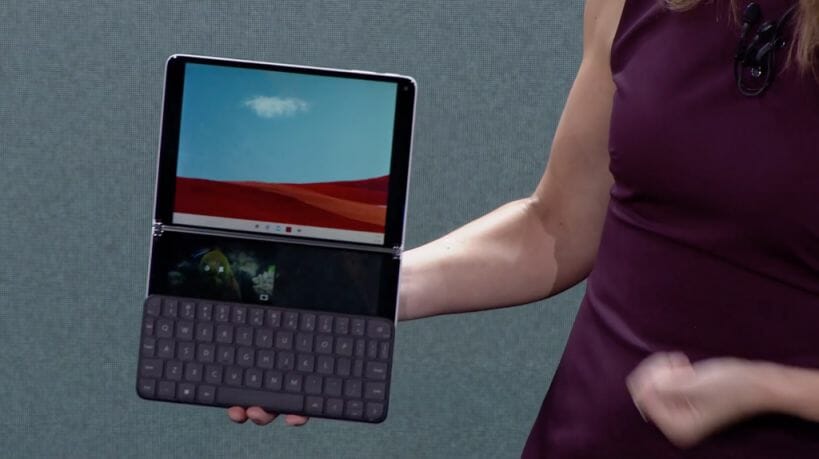 Spanning is one of the new features made possible by Windows 10X, a new version of Windows 10 build for dual screen devices. Microsoft demoed other cool features today such as the WonderBar, which will appear when the Surface Neo keyboard is attached to one of the screens. The WonderBar is like a MacBook Pro Touch Bar on steroids, which can be used as a trackpad, display emoji shortcuts, provide inking functionality (the device will work with the new Surface Slim Pen that will attach magnetically to the Surface Neo), and also work like a small second screen for watching videos while working on a document on the other screen.

Windows 10X also handles rotation quite beautifully, and it generally seems pretty intuitive. As an example, when you have the Mail app on the left screen and click on a link in an email, the web page will open in a browser window on the other screen. It’s not clear yet what’s the maximum number of apps you can display on the two screens, and there are many other details we don’t know yet including battery life, memory, and pricing. 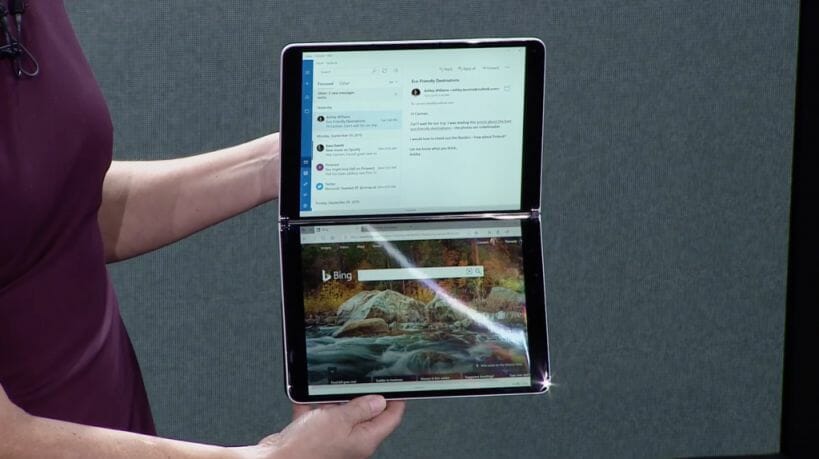 Microsoft said today that Surface Neo will start shipping on holiday 2020, so the company still has plenty of time to work on the software and maybe make some hardware improvements. Still, the device we’ve seen today was really impressive, and we’re glad to see that Panos Panay and his team can still deliver some breakthrough innovations.