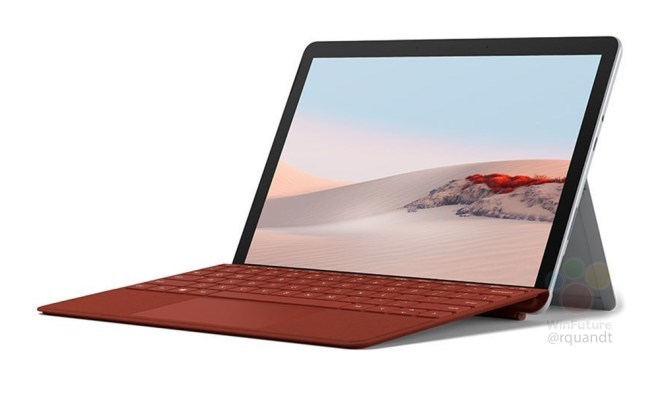 Microsoft is rumoured to announce its much-anticipated Surface Go 2 and Surface Book 3 devices during a Surface event soon, and a recent FCC filing revealed some specifications over the weekend. However, as it happens our colleagues at WinFuture spotted marketing renders of the upcoming second-gen Surface Go device.

This is our first look at the new Microsoft Surface Go 2. Looks much better with the slightly larger screen and therefor smaller bezels #SurfaceGo2: https://t.co/qkrpaXFTVI

If it holds up to be true, the render suggests that the Surface Go 2 would feature a 10.5 inches display with narrower bezels. Interestingly, the new keyboard comes with four colours (Poppy Red, Platinum, Ice Blue, and Black). The device would be powered either by an Intel Core m3-8100Y processor or Intel Pentium Gold 4425Y along with up to 8 GB of RAM and up to 256 GB storage.

As for the design changes, WinFuture noted that they likely remain unchanged on the outside. However, the slightly narrower edges would eliminate a minor defect in the original Surface Go tablet.

Microsoft’s Pentium Gold version of Surface Go 2 device paired with 4 GB of RAM is expected to be available at most major outlets and Microsoft Store with prices starting at $498, while the high-end variant with 128 GB storage could cost $682. Of course, whether or not any of this is true remains to be seen, but it shouldn't be long before Microsoft officially announces the new tablets.

Halo 2: Anniversary will join Halo: MCC on PC on May 12