Steve Jobs created the iPhone because he hated a guy at Microsoft, Scott Forstall says 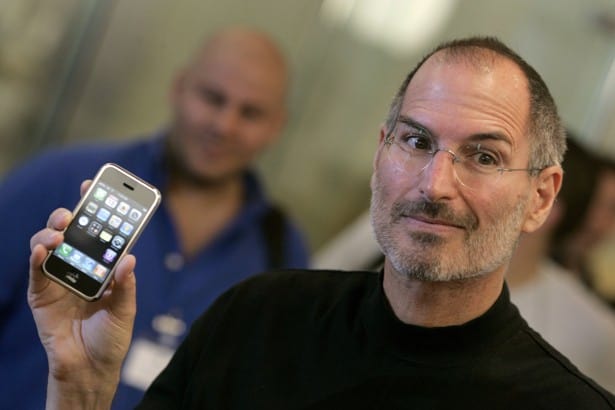 This year, the iPhone will celebrate its 10th anniversary and it’s safe to say that expectations for the new model are really high. For a long time, the iPhone was considered as the gold standard for other smartphone manufacturers to aspire to, but Samsung has since raised the bar with its borderless Galaxy S8. Indeed, this premium Android phone looks so good that even Microsoft is now selling in its US stores.

The iPhone may no longer be the king of smartphones it once was, but it’s still an incredible business for Apple, a company that used to be known for its iPods and Mac computers. Back in 2007, no one could expect that the iPhone would become Apple’s most profitable product, and certainly not former Microsoft CEO Steve Ballmer, who literally laughed at its $500 initial price point.

How Apple came up with the iPhone is already a well-known story: Steve Jobs originally wanted to create a touch-based tablet, and it took quite some time for the company years to come up with a working prototype. However, after becoming increasingly frustrated with the clunky interfaces of smartphones from the early 2000’s, Steve Jobs decided to put the tablet prototype on the shelf but reuse its multitouch technology to create a smartphone.

Jobs obviously had the right intuition at the time (the iPad never became as successful as the iPhone), but to this day we didn’t really know how Apple became interested in touch-based tablets (and later smartphones) in the first place. Scott Forstall, former SVP of iOS Software at Apple finally revealed the truth during an event at the Computer History Museum in Mountain View, California yesterday (via Mashable).

This was Forstall’s first public appearance following his much-talked about departure from Apple five years ago (Forstall was the man behind the terrible Apple Maps app that shipped with iOS 6). During the lengthy interview, the former exec shared that Apple’s first touchscreen prototype was actually the result of a disagreement Steve Jobs had with an unnamed Microsoft exec (the segment starts at 1h30):

Steve Jobs created the iPhone because he hated a guy at Microsoft, Scott Forstall says

This year, the iPhone will celebrate its 10th anniversary and it's safe to say that expectations for the new model are really high. For a long time, the iPhone was considered as the gold standard for other smartphone manufacturers to aspire to, but Samsung has since raised the bar with its borderles

“It began because Steve hated this guy at Microsoft,” Forstall said. “Any time Steve had any interaction with the guy, he’d come back pissed off.” If you’re wondering what the unnamed exec did to annoy Steve Jobs, Forstall explained that the guy was bragging about Microsoft’s developing an innovative tablet platform based on stylus interactions. “He just shoved it in Steve’s face — the way they were going to rule the world with their new tablets with their pens,” explained Forstall. “He came in on Monday with a set of expletives and then was like ‘let’s show them how it’s really done.’ ”

According to Forstall, Jobs had quite a poor opinion of this tablet prototype from Microsoft: it used a resistive touch screen, which are clearly inferior than the capacitive touch screens you now see everywhere. But more importantly, Steve Jobs hated styluses. “You don’t use a stylus… we’re born with ten styluses,” Jobs once told Forstall.

It took some time for Apple to develop a working prototype of a multitouch display, but Jobs quickly saw that this technological breakthrough would be much more useful on a phone. “Steve saw it and said ‘put the tablet on hold, let’s build a phone.’ And that’s what we did,” said Forstall.

It’s quite ironic to see that a Microsoft exec is in some way responsible for Apple’s most successful product ever. It took years for Microsoft to come up with a response with Windows Phone 7, but we all know how it turned out. Fortunately, it seems that it’s now Microsoft’s turn to out-innovate Apple in tablets, even though Surface tablets will probably never bring as much profit for Microsoft as iPhones do for Apple.