State of Decay 2 released to a mixed bag of reviews, with many gamers citing bugs, glitches, and a repetitive gameplay as negatives for the blended RPG/Sim game.

Seemingly in an effort to address critics’ complaints, the game studio Dead Labs recently released a 20GB patch for SoD2 that resolved a majority of core game mechanic shortcomings and probably helped push the total number of players cross the 3 million mark, two months since release.

Now Dead Labs is set to give those 3 million players some additional content to consume over the 4th of July holiday in the US.

In advance of the 4th of July holiday, we are celebrating that the State of Decay 2 community now exceeds three million players. This, along with the recent news that fans made State of Decay 2 the best-selling game of May, puts us in a festive mood. To celebrate, we are revealing our first post-launch content, the Independence Pack. This pack gives you the opportunity to take on the zombie horde with style, grace and most importantly, colorful gunpowder. Available today on both Xbox One and Windows 10, the pack unlocks an array of fiery new versions of vehicles, weapons and gear for your community. State of Decay 2 wants you to show off with explosive awesomeness to the three million player strong community. Heck, even the zeds are dressed for the occasion in this pack, and there are few things as satisfying as taking out a Revolutionary War-themed zombie during a supply run. It’s like history that you can blow up…with fireworks!

The Independence Pack is an over-the-top visually themed extravaganza that includes, souped-up vehicles with attached flamethrowers, sparklers, and custom caging to support more vehicular zombie killing as well as new handheld and over the shoulder fireworks cannons for close quarter combat.

The new tools can be crafted using the new Fireworks Crafting Station facility mod to customize more creative uses of fireworks to weapons, or gamers could just buy new explosives from a “traditional fireworks sales.” 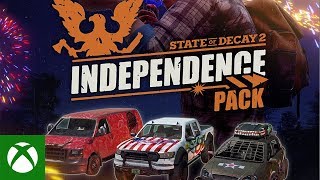 State of Decay 2 released to a mixed bag of reviews, with many gamers citing bugs, glitches, and a repetitive gameplay as negatives for the blended RPG/Sim game. Seemingly in an effort to address critics' complaints, the game studio Dead Labs recently released a 20GB patch for SoD2 that resolved a m

Unfortunately, for some, the Independence Pack isn’t free but will run at a moderate price of $4.99. For gamers who purchased the more expensive SoD2 Ultimate Edition upfront, the expansion pack will be free.

The Independence Pack isn’t the only new thing coming to SoD2 as Dead Labs also packed 20 new free missions, 10 new weapons, and a “Rare Books” trader for new skills in its giant 2.0 update released a few weeks ago.

SoD2 Ultimate Edition owners will also be getting a new mod following the Independence Pack, that offers new gameplay as a well equipped Red Talon soldier on a mission to hunt zombies in the Daybreak Pack coming out sometime in September.

That all-new content lets you take the fight to the zombies, featuring an exciting new mode where you play as a well-equipped Red Talon soldier. You’ll work to complete a challenging objective while protecting your fortified position against waves of zombies and freaks to earn new rewards and weapons. The Daybreak Pack is also included in State of Decay 2’s Ultimate Edition.

While SoD2 has been criticized for what seemed like a mixed marketing message of AAA backed studio quality for an indie game release, Dead Labs along with Microsoft’s support looks to be giving gamers every cent worth of gameplay possible at varying price points. With the upcoming DLCs and overall patchwork, SoD2 is becoming every bit of the indie phenomenon it was originally billed as, as well working its way towards impressive AAA gameplay.