It has been the source of much speculation of late, and it looks like we may finally, at long last, “very soon” know when we’ll get our hands on Starfield. At least, that’s according to Bethesda’s Latin America Instagram account, BethesdaLATAM.

As reported by PCGamesN, the account shared a post stating that “very soon we will announce it.” The post was a response from a user inquiring about a release date for the game. 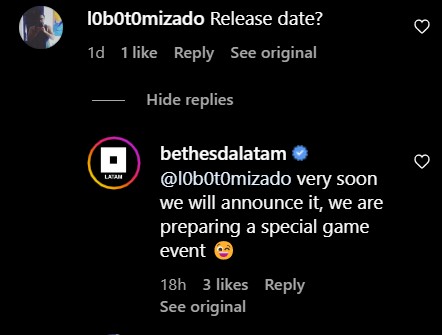 Adding more fuel to the speculation is that fact that the game’s release date on Steam was recently changed from “2023” to “coming soon.” Though this doesn’t give us a whole lot to go on, it would seem to bolster the idea that an official release date is very imminent.

Xbox and Bethesda will livestream a Developer_Direct event next week on January 25th. During this event Minecraft Legends, Forza Motorsport and Redfall will be showcased, with a special Elder Scrolls Online event following. It is likely that release dates for Forza Motorsport and Redfall will be unveiled. A dedicated showcase event for Starfield will follow, though the broadcast date for this is thus far unannounced.

Check out the new games coming to Xbox next week, January 23-27